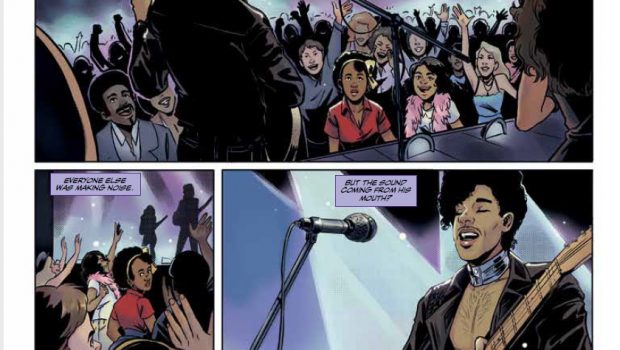 Summary: If you are into Prince or want to know more about the scene he inspired I would recommend this story.

On the trail of the Purple One

This graphic novel tells the story of the fictional Minneapolis band Starchild whose founder was inspired by seeing Prince to enter the music scene. Although things do not work out for them it shows one example of how Prince inspired other bands and sometimes took them under his wing to give them a leg up to their own success.

It does not shy away from the fact that some people did not want to do what Prince wanted them to or they were pushed out but in all it is a love letter to Prince and his music and all that her inspired.

While it is a bit of an ask to take a punt on a story about a fictional band, the story is told well and it does seem like this band could have existed at some point.

The artwork is great in it and I liked the different costumes that the bands wore including the ones Prince gave them when he wanted them to “turn into butterflies”. Haven taken a large amount of photos of live music they certainly have done their research and it all looks very realistic, but also well depicted on the page and more suited to this format.

I would recommend this one if you want to know more about the music of this era and the general scene around the time Prince was inspiring bands in Minneapolis.