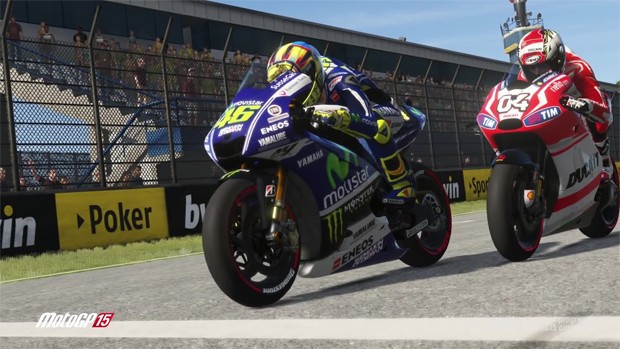 9th July 2015, Sydney – Milestone s.r.l., one of the world’s leading developers and publishers specialising in the racing genre, announces that MotoGP™15 is now available in stores. The game is now playable on PlayStation®4, Xbox One, the all-in-one games and entertainment system, Windows PC,  PlayStation®3 and Xbox 360.

Starting from today, the amazing DLC MotoGP™15 4-Stroke Champions and Events* is available for purchase. It includes the Champions of 4-Stroke Bikes that have made the history of the MotoGP™, plus 18 Special Events for a full charged adrenaline experience. The aim? Relive the best moment of Rossi, Capirossi, Biaggi, Stoner, Xaus, Hopkins, Gibernau and much, much more.

The new features of MotoGP™15 are: Private Team, GP Credits, Customization and the brand new game mode Beat the Time and Real Events 2014.

The first step is to create your own rider (name, face and principal physical characteristics) for becoming a World Champion. You’ll start racing as a Wild Card and subsequently you’ll be able to negotiate your future career by choosing one of the official teams participating in the 2015 championship, or choosing sponsors to race with your own Private Team, taking to the track alongside the existing teams. Negotiations hinge on your performance during races, meaning your customisation options and resulting appearance are directly linked to your in-game objectives. The private team doesn’t exclude the chance to race with the Official ones and then come back to your own. The aim is always the same. Win the World Champion Title.

The GP Credits represent the virtual currency available in MotoGP™15. You can earn them into the career mode once you reach some of the objectives proposed by teams and sponsors. After having collected a specific amount of GP Credits it will be possible to buy 40 different liveries with official colour schemes and more than 20 bike models across 3 classes, MotoGP™, Moto2™ and Moto3™,   that will increase the customization possibilities of your Private Team and enrich your own garage.

One of the standout features of this new chapter dedicated to the motorcycle world championship season – a defining characteristic of the 2015 edition of the official videogame of the MotoGP™ – is bike, rider, and team customisation, with more than 100 accessories available for purchase. Bike: choose from more than 20 bike models across 3 classes, MotoGP™, Moto2™ and Moto3™, choose from 40 different liveries with official colour schemes, and consider offers from the main sponsors to accept their sponsorship during races. Rider: change the colour scheme of your leathers to match your bike, buy boots and gloves and choose your rider’s face. Motorhome: transform your game experience with 3 different motorhomes (Basic, Mid-Range and Top-Range), so your avatar can live in a manner befitting to their level of stardom.

ARE YOU READY TO BEAT THE TIME?

In this compelling new race players are assigned a specific bike on a specific circuit. Riders from the different classes featured in the game have set records on that circuit and on that bike. Your aim is to beat that record.

Other new features for MotoGP™15 include the introduction of the two-stroke bikes that made MotoGP™ history, all the teams, riders and bikes from the 2015 season, and Real Events from the 2014 season, for a complete experience that is unique in its genre. After the success in 2014, we see the return of the Real Events game mode. This amazing Mode offers the chance to relive more than 50 events selected from the most thrilling and challenging moments in the last season. Take control of the situation and redesign the history to achieve a specific target set by the system.