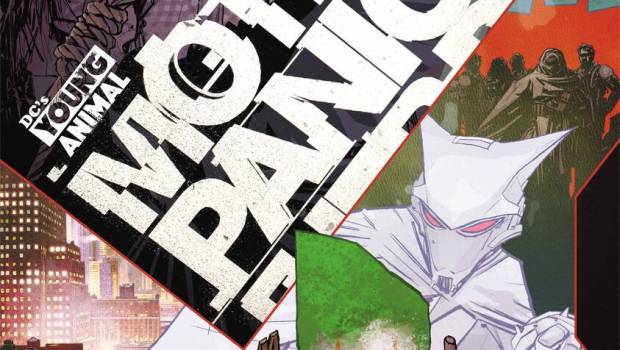 Summary: A darker tone and theme.

Mother Panic is published under DC’s Young Animal imprint and is targeted at more mature readers.  It definitely does not have an all ages feel.  The book takes place in Gotham, but has its own identity separate from Batman.  There are definitely areas of overlap, and this book itself takes place in a future in which Batman has retired or vanished.  I like that it acknowledges the Batman mythos, and rather than being chained by it, it grows from it.

The cameos of some Batman villains and the influences of others are also felt.  We see an insane young boy that is clearly influenced by the worst aspects of the Joker.  Lord Robin, the last of the Robin’s and self-styled savior of Gotham.  As well, the villains Scarecrow and Mister Freeze also make appearances. 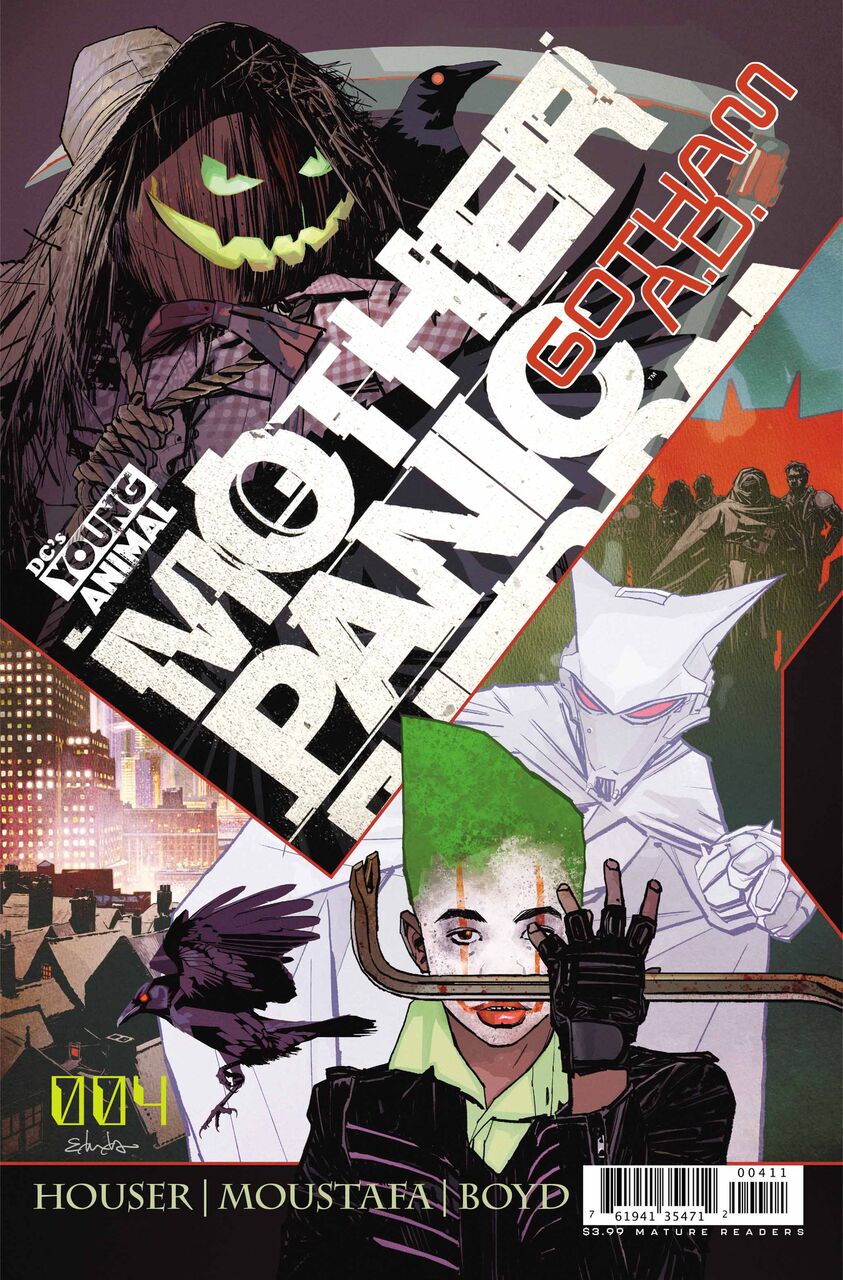 The story begins with Violet Paige, a.k.a. Mother Panic, reappearing in the society pages in gossip rags and newspapers as well as on tabloid journalism shows.  She is intent on reclaiming her share of the family fortune while operating as a vigilante from the shadows.  To be honest it has a sort of Batman Begins feel to it, and I loved that film.

Lord Robin appears as the villain that claims to be destroying a city to save it.  He intends to be the second coming of Batman yet is the one that unleashes terror upon it.  Essentially trying to create a fake villain that he can take the accolades for defeating.  He is the one in league with Scarecrow, and together they release the deranged child-Joker on the city.

The latter part of the issue focuses on a fight between Mother Panic and her sidekick, Fennec Fox, as they take on the Scarecrow and this child-Joker.  Mother Panic is constantly pulling her punches throughout the battle, unwilling to hurt a child.  Her sidekick on the other hand, has no compunction against injuring her opponents.

This book is very well written.  Jody Houser gives each of her characters a unique voice, and makes these flawed individuals compelling.  The book is well paced and doesn’t suffer for being several issues into a story arc. 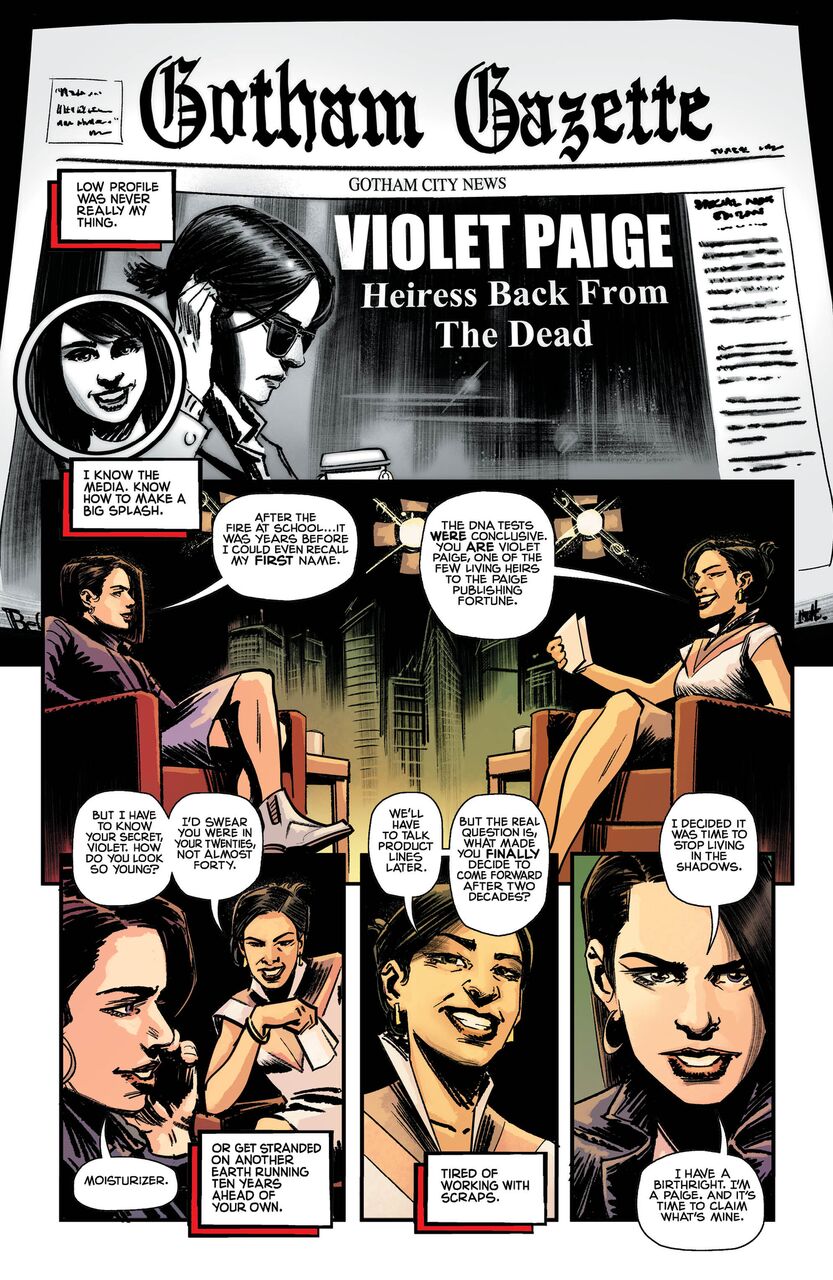 Ibrahim Moustafa handles the interior art in this issue.  The book does have some call-backs to Batman, mostly with some of the Batman characters included, but Moustafa makes this iteration of Gotham his own.  The city itself is less oppressive, allowing the actions of the villains to do the leg work.  This is a city that has clearly painted over a lot of the warts under the surface.  It also makes the villains stand out a bit more and as a result appear more menacing.

The cover is done by Tommy Lee Edwards and does a good job of highlighting what will be found inside.  Scarecrow and the child-Joker are the two figures that immediately draw your attention.  Scarecrow appears more as a Jack O’ Lantern headed scarecrow that one might find in a horror movie, significantly scarier than the behavior of the character in the book.  The child-Joker on the other hand, is a lot less scary than he is inside the book.  The cover gives a good highlight of what will be found inside. 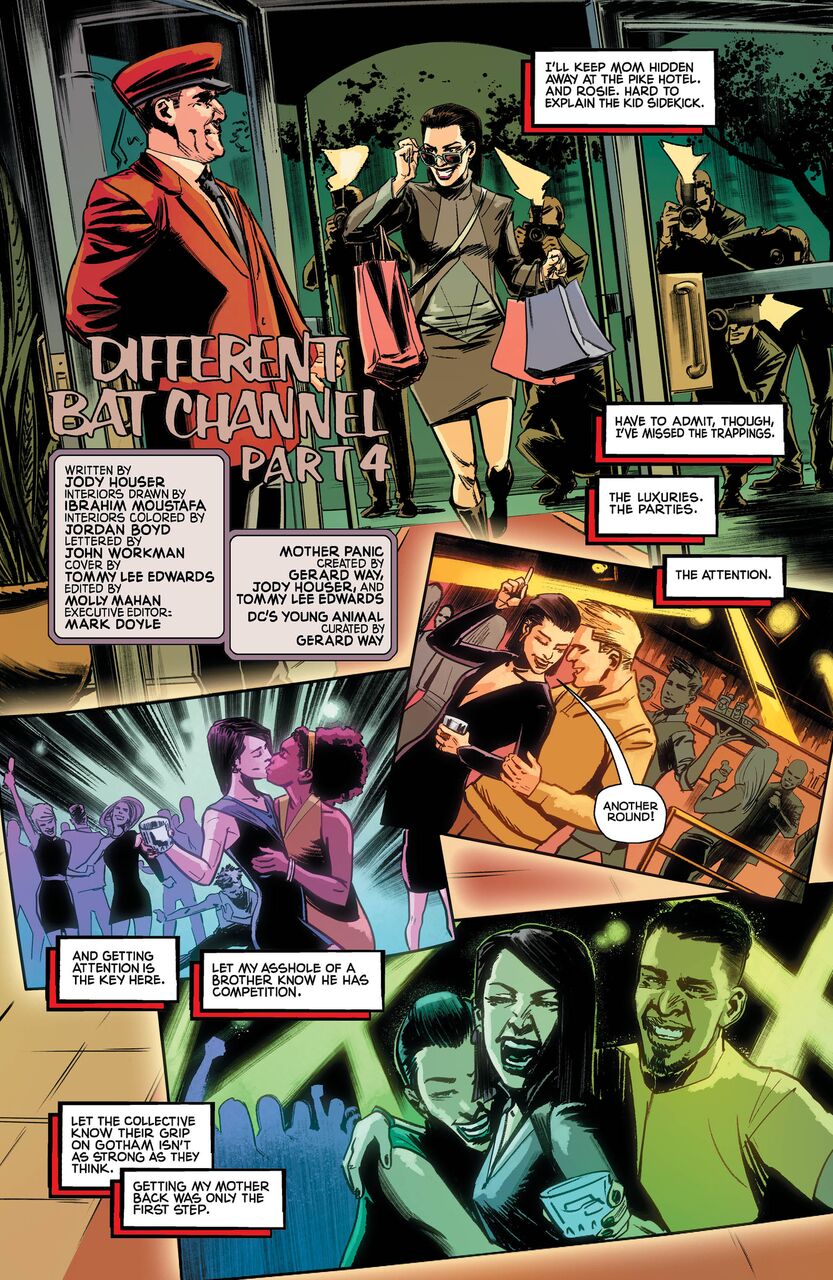 Overall this was a really good book.  As it is aimed at mature readers it does have a darker tone and explores darker themes than a typical DC book.  It is well paced, and the art does set a good tone and support the story well.  It’s also accessible.  I had no trouble following and keeping up with the story, even though this issue is the fourth book in the current arc.  Mother Panic acts as this time’s Batman, the vigilante striking fear into the heart of criminals, and to me has some parallels to Christian Bale’s portrayal of Batman from the Batman Begins series.  I enjoyed the inclusion of a few old Batman villains and loved that the true villain appears to be one of the last Robin’s to serve under Batman. 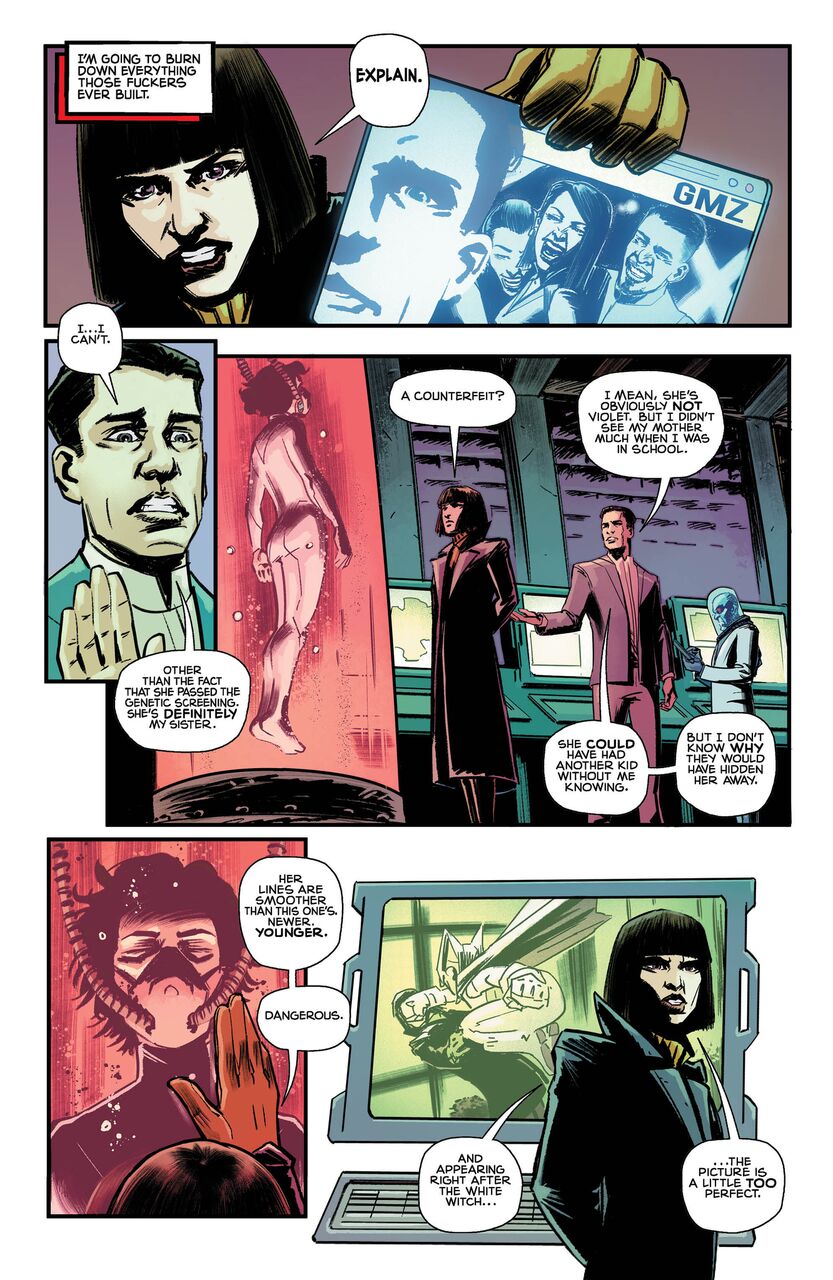 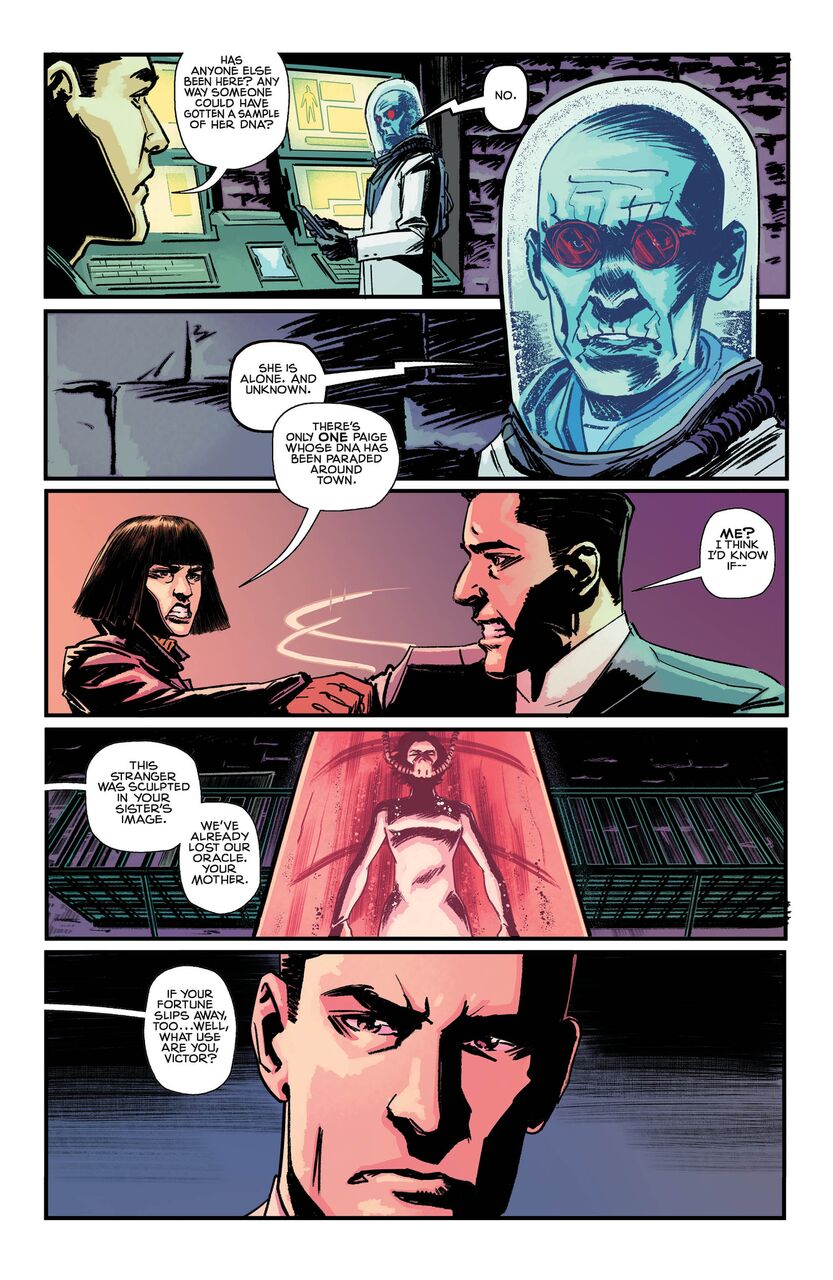