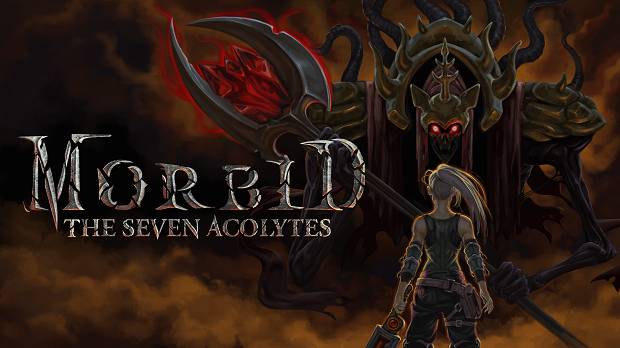 Summary: Morbid struggles with an identity crisis of sorts. Trying to find its own place among the rising tide of souls-like games of recent times.

Morbid: The Seven Acolytes, is a horrorpunk action RPG, teeming with Lovecraftian horrors and Cronenbergian gore. If you have a weak stomach, can’t stand the sight of blood, guts, gore and more. Then this game isn’t for you. Another title in the ever growing category of Souls-like games in recent years. The difficulty of this game, isn’t anything for any true Souls veteran to write home about. But alas, I am far from it. 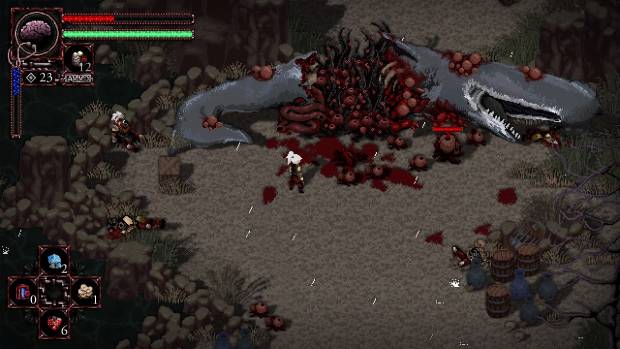 You are the last surviving Striver of Dibrom and your duty, of which you have trained your entire life for. Is to slay the Seven Acolytes; accursed, mighty beings, possessed by malevolent deities called Gahars.

The Gahars have bound themselves to the acolytes as they cannot exist in the mortal plane without hosts. By slaying the acolytes, you ride the Gahars of their flesh, where they will cease to exist.

If you succeed, you’ll free the kingdom from their reign of terror. Fail and you will doom the realm to their malicious rule for eternity.

Challenging foes, mini-bosses, mighty weapons all await you within. Do you dare face the blood and gore? 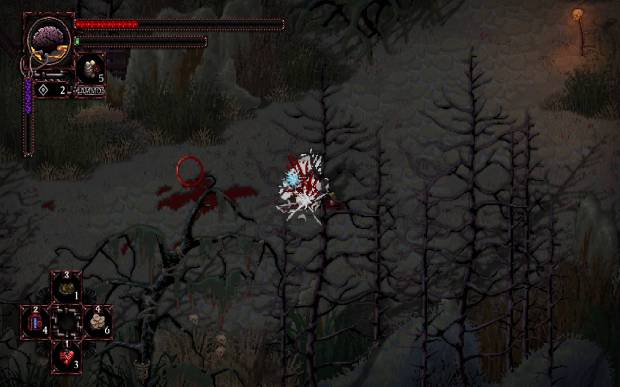 Morbid, favours simple, yet tried and true controls. Meaning the game is very easy to pick up and play. Though newcomers to the souls-like scene should approach with caution as the initial difficulty might seem overwhelming. The lack of a proper tutorial might scare these guys away, but I implore you. Dive in a little deeper and give the game a chance.

The game gives it’s tutorial through cheeky pages notes as if torn from a book. Preferring instead for the player to learn through trial and error mostly. This is not a bad method because the game doesn’t punish you for failing. True souls-like games, tend to strip you of your experience and currency when you die, with a small penalty to durability. Wherein you have to make your way to your death location to reclaim it all. Which can be tricky. Worst still, some even strip chunks off your max health, per death.

In Morbid, when you die, you simply return to the start of the level. You keep all the gear you’ve found, all the exp you’ve earned and all the items you’ve collected until this point. It even grants a few free healing potions each death. It’s a much less punishing and thus already a more enticing and appealing mechanic to non-souls players like myself. Though this might dull the edge for the veteran family. 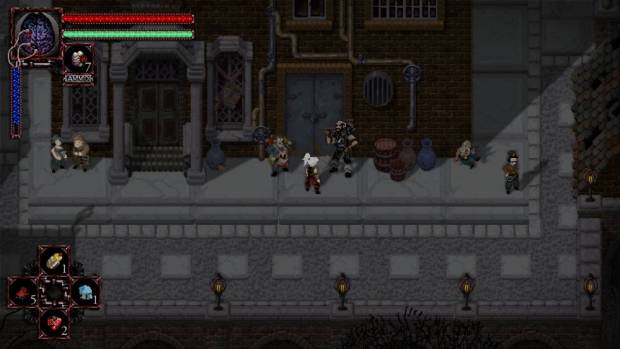 Sanity works completely opposite to how you’d expect. Empowering you as you go insane, but plaguing with spectres

Weapons are nice and simple too, one melee, one ranged. Your melee can vary between clubs, swords, spears and fists. Each have their own pros and cons, some swords are fast and can get many hits in. But they’re weak and barely make a scratch. Greatswords are much higher power, but a lot slower, leaving you open to counters and interruptions. Spears have reach and speed, but lack overall power.

Morbid brings guns to these knife fights too. Same logic applies here, some shoot faster but less damage, the rest fire slower but can devastate foes from a distance. Ammo is scarce though and runs out very quickly. There are also modifiers in the way of runes. Apply these runes for simple but effective buffs, ranging from; elemental damages, to attack speed and drain hp/sanity from foes.

Oh right, I forgot to mention Morbid has a sanity meter. What does this do exactly? Well it directly affects the damage you deal/take, how much exp you earn and how many spectres you will face. The game doesn’t really explain how sanity works properly. Merely stating it’s affects. One could safely assume that it would be negative effects right? Well, surprisingly you’re wrong. As sanity drains, your damage dealt increases, damage taken is reduced and exp gains are also increased.

This has drawbacks though, as the spectres will spawn more frequently and you will no longer gain any exp at all until you defeat the spectres. It also covers the corners of the screen with purple veins, that obscures vision. Making ranged encounters a little more tricky. 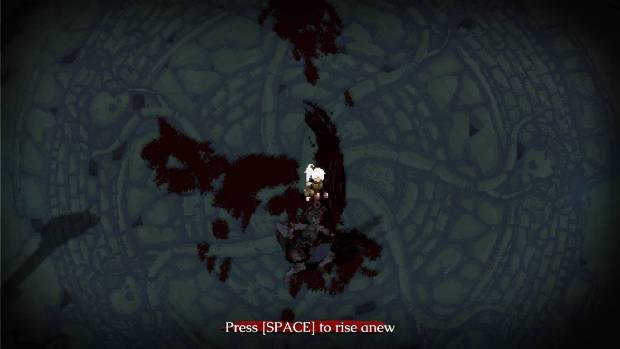 Morbid’s graphics are that of retro, 2D side scrollers. In that typical metroidvania style perfected and grown in popularity from the days of Castlevania. It’s not a style I have a particular like or dislike for, but it does the job well enough. Morbid also plays well visually on both smaller screen and larger screens alike. At least, I felt as such.

Visual effects were minimal, but their usage was apt for their intentions. When sanity drops below a certain level, purple pulsing veins appear on screen. This can get distracting or annoying after a while, but it makes you pay attention to your sanity levels. So it has the desired affect.

Character designs are a plenty, but they’re reused frequently. And newer areas just get reskinned versions that do little than to serve as a distraction or to frustrate the player with more fodder. This dulled me into a sense of cockiness on the odd occasion which led to one of my few deaths. Weapons are mostly the same, regular sword, big sword, spear, knuckles, etc. But there are a few unique weapons granted from defeating the acolytes themselves. Which is kinda neat, but not remarkable enough to have me forsake my slowly augmented quick stabbing greatsword.

Morbid has a fully orchestrated soundtrack, which wins back a few of the points lost in the graphical department. The music ranges from intense boss fight music, to curious exploration music, to eerie almost demonic, cathedral hymns and chants for the darker marshes and decrepit villages.

There’s no voice acting in Morbid, so a lot of the audio comes from the immersive sound track and the sounds of grunt, clangs and screeches. Most enemies have a unique sound to them, the bosses however are somethings else. The second boss in particular, mind you she’s swinging her innards around like a whip and she hits like a truck. She screeches like a banshee when you confront her, an earsplitting, spine chilling scream. The hairs on the back of my neck stood at attention.

Apart from this, the rest of the sound bites are unremarkable. You character has two noises, the ahhh of recover or the ughhh! of pain and death. It falls a bit flat. 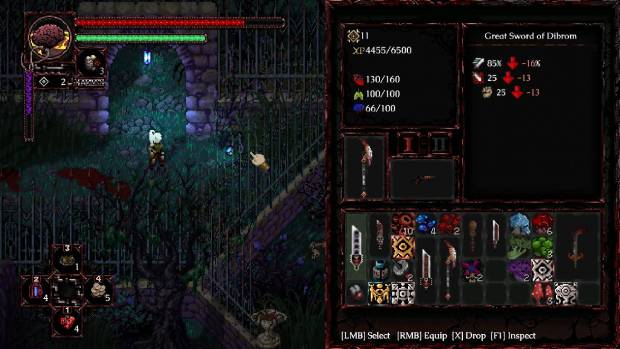 Morbid has a few interesting things going for it, but it’s trying be too much of a metroidvania, souls-like clone, with only a fraction of the substance these games have. Yes I give it some slack for being an indie release and yes, as a non souls player I personally enjoyed it. But I feel it’s target audience will simply give it a miss. I already have experienced souls-like buddies who’ve refused to touch it  for similar reasons.

In some ways, I feel like it tries too hard, but simply misses the mark. In other ways, it’s trying to distance itself from the genre plastered all over it. There’s hints at something good here, but crumbs will never satisfy the intense hunger of a souls player. There’s a pretty steep price tag to overcome too. Is Morbid a bad game? No, far from it. Is Morbid game of the year? Also no, it’ll simply fly under the radar as a game that contained fragments of true potential.

From a developer that I have already reviewed two of their previous releases; Vaporium which I rated pretty highly for a Steampunk dungeon crawler. And Crimson Keep, a complete miss, for a procedurally generated dungeon with punishing permadeath resets. Morbid sits in between with potential, but easily missed potential.

If you look at Morbid as its own entity, the game suddenly looks a lot better. Under the banner of souls like metroidvania, it falls far short of the margin required. I’d suggest waiting for a sale to snap it up.

All footage used was of my own playthrough, you can find my other articles right here 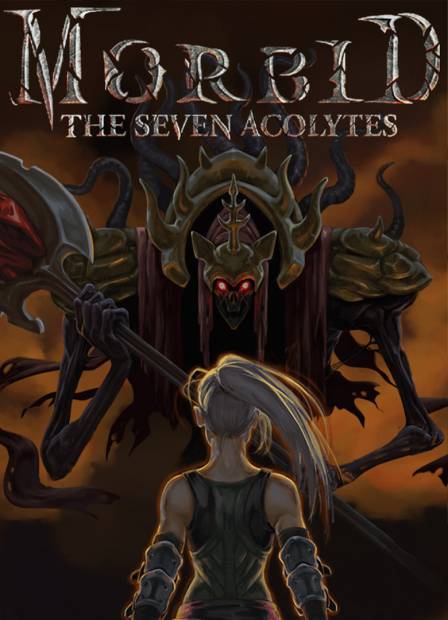