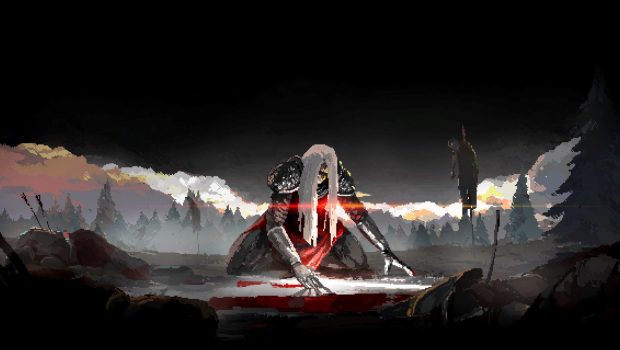 Summary: Moonscars is a good debut by Black Mermaid with some unique ideas and missed potential.

Moonscars is the debut game of Black Mermaid studio that tells the story of a knight named Grey Irma that wakens in the middle of a battlefield but doesn’t remember most of the things that happened. Moonscars is a mixture of Metroidvania and soul-like elements which makes a good and satisfying with some issues.

Once Irma is wakened and starts to find the answer to all her questions, the game will commence, and slowly and steadily players will be introduced to the harsh world of Moonscars, what happened to the protagonist, and who are all these random characters that we see in the game. 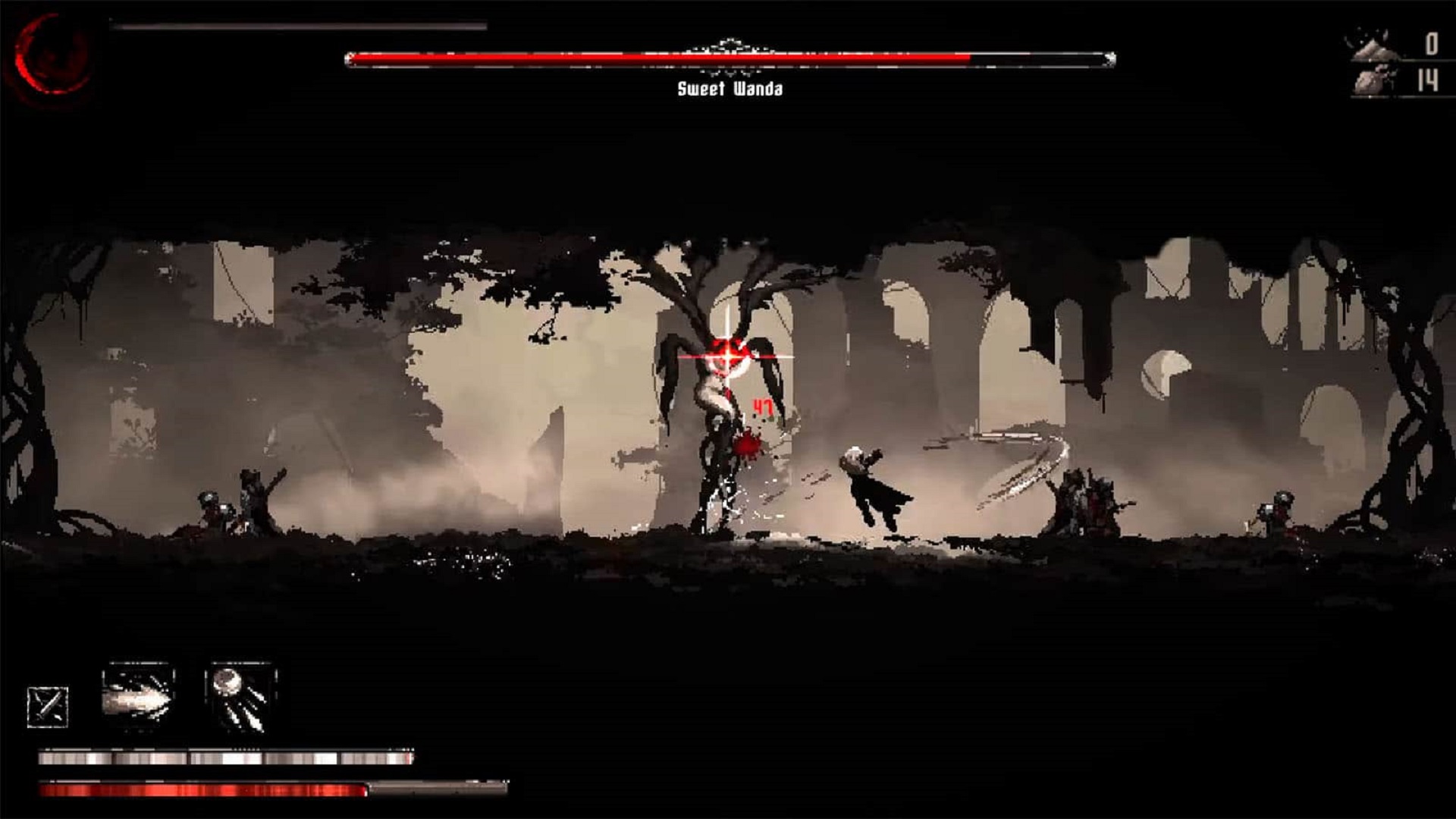 The story of Moonscars is not an easy one to digest and for the majority of the time does an amazing job to keep its grimy tune. But there are some minor issues when it comes to its narrative. While the story is told mostly with amazing dialogues, the lore of Moonscars isn’t rich enough. You can’t dive deep into the world of it to learn about how this building was made, what was it used for, or in the case of characters’ backgrounds.

The other issue with the narrative of Moonscars is that story is forgettable. There is not something very unique or a personal grip to attach to characters, and therefore the story will be forgotten after some time. But at least the pacing is good which makes the journey at the time playing pleasant.

Speaking of forgettable, the pixel art of Moonscars also suffers from the same issue. The art of the game is good and does help to create a creepy world but there isn’t anything unique about it that will be stuck in your mind forever, whether it’s the character design or environmental design. 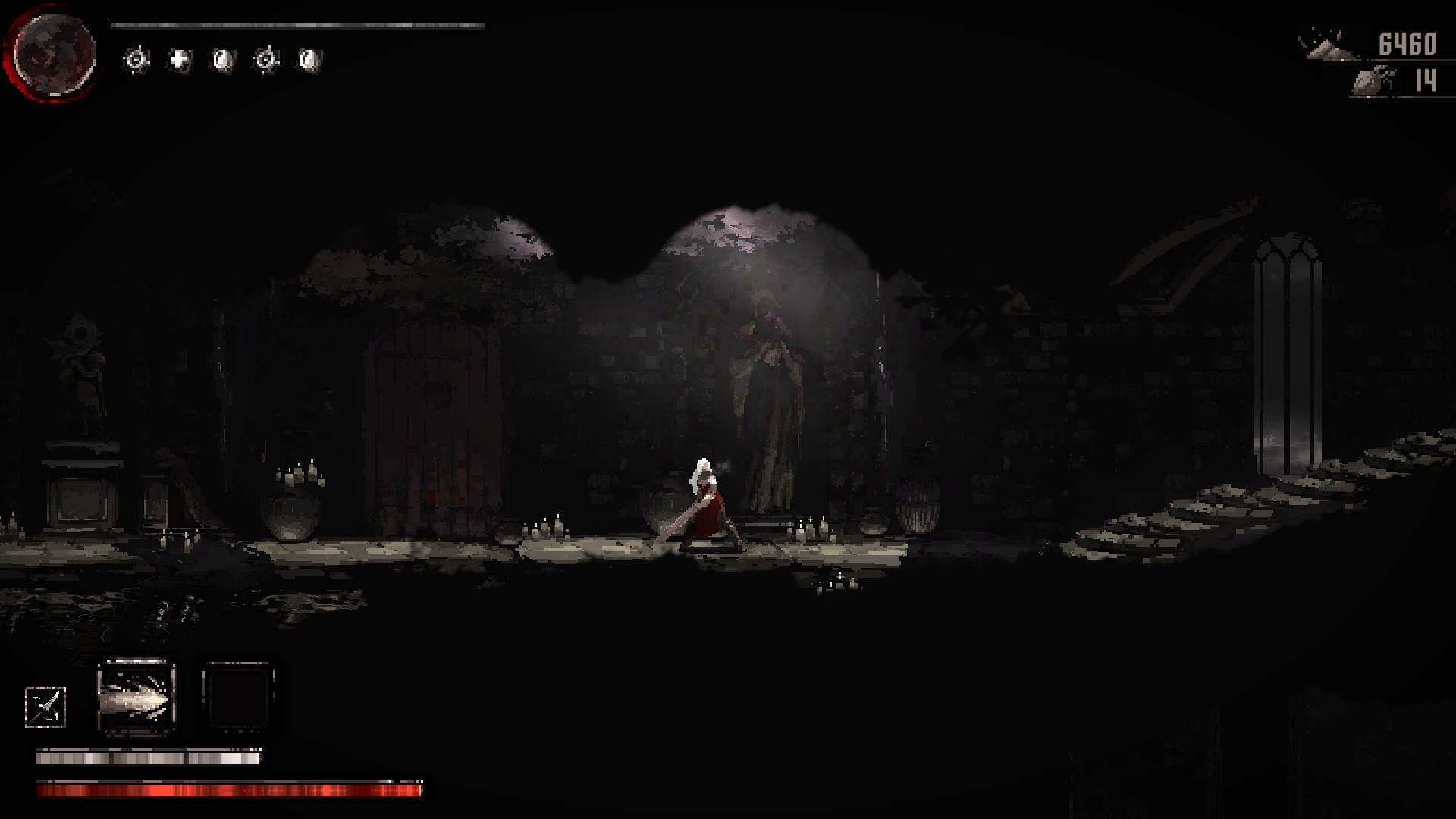 Meanwhile, players have to face many bloody and scary monsters in order to reach the creator of all this destruction, a person called Sculptor. The game will start pretty harsh on the player until you get the hang of each mechanism in the game.

Irma’s main weapon in the game is a longsword but she can get a secondary weapon as you get a little further into the game. The combat is simple yet engaging and satisfying. The only issue with it is the lack of movies. There is a strong blow, a normal blow, a secondary weapon, and a magical move, but the gameplay is designed in such a way that you can perform a mixture of all these moves and not get hit by the enemy.

In every corridor, you will face some type of enemy but most of the time you have to face more than two of them which makes it almost impossible to have a good freeflow combo. Yet the placement of enemies is in such a way to makes the game fun, even with some of its issues. 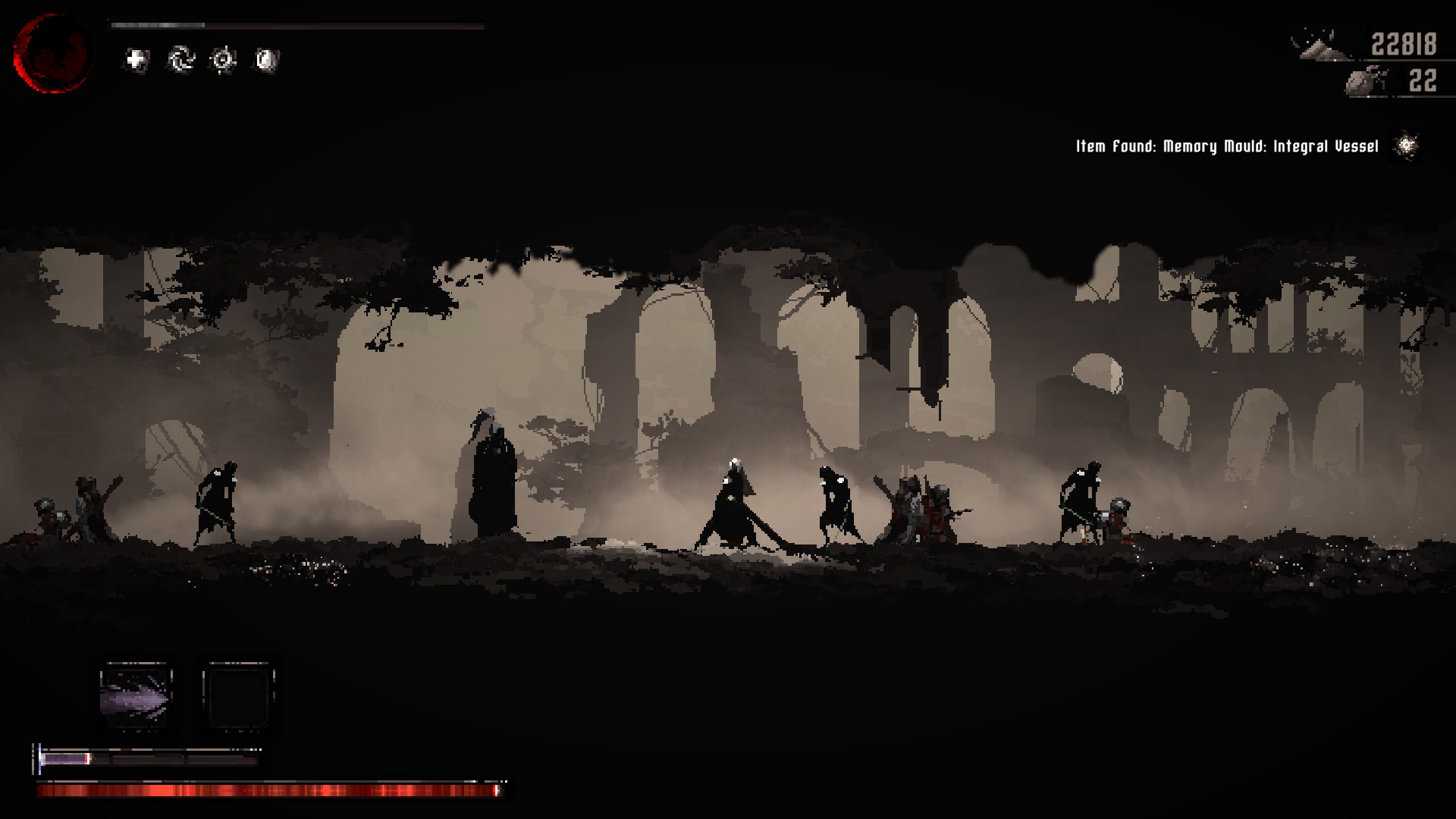 In the game, you can either dodge the attack or parry it, which is very hard. Each enemy has a different timing of their attack which makes parrying the most challenging mechanic of the game, but at the same time the most satisfying of them as well. Parrying the attack will lead to a counter-attack that has the most damage in the whole game.

You can also use magic in the game to deal damage or most importantly heal yourself. The balance of using magic could have been better since you can exploit the healing skill and avoid getting killed by enemies for a very long time.

As for the offensive magic, there is a large skill tree that you can use to level up and increase the damage of each magic skill. Even though the skill tree will seem overwhelming, you can actually play the game without unlocking any other magic skill, which is just frustrating and another potential not used properly in the game.

Moonscars differently has some unique and also dark ideas but only some of them are executed very well. The most important and probably the biggest missed opportunity of Moonscars is the level design and art of the game in general.

Most of the game takes place in a large castle while the ruins in front of it serve as a prologue to the main events. After a while, you will get a sense that you’re merely repeating everything you did in the past hours only to understand the story better and reach the final destination.

Not only in the case of level design but also in enemy designs. The types of enemies you face in the game have nothing unique to it, you have seen all of them with small challenges in other games. There are the normal enemies, the ones that rush toward you, the big enemies with shields, and the ones that throw projectiles.

Fortunately, the placement of each enemy in a corridor is done masterfully so you won’t feel like you are just playing the same level over and over again. As for the boss fights the scenario differs. While the movement and attacks of boss fights aren’t unique but the rhythm and pattern are something new.

The first boss you will encounter in the game is a giant grim-ripper monster that is the usual kind of attack you see in every game. But once you start to fight you realize you haven’t seen something like this. You have to die several times just to find the right strategy and then die a couple more times to master your plane and defeat the boss. 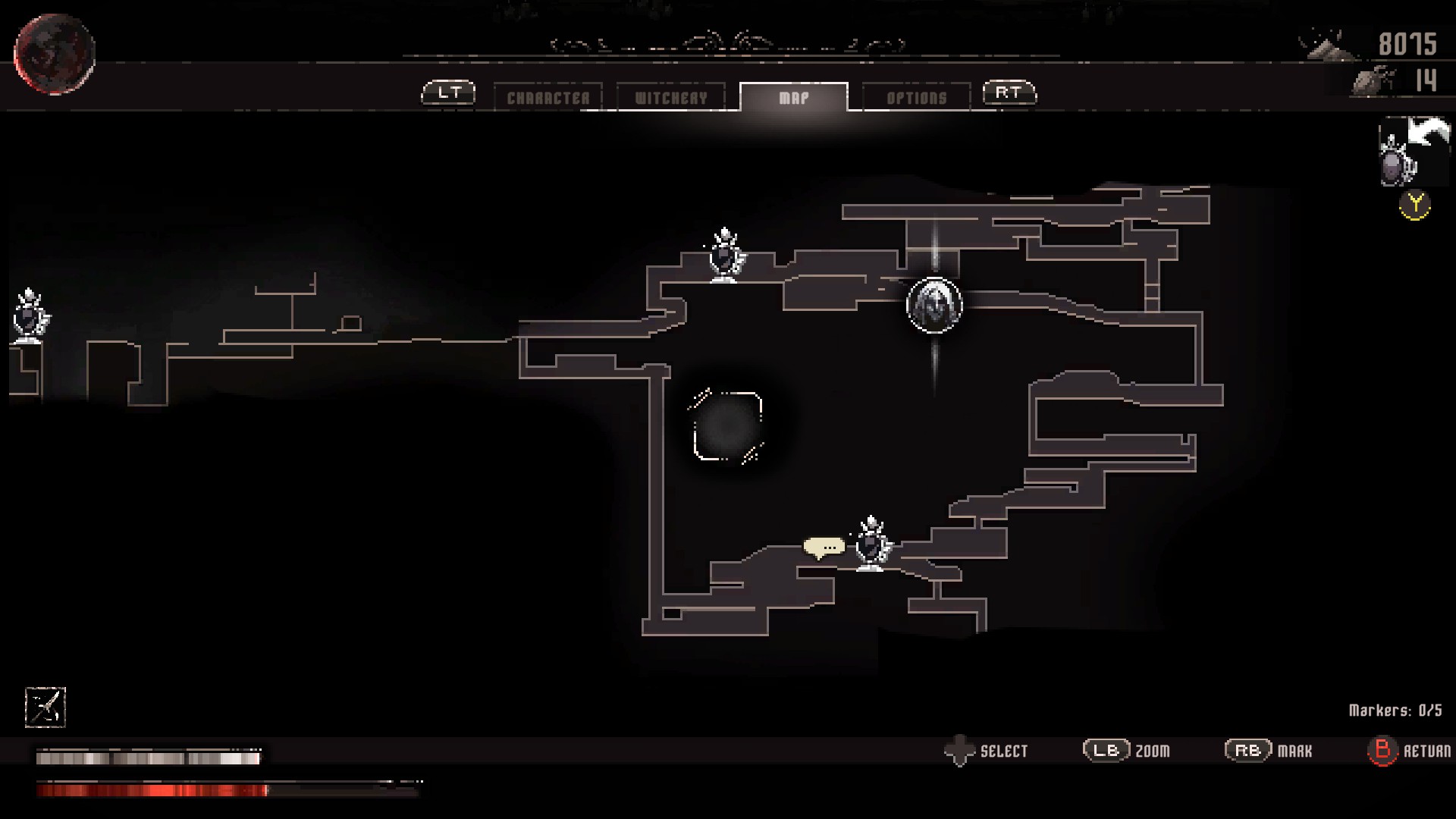 One of the executed good ideas is the Doppelganger enemy which is you. To unlock each checkpoint you must restore or fix a mirror. Some of these mirrors come at the cost of losing a skill you picked up on your run. But you can get it back if you could defeat your Doppelganger which has the same moves as you, but you will struggle to defeat it.

The last thing I shall point out is that sound editing and soundtracks are used in the game. Every track helps to make the dark and twisted world of the game more immersive but since more fundamental aspects of the game like the lore of Moonscars are not that rich, it can only do so much. There aren’t any tracks that will make you stop playing just to listen to it, but you won’t feel the lack of it either. 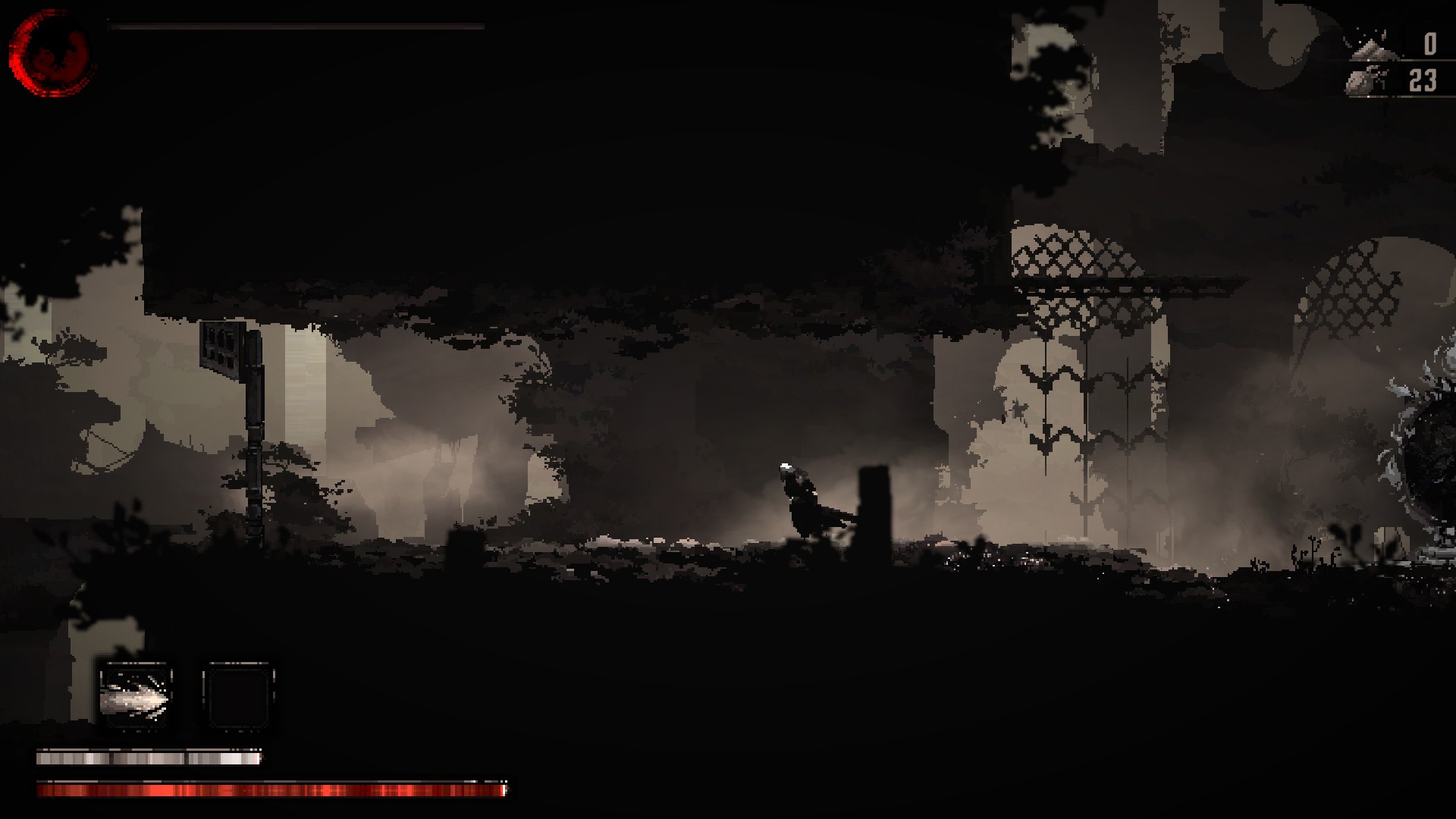 Moonscars is a good debut by Black Mermaid with some unique ideas and missed potential. The gameplay is fun and engaging but some mechanics feel a little unbalanced and in some cases can even forget about them and still finish the game. The story is well written, especially the dialogues but the lore and character building lacks enough depth to feel close to them. Overall the story and art style of the game is forgettable and this made the sound editing and music of the game lose their power and therefore feel shallow.