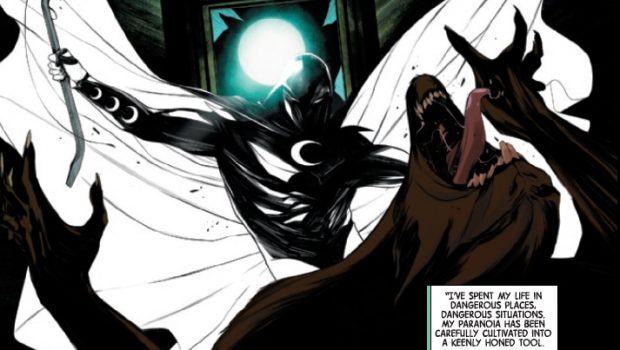 Summary: A new series for those to get into that doesn't need any prior knowledge if you are looking for something new or have heard of this character before.

Marc Spector, also known as the Moon Knight is the protector of all who travel at night and was bought back to life by an Egyptian God. When he spares the lives of some unwilling vampires (one who bitterly complained they used to be a vegan) who draws the ire of another follower of the religion and a showdown looms.

I had heard talk of this series but did not know anything going into it so I wanted to see how it would work out. It does seem a lot more serious minded than other series and does have a lot of room to grow the characters. The main plot device is the title character having a discussion with their psychiatrist about why they do what they do.

There is some great artwork here and it does seen at least different to other stories. Not sure if it will cross over into any other characters in the Marvel universe at this early stage.

I would recommend this one if you want to get into a new series without having to know a lot of the backstory as this is the first one.