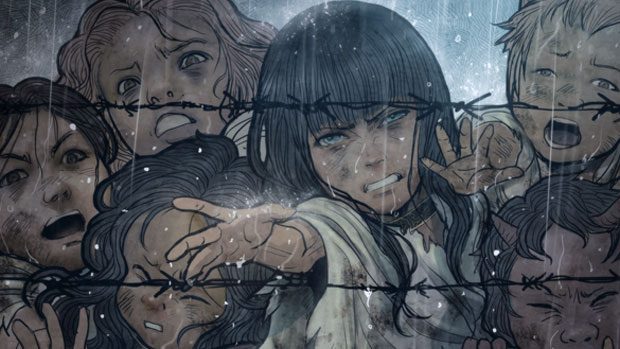 In the previous issue of Monstress we were finally introduced to the Ancients and the Queen of Wolves and her fading court. We also saw the introduction of the ruthless Warlord of the Arcanic Dawn Court who is relentlessly seeking the Monstrum, the monster that resides within Maika. Maika, Kippa and Ren are on the run, as now the Federation of Man, Cumaean and Arcanics forces are hunting them. We also heard for the first time about the mysterious Dusk Court which have been silent, with their members having not been seen for many years…that is until now. There is no rest for the wicked. 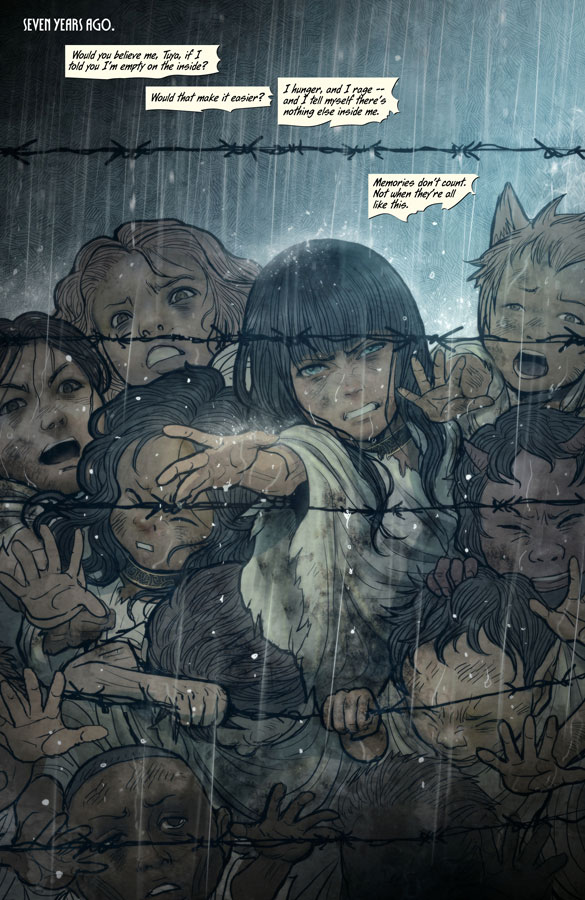 Issue #5 begins with a flashback to seven years ago, where Maika and Tuya are slaves under the watchful and cruel eye of Mistress Ilsa. This small scene reminds us about the special bond that Maika and Tuya have and how much they relied on each other in the past to get them through some of the darkest moments of their lives. Not only do we see the girls interacting with each other but we also see Maika’s internal dialogue, sounding rather like an echo to the scenes that we are witnessing. This dialogue reveals how scared and vulnerable Maika really is. She is lost, empty and full of internal rage. These memories to her are nothing, just empty thoughts as they are filled only with sadness and grief, heightened by her longing for Tuya. 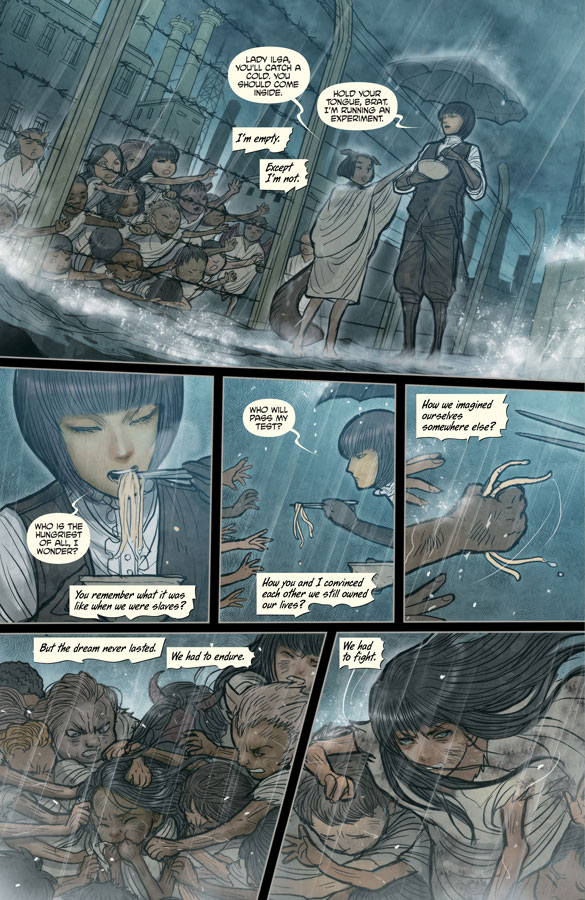 We are then introduced to the powerful winged warrior called Sir Corvin Doro. We quickly find out that he has been sent by the Dusk Court to escort Maika and her party to safety in the North. Maika reluctantly agrees to go with him after he convinces her that their prophets have foreseen her coming. This scene is loaded with a lot of tension, as we feel like we are about to witness another intense fight between Sir Corvin and Maika’s Monstrum.

The dialogue between Maika and the Monstrum is always interesting to read. In the previous issues it has become clear that Maika despises the Monstrum and has no trust in anything that it says. However, something shifts within Maika during this issue, as she listens to the Monstrum’s advice for the first time since their joining. It is clear that we are slowly starting to see an interesting and complex relationship develop between these two unwilling companions. I find that I’m really enjoying the Monstrum’s eerie voice whenever it appears. I can almost imagine what the creature sounds like as it speaks to Maika. Marjorie Liu has created a rather complex and interesting narrative between these two and I look forward to seeing where it goes. 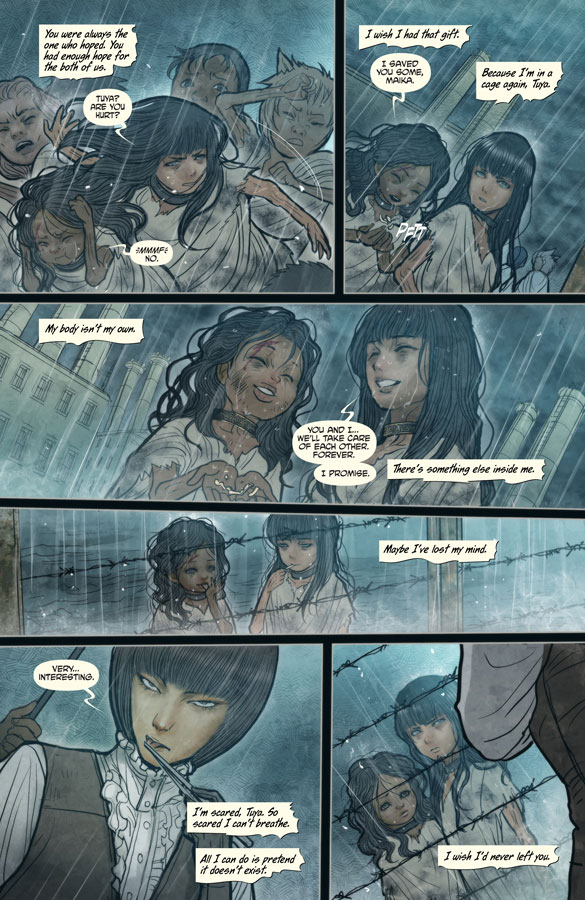 We also see the arrival of a slave that we haven’t seen since the first issue of Monstress, the formidable looking Resak, one of the few male characters in the story. We quickly find out that he is Lady Atena’s brother and that they are both working together to try and smuggle Arcanics safely out of the city. This was something I wasn’t expecting from these two! Atena also states that she fears Maika, as a dangerous monster resides within her. Resak reminds her that it is a monster made by the Cumaea and that Maika’s hate isn’t without reason. Resak also learns about the fragment of the mask that Maika has in her possession. His tone changes abruptly, as he ponders what this might mean. The mystery of the mask continues!

I absolutely adore Sana Takeda’s art, as it combines both beauty and darkness in such lovely detail. The strikingly beautiful faces of the women contrasted against the grotesque scenes of death and mutilation really highlight the diversity in Takeda’s art. Takeda also does a great job at creating a sense of history and culture between the different races. Their art, clothing and jewellery all appear uniquely beautiful and your eye is drawn to the detail of these objects. I found the cover art for this issue to be very interesting, as it appeared to tell a story. It shows Maika and Tuya back to back, looking both powerful and vulnerable at the same time. I noticed straight away that Maika possesses a metal arm, almost like a cyborg appendage. This is something we haven’t seen before and it had me questioning if this is something from the past or the future that we are seeing?

I also need to mention my love of Professor Tam Tam’s history lessons that are at the end of every issue. During these lessons we get to learn about the lore and history of this world. In this issue we learn about the five races of the world, which is all very interesting and important for understanding the politics better. This is a very effective tool employed by Liu to help expand our understanding of events that have occurred in the past.

In summary, issue #5 delivers an interesting and complex story. The narrative is being driven in an exciting direction and I look forward to seeing where it will be taking us in the future.