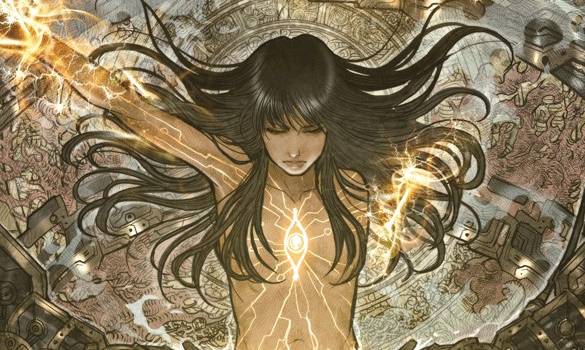 Summary: Maika's careless actions could endanger the city of Pontus!

With the political situation deteriorating and the threat of an attack on Pontus imminent, Maika must activate the shield barrier, however, her careless actions and need of haste could endanger the entire city.

The issue begins in the city of Orleen 2 weeks ago, where we see the Mother Superior recovering from her encounter with Maika and Zinn. Fearing the threat of them both, the Mother Superior wishes to leave immediately, so as to hunt Maika down, however, the Commander Inquisitrixe insists that she will be the one to hunt her down.

Back in Pontus, we see Maika and company making their way by boat to the temple that houses the shield room. When they arrive at the temple, young Kippa encounters another fox, who shows her a fox refugee camp, which brings new hope that she might be able to find her lost aunt. Meanwhile, Maika and the others enter the temple, where memories of the Shaman-Empress come flooding back to Zinn. Once inside the shield room, Maika is introduced to Counselor Fong and the Shield Master, who both seem fearful of Maika’s recent transformation and the presence of Zinn. Desperate times call for desperate measures, and with the threat of war imminently approaching, they are forced to use Maika, as they need a descendant of the Sharman-Empress to activate the shield. Wishing to make haste and rush the process, Maika climbs into the armour that will activate the shield without a thought that her carelessness could unleash something catastrophic upon the city. 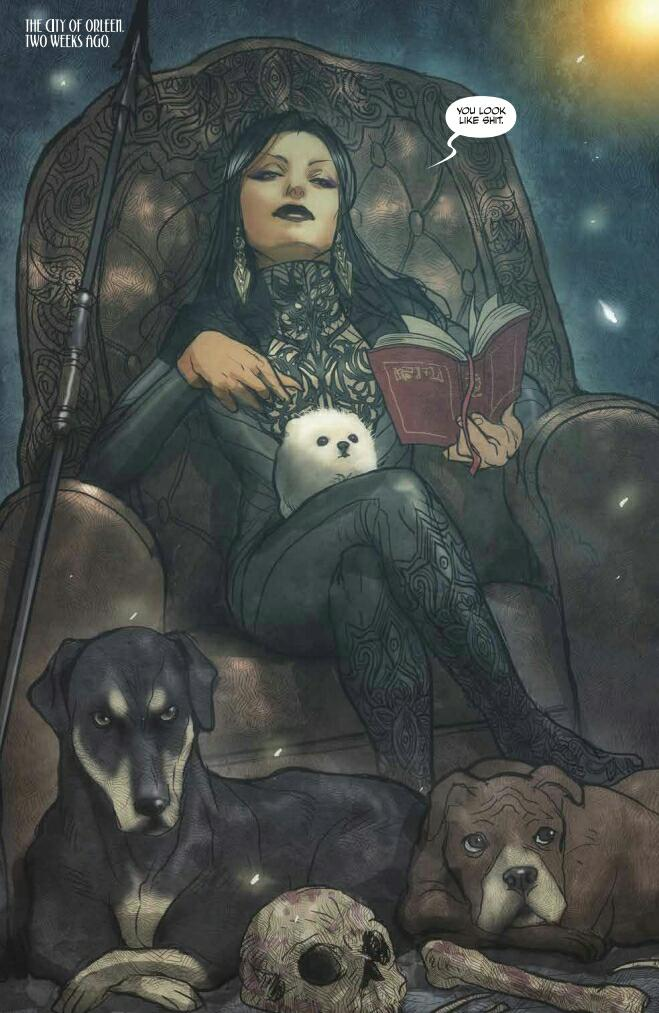 This is a slower-paced issue, focusing on the city of Pontus and the activation of the shield barrier. Activating the shield is a highly dangerous and risky process and she is warned as such, but Maika continues to ignore the warnings from the Shield Master. This whole scenario reminds us how stubborn and bullheaded Maika can be at times. I really do like Maika, but I can find her to be incredibly frustrating in certain situations, and this is one example of those cases. She very rarely heeds anyone’s advice, especially the monstrum’s, even though it often appears to offer wise words of wisdom. I guess this is because Maika still doesn’t fully trust Zinn, as there is a lot of ambiguity surrounding it’s true desires and motivations. I’ve always said that I’m the most intrigued by Zinn, and I still am as I find that there is still a lot of mystery surrounding this creature. I’m curious to discover more about it and what its true desires really are.

Elsewhere, political intrigue and scheming dominates the story, as we see both the Mother-Superior and the Federation navy taking drastic actions. They share a common goal, as they both wish to capture Maika and Zinn at any cost. Things are certainly heating up, with the rumblings of war on the horizon. It’s only a matter of time before things reach boiling point and begin to spill over. 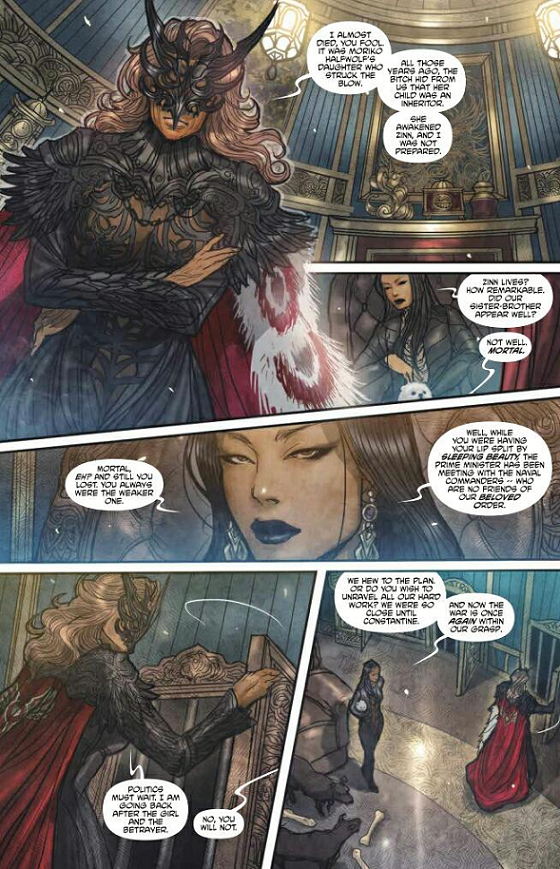 Sana Takeda’s art is once again beautifully detailed and captivating. The Mother-Superior is a particular favourite of mine, and seeing her deformed face strained from hunger and exhaustion is perfect. I also love the gorgeously detailed city of Pontus, with its layers of ancient buildings and temples. I found the shield room itself to be very interesting in its design, as I wasn’t expecting the device to be a suit of armour. The steampunk looking mechanisms are intricately drawn, really drawing attention to Takeda’s fine linework. The colouring is ghostly and atmospheric, making the city look like it’s shrouded in an ethereal blanket of mist. I also love the brighter colours that were used in the temple gardens, as I found them to be eye-catching and beautiful. We are so used to seeing cool and icy colours, so when there is a warmer and more vibrant palette used, it’s quite noticeable as it contrasts to the usual tones. 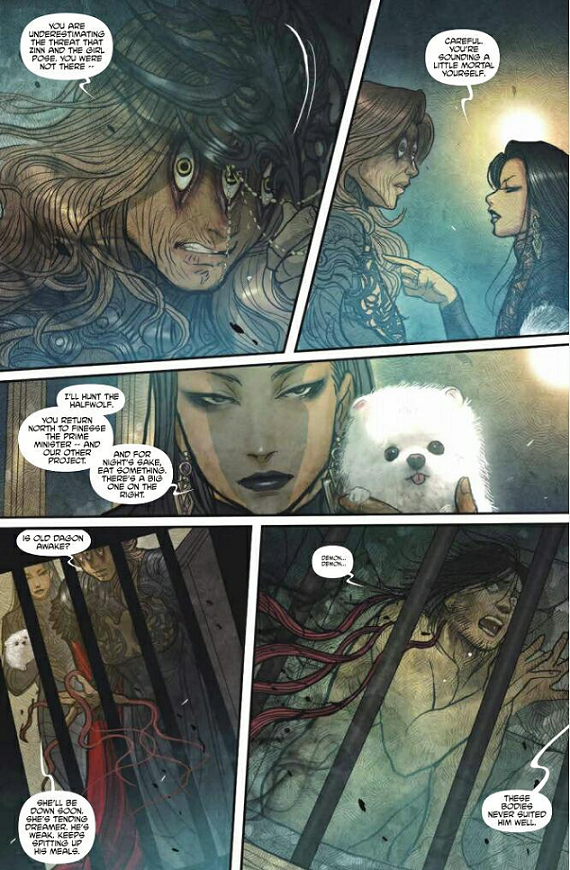 Overall, I found this issue to be a slower, gradually building with tension as we reach the point where the attack on Pontus will occur. Time is running out for Maika to activate the shield barrier in time before the Federation attacks. I’m curious to see what the next issue has in store for us, and what will transpire. 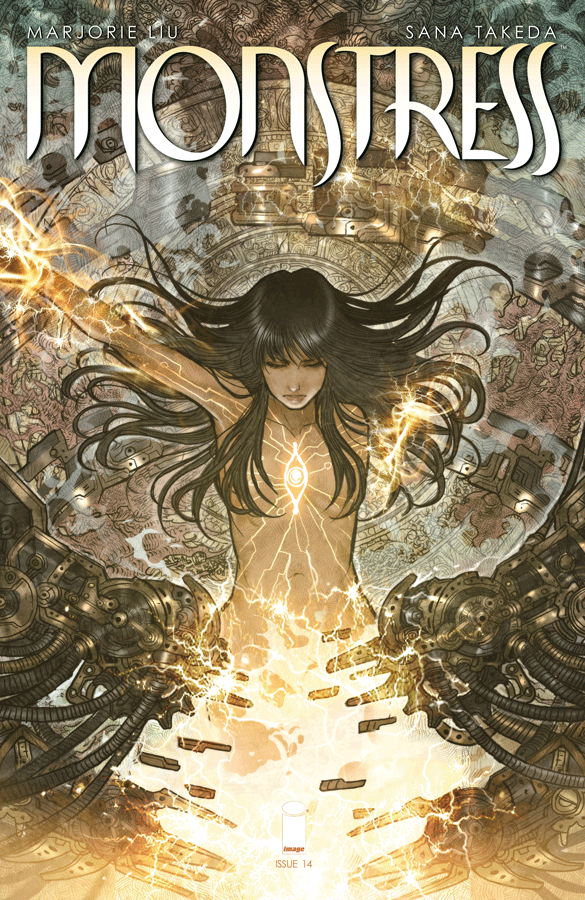