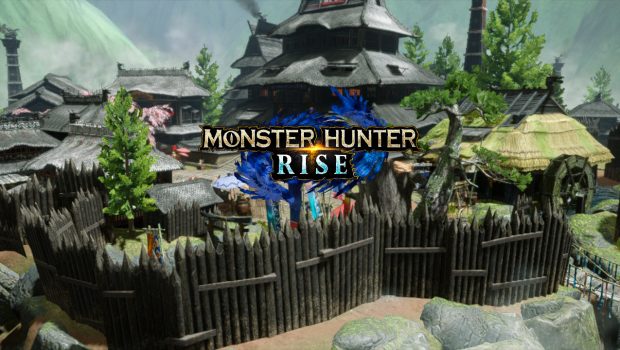 I had a feeling that Capcom was pretty confident about Monster Hunter Rise after they offered not one, but two demo periods with a generous amount of content to play through. On the one hand, I’m sure the demo time was crucial in working out some server kinks and weapon balancing tweaks – but I reckon they were so stoked with the product they had on their hands that they just wanted to flex a little. I would too if I were them, because Monster Hunter Rise is an exceptional game that is bursting with new features and runs like a dream on the Switch. 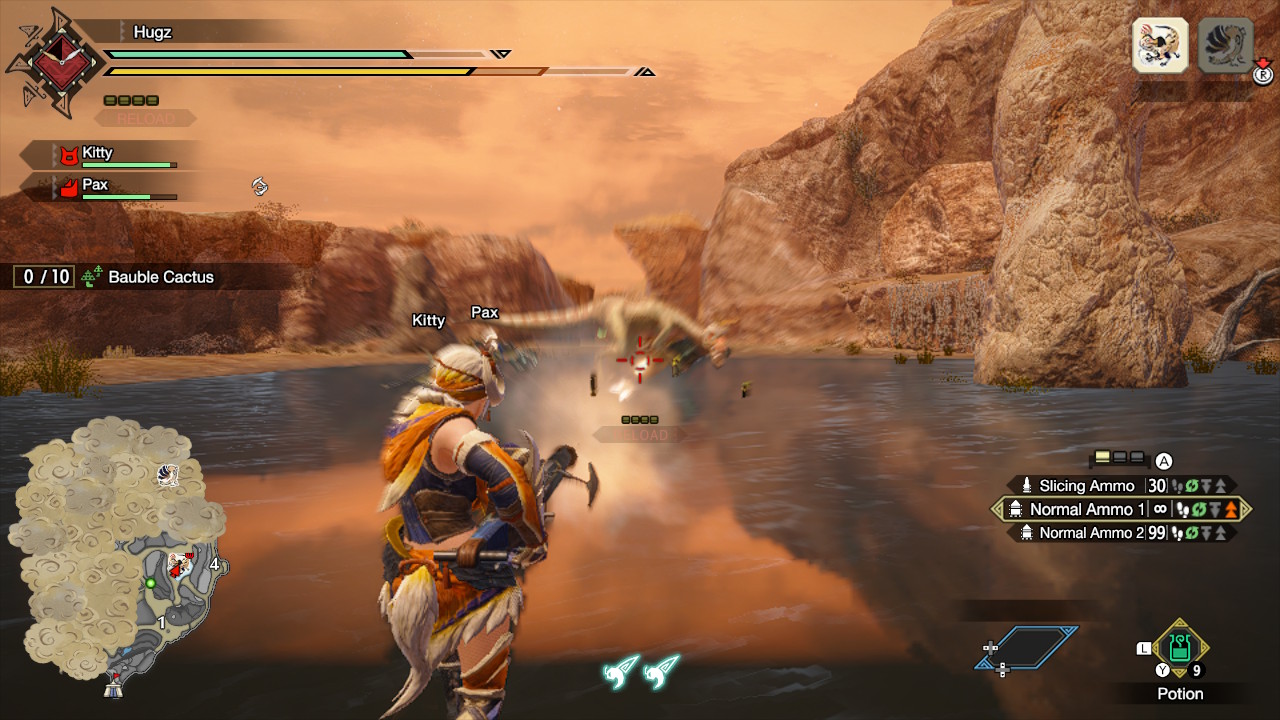 For those that aren’t familiar with the legacy of the Monster Hunter franchise, here’s a quick briefing. The series began in 2004 with Monster Hunter for the Playstation 2 and fundamentally, the game’s core philosophy hasn’t changed much over the course of a half-dozen main-stay titles. As the title suggests you take the role of a hunter, specialising in defeating or capturing large monsters. Your reasons for doing so have varied mildly from game to game, but the main motivation for stalking and slaying these ferocious beasts is to harvest their various body parts in order to craft more powerful weapons and stronger armour. 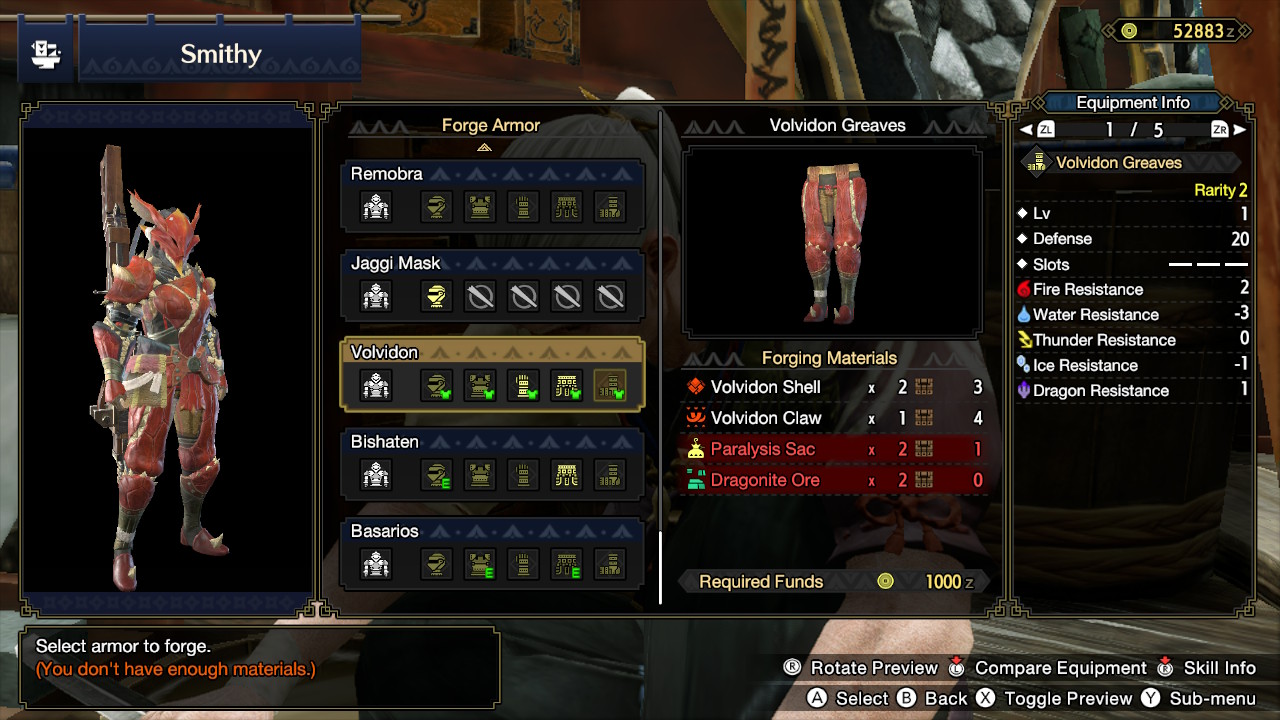 As was to be expected, Monster Hunter Rise doesn’t divert from this philosophy of ‘hunt to craft, craft to hunt’. The game takes place in Kamura Village, a gorgeous, cherry blossom-lined, coastal town set in feudal Japan where you take on the role of a freshly initiated hunter. Shortly after proving your worth to the village elder, news reaches the town that a ‘Rampage’ is heading towards Kamura Village. The ‘Rampage’ is an event that occurs only once in a lifetime, where hordes of gigantic monsters tear through the countryside, devastating everything in its path. The ‘Rampage’ is controlled by the Magnamalo, a gigantic four-legged beast of pure darkness, and it’s up to you to slay this beast in order to save Kamura Village. 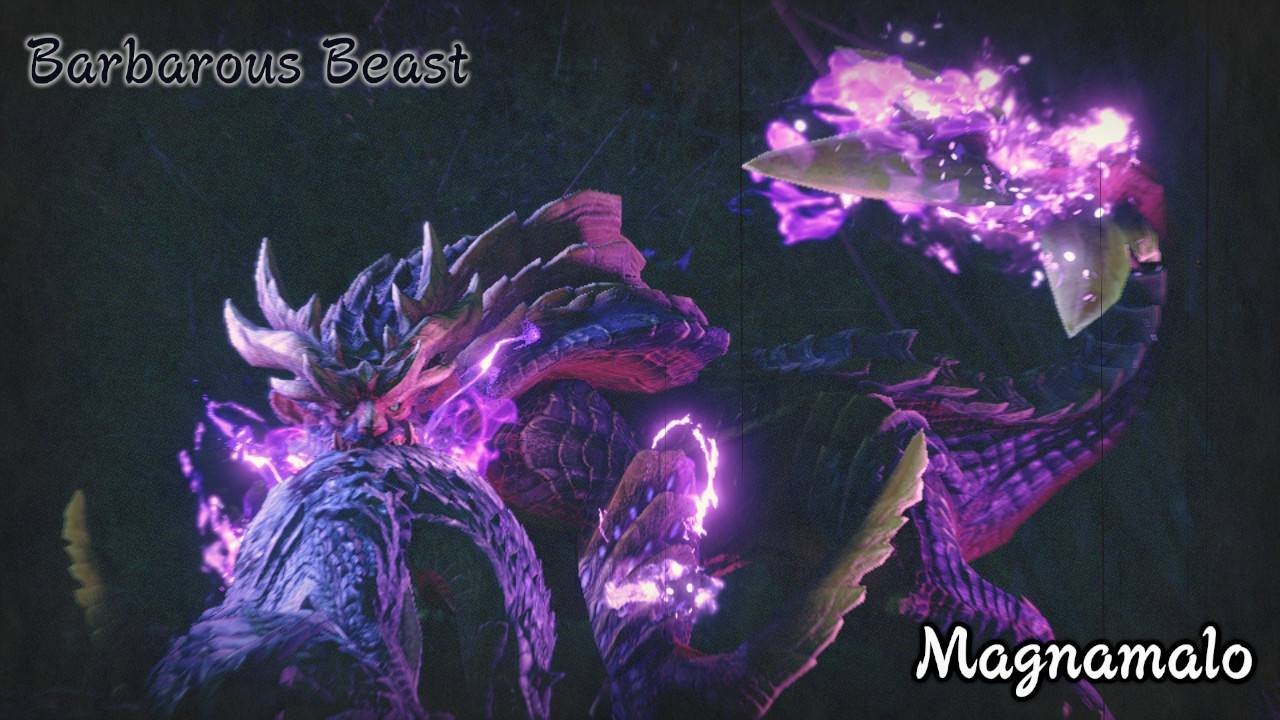 Unfortuantely, this is pretty much the extent of the narrative in Monster Hunter Rise. You’ll occasionally get a few dialogue exchanges that illuminate some character relationships between various vendors and inhabitants of Kamura Village, but there’s really very little else in terms of storytelling. This is unfortunate because the previous main entry in the Monster Hunter franchise, Monster Hunter World, was dripping in narrative and even had a story-based DLC expansion. It’s also doubly disappointing because Kamura Village and its inhabitants are filled with life and charming personalities. There are a few basic fetch quests where a character may ask for some honey to make a meal for example, but some more interpersonal narrative stringing these quests together would have gone a long way. 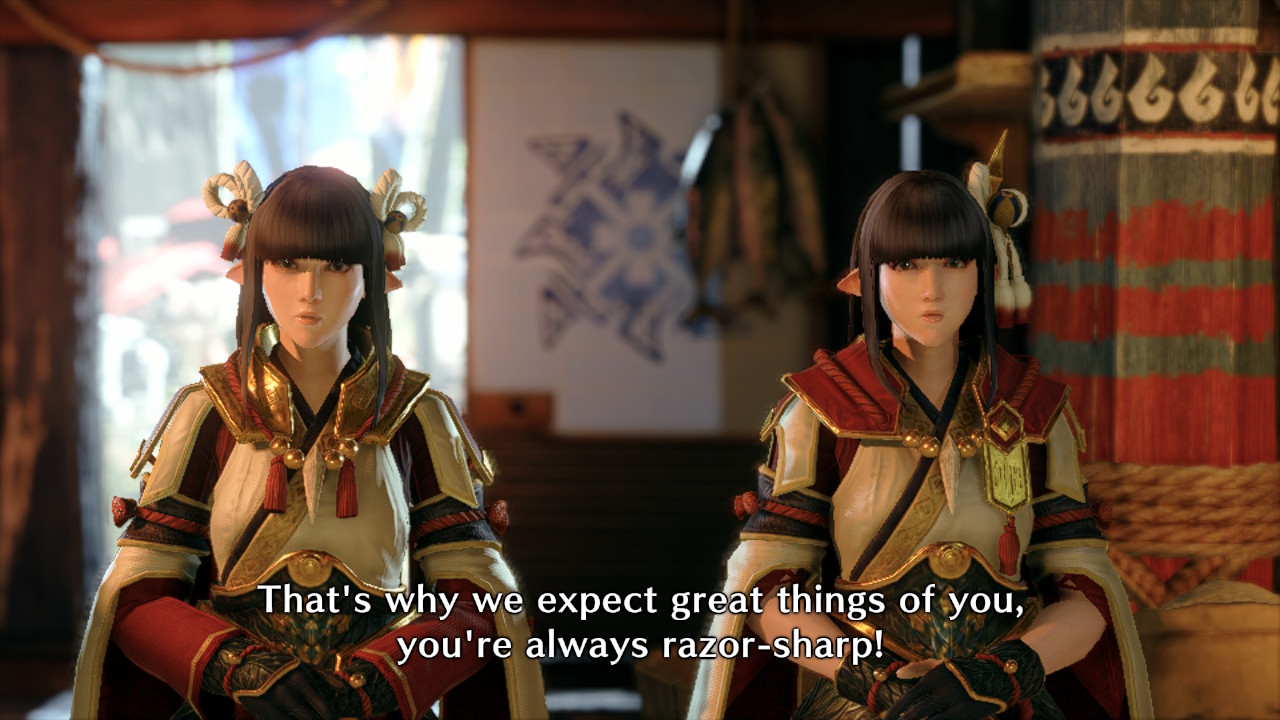 The ‘Rampage’ also works as a framing device for a new game mode introduced to the Monster Hunter series called ‘Rampage Quests’. ‘Rampage Quests’ combine general tower-defence mechanics with standard Monster Hunter beast slaying. ‘Rampage Quests’ take place in a pre-constructed fortress where you’ll set up defences in order to stop waves of monsters from destroying the gate leading to Kamura Village. Automated turrets, bombs and even warriors from the village can be strategically placed within the fortress in order to take down the onslaught of monsters. ‘Rampage Quests’ are a nice diversion from the standard Monster Hunter gameplay and could be quite fun when coordinating with a group of friends. However, these quests can often be quite stressful and overwhelming when playing solo as you race around the fortress repairing your defences, whilst also taking control of turrets to fend off attacking monsters. 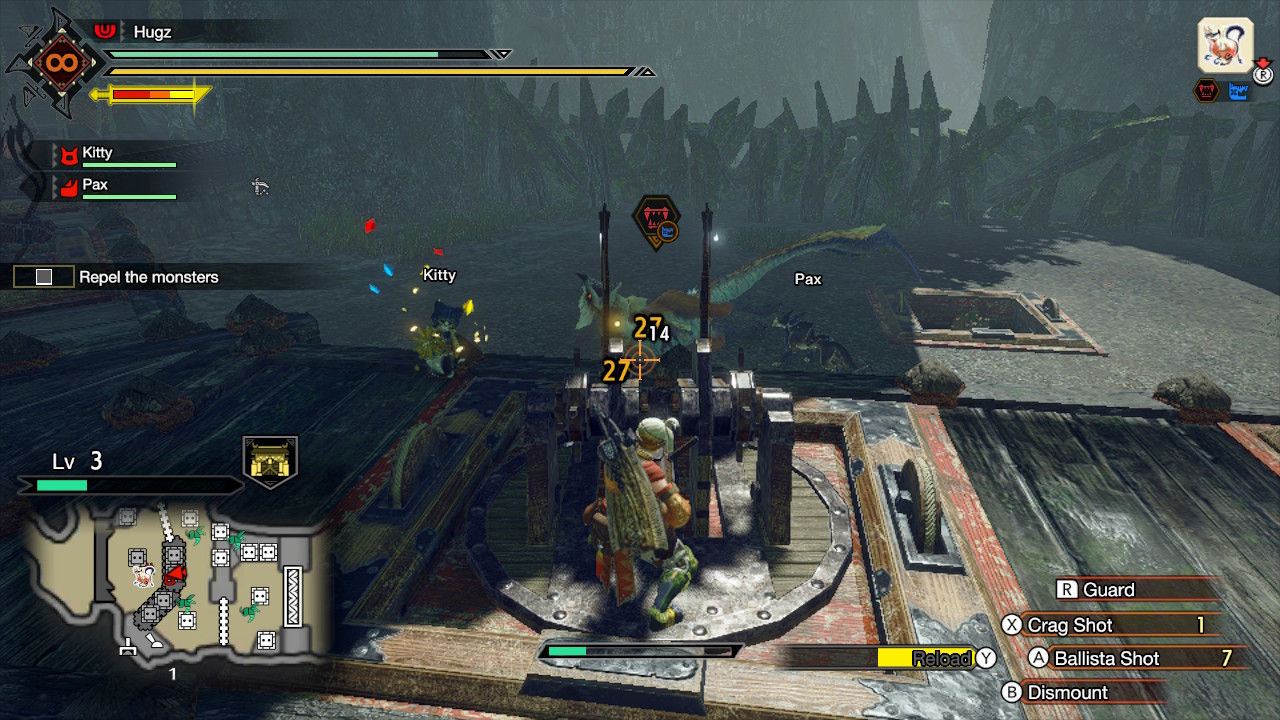 Another new addition in Monster Hunter Rise is the introduction of the Wirebug. Wirebugs have a variety of functions, but they basically work like grappling hooks on a short cooldown, which opens up huge possibilities to traversal, movement and combat. In its most basic form, the Wirebug can be activated by holding down the left trigger to bring up an aiming reticule, then tapping the right trigger to zip to wherever you’re aiming. If you grapple onto a wall, your character will use their stamina to run up or across it and multiple Wirebugs can be chained together to get even higher. Wirebugs can also be used to lasso and mount downed monsters, allowing you to control them for a period of time. 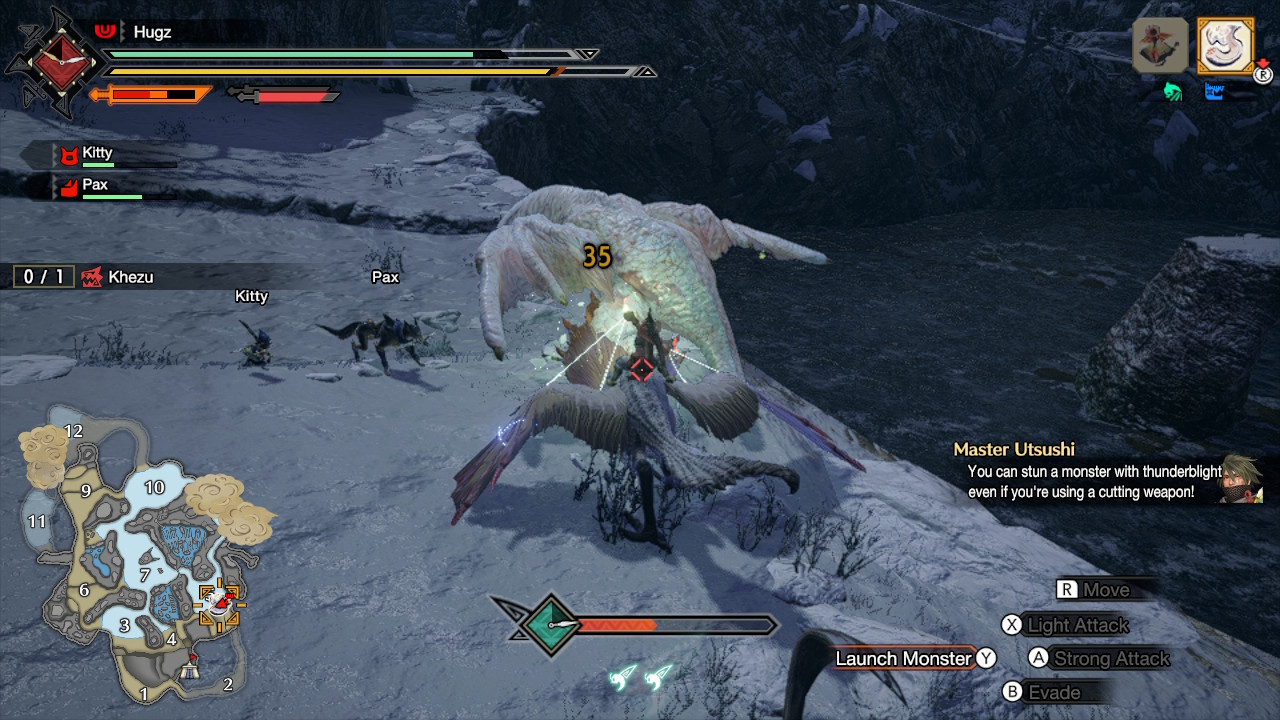 The introduction of the Wirebug has also had a major influence on the level design in Monster Hunter Rise. The huge open areas without loading screens introduced in Monster Hunter World have made a triumphant return and there are a variety of locations in different biomes to explore. However, the verticality offered by the Wirebug’s grappling hook has been incorporated into the level design, with many areas featuring sprawling subterranean caverns and sky-high ridge lines. While it may be unwise to fight monsters on anything apart from solid ground, exploring these narrow peaks and scaling mountains is crucial to gathering materials for supplies and chasing down endemic life, which are small collectible creatures that provide temporary stat boosts to assist in your upcoming monster battles. 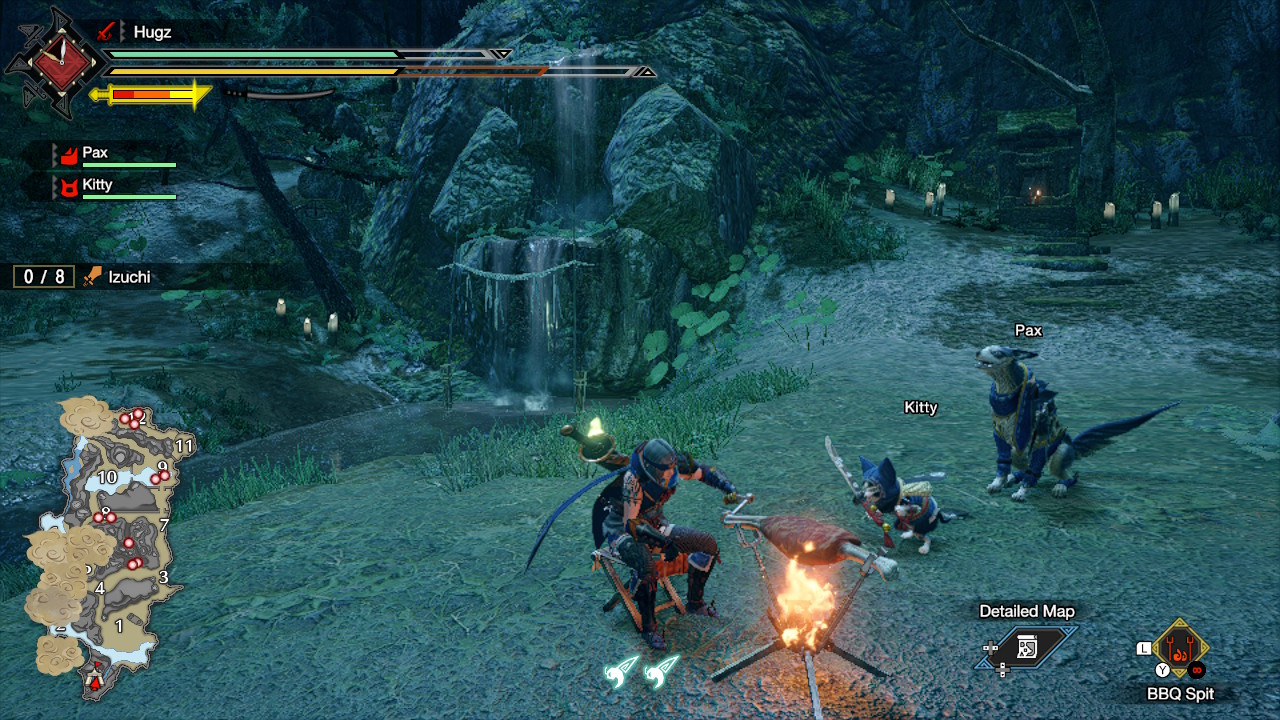 As much fun as the Wirebugs are, my favourite new feature introduced in Monster Hunter Rise is the Palamute. Similar to Palicos, Palamutes are adorable canine buddies that can be recruited to assist in combat, or simply to run chores while you’re out hunting monsters. When used in combat, Palamutes can be trained to take on a tank/support/DPS role depending on your play style and weapon choice. You can also Jump on the back of your Palamute at any time and speed through the level to flee an overwhelming foe or chase down a wounded beast. The Palamutes are an excellent addition to the series as their versatility adds a whole new dynamic to both combat and exploration. 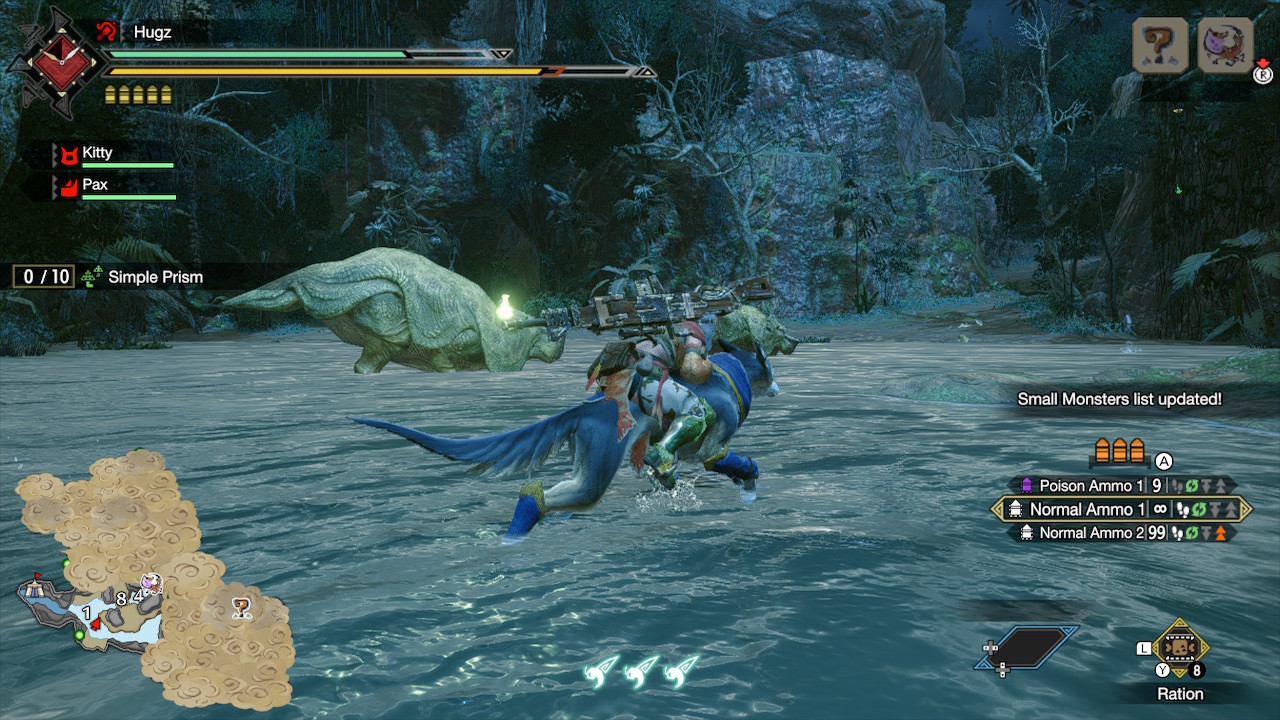 While its exciting to have all these cool new features in Monster Hunter Rise, the question at the forefront of everyone’s mind is how well does the game actually run on the Switch? Well I’m pleased to announce that Monster Hunter Rise both looks fantastic and runs incredibly well on the Switch in both portable and docked mode. It’s an absolute feat of technical wizardry that Capcom somehow managed to keep the game running at a solid 30FPS whilst also juggling the huge open areas and the massive monster battles without significantly sacrificing visual fidelity. Textures and model animations all look pretty darn good and I very rarely encountered any type of framerate drop, even when multiple monsters showed up to battle each other at the same time. Admittedly, the scale of the monsters doesn’t seem as gargantuan as they did in Monster Hunter World, but some of the bigger monsters still tower over your character and fill the screen if you get too close. 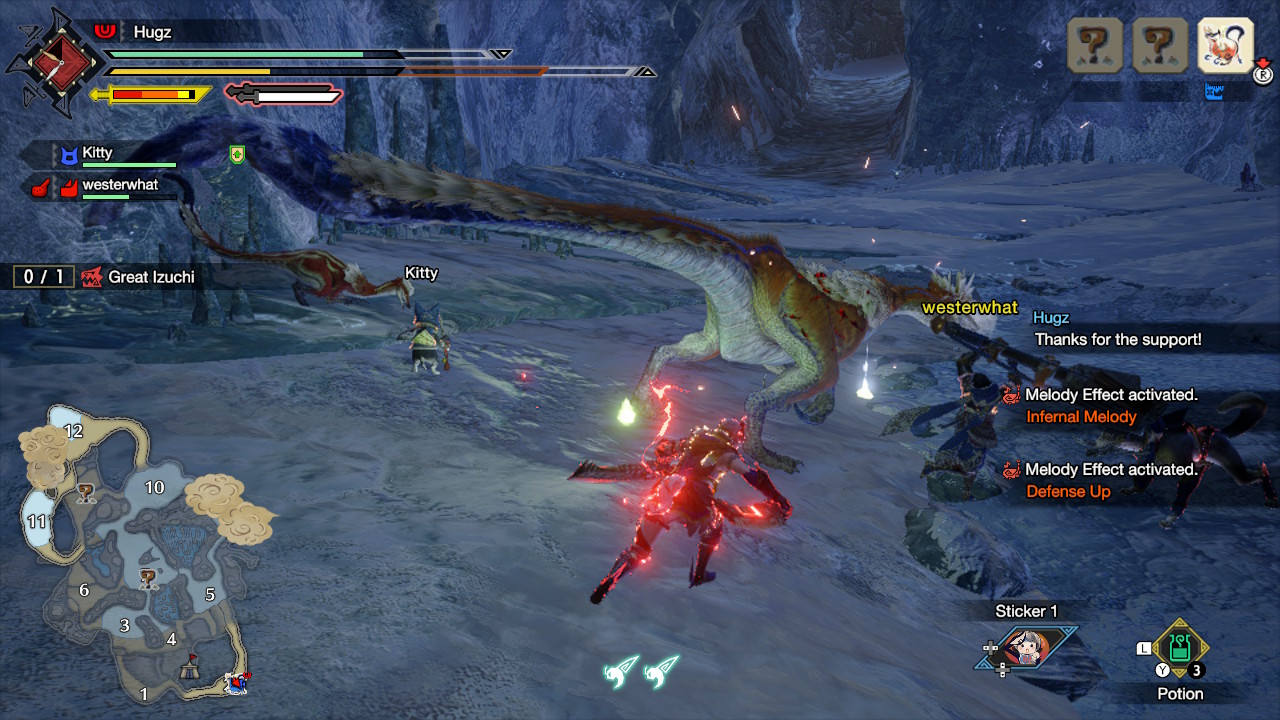 There’s so much more to Monster Hunter Rise that I could go on about for pages and pages, but I’ll try to briefly hit the sticking points before I run out of room. Generally speaking, I think this is the most accessible and user-friendly Monster Hunter game that I’ve played, but it still manages to retain much of the deeper complexity that hardcore fans have come to expect. There’s a fantastic variety in the weapon selection with plenty of complex mechanics to master, however it’s now easier to upgrade and craft new weapons, so switching to a different play style doesn’t require hours of grinding for resources. I also need to point out that the music is sublime and the Kamura Village theme song has been stuck in my head since I started playing. 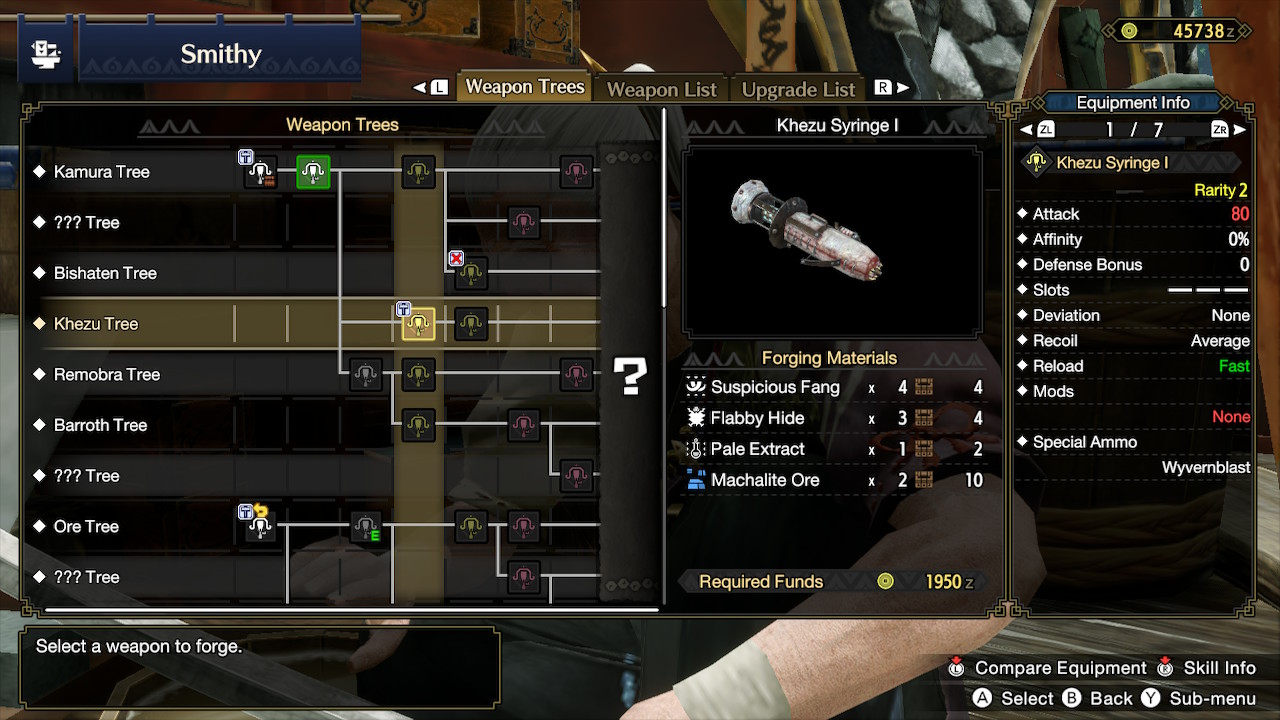 For my money, Monster Hunter Rise is the high-water mark of the series. The addition of the Palimutes and Wirebugs have reshaped both combat and exploration for the better – so much so, that going back to older games in the franchise will be almost impossible. While it may not have the narrative focus of Monster Hunter World, Rise expands upon this formula and refines the experience to be both accessible for newcomers, whilst also retaining that deeper level of complexity that drew in hardcore fans from the beginning. I’ve also just got to give props to Capcom for squeezing a fully-fledged Monster Hunter game down onto the Nintendo Switch with nary a compromise to visuals or featureset. I’ve got a feeling Monster Hunter Rise will be in the gaming cultural zeitgeist for a while to come, so I highly recommend you jump on board and come along for the ride. 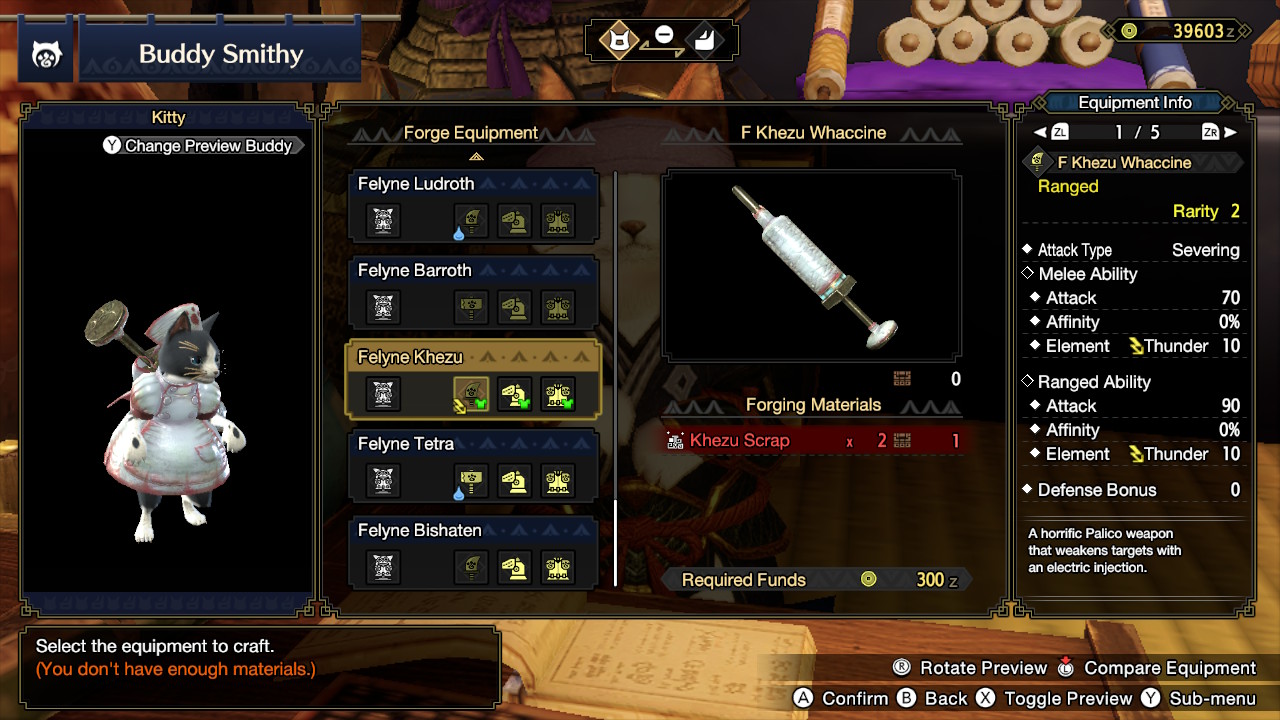 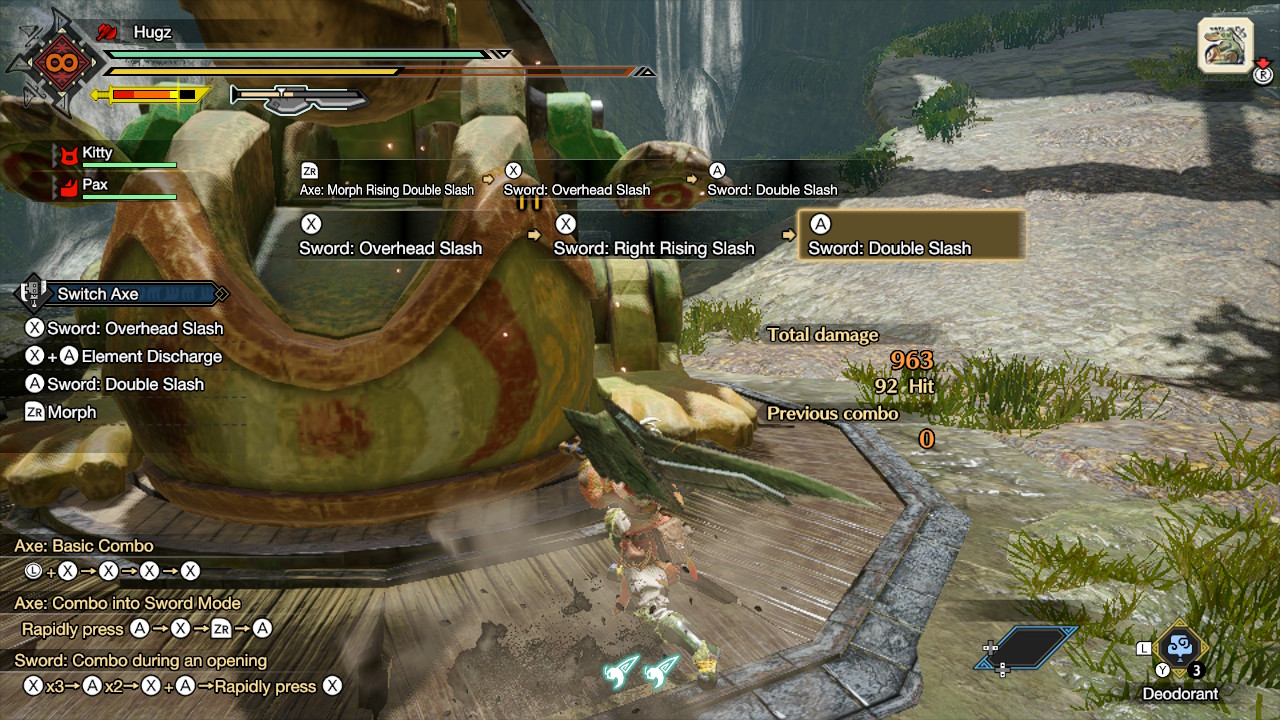 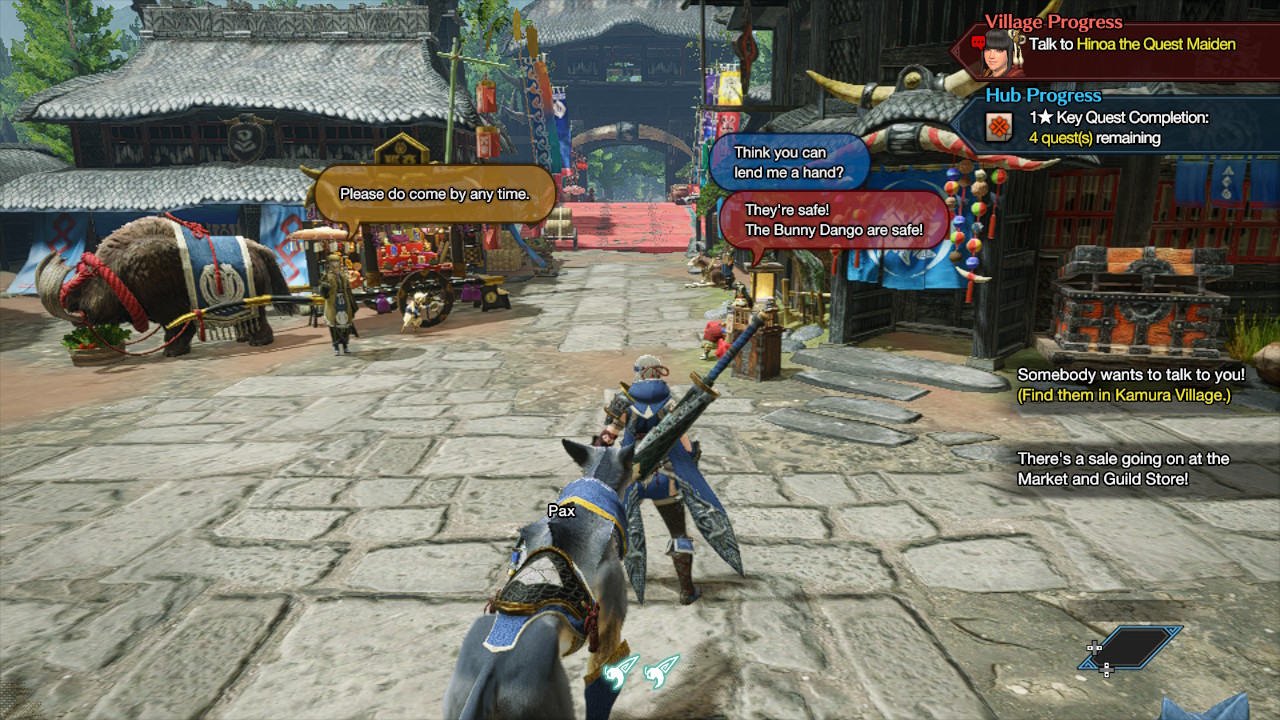