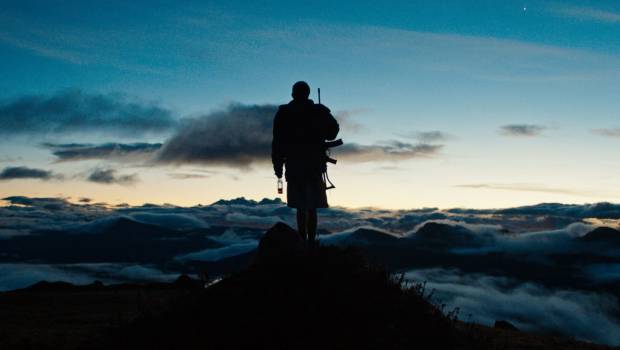 Incredible scenic photography and visceral imagery make the coming of age drama Monos essential viewing. The film is about a group of teenagers located on a mountain range in Latin America. Each member possesses a codename, such as Rambo (Sofia Buenaventura), Wolf (Julian Giraldo), Bigfoot (Moises Arias), Lady (Karen Quintero), and Smurf (Deiby Rueda). They are overseen by The Messenger (Wilson Salazar), an adult who is their gateway to a mysterious company called The Organisation. He trains them to become child soldiers and hands them assault weapons. Their mission is to extract Sara (Jennifer Nicholson), a doctor and a prisoner of war, back to their base. Wolf is also in charge of caring for a cow named ‘Shakira’ on behalf of The Organisation. However, when ‘Shakira’ is killed, the group fails to address their mistake and begins to unravel.

Monos’ incredible shooting style defies explanation. It is courtesy of Colombian filmmaker Alejandro Landes and marks his third film after the documentary Cocalero (2007) and the feature Porfirio (2011). Landes said Monos was shot in Chingaza, a national park outside of Bogota. It is higher than thirteen thousand feet and possesses limited oxygen. The high-altitude accounts for the heavy clouds and the setting’s damp, muddy terrain. For the jungle scenes, Landes filmed in the Samaná Norte river, which until recently was inaccessible due to fighting between paramilitary groups. Thirty young actors were chosen to undertake military training, including weapon exercises, to prepare for these scenes. Eight were selected for the final group. Most are first-time performers, except Moises Arias who featured on the show Hannah Montana (2006). Interestingly, Wilson Salazar was a real child soldier. His uncle placed him in the Colombian Revolutionary Armed Forces. Using non-professionals adds to the story’s verisimilitude. If a film’s assemblage ever demanded a ‘making of’ feature it is Monos. 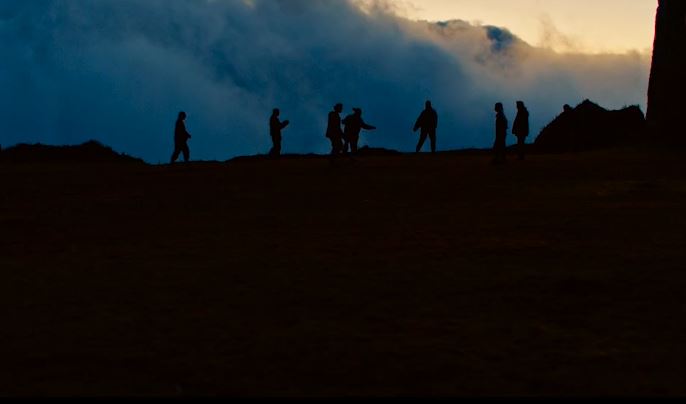 The film enhances its thematic ideas by combining its intensely realistic shooting style with meaningful artistic choices. The realism, including the natural lighting, could never have been achieved in a studio. Monos also transcends its naturalism by adding cinematic choices and surreal images. Landes describes this filmic style as, ‘a combination of the natural and mise-en-scène’. The film opens by photographing the thick clouds hovering alongside a mountain range. When we see the group, they are visualised as small figures buried in deep shadows. The long shot of the terrain emphasises their isolation from society and everyday life. As the camera moves in, they are seen blindfolded and playing a game of soccer with a can. The shadows and blindfolds dramatise Landes’ thesis. He is exploring how military culture dehumanises children and the way authoritarianism surpasses individualism and democracy.

These visual choices feature throughout Monos and underline the children’s transformation. In another early scene, the group stands shoulder to shoulder. They are framed from a wide angle to stress their conformity and militarism. As they are given their orders, the camera crabs sideways between each teen. The blocking, shot selection, and dialogue encompass Landes’ political viewpoint. He is observing how adults transform children into soldiers by controlling their behaviour and diluting their free-will. A similar observation is made when they perform strenuous exercises together. The close-ups of their faces emphasise their intensified, robotic mindset. As they form a circle, their wild grunting sounds are juxtaposed with the score by Mica Levi (Under the Skin; Jackie). She combines a synthetic soundtrack with light whistling to compare the group’s raw energy and uniformity to a wolf pack. 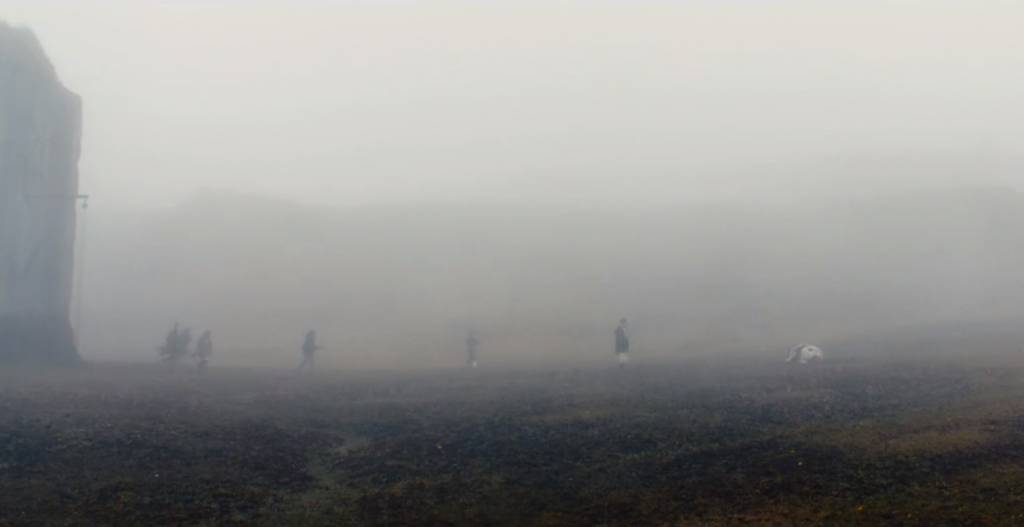 Without The Messenger, the group’s social conformity dissolves. The change is dramatised when a teen aimlessly fires and accidentally kills ‘Shakira’. The incident shows the effect of militarisation on the natural world and children growing without parents, an idea heightened by choosing actors nearing adulthood. Following the death of ‘Shakira’, the group’s conformity dissolves, and their dehumanisation intensifies. One child says, ‘we can’t lie. We’ll all be court martialled’. The line stresses their repression and fear of The Organisation. They attempt to counter their mistake by delivering Sara. She is taken to an underground camp that is bombed by the military and then to the jungle where she attempts to escape. Landes’ choice of spatiality, the wide-open mountain range and the dense canopy of the jungle, reflects an ideological shift from conformity and authoritarianism to madness. Bigfoot proclaims, ‘we are our own organisation now!’ as he tries breaking away. While the teens have previously trained together and briefly fallen in love, some submerge themselves in the jungle terrain to escape death.

The film’s imagery is increasingly surreal to reflect the changing natural world. There is an incredible shot where the group works together by dragging the body of ‘Shakira’ with ropes. Similarly, Landes says an image of a pig’s head is from William Golding’s novel Lord of the Flies (1954). There are surreal set pieces towards the end too where they pursue their enemies while camouflaged. Their careful hunting movements resemble the choreography of a dance as their blue figures peer through the jungle with weapons ready. In close-ups that mirror the opening, they are seen covered in mud and war paint and snarl like animals. Some have compared Monos to Francis Ford Coppola’s Apocalypse Now (1979). The war paint deliberately recalls Captain Willard’s face emerging from the water. The death of the natural world is thoroughly emphasised through these images and intertextual references. 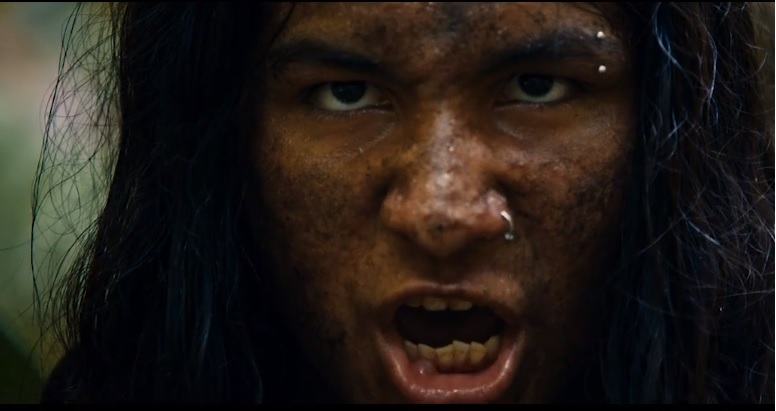 One approach that will divide audiences is the depth of the characters. It is slightly disappointing that Monos does not reveal character backstories. Nor does it possess a conventional protagonist or explore their personal goals, bar one girl who wants to dance on television. Landes argues correctly that the group is the main character. It transitions from working together in unison, lying about its actions, and then making fatal choices. There are surprises regarding who lives and dies, which adds spontaneity to the action. In one gripping sequence, Monos forgoes the group’s perspective to focus on Sara’s escape. It marks an interesting and organic shift in empathy. It is also terrifying too because she must swim down a fast-moving river and then camp during a downpour. Jennifer Nicholson insisted on performing her own stunts, which is scary and impressive. Her nerve and the water photography by Peter Zuccarini (Pirates of the Caribbean, 2003; Life of Pi, 2012), strengthens our involvement. 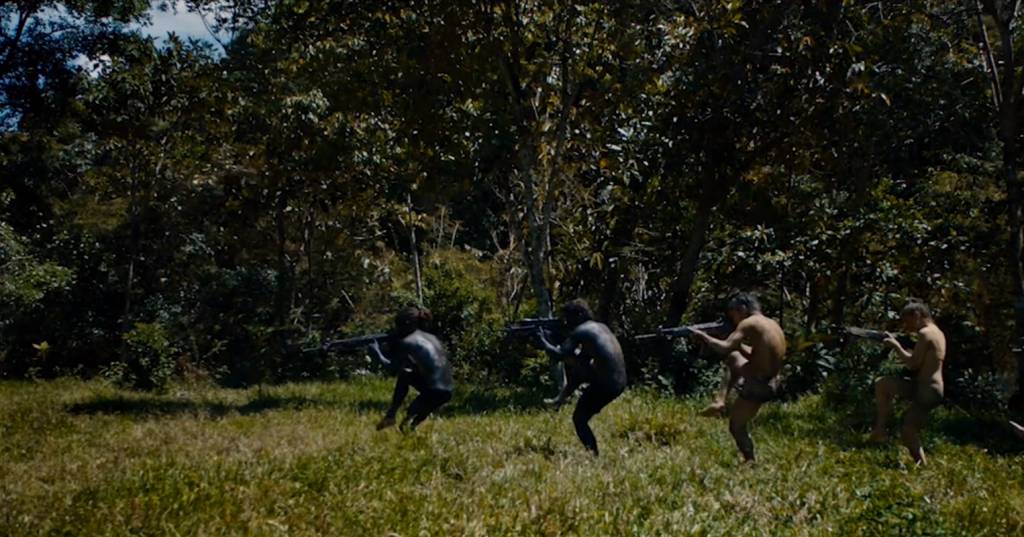 Monos is notable for showcasing attractive and meaningful artistic flair. While there are stunning naturalistic shots throughout, Landes refuses to linger on the scenic beauty. He creates a visual pattern that transitions from symmetrical blocking representing conformity and authoritarianism to visualising the jungle as a symbol of madness and chaos. The memorable but confronting imagery illustrates Landes’ belief that children’s individualism in Columbia is dissolved as they grow and become desensitised to violence. Monos is therefore a visually cinematic spectacle and a highly suspenseful story that dutifully combines style and realism. I saw the film at home on a screener, but the cinema would be the ideal format for anyone seeking an intense survival experience told with expert framing.