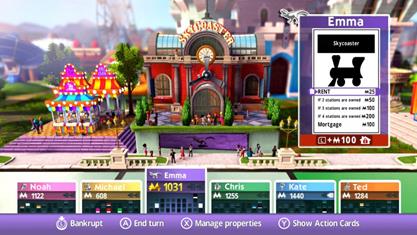 Ubisoft is bringing the iconic game to Nintendo’s new console for players of all ages to enjoy anytime, anywhere, at home on the TV screen or on-the-go in tabletop mode. Monopoly fans can feel the roll of the dice thanks to the HD Rumble, and play with up to five friends online or offline. Players can experience the game across three different 3D themed boards:  Classic City, Amusement Park and Haunted. As they progress, they can also unlock exclusive tokens and watch the city evolve in front of their eyes!

With MONOPOLY for Nintendo Switch, fans can play the way they want! With six official House Rules, a Speed Die mode and Special Goals to shorten the sessions, there is something for everyone. Action cards allow players to change the course of events. They can play them wisely to progress faster around the board, penalize opponents or get extra money.