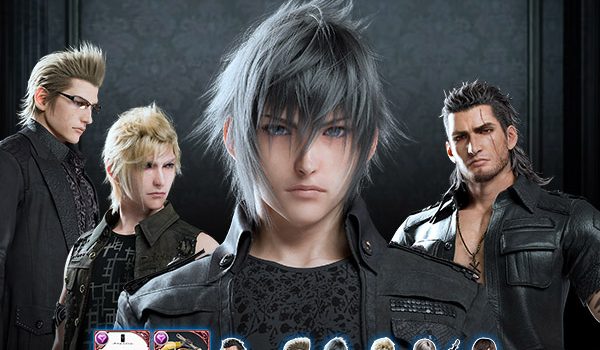 SYDNEY, 20TH March 2017 –  The popular mobile RPG, MOBIUS FINAL FANTASY®, expands its card line-up with the arrival of new limited edition FINAL FANTASY XV cards as part of a two-week collaboration event. New content updates have also been added throughout the month of March, providing players with an even richer gameplay experience across the land of Palamecia.

FINAL FANTASY XV Collaboration Event (17th March – 31st March) – For a limited time, Noctis, Lady Lunafreya, Prompto, and others from FINAL FANTASY XV will lend their special powers to the Warrior of Light as new ability cards. Additionally, the rare and powerful “Unbreakable Bonds: FINAL FANTASY XV” Supreme card also joins the line-up of special event cards. It grants players the powerful “Royal Arms” ability to take down even the strongest of foes.

For the duration of this collaboration, players will also be able to perform one ability card summon per day at no cost. Furthermore, up to six different FINAL FANTASY XV stamps and two exclusive ability cards, the Regalia and Cindy, are available as login bonuses.

March Content Updates: Two new jobs, additions to the legend job line-up, and new ability cards come to MOBIUS FINAL FANTASY this month. The Berserker and Rogue jobs offer the Warrior of Light a variety of new abilities and battle styles, giving players even more options when planning their attack strategy. These jobs, along with new ability cards, will give players the edge in the fight against Anima and Ultima—the latest additions to the Ring of Braves multiplayer arena. Furthermore, until March 23, players can gain an edge in multiplayer battles through the Revival Stamp Campaign, which grants recovery from incapacitation once per battle without the use of phoenix down.

MOBIUS FINAL FANTASY is available to from the Apple App Store and Google Play Store, and STEAM now. For more information, visit: http://www.eu.square-enix.com/mobiusff/.