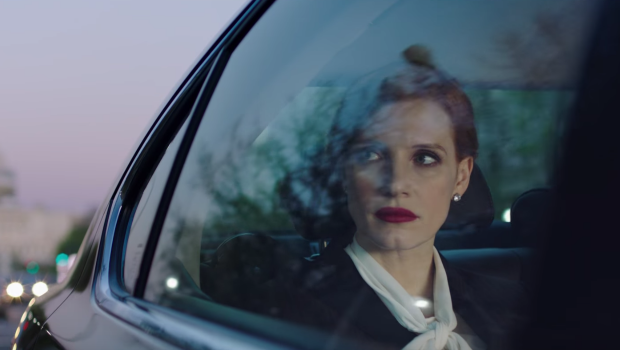 Only a layered performance from the amazingly talented Jessica Chastain could make the political thriller Miss Sloane as exciting as it is. Chastain takes on the role of Elizabeth Sloane, a ruthless Washington lobbyist who may or may not fight the good fight. Sure she’s turned down a lucrative offer to literally sell guns to women and instead leave her villainous firm to start her own, but it’s the measures she goes to that makes her moral compass a little wobbly. Laughing her way out from working under grumpy suits Pat Connors (Michael Stuhlbarg) and George Dupont (Sam Waterson), Sloane teams up with anti-gun dynamo Rodolfo Schmidt (an amazing Mark Strong performance) to tackle gun violence in America by passing a bill that would help reduce gun related deaths. Obviously in real life this has been a hot topic for a decade or two but don’t expect this movie to ride too hard on its high horse.

There probably is a political agenda with this movie but the focus is more on our title character and her methods and motives rather than an overall opinionated message. Though it definitely puts gun violence in America under the spotlight. So much so that even the set pieces guide the audience’s feelings about this polarising topic. The office that Sloane’s rivals work in is constantly dim and has spots of overhead lighting that most definitely vilify the lobbyists that support the notion that more guns should be sold to the public. While on the other hand Sloane has her team set up in an office space that has the same hip layout as the Google offices and enough lighting to power the Starship Enterprise. Maybe there is a political message here after all…

Even though this movie is very compelling with its twists and turns, the plot comes secondary to Jessica Chastain’s character. At first she’s presented as a righteous political fighter; “I work on causes I believe, that’s how I sleep at night!” she roars at her naysayers. But later we see her as something completely different. Sloane is revealed to be much more complicated as we see her lay awake at night suffering from insomnia (or maybe demons from her past?). And just like that the heroine gloss is wiped off the screen once we see the lengths Elizabeth goes to in order to triumph. In an attempt to win over the public opinion on gun violence, Sloane gets close to and outs the smart and sweet Esme (Gugu Mbatha-Raw), a survivor of a school shooting.

Not only can Sloane pull off such a cutthroat and sinister ploy but she also has enough spin to be able to get Esme back on her side. Like all political dramas there’s a fast pace that has to be kept up with in order to fully appreciate what’s going on story wise. There are a lot of shots of people in power suits walking down hallways, handing over folders while talking lots of political jargon, which adds up to a slightly tiring experience. Luckily, Jonathan Perera’s writing keeps the plot moving along with enough surprises to keep us interested. It should also be noted that this is Perera’s first gig as a writer so props to you good sir. 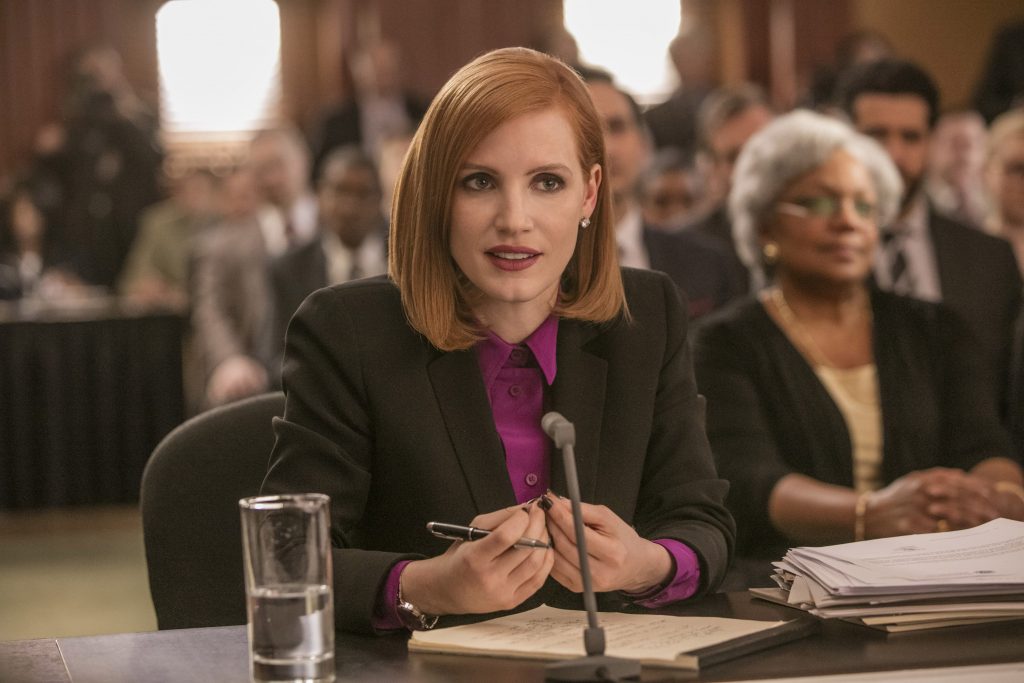 Even though this movie is a lot of fun to watch (in a strange dramatic way), the brush that’s used to paint the scene is changed dramatically when things turn a little James-Bondy when remote controlled spy cockroaches are brought into the picture. Yes the espionage is great to watch and is probably the boost this potentially boring political drama needs but it slightly clashes with what we see in the first half of the movie. Basically this 2 hour and 12 minute story could have been shaved down a little to tell a leaner version of the narrative while the fatty trimmings could have easily been left on the cutting room floor. At least the boardroom talk is left behind and a bit more excitement is introduced, even if both halves of the movie don’t exactly match up. That aside, it is again Chastain’s performance that helps us forgive the movie for its self-indulgent sins. Chastain plays Sloane as a ruthless character that chooses to play chess over checkers, constantly thinking five steps ahead; you’d definitely want her on your side and not the alternative.

Her complexity is probably best summed up when a character screams “Were you ever normal!” when questioning Sloane’s path to victory. As complex as the main character is it’s the plot that’s very easy to decipher. Once an overly attached male prostitute gets too involved in Elizabeth Sloane’s life it becomes very obvious that this will definitely come back to bite her in the butt later on. Speaking of foresights, the other characters in this movie follow a pretty predictable path as well. It’s almost as if all the original thoughts were placed solely on the main character during the script writing process. Then again she is literally the title character so maybe there was no room for anybody else’s growth during all of this. The greatest thing that this movie achieves is having a tough, female lead ruffle the feathers of the countless old white men that run politics. Even with a few flaws, Miss Sloane is exciting enough to warrant seeing it in the cinemas, especially if you’re trying to avoid the Oscar bait films that are flooding screens at the moment.

Summary: Only a layered performance from the amazingly talented Jessica Chastain could make the political thriller Miss Sloane as exciting as it is.