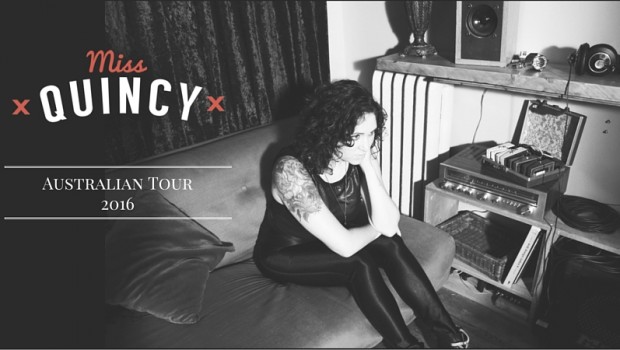 Canadian bluesy, boozy rock ‘n’ roll singer/guitar player Miss Quincy is returning for her second national Australian tour in Autumn 2016. Backed by her smokin’ hot Aussie rhythm section, the band intends to pick up where they left off last year – playing 18 festivals on 3 different continents and setting audiences on fire with their infectious upbeat songs and down & dirty grooves. Miss Quincy will be returning with a brand new single and live video to be released MARCH 4th, 2016.  “Remind Me of Myself” brings Quincy’s songwriting to a new level and showcases her powerhouse vocals that sit comfortably in the timeless space between vintage soul and cutting edge pop hooks. Quincy is releasing the single with a live in-studio video clip that lets the music do the talking. “Nothing translates this song, the feel and lyrics like the three of us playing it live.”

The single is being released on the heels of Miss Quincy’s recent full length album, Roadside Recovery, which received critical acclaim and charted on radio throughout Canada; also receiving airplay on Triple J, Triple R and ABC Radio in Australia. It’s hard to pin Quincy down to one locale, and her penchant for movement is a recurring theme in her music. Constantly seeking out the most exciting cities in the world, you may see the band live in Vancouver, Toronto, Los Angeles or Melbourne – and everywhere in between.  Regardless of where they are in the world, this is a band to experience.

“The song “Remind Me of Myself” was written by everyone I meet. I just wrote the words down and started singing them at the top of my lungs. I’m always amazed to learn over and over that the human experience transcends borders and boundaries. This song is about living and feeling and getting by.”

-Miss Quincy on “Remind Me of Myself”.