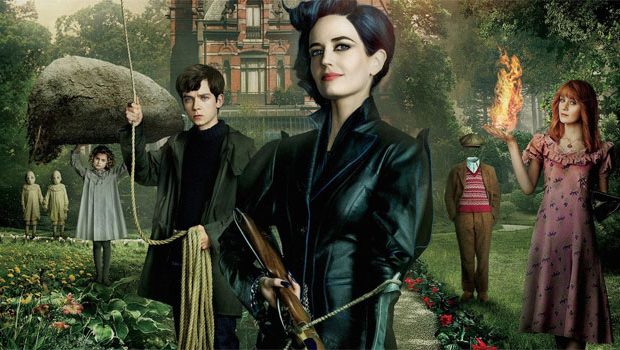 Miss Peregrine’s Home for Peculiar Children is based on the novel of the same name by author Ransom Riggs which revolves around 16-year old Jake who uncovers a mystery that leads him to a secret world for children with unusual powers who have been hiding from humanity. The plot of Miss Peregrine is unfortunately a collection of empty promises, themes, setups and relationships headed nowhere. This however is one half of an intriguing movie, starting with a boy named Jake (Hugo’s Asa Butterfield), who has trouble fitting into life in the American suburbs—a premise no doubt prescribed by director Tim Burton’s therapist. 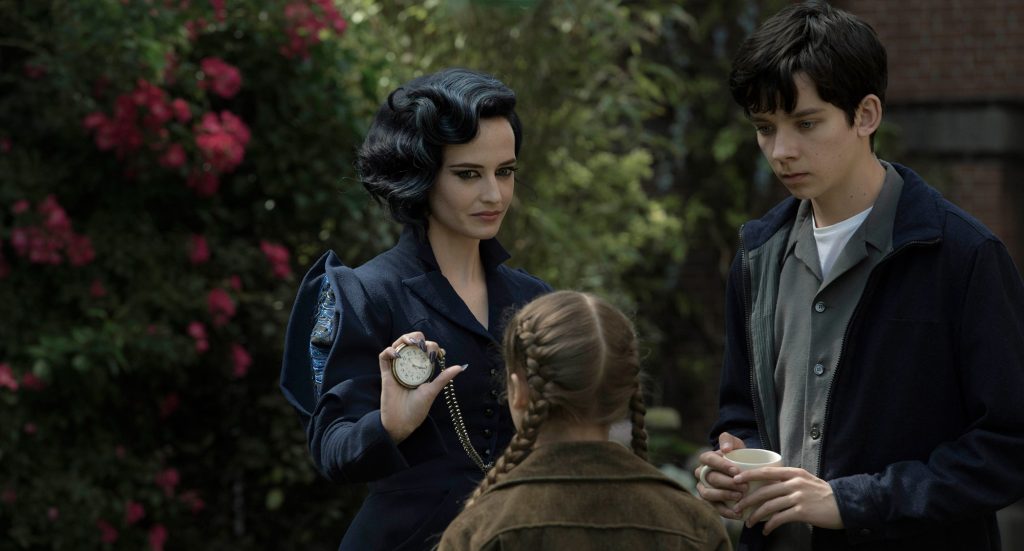 Jake’s father Franklin (Chris O’Dowd) is a disinterested and unlikable jerk, meaning the boy’s strongest rapport is shared with his grandfather Abraham (Terence Stamp), who tells him fables about how he used to visit a mansion occupied by people with special powers during the Second World War. This is predictable content, but there’s worse places to be than Big Fish territory. After he sees his grandfather die because of a monster, Jake’s psychologist (Allison Janney in another underwritten role) agrees he should travel to Scotland with his father, where Abraham’s story supposedly unfolded, as a means of expunging the fantasy. Once Jake finds the secret home of Miss Peregrine (Eva Green) and the peculiar children he becomes their house guest. 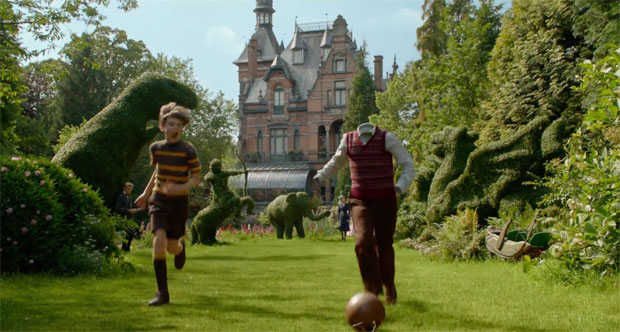 Amongst the children, its Emma Bloom (Ella Purnell) who is Jake’s closest ally. She can magically float into the air but wears special shoes to stay level with the ground. Another girl has a mouth at the back of her head and a boy displays his dreams through his eye as though it is a cinema projector. There’s also a strange set of twins, another boy who can turn invisible and doesn’t feel he needs clothes, and a bitter fellow who creates magic puppets and intensely resents Jake. Time is the collective obsession of this family; Miss Peregrine calculates all their actions with a watch and they repeat the same day their home is destroyed by a bomb spiralling from the sky. But what else are they also hiding with their awkward sideways glances? 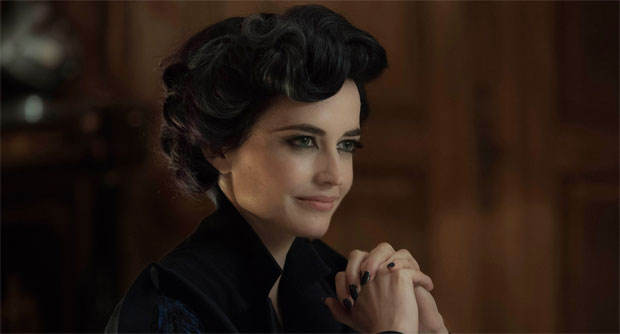 This setup is promising, weird and intriguing, until the film is anything but that. A silly twist transforms the film into an Avengers clone where these special children, led by the world’s dreariest hero and bully magnet Jake, can finally put their special powers to use. Surely there’s someone left in Hollywood who is bored by every second movie having the exact same third act where the villains are just killing time. Reducing the film to such a routine finish is completely dishonest on the part of the filmmakers. It’s still incredible how long Burton and his screenwriter Jane Goldman (X-Men: First Class and Kingsman) can fool us into thinking this will be a good movie and not a half-eaten duck egg. 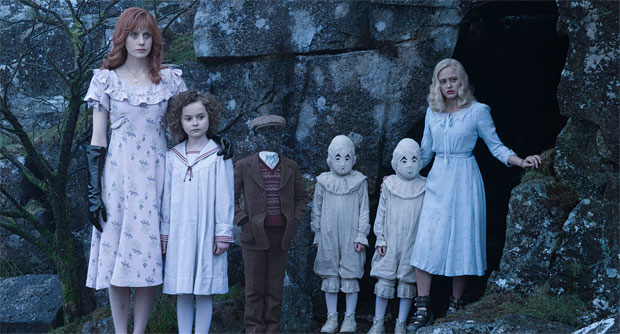 It helps that Burton’s occasional flourishes momentarily peel back our eyelids. Emma floating into the air with a rope tied around her waist and the bombers zooming in on the mansion as Flanagan and Allen’s Run Rabbit Run plays on the soundtrack are examples of Burton landing the right images and sounds. But sadly, the plot is a shambles. It touches on the aforementioned nonsense like time loops, mad scientist experiments, bitterness amongst the children and a father and son relationship, but fails to assure us that any of this is more than wet sand. 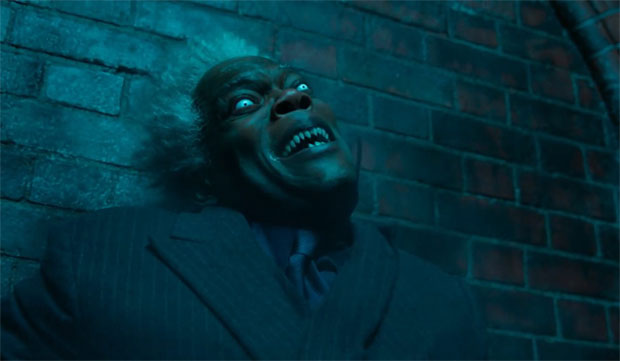 The tediousness and generic form of the film’s second half, involving the rescue of Miss Peregrine, is startling once a shape-shifting villain played by Samuel L. Jackson is introduced. Burton becomes so preoccupied with negotiating a sequel that he doesn’t even bother including Jake’s parents in the denouement, which is particularly lazy since Franklin disappears long before the end. How can the master of weird still lay claim to his title when he’s now a clear cut Hollywood sell out? It’s like Harry Potter, X-Men and Divergent where every child is special, everyone has a gift and there are no losers here!

That is, unless you’re unlucky enough to be caught by one of Burton’s monsters that stalks people and pulls their eyeballs out and eats them to immortalise a supervillain. Move right along small children, you need not apply. In the past, Burton’s style could be trusted both artistically and commercially when he wasn’t held captive by the studio, as was the case with Sweeney Todd. Now he’s merely attaching his name to computer algorithms. Who in their right mind ever believed that Tim Burton would make a great social conformist? 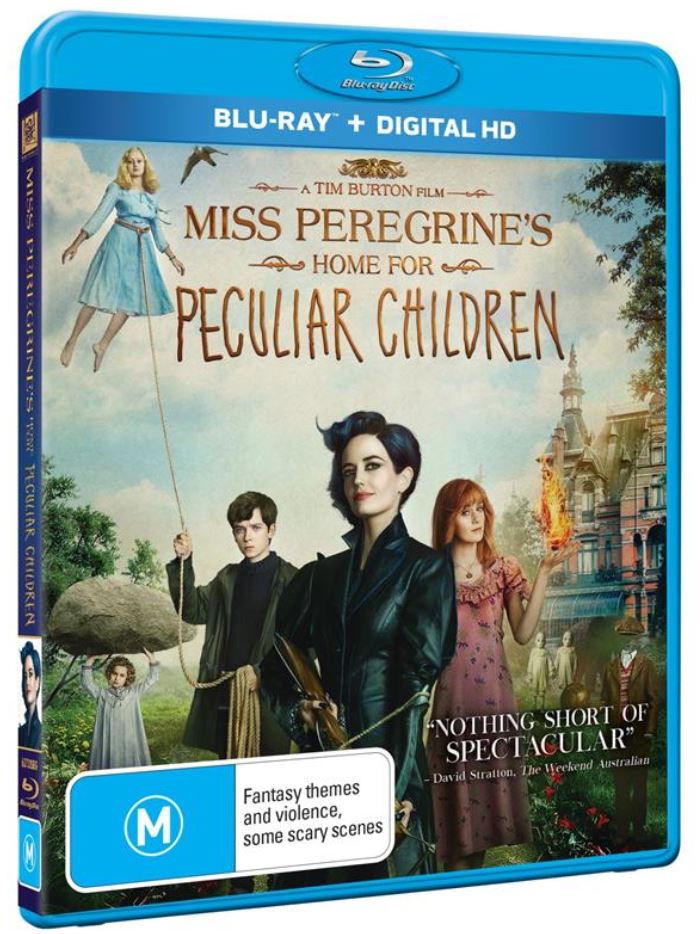