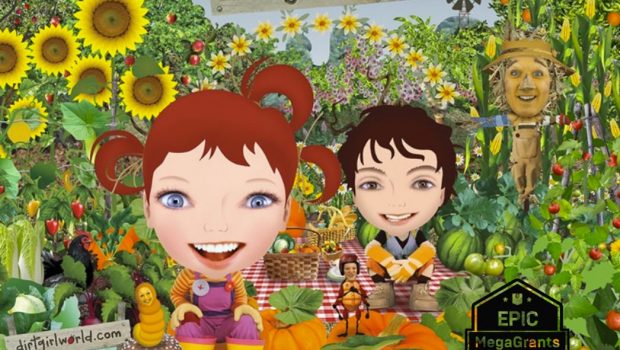 Miroma Project Factory are excited to announce that they have received an Epic MegaGrant from Epic Games, which will be used to deliver a dirtgirlworld mobile game using Epic’s Unreal Engine.
The support provided by Epic MegaGrant has enabled the development of a dirtgirlworld mobile game that will empower kids to explore the incredible world of worms, discover their important role in nature and allow them to set-up and manage their very own worm composting system and watch worms transform garbage into rich compost.
Launched in 2019, Epic MegaGrants is a $100 million (USD) program to accelerate work of talented artists and developers using Unreal Engine or enhancing the open source 3D graphics ecosystem.
“I’m thrilled that Epic Games sees the potential in the dirtgirlworld game. The Epic MegaGrant will help our team to explore and produce an innovative way to teach young people about the importance of composting using a fun colony of Earthy super-heroes” says Miroma Project Factory’s Managing Director, Kat Robinson.
The dirtgirlworld game concept will focus on gardening and composting using key characters from the Emmy Award-winning dirtgirlworld children’s television series.
Show creator, Cate McQuillen of Mememe Productions says “dirtgirlworld has always been about connecting kids with nature, inspiration and fun. Play that leads to confident doing, is one of our secret weapons in growing a generation of kids who love getting outside and getting grubby. Disrupting screen time with green time speaks perfectly to the alpha generation heartland. We are so excited to be a recipient of an Epic MegaGrant and to be teaming up with Miroma Project Factory to create this epic compost and gardening game.”
The game is set to release in late 2022