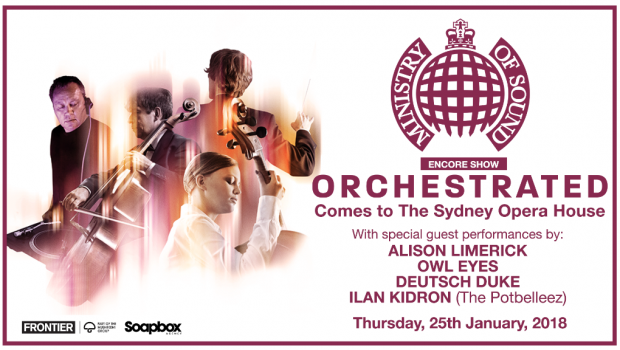 bFrontier Touring & Soapbox Events are delighted to announce lead vocalists Alison Limerick (UK), Owl Eyes, Deutsch Duke and Ilan Kidron will join Ministry of Sound’s Orchestrated on 25 January to perform at the prestigious Sydney Opera House. Following two incredible shows in Sydney and Melbourne earlier this year, Orchestrated returns bigger and better than ever to perform in one of Australia’s most prominent live music venues.

“Orchestrated truly was a celebration of dance music, delivering a mixed bag of symphonic bangers and a strong sense of togetherness” – Beat Magazine

Alison Limerick released her debut album And Still I Rise in March 1992, the same year she won Best Female Artist at the international DMC Awards. With a string of hit singles including ‘Time Of Our Lives’ and ‘Where Love Lives’, the latter of which went on to become a 90s phenomenon and a global anthem which all dance music lovers love and know by heart.

Deutsch Duke, one of this country’s’ most prolific urban electronic music makers marks an exciting new addition to the lineup. Having played a number of international festivals including Glastonbury with his band Electric Empire, Duke left the band in 2015 to start a solo project and has since collaborated with an astounding list of Australia’s most forward thinking indie artists including Flight Facilities, Gypsy & The Cat, Set Mo and Elizabeth Rose. As an incredible live performer, he has recently played the role as leading vocalist for Peking Duk’s national tour including their closing NYE Falls Festival performance.

Ilan Kidron, renowned multiple platinum-selling vocalist and songwriter behind The Potbelleez ARIA chart topping hits ‘Don’t Hold Back’, ‘From The Music’ and ‘Are You With Me’ has worked fastidiously behind the scenes for many of Australia’s leading talents including Jessica Mauboy and Tina Arena as well as international pop star Ricky Martin. With an extensive touring history across the stages and stadiums of Australia, Kidron has honed his incredible stage presence and is guaranteed to put on a show.

The Ministry of Sound Orchestra will return with an extended set, bringing even more of their signature electronica meets symphonica sounds back to Sydney on Thursday 25 January. Celebrating the most memorable dance tracks of all time, Orchestrated will rearrange, remix and reimagine your most loved dancefloor anthems with a live 50-piece symphony orchestra, acclaimed conductor Guy Noble, musical director Adam Sofo and the talented lead vocalists just announced.

Awakening your favourite party anthems, this incredible show at one of Australia’s best live and iconic music venues will have you dancing from start to finish. Tickets go on sale at 11am tomorrow, purchase tickets early to avoid disappointment!

THANK YOU for joining us to celebrate the best moments in dance music at our two very special Orchestrated eventsearlier this month ????Both Sydney and Melbourne shows were SPECTACULAR and both Frontier and Ministry of Sound Australia Events cannot wait to bring you more in 2018! ✨????????For all Orchestrated updates and announcements as soon as they happen, sign up as a Frontier Member ????frontiertouring.com/signup