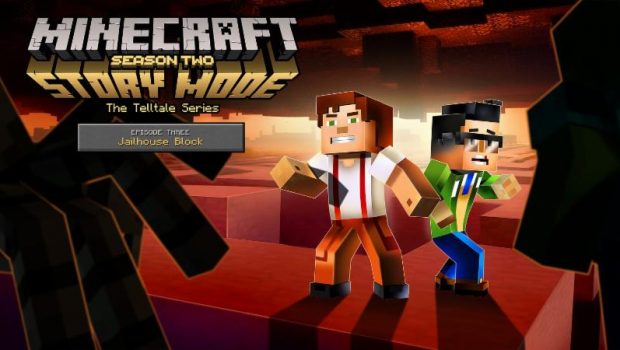 SAN RAFAEL, Calif., and STOCKHOLM, Sweden, September 14th, 2017   — Award-winning developer and publisher of digital entertainment Telltale Games and world-renowned game developer Mojang today shared a new trailer for the third episode of Minecraft: Story Mode – Season Two. Episode three, entitled Jailhouse Block, will be available for download starting September 19, 2017 on Xbox One, PlayStation 4, PC, Mac, iOS, and Android-based devices.
Having bested The Admin’s icy obstacles, Jesse and the gang are rewarded with a one-way trip to The Sunshine Institute, a nigh inescapable prison buried at the bottom of the world and filled with all manner of miscreants. In order to make it back home, Jesse has to find a way to break out, even if that means employing a few desperate measures…

Minecraft: Story Mode – Season Two continues Jesse’s saga in a five-part, narrative-driven, episodic game series developed by Telltale in collaboration with Mojang and members of the Minecraft community. Though players’ choices from the first season optionally carry over into season two, this new season will be accessible to both returning fans and newcomers alike. This second season will also include Telltale’s unique multiplayer ‘Crowd Play’ feature, which allows friends and family to engage with the adventure together by helping to decide the direction of the story from any mobile device with an online connection.
Minecraft: Story Mode – Season Two is a standalone product separate from both the core Minecraft game and season one of Minecraft: Story Mode. Season two is available for download on Xbox One, PlayStation 4, PC, Mac, iOS, and Android-based devices. A retail version on disc will become available this fall. Episode three has been rated ‘Everyone 10+’ by the ESRB.