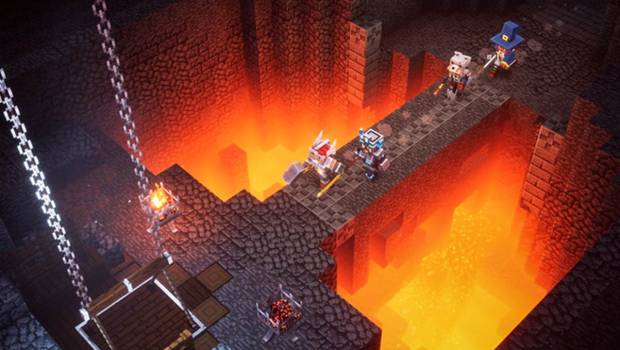 Minecraft Dungeons Launching May 26 by Mojang

We love a good announcement here at Mojang – no matter the type. Just this morning, my team announced that I needed to clean out my moldy old lunchboxes from the fridge. Can you imagine the excitement? The anticipation? The thrill? But we’re not here to talk about my trivial duties. We have much bigger things to share.

So sit down, take a deep breath, stand up, roll out the red carpet, pet your dog, and tell him he’s a good boy. Minecraft Dungeons is coming out May 26 on Nintendo Switch, PlayStation 4, Windows, Xbox One and Xbox Game Pass.

As you all know, we initially planned to release Minecraft Dungeons by the end of April. However, due to the current state of the world, this was no longer possible, as we wanted to guarantee the health and safety of our teams, and empower them to deliver the best possible experience to you, our players. We hope you’ll find it was worth the wait.

THE GAME WILL BE AVAILABLE IN TWO EDITIONS:

If you’re like me and want to secure at least ten copies without having to beg Executive Producer David Nisshagen and Game Director Måns Olson for them, Minecraft Dungeons will be available for pre-order on select platforms. If you’re on Xbox Game Pass you can also be ready to play on day one by pre-installing the game on console or PC – starting today.

To learn more about how you can pre-order your game, visit Minecraftdungeons.net.

Some of you might ask “What is Minecraft Dungeons?” I could in return ask if you’ve been living under a block, but I’d much rather explain it to you: Minecraft Dungeons is our new action-adventure, dungeon crawler-style game in which up to four players fight together to defeat the evil Arch-Illager and his relentless swarm of new-and-nasty mobs – one action-packed level at a time. Not only can you do so in the good company of your friends, you also have all forms of weapons, artifacts, and enchantments at your disposal. And if you still have questions, then let our handy FAQ answer all the whens, hows, and whys!

Minecraft Dungeons is a brand new, standalone game set within the Minecraft universe, with most of its blocky charm and challenges. You might not be able to place blocks or build a house made of cobblestone, but you’re still very much an adventurer exploring the Overworld.

Are there character classes in Minecraft Dungeons?

Minecraft Dungeons has no classes. In true Minecraft spirit, it’s all up to the player to build their own playstyle and identity with the items they equip. You are what you wear!

Will Minecraft Dungeons be available with Xbox Game Pass?

Does Minecraft Dungeons have multiplayer, and if so, how does it work?

Just grab your controller and jump right in! Minecraft Dungeons supports up to four players in both local couch co-op and online co-op modes. However, we do not provide you with an actual couch!

At launch, you´ll be able to play online multiplayer with friends on the same platform. We’re working to bring cross-platform multiplayer across Xbox One, Windows 10, Nintendo Switch and PlayStation 4 in the near future through a free update after the game’s release.

Is there matchmaking for online multiplayer?

No. Minecraft Dungeons is designed to be played together with your friends – either in a comfy couch or in a comfy online session.

Do the missions change from one game to the next?

Yes! Each mission in Minecraft Dungeons is a mix of procedural content and carefully crafted elements that tie into the mission’s objectives and narrative. In other words, while parts of the mission stay the same, the paths, mobs and treasure you find will be different every time you play it.

Yes, there will be! With Minecraft Dungeons – Hero Edition, you’ll get access to two upcoming DLC packs for free. We’ll share more information about these soon.

Why can’t I pre-order Minecraft Dungeons on all platforms?