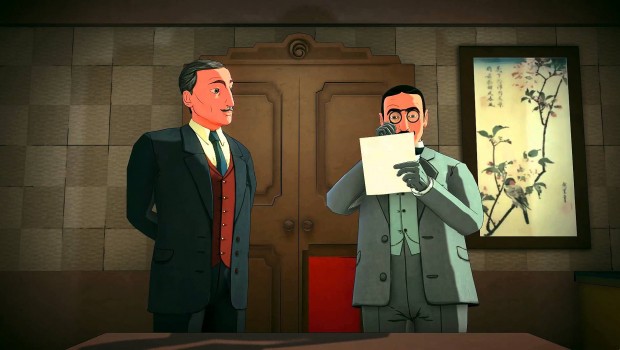 MINDSCAPE ANNOUNCES AGATHA CHRISTIE’S THE ABC MURDERS IS COMING TO PC, PLAYSTATION 4 AND XBOX ONE

In a story filled with many great moments of suspense, the player becomes Hercule Poirot, the most famous of Agatha Christie’s detectives. He or she will have to solve one of the most intricate cases the Belgian investigator ever faced. The player will have to collect clues from the crime scene, check alibis and confront witnesses and suspects to catch the serial killer known only as ABC.

Following extensive graphics research, the game has been developed with a very distinctive visual style. While remaining faithful to Christie’s Poirot and his typical environment, “The A.B.C. Murders” brings a modern touch never before seen in a video game adaptation of Agatha Christie’s novel. In addition to these exciting new visuals, players will find all the essential ingredients of a Christie mystery.

Has Hercule Poirot met his match?

Hercule Poirot receives typed letters signed by ABC giving the date and location of the next murder. ABC is working his way through the alphabet, leaving an ABC railroad guide with each victim: Alice Ascher is a tobacco shop owner killed in her shop in Andover, Betty Barnard is a flirtatious waitress killed in Bexhill and Sir Carmichael Clarke is a wealthy man killed at home in Churston. Why would ABC write to Poirot instead of the Scotland Yard or any reputable newspaper? With Britain in a panic, the fate of the nation is now in the player’s hands!

Aspects of gameplay designed to test those little grey cells

Agatha Christie: The ABC Murders will be available exclusively through JB Hi-Fi.

According to Guinness World Records, Agatha Christie (1890 – 1976) is the most successful novelist of all time with more than 2 billion copies sold. Known as the Queen of Crime, her 66 novels, 154 short stories and 19 plays have been translated worldwide into over 50 languages.