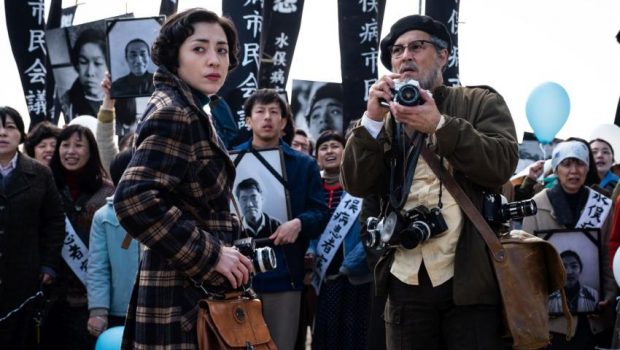 Summary: A biopic of a style that used to be a lot more popular but not so much these days. A worthwhile film but you have to be in the right mindset for it and be ready for what it throws at you.

Johnny Depp stars as W. Eugene Smith the famous US photojournalist responsible for one of the most famous photos of the 20th century “Tomoko in Her Bath, Minamata, Japan” and what happened behind the scenes for him to get the series of photos behind the mercury poisoning of the village of Minamata in Japan by a chemical company.

At the beginning of the story Eugene Smith is still suffering PTSD from his experiences as a war photographer and is basically waiting around to die. There are scenes from his shooting his “Jazz Loft” series of photographs or at least the same place where they are shot. His editor (Bill Nighy) at Time Life has had enough of his artiste ways and gives him one last royalty check. Things change when a crew arrives for a Japanese film ad and young Aileen (Minami) says she only took the job to try and get Eugene to cover the story of the what is happening in Minamata.

His editor does agree to front up to allow him cover the story but this is the last time and we arrive at the village in Japan where the story continues.

A solid performance by Johnny Depp in this one even though his character is meant to be older than Bill Nigh somehow. Leaving aside everything going on with Johnny Depp outside of his movie roles and how he became a walking meme for his roles in Tim Burton movies he is still a good actor if he has the right role and I hardly even noticed it was him in this movie as he does not do the usual things he would do in a usual role.

I did appreciate the darkroom scenes and it does seem very nihilistic of Eugene to be smoking while developing his film as those chemicals are famously flammable. I do not have any real nostalgia for the darkroom as I never shot on film and I have taken so many photos on digital now. I did enjoy the scene where he gives away his camera to a kid and they have to get the locals to donate him camera gear.

Jun Kunimura makes an appearance as the head of the chemical plant causing the pollution and straight up offers Eugene money to turn over his negatives saying the company has a “line item” for such things in their budget. When this does not work the company sends in the Yakuza. W. Eugene Smith died as a result of injuries suffered in one of these attacks and never took any photos after this assignment, but what a way to go out.

As usual in movies they do compress the timeline somewhat, the events of the film took place over a couple of years and not the couple of months it seemed in the movie. It did take the photographer a long time for them to gain the trust of the locals and the famous photo was staged with the help of the family as well as his assistant Aileen. They do not use the exact photos in the movies but do show recreations of them,

The film is quite a lot longer than a lot of the movies I have seen lately but it does not outstay its welcome, if anything they would have had to leave a lot of things out or the movie would be much longer and a lot slower.