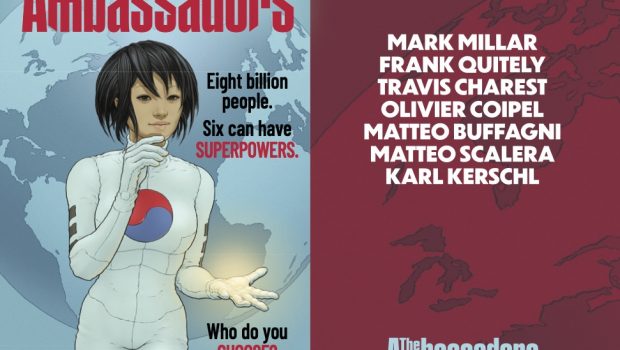 Bestselling dream team Mark Millar and Frank Quitely launch the first issue of The Ambassadors in March with a checklist of white-hot artists handling each of the six interconnected issues. The lineup includes: Olivier Coipel, Travis Charest, Matteo Buffagni, Karl Kerschl and Matteo Scalera—a wish-list for any comic book fan.

This six issue Netflix miniseries will hit shelves in March from Image Comics as part of the highly anticipated “Big Game” summer event being prepped by Nemesis: Reloaded (with superstar Jorge Jiminez), Night Club with Juanan Ramirez, and the brand new volume of The Magic Order—currently being made as a huge live action show for the streamer. The Ambassadors will lead directly into the big 2023 Summer event BIG GAME, where all the Millarworld characters from Kick-Ass, Kingsman, Starlight, Jupiter’s Legacy, and more, come together in a huge adventure drawn by Marvel superstar Pepe Larraz.

The Ambassadors #1 will also feature variant covers by Larraz and Gigi Cavenago and give us a superhero comic unlike anything we’ve ever seen before.

“The idea for this is actually incredibly simple. Superheroes have always felt very American to the rest of the world, but what if the scientist who cracks the super genome is in Asia? What if this genius billionaire Korean girl launches the world’s first real-life super-team from a headquarters in Seoul and it all takes off on the other side of the world with America watching like they watched the USSR putting the first man in orbit? What’s exciting is that this opens us up to doing completely fresh kinds of superhero stories and this one has a Willy Wonka appeal,” said Millar. “This scientist putting out a message to the world to volunteer their services and say why they deserve superpowers. It’s a global competition and only six people will be chosen out of eight billion. It’s worked out GREAT and I’m really excited for people to see this. I started working on it back in 2018 and some of the artists are so brilliant and so committed to their work they’ve spent four years on their single issue. It’s going to blow your socks off when you see this.”

This new series promises an enormous story about ordinary people from around the world and explores what makes a select few worthy of power.

The Ambassadors #1 will be available at comic book shops on Wednesday, March 29.