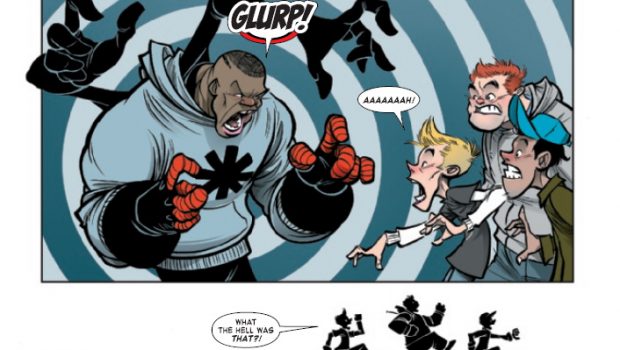 Summary: Easier to work out what is happening than a lot of series that are this far into the run. The bonus story was fun and Switch is an endearing character for someone who can't talk.

Some stuff has happened and Miles finds someone has put in a copyright claim for the Spider-Man name. Miles meets up with one of his clones and they go off to track down a secret installation in search of the manufacturer of some technology that was on a villain they took down.

While a lot of stuff has happened before in this series, it seems like this is off in its own part of the story and you didn’t really need to know what happened. As usual they have refences during the story if they refer to the something that happened that is important to the plot. If you are already a fan you would have read it.

There is a special story of just Shift eating a kebab and scaring off some hoodlums so he gets another kebab for free. It was sweet story and he has a lot of character some someone who can’t really talk.

I would recommend this one if you are a fan of this version of Spider-Man and have already been following this series. It does seem pretty late in the series to pick up if you have not been but not impossible.