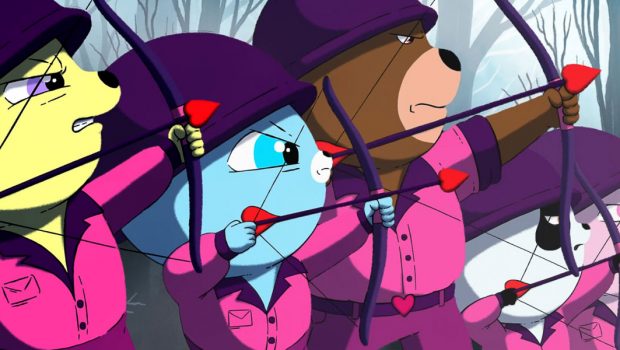 Summary: Does exactly what it says it is going to do. Slightly fumbles the metaphor and overdoes the religious stuff for my liking.

I was looking forward to this as I had seen Unicorn Blood (2013) at the WTF Shorts program almost ten years ago.

This story takes the concept of the short and expands it into a full story of an ancient enmity between the unicorns and bears that has continued through to the present day. There are those who are using this conflict to their own ends to keep themselves in power but the unicorns know what is really at stake if they are to lose.

Blue and Tubby are two recruits going through basic training at Love Camp where Blue is trying to become the perfect soldier, even it means selling out his brother Tubby. Things do not go all Blue’s way and he gets harshly treated himself. When the powers that be decide the unit is perfect for an operation that needs someone extendable they are sent into the unicorn forest to investigate.

While it does warn of graphic violence before the movie the effect of it does wear off after a while it is cartoonist violence for the sake of it and having the supposedly “cute” characters kill things and get horribly mutilated is supposedly meant to be the big thing for this movie.

I did work out better than what I thought it would be but still gets a bit stinky towards the back end fumbling the metaphor and the heavy handed religious themes used as a justification for the eternal war.

It is good enough for what it is and is 100% what it says on the box. You are not coming to this expecting anything too insightful just cute teddy bears versus unicorns.