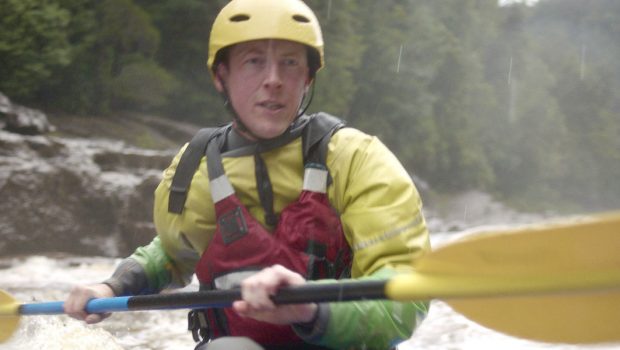 Summary: While you may think you know about the Franklin River dam protest it is not the whole story. An eligntening documentary telling the story of the campaign by going down the river itself.

When it was going to be built  all the odds were against the campaigners in the Tasmanian Wilderness Society as they had previously lost the battle for the Lake Gordon-Pedder dam and the HEC and Tasmanian state government was determined to dam every river in Tasmania and turn the state into a manufacturing hub.

The blockade of the river came towards the end of a seven year campaign as all other options had failed. The documentary not only shows the contemporary journey by Oliver but also retells the campaign and how various activists came together to win over the media, politicians and public.

As was said in the panel discussion I went to during MIFF they do mainly tell the story of the activists as there is not really anyone around who would still say they supported the dam these days. Even the contractor who was working on site at the time said if it happened today he would be opposing the project.

The journey does take a toll on Oliver who still had they’re knee in brace at the panel event which they injured on the first day of the journey. When the machinery arrives on site it does look like the activists have lost the battle and even the change of government does to guarantee it would actually stop being built as it had to be decided in the High Court.

This is a rare example of an environmental story that has a happy ending and is being used as educational tool and to campaign against the new anti-protest laws that are seen as threat to democracy by the film makers. The current fines were regarded as “a fee for participating in democracy” but the new ones bring serious jail time and substantial costs which will be used to suppress opposition by the powerful as always happens.

An excellent documentary that hopefully gets a lot of people going to see it and is shown widely in schools and to other interested parties to raise awareness.