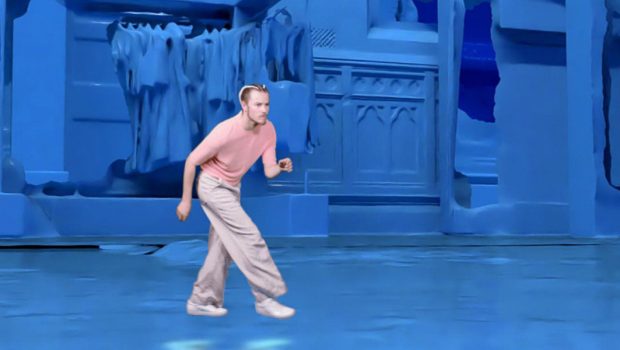 Summary: "asexual artist had a cooking and tasting party when they had their genitals surgically removed"

A woman approaches a car with a running engine only to find a man attempting to commit suicide, he is not too happy to be rescued and tries to float away but she catches him. They have a very confrontational dance but eventually end of moving together.

Dance is a non-verbal medium so it can say a lot of things you can’t with just words. The emotions on display here are the highlight of the piece as they do show the man’s desire to float away from his troubles being in conflict with the people who want him to stay and who will fight to save him.

A good setting with the woods and having the car in the middle of nowhere where he thought he would not be disturbed.

This is a well told story through the medium of dance and worth your time.

What starts off as a relatively normal dance piece but also with drones becoming part of the dance as they are synchronised with the dancer becomes something strange and dislocated and then finally just avatars dancing around as various people talk.

I admit I liked it at the start, but it just got more annoying as it went on. I go looking for this sort of stuff usually but almost could not make it through. That’s the good thing about watching these shorts online you don’t have to watch all of them you can just stop if you want.

I did like the old school 3D computer graphics at the start but it went too abstract for my liking and seemed hardly about dance at all by the end. Surely you could have just showed some clips of people dancing from games and it would have been the same?

TikTok seems to be a big platform for showcasing dance but this does not touch on that and goes off on its own tangent. If you like that sort of thing then jump right in. I am not going to explain the context of that quote either, best look for yourself.

A 2020 large-scale participatory-dance work choreographed by the acclaimed Stephanie Lake expresses the inexpressible in lockdown. This documentary shows the behind the scenes work that went into creating the piece and what the dancers ended up doing during the lockdowns when they could not be in the studio for seven months during 2020.

As they said everything about dance was turned against them due to the COVID19 restrictions and another dance teacher said she never believed the plot of Footloose would become true until it was.

They could only train 20 of the dance leaders outside to lead the eventual number of 400 and they had to have them follow along on the day and hope that it turned out well.

This is a lot to put on the dance leaders and also the people involved as the only mass dance event I was involved in took at least a month of lessons just to do the refresher.

The piece does come together well as it is more of a call and response type dance movement piece with the space, the colour coded dancers and the different people involved coming together well.

This was my favourite of all the dance shorts as it had the most coherent story and it was something I was familiar with having done dance classes before.

A revealing, deeply personal account of artist Jocelyn Tribe’s life finding out about her ancestry as a mixed race person of colour in Australia. For a long time she did not know who she was but only knew she was different. She used to cry when the other kids made her be the Yellow Power Ranger all the time.

Later on she finds out she wasn’t an accident and her father is Indonesian, but the pandemic has prevented her travelling to the country. She has started learning traditional Indonesian dance and feels a connection with the other people in the group.

This short also explores how it is sometimes better to deny what you are rather than accept it, but only for so long as you eventually have to accept it to grow and develop as a person.

The dance in this was very personal and related to Jocelyn’s feelings as she talked about her experiences. There was some traditional dance towards the end and the title was explained with the fabric that ties both her identities together being known as Poleng which is traditionally black and white, but blends together when you move it.

Dancer Michelle Heaven explains shooting a dance/art piece that may or may not actually be real. There is a grey area as to whether it is a documentary or made up for the film.

While there is some dance shown here it is more of a performance art piece with a lot of thrashing about, wrapping things up with a bow and stories of strange occurrences on set.

It is very well produced and I did like the use of the gold fabric and projections on the curtains. There is not really a coherent plot but that is expecting a bit too much from it as that is not what it is about