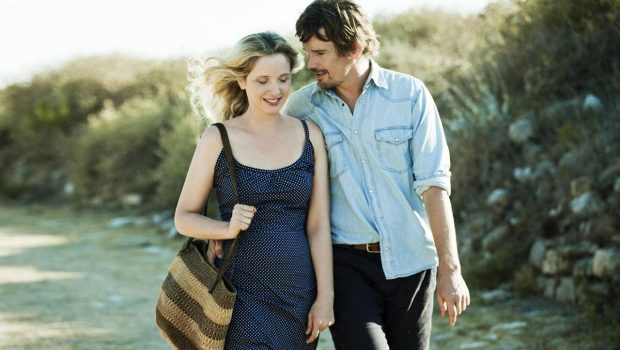 The third film in Richard Linklater’s trilogy, after Before Sunrise and Before Sunset, is the most satisfying and complete of the revered series. Most sequels grow stale by resting on the formula of their predecessors. The strength of this trilogy is that each episode, filmed nine years apart since 1995, reflects a new perspective on the changing relationship of its central characters Celine and Jesse. This has prevented the series from losing its essentiality because with each addition the characters and their attitudes to life and each other have changed over time and feel anew.

One of the unique aspects of the trilogy is that it is compromised almost solely of dialogue. This is rare today when Hollywood films prefer action and effects over dialogue and character. There are only five or six sequences in Before Midnight, each one comprised simply of characters talking. These conversations are rich, purposely reflecting how relationships are tested by time and conflicting perspectives. While the previous two films merely teased the possibilities of Celine and Jesse’s relationship, Midnight reflects the consequences and the regrets they have about their choices. It leads into some huge fireworks but refuses to exchange the depth of the series for pure melodrama. It is still funny, deep and personal, often achingly so in its long and authentic exchanges.

Julie Delpy and Ethan Hawke reprise their roles as Celine and Jesse, who are now an unmarried couple, with twin girls of their own. Jessie has divorced his wife but is struggling with being separated from his son Hank (Seamus Davey-Patrick). While holidaying in Greece, Jesse and Celine debate the idea about them moving to the US so that they can see Hank more often. Celine is reluctant, considering the possibilities of a job offer instead. Some later discussions talk place in the villa of an elder writer named Patrick (Walter Lassally), who is housing them and some other Greek couples. One of Celine and Jesse’s most heated conversations takes place in a hotel room, which tests the increasingly brittle foundations of their relationship.

The screenplay by Richard Kelly, Delpy and Hawke draws a complex binary between the speed of time, dwelling on the irreversible events of the past, and fixed perceptions that force one to look too far into the future. The source of Jesse’s anguish is not simply his current separation from his son but being divorced from the irreversible years of Hank’s life. His plea to move back to the US is fuelled by preempted nostalgia for his son’s teenage years: “If I miss these years, they’re never coming back.”

Celine’s pessimism stems from a culture clash, believing they won’t be happy back in the US, and predicting that this is how people breakup, comparing their relationship to a ticking time bomb. Her conflicting perceptions of time are amplified by her resistance to autograph Jesse’s novels, containing semi-autobiographical details about their relationship. There are also brighter, romanticised feelings drawn from loss, with another character reflecting on how they were still able to still see all of their miniscule details of their partner after they had gone. It’s suggested that it is important not to love one person but to have a love of life by reflecting on those fleeting moments while you still can.

The film’s various ruminations on time and space are embodied by Linklater’s camera as it lingers over the handsome Mediterranean setting. One of the more amazing scenes is a car ride conversation that is sustained for nearly fifteen minutes without a single cut. The naturalism of the scene is exemplified by the director’s insistence that every word of dialogue was written down and not improvised. The duration of the medium shot, framing Jesse and Celine together, demonstrates how they exist in the same spectrum of time but through their bickering they often forget how lucky they are to share the important moments together.

Colour and space are used distinctively, with red and green primary tones enriching the vibrancy of the domestic scenes, while in the hotel room the spaces are more contained and the tones drab to infer a claustrophobic tension. As the couple argues, the reverse angle shots and deep lenses fracture and separate their spatiality to remind us of their conflicting beliefs, drawn from perception and nostalgia. Both performances achieve an unbroken magnetism, supplied by the director’s willingness to provide his actors with as much time and space possible to invigorate these roles.

Although we have seen many films examine relationships, few have analysed the couple via the framework of insightful philosophical musings and with such an intelligent and consistent discourse. How many romantic comedy-dramas are sophisticated enough to have conversations veering from gender roles, the inevitability of death or the dread of spending another fifty years together? The film is about the way time and age have believably shaped the once optimistic and impulsive beliefs of both Celine and Jesse. It is not just a ‘boy meets girl’ story. Its ‘boy meets girl and realises they’re going to die someday.’ It encompasses all the troubling realities that Hollywood likes to shield from us.