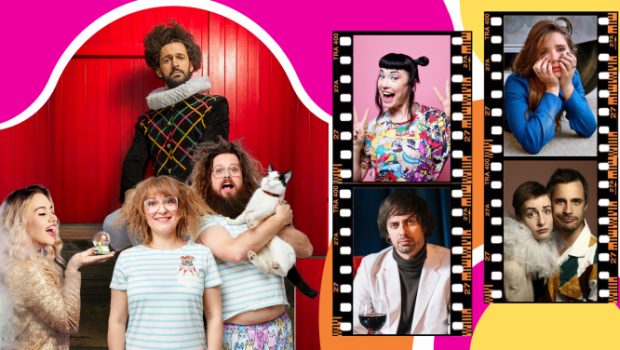 Summary: A fun show and something different even if you have seen the videos of the particpants in the show.

Great first stop for the evening

Shows every Friday and Saturday during the comedy festival at 5pm

I had already booked two other shows in the evening but saw Bec Hill’s face come up on one of my Instagram follows and was intrigued by how they were going to have her in the show seeing that she lives in the UK and has not come back to Australia.

The second surprise is seeing Janet A Mcleod on the door as I had not really looked at the details for the show when I booked it. Janet ended up being part of the show which was also great as I had not seen her do an actual comedy festival show since 2004 in the same venue. Yes, I have been to the Cinema Fiasco commentary Janet does but it is not as interactive with the actual film.

If you know the background of the venue the show is actually funnier as a lot of short film programs screen there and the show is based around the “Incredibly Serious Melbourne Short Film Festival” with snooty host (Janet) that goes off the rails when the venue staff start interacting with the films presented.

A lot of these shorts are well known now and easy to see online so it was great to see them presented differently. Some of the biggest laughs were from when things went wrong and didn’t work the way they were meant to.

Janet played a great “straight” role as the host and I have not seen the Two Little Dickheads or Garry Starr before. Garry Starr ended up in a couple of the videos with the performers including a very funny one with Michelle Brasier.

I am being deliberately vague with what the actual films are as it is best to find out for yourself and you could probably guess which one it is going to be for each of the performers. I don’t want to spoil the extra bits they do live as that is the most fun.

Special thanks to Sharny for finding me a lounge seat and putting my bag away so people didn’t trip over it. It was her Instagram I saw the show advertised on so that is a good thing.

I would recommend this show if you are already in the CBD on a Friday or have some time before any shows in the early evening on a Saturday. As it happens I had plenty of time to go have dinner after and get to my next show at the Butterfly Club at 7pm.