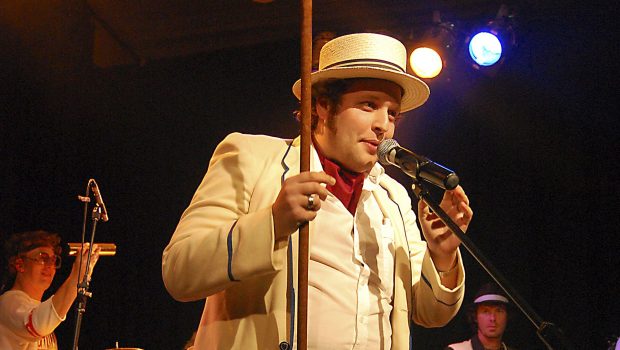 Summary: Well worth your time even if you are not a fan of Gilbert and Sullivan musicals.

One of the musically inclined

I was looking forward to this show a lot even if it was just Andrew singing the song that is just his name over and over for an hour. Over the years at the comedy festival, I have seen Andrew’s various shows about pirates, mixtapes, being a modern gentleman, time ninjas, the Roman Empire and singing in various ASRC benefits.

The show is based around pitching an actual musical Andrew has written based on the works of Gilbert and Sullivan to an imaginary Australia Council panel. As all the music is the same and just the lyrics are change there was an opportunity to sing along in the choruses.

It is a very simply staged show with just Andrew and his accompanist Martine Wengrow on the organ to do the songs and play all the roles in the cut-down pitch for the musical.

A high-energy show with lots of fun songs and even when things go wrong it all seems to be how it was meant to go. I did laugh at Andrew having to explain one of the jokes due to no one laughing but that is just as I have seen him so much.

Was great to see his old buddy Lawrence Leung there filming the show for posterity and some of the audience looked like they are doing shows themselves. You can tell when a show is doing well when other comedians take time out to see it as it is a very busy time of year for them.

The show has sold out its run so you can’t see it now, but there is one more performance online for those who missed it or could not make it. A lot of shows only had a short run this year for obvious reasons.