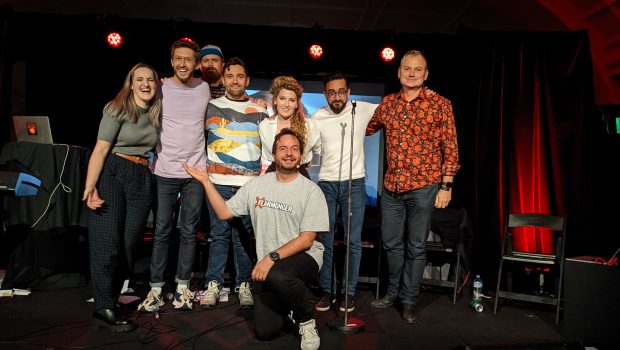 Summary: Great to finally see this show live and well worth a listen when they release the recording later in the week.

The news with laughs

I have been listening to A Rational Fear for a few months and was a Patreon subscriber until recently so was thrilled that they were finally going to do a show in Melbourne. Due to the COVID19 restrictions I wasn’t sure it was going to happen but everything lined up and I booked a ticket early.

The show is a weekly news podcast with special guests that they usually record live on a Thursday night and then release it the next day. For the Patreon subscribers you usually get an early notice of the guests and a link to watch it live.

I had listened to the 100th episode show that was recorded up in Sydney and it sounded really fun and also the time they had Ray Martin on as a guest. The previous week Kahmal called in to discuss the issues on the week and managed to surprise everyone by sitting on the phone quietly and coming back at the end.

Due to the comedy festival being on Alice Fraser had her show overlapping with the start time of the podcast and did not arrive to a bit later in the show.

I do listen to a podcast in the USA that is recorded live, but that is a bit different to this one and wanted to see how this one would go live. The host was a bit worried about booking such a large room, but should not have worried as there were a lot of people there and he even went on the podcast about the Late Show a couple of weeks before to promote it.

There was a general discussion of the week’s news and then each person got up to do their bit during the show.

I had seen Sami Shah during the comedy news desk segment on Delivered Live online but had never seen him live. I thought he went well and I even learned something from his bit about the law firm that Peter Dutton is using for his defamation cases.

Simon Holmes à Court was the expert guest on the panel relating to climate change as the format of the show is they have one person per week that the other panellists get to talk to and ask questions to. Another informative segment.

I used to listen to the Bugle podcast when John Oliver was on it and might have heard a bit of Alice Fraser on it but have not been keeping up. Her piece about NFTs and bitcoin was really funny and it was great to see a new perspective on it.

James Colley was funny enough, but I can’t remember what he talked about, I will have to listen to the podcast again.

Lewis Hobba appreciated not being bound by the rules of a government broadcaster and managed to push the line as watching the reactions of some of the panellists was funnier than what he was saying at times.

I was looking forward to seeing Gabbi Bolt so much and Dan said that people were coming up to them on the street to say how much they loved her after seeing her work on TikTok. It is her first visit to the Melbourne International Comedy Festival and it was great seeing her post about going to see shows the weekend before and making new friends.

Her songs were really funny including a new one just for the podcast and the famous Love song for an Incel.

What I enjoyed more was watching her reactions to the other panel members as she seems so honest and wholesome and had really did not know that the other people on the panel were going to go that far for the joke.

I did get to say hello to Dan before the show, but was so happy I managed to meet Gabbi on the street and get a selfie with her before I left. I did ask if she was going to anything else at the festival and have since found she is going to do an online show on Tuesday at Max Watts.

This was a great show and I will try to go next year if they have it at the festival again. No doubt Gabbi Bolt will be a lot more famous by next year but hopefully everyone will be able to make it again.

You can listen to the podcast of this show at the end of the week and I will drink my “JagerPfizer” knock off vaccine they stuck under the chair at the show while listening to it.