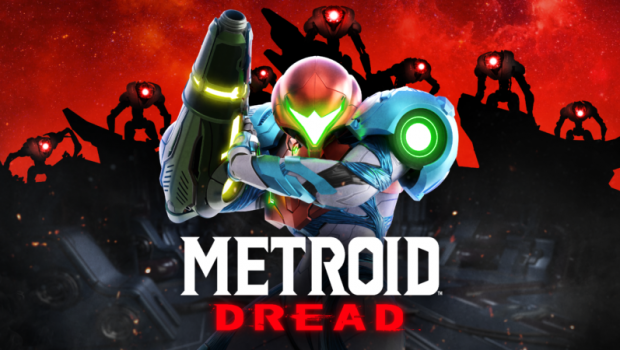 Summary: Another must-have Switch exclusive, and a modern reminder why the mother of the Metroidvania sub-genre still demands attention.

Metroid Dread, the sequel to Metroid Fusion, is 20 years late, but it puts up plenty of good reasons why the mother of the Metroidvania sub-genre still demands attention. Dread is not only a visual showcase, but a fast, responsive, and most importantly fun new entry that offers more of what fans have come to expect, while bringing modern design sensibilities that bring it up to speed for a new audience.

For those unfamiliar, Metroid Dread is a side-scrolling action-adventure game played in a 2.5D perspective, and interweaves elements of platforming, shooting, and puzzle-solving gameplay against the backdrop of a mysterious, sprawling map you must explore and conquer to survive. In Dread, the Galactic Federation sends Samus to the planet of ZDR to investigate the survival of a dangerous parasite thought extinct, and, as always, she finds a bigger threat lying in wait.

The game is light and snappy on the narrative, but the way it presents its story, and peppers its setting with environmental storytelling and tid-bits of lore feels carefully balanced to appeal to long-time fans and intrigue newer ones. What follows is a lot to do with Chozo, the ancient, sage-like race of aliens that play a big role in the series to-date, references to preceding events in 2002’s Metroid Fusion, and Samus waking up without all her suit gear or abilities, again (oh, Samus). The story starts off basic, focusing on her journey through the labyrinthes of ZDR to recover them, but the second half ramps up the exposition and stakes to a compelling degree. I found it all well-paced, and never tiring or boring.

There are many cutscenes, too, shown at pivotal story moments or when discovering a new boss or area. These are action-packed, tense, well presented, and show off the impressive graphical engine and artstyle of Dread. They also demonstrate just how bad-ass Samus is as a bounty hunter against the scariest of hostile aliens. Crucially, cutscenes are never too long, either, and can be skipped (handy after dying to the same boss over and over). I found the ‘show, not tell’ style of storytelling and presentation refreshing, with enough mystery and a healthy mix of sci-fi and the mystical to satisfy. 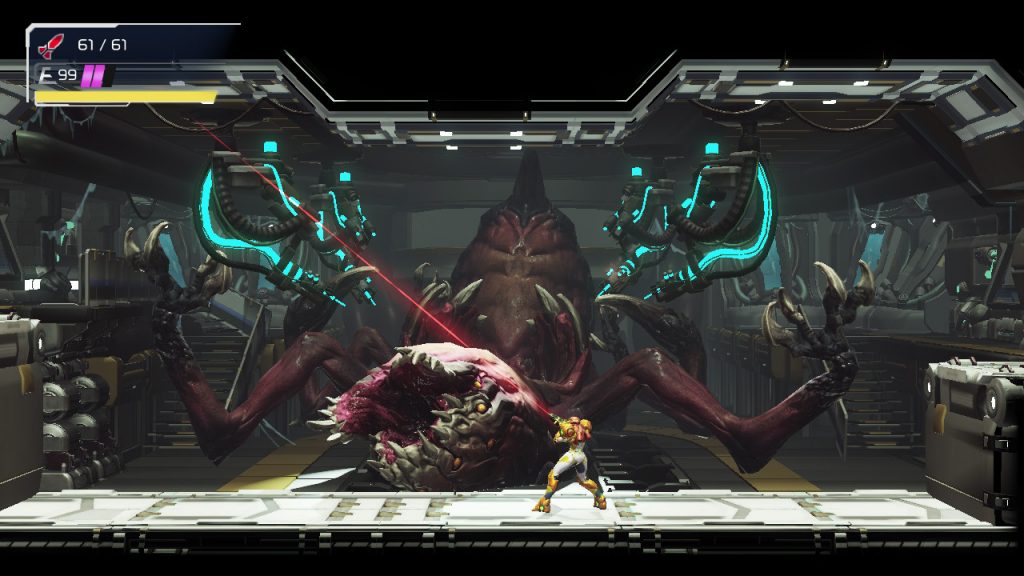 The fast, frantic and fluid core gameplay loop and level design of Dread is a modern reminder of why this Nintendo franchise coined an entire video game genre. It wastes no time throwing you into unknown alien territory with only your standard beam gun and missile launcher to protect you from its many dangers, but you can set forth and explore the open map at your own pace. Each zone of ZDR is sprawling, visually distinct (think cold, industrial facilities, lava-covered caverns, overgrown forests, foreboding robotics laboratories, ominous star-ship corridors) and filled with winding paths, out-of-reach items, environmental hazards, enemies, puzzles, hidden secrets, bosses, and locked doors protected by various mechanisms. All require careful back-tracking, problem-solving and re-visiting zones to solve and survive, and I found the tried-and-tested formula of finding the right tool, and returning to open a once inaccessible area or secure a powerful new item remains a satisfying pay-off.

Eventually, you’ll find new and stronger weapons and abilities (Varia suit, morph ball, charge beam, etc) that let you traverse the world faster and more effortlessly than the beginning, and interact with various environmental obstacles and mechanisms in different ways. If there is one thing that stands out more than other games, it’s that jumping, sliding, running, aiming, and shooting feels incredibly rhythmic and smooth. You’re given a great deal of control thanks to the tight controls, and the 60fps performance during gameplay ensures timed QTE inputs are exact, and combat and movement is responsive, and never frustrating. This was most appreciated during the multistage boss fights, a lot of fun to conquer largely due to the variety in Samus’s arsenal, and the level of precision available. 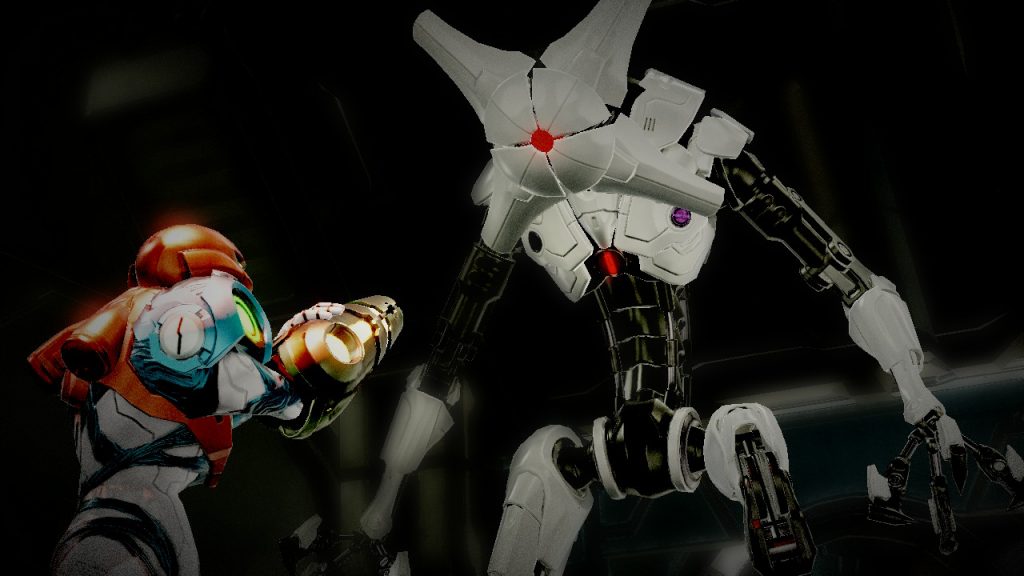 In certain areas of each map Samus is put up against a special mini-boss type enemy called E.M.M.I., stalker-like robots that can’t be killed with normal weapons fire; they, however, can kill Samus very fast if they catch her (with only a slim window for a counter move if the worst happens). Getting around the patrolling murderbots demands fast reflexes and thinking, and it’s exhilarating to stay one step ahead while avoiding putting Samus in a dead-end. Later, you get specific tools to hide from E.M.M.I. and even kill them; the tension I felt outsmarting an  E.M.M.I. by turning invisible and jumping away at the last second was both adrenaline-inducing and enjoyable at the same time. Beating these special foes feels well earned and never tedious, in the way stalker-like enemies in other games come across, as even if you’re caught, the speediness of Dread and its load times gets you back into the action fast.

All in all, the game takes a classic formula and runs with it, while introducing its own flourishes. The atmosphere is as oppressive as the older games, the moment-to-moment gameplay is reminiscent of newer survival-horror titles, and the game’s progression system feels just right; you start off weak, but naturally pivot into the experienced bounty hunter Samus is treated as in cutscenes, and the state of the map actively changes as you complete objectives and advance the story. The slow realisation you’re working your way from the bottom of the map is masterfully done, reinforcing its themes of isolation, and the terror of the unknown the game tries (and succeeds) to evoke. The best part of the package? There’s no extra fat. Every bit of content is as long as it needs to be. 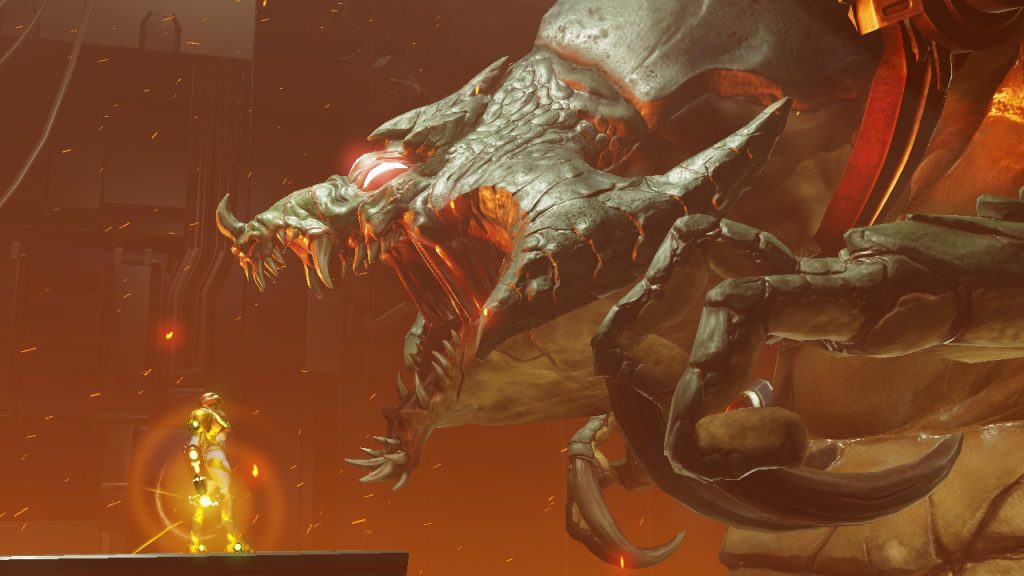 In regards to graphics, Dread stands with the best looking and performing games available on the Nintendo Switch. Mercury Steam have merged crisp visuals, colourful detail and buttery smooth animations to the signature, oppressive artstyle of the Metroid franchise, in a way I haven’t resonated with since 2002’s Metroid Prime. The adherence to 60 frames-per-second also makes it feel a joy to play, even as you’re running for your life from the latest big boss. There are dips during busier cutscenes, but overall the entire game is a looker – especially if you have the new OLED Switch.

Whether you’re a long-time fan or new to the series altogether, Metroid Dread is one of the best looking, compelling and fun new exclusives on the Nintendo Switch today. It contains many familiar tropes of its old-school side-scrolling roots, while repackaging the formula with modern design and gameplay considerations. Another must-play Nintendo first-party title, and one of 2021’s best games. 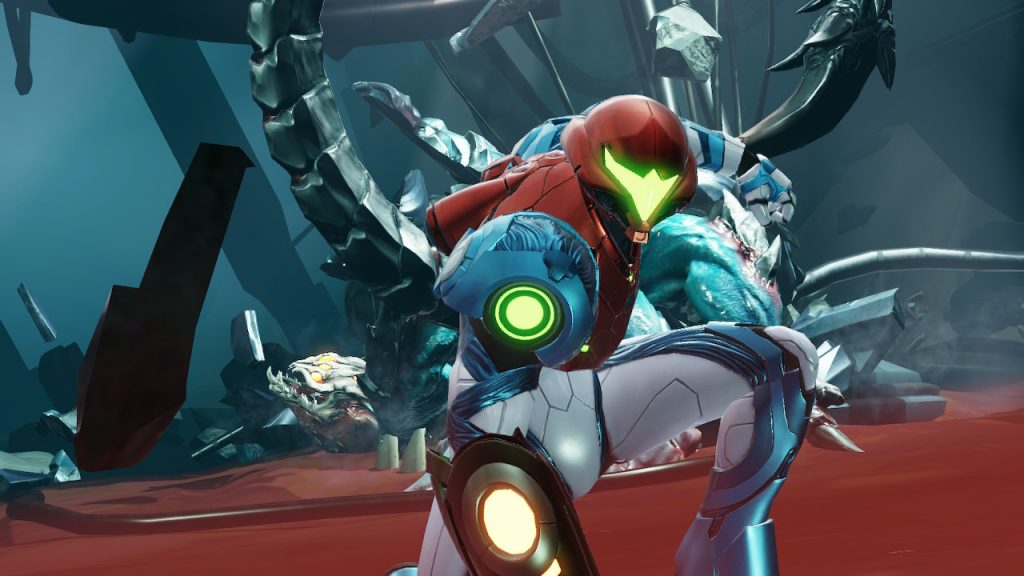