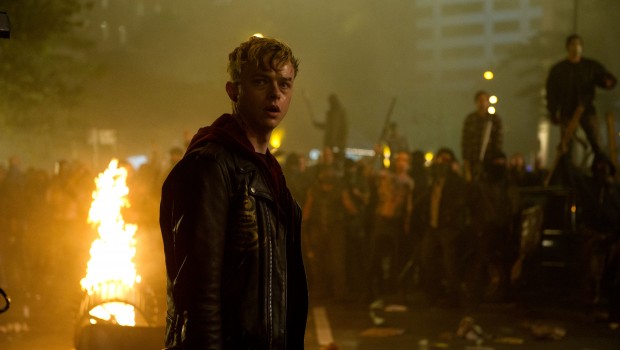 Never seen a live Metallica stadium show before? Not to worry. Here’s your chance with Through The Never – half concert footage, half horror-themed music video, with very brief behind-the-scene glimpses into the roles of tattooed roadies and tech operators.

Through The Never is more of a concert film than a documentary, as there is no voice-over narration or any talking-head moments from crew or band members. Structurally, the film is made up of sections of live performances that are interrupted by the subplot of Trip (Dane DeHaan – Harry Osborn in the upcoming The Amazing Spider-Man 2), a cherub-faced roadie/intern, who’s given the task of refuelling a stranded tour truck. Oddly enough, he never manages to do this. Instead, when Trip arrives at his destination, he’s met by zombie-like rioters, who clash with heavily armed police. Cue Molotov cocktails, hanged people, self-immolation and a magical hammer. It’s all very showy, but in a fun way.

Through The Never is geared more towards diehard fans dedicated enough to purchase cinema tickets, and less towards nonbelievers and the metal-curious. At times, the concert did seem a little repetitive and claustrophobic. For the most part, from an outsider’s perspective, there seemed to be no obvious difference between songs. Sometimes, it sounded like one endless flavour of electric guitar thrashing and drumming – with the exception of the more familiar songs, ‘For Whom the Bell Tolls’ (used in the opening credits of Zombieland) and ‘Nothing Else Matters’ (covered twice on Australian Idol – don’t judge me). Thankfully, the Trip subplot broke up this monotony.

The stage show is intricately planned and executed. It features the live assembly of a Lady Justice sculpture, which then topples and scatters across the stage, harming no band members or spectators. Miguel Pimentel should learn a thing or two from that. Also, there’s a simulated stage collapse with falling steel objects and jumbo coffins dangling from the ceiling. The floor of the stage is a screen itself, where via overhead shots, we see clips of WWI soldiers, prison torture and an electric chair execution – all which complement the band’s various lyrics about political puppetry, doom, death and all those delightful things. 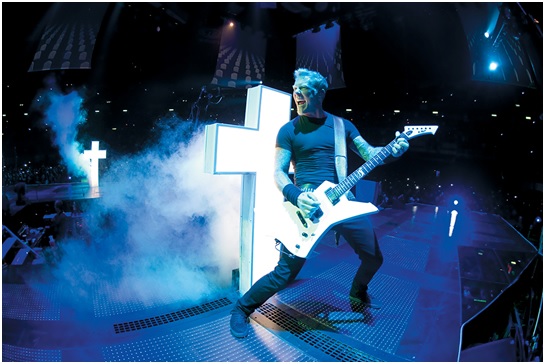 Perhaps Through The Never would have benefitted with some sound bites from band and crew members, providing insight into personalities, away from the instruments and fireworks. In fact, the only time lead singer James Hetfield speaks is after ‘Enter Sandman’, approximately halfway into the film, when paramedics rush to the stage to tend to a stunt person/pyrotechnics stagehand who has burnt himself. It’s all part of the show of course. “Is everyone OK?” Hetfield asks, before reassuring the crowd that all personnel were unharmed.

It’s encouraging to see that after all these decades, Metallica can still summon crowds and get them to chant, clap and fist-pump in unison. The respectful connection between band and fan-base is enviable. It’s all helped by the fact that Hetfield is a professional when it comes to his craft – singing, shouting and growling, song after song, without missing a beat. And when his mic malfunctions, he simply slams it to the ground and sings into the one nearby. 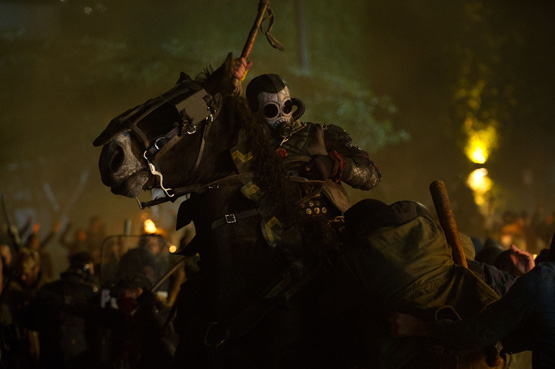 You won’t catch me holding a cigarette lighter at a Metallica gig any time soon, but you will see me giving credit where it’s due. Now it’s time for me to go back to fantasising about Lana Del Rey’s forever-delayed musical film Tropico. It better be as epic and apocalyptic as Metallica’s film.