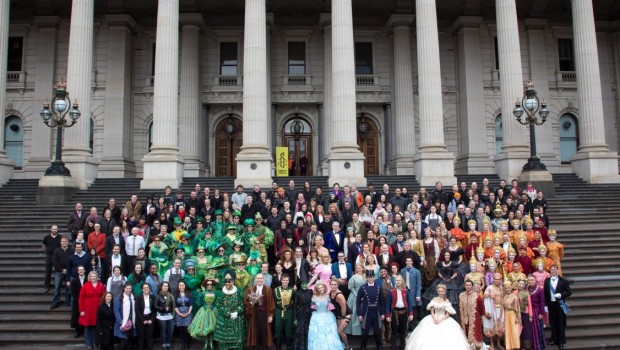 For the first time in five years, Melbourne itself is a “full house”, hosting a major musical theatre production in every heritage theatre in the city.

The East End Theatre District,the collective brand for the city’s heritage theatres, is currently home to Les Misérables, which opened to much fanfare this week at Her Majesty’s Theatre with the season already on sale through to December; Craig McLachlan and his motley crew of misfits in The Rocky Horror Show which has been selling out the Comedy Theatre since April; the spellbinding Wicked packing out the Regent Theatre; and Rodgers and Hammerstein’s exquisite musical The King and I starring Lisa McCune, currently playing at the Princess Theatre.

To commemorate the occasion of the four major musicals playing simultaneously in Melbourne, the cast of each of the productions today assembled, in full costume, on the steps of Parliament House with the Minister for the Arts, Heidi Victoria MP, together with theatre workers from each production for a historic photographic record. 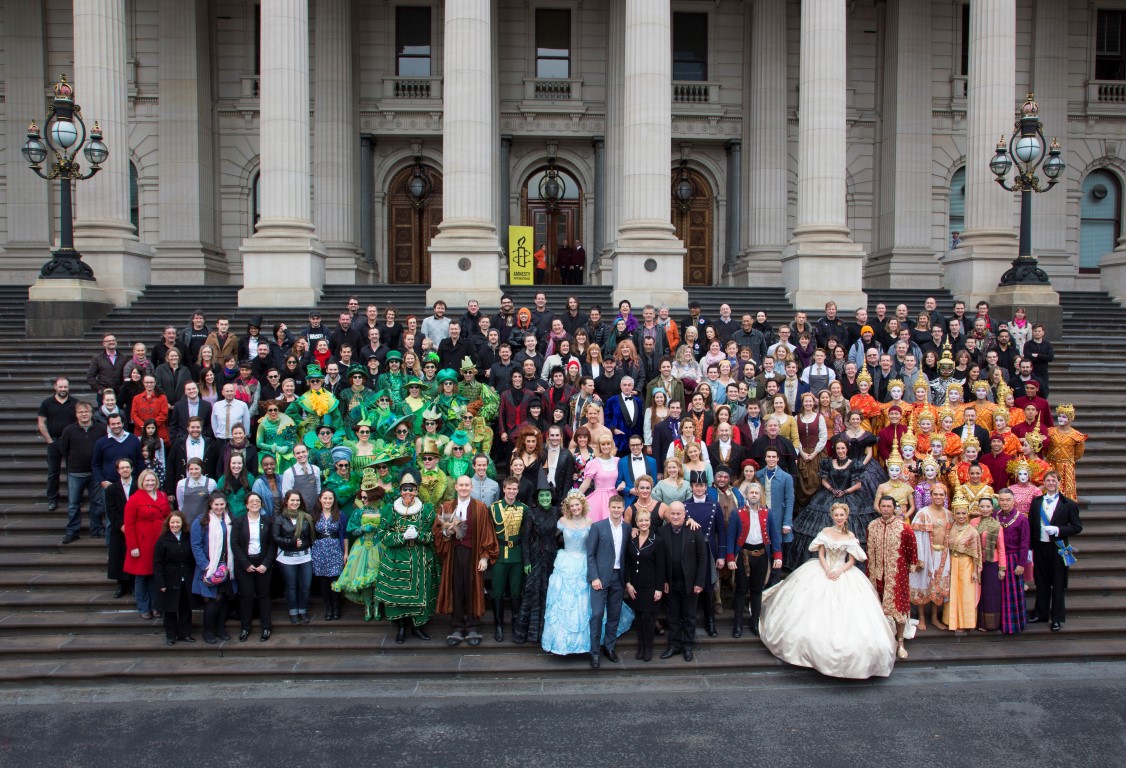 “Melbourne is Australia’s theatre capital and these productions add greatly to that reputation”, Ms Asher said.

The Minister for the Arts, Heidi Victoria said the four musical productions currently showing in Melbourne would not have been possible without the dedication and commitment of producers, cast, musicians and backstage staff.

”Melbourne, as the nation’s arts capital, is at the forefront of a thriving theatre scene which has flow-on effects to the broader Victorian economy,” she said.

Jason Marriner, speaking on behalf of the East End Theatre District, said, “A tourist arriving in Melbourne could quite easily be mistaken for thinking they had arrived on New York’s Broadway or in London’s West End given the amount of theatre currently on offer in the city.

“Over 1.5 million tickets will be sold this year, with more than 22,000 tickets booked to performances this weekend alone. It is a bumper time for theatre in Melbourne – it’s obviously good for everyone working in the theatre to be busy, but the shops, cafes, restaurants and hotels also benefit significantly as well. And of course, most importantly, theatre-goers have the opportunity to experience truly world class theatre and performances. It’s an embarrassment of riches at the moment.”

“Melbourne is a great theatre town – plain and simple,” says leading producer John Frost AM. “Unlike other cities in Australia the location of Melbourne’s theatres in close proximity and within the central city brings a lot of energy and excitement to the experience of going to the theatre. And not only the location, but the theatres themselves are historic and iconic in their own right – Melbourne is very lucky to have held onto these beautiful theatres. They’re a wonderful asset for the city.”

With a combined capacity exceeding 7,000 seats (excluding the Forum), and up to eight performances at each theatre per week, the East End Theatre District has the potential to attract over 50,000 people to the city each week and is a driving force behind the city’s tourism economy.

Jason Marriner added, “Musical theatre is a week-in, week-out major event for Melbourne. Its consistency and longevity when you consider theatre is a year-round proposition, makes it a very valuable attraction for the State, and an essential element of the Melbourne economy.”

Melbourne heritage theatres in fact have a combined economic impact $230 million each year and every year.