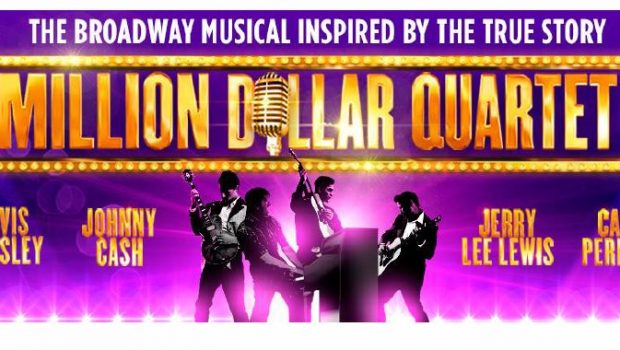 Melbourne from Thursday 8 December at the Comedy Theatre

Tickets on Sale Monday 1 August at 9am through Ticketmaster

THEY CAME TOGETHER TO MAKE MUSIC – THEY ENDED UP MAKING HISTORY.

MILLION DOLLAR QUARTET is the Tony Award-winning Broadway musical inspired by the true story of the famous recording session that brought together icons Elvis Presley, Johnny Cash, Jerry Lee Lewis and Carl Perkins for the first and only time for one incredible night.

On 4 December, 1956, Sam Phillips, regarded as the ‘father of rock ‘n’ roll’ gathered these four young musicians together at Sun Records in Memphis for what would be one of the greatest impromptu jam sessions of all time.  This feel-good show brings to light the extraordinary story of broken promises, secrets, and the once-in-a-lifetime celebration of four young friends that is both poignant and heart-warming.

This thrilling musical brings you inside the recording studio with four major talents who came together, just once, as a red-hot rock ‘n’ roll band.

Written by Tony Award nominees Colin Escott and Floyd Mutrux, MILLION DOLLAR QUARTET opened on Broadway in 2010, following a highly successful seven year run in Chicago, and in 2011 opened in London’s West End.  Also in 2011 the show embarked on a tour of the United States – and is still touring today.

Since 2013, MILLION DOLLAR QUARTET has enjoyed a hugely successful residency at Harrah’s Showroom in Las Vegas – just 10 minutes away from The International Hotel where Elvis himself had a long standing and famous residency!

This electrifying musical has been nominated for and won prestigious awards – on Broadway the show received Tony Award nominations for Best Musical, Best Book of Musical and a Drama Desk Award nomination for Outstanding Musical; and it won the Tony Award for Best Performance by a Featured Actor in a Musical, for Levi Kreis’s portrayal of Jerry Lee Lewis.

MILLION DOLLAR QUARTET is brought to Australia by the producers of Jersey Boys, Cats, Singin’ in the Rain, Phantom of the Opera and Les Misérables: Lunchbox Theatrical Productions, AKA and TEG DAINTY in association with Mark Goucher and Simon Friend.

Don’t miss your chance to discover the true story of this hallowed day in the history of rock ‘n’ roll!

★★★★ “A feel-good musical with a soundtrack to die for” The Independent, UK

★★★★ “Triumphantly delivers a blast of vintage Rock and Roll”

★★★★ “The show that left me all shook up” Quentin Letts, Daily Mail, UK