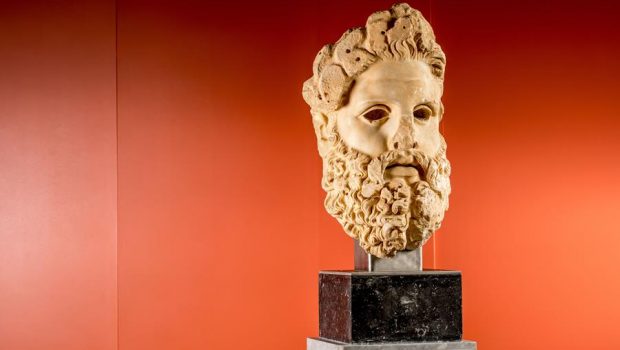 Open Horizons: Ancient Greek Journeys and Connections has arrived at Melbourne Museum. This world-first exhibition offers visitors a once in a lifetime opportunity to see some of the most extraordinary collection items from the prestigious National Archaeological Museum in Athens, many on display for the very first time outside of Greece.

This exhibition is a creative partnership between Melbourne Museum and the National Archaeological Museum, the first museum established in Greece following independence, and home to the richest collection of artefacts from Greek antiquity worldwide.

The exhibition features 44 emblematic objects from NAM’s collection, which encompass four millennia of ancient Greek history. More than artworks, these objects are indicative of the lives of people. They show glimpses of human connection and tell stories of cross-cultural exchange.

Among these objects is a colossal head of Zeus, the Ancient Greek god of the sky and thunder, king of all the gods of Mount Olympus and the chief figure in Greek mythology. Found in Aigeira, Achaia in 1916 and sculpted from Pentelic marble, the head is 77cm high and weighs 400 kilograms.

Another impressive exhibit is a 2,500-year-old Archaic sphinx that has never before left the National Archaeological Museum in Athens, made of Pentelic marble that was found at Spata, Attica in 1879. The sphinx – a hybrid creature with the head of a woman, body of a lion and wings of a bird – was set on top of a tall grave stele as a guardian. Remarkably, remnants of the original polychrome decoration are preserved on the hair and polos (headdress) as well as on the wings.

Minister for Creative Industries, Danny Pearson, says, “Victoria is home to one of the largest Greek communities in the world and this exhibition is an opportunity to celebrate their rich history while showcasing their culture to visitors from across the nation.

“The Andrews Government is proud to bring this exclusive exhibition to Victoria, providing visitors of all ages an opportunity to learn about and connect with Ancient Greek culture, and how it continues to influence our lives today.”

Dr Lina Mendoni, Minister of Hellenic Ministry of Culture and Sports, says, “Since antiquity, the Greeks have always followed the open horizons of the sea, constantly travelling to every corner of the world. Extroversion, broad-mindedness and cosmopolitanism, as well as the ability to embrace and utilize foreign influences in a creative and original way, have been integral elements of Hellenic culture. A culture the Greeks carry with them no matter how far from home they find themselves. This exhibition is an expression of homage and tribute.”

Lynley Crosswell, CEO and Director of Museums Victoria says, “This is a rare opportunity for our visitors to experience these exquisite objects from the most significant collection of Greek antiquity in the world. Melbourne Museum is proud to collaborate with the National Archaeological Museum to deliver this wonderfully contemporary exhibition, that draws on the creative skills and industries that Melbourne is so well known for.”

“The imaginative thread that runs through the exhibition underlines the life-giving influence of diverse populations and civilizations on ancient Greek identity.

“Today Australia is home to one of the largest Greek communities in the world. The state of Victoria is the heartland of the Greek-Australian community. It is a great honour that Melbourne Museum is hosting antiquities from our Museum, some of which are “travelling” outside Greece for the first time, ” added Dr Anna Vasiliki Karapanagiotou.

Open Horizons runs from 23 April–14 August. For more information on the program, and tickets (included with general entry to Melbourne Museum), visit museumsvictoria.com.au/open-horizons