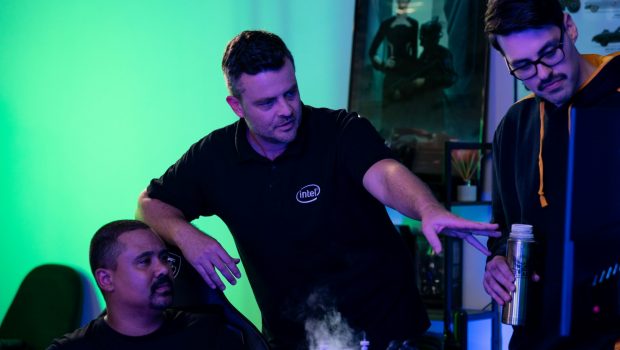 We should probably be a bit more thankful for overclockers. Major tech companies realised that overclockers’ quests for ultimate performance amounted to cost-free, competitive, torture testing of their products. This helpfully identified which components failed, which software settings were bugged and provided a free roadmap to improved computer performance and reliability… for all of us.

What started out as a method of modifying cheap graphics cards to make gaming faster, has evolved into an industry with international tournaments and the ability to turn professional.

Dino Strkljevic has been on this journey since the beginning. A founding member of the legendary Team Australia overclocking team, he’s been a global community leader since the early days and went on to become an international overclocking champion. Back then he was known as Dinos22, but now he’s in-house at Intel. Has his enthusiasm for tweaking and modding technology diminished? Not one bit. 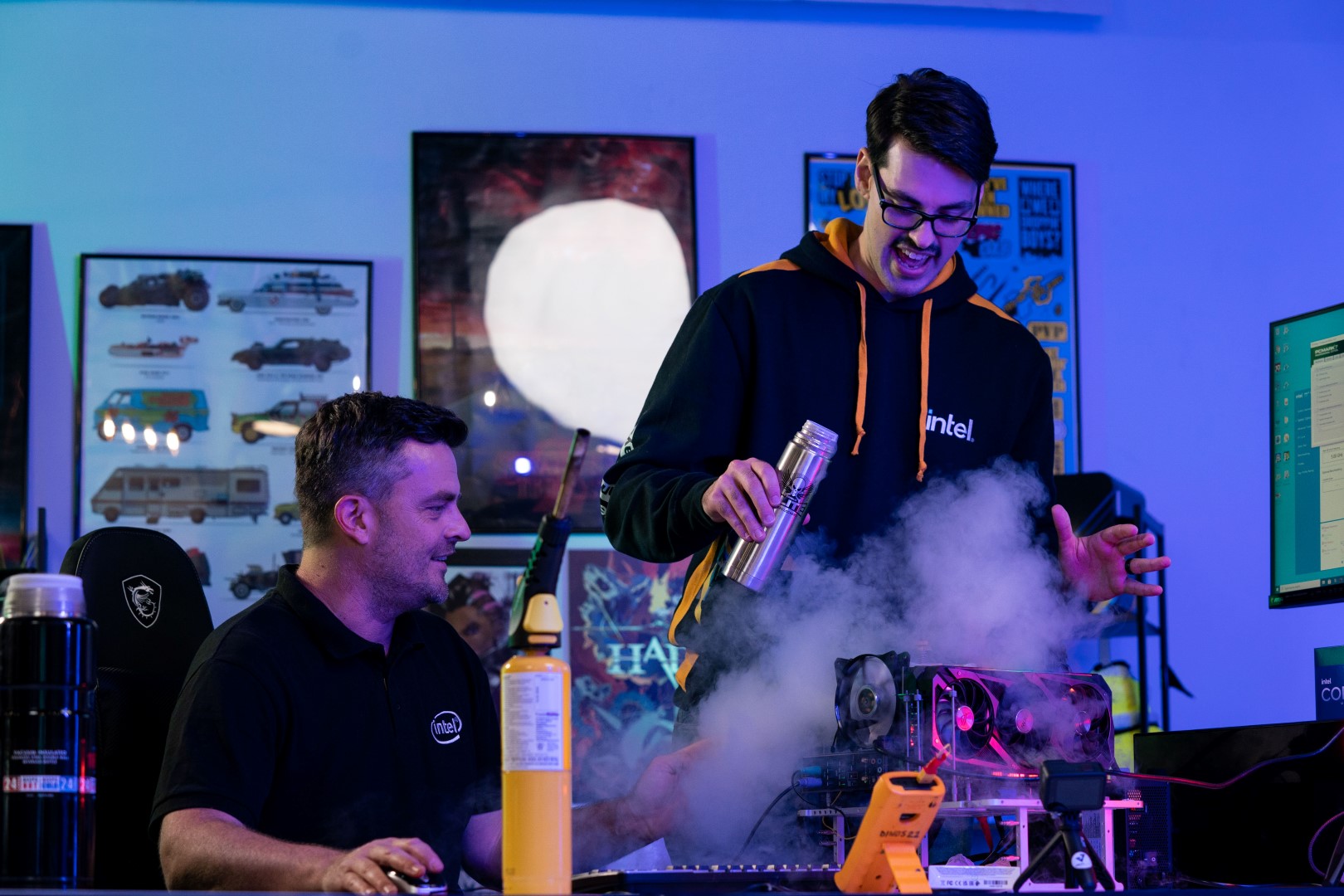 I started to join forums in the early 2000s as they were the Facebook, WhatsApp and Discord of the time. Overclockers Australia [OCAU] was one that was particularly active, and I started going into their trading section and buying components.

There, I’d see other guys exchanging messages about improving the performance of what they’d bought, and it made me realise, I needed better components. The more I read, the more I kept buying. I’d buy more and more of the same CPU until I found the one: the golden sample that I could push the furthest. I’m very competitive and doing this got me hooked.

I also like to share. So, I started writing forum posts, talking about the records we got and how to tweak or tune settings for better performance. That got noticed by Corsair and the company started showering me with products. I was like, “Okay, this is cool!” Then I started getting invited to Nvidia Editor’s Day where they’d fly me to Santa Clara and do all kinds of stuff.

At the time, it was just a hobby, but that early recognition started fuelling my passion for overclocking, gaming, tech modding and sharing it all with the community.

Were you much of a gamer as a kid?

I started gaming on a Spectrum, then an Atari and then my mum, who was teaching early tech stuff in the 80s, got a Commodore 64. So, I’ve lived through all the periods of all those wonderful pieces of technology.

Then, of course, the 386, 486 and Pentium processors started a revolution and things really got going with Matrox and VooDoo graphics cards – Nvidia had only just started back then. It was a big progression from 80s gaming consoles to these modern pieces of 90s tech.

What was the first thing you overclocked?

It would have been Intel’s 486 motherboards. They used to have a switch on the front panel where you could go from 33 to 66 MHertz(!) I went deeper with the Pentium 4 vs Athlon rivalry, but it was the epic Conroe and Core 2 Duo era that revolutionised everything. That was the start of my full, extreme, overclocking madness. 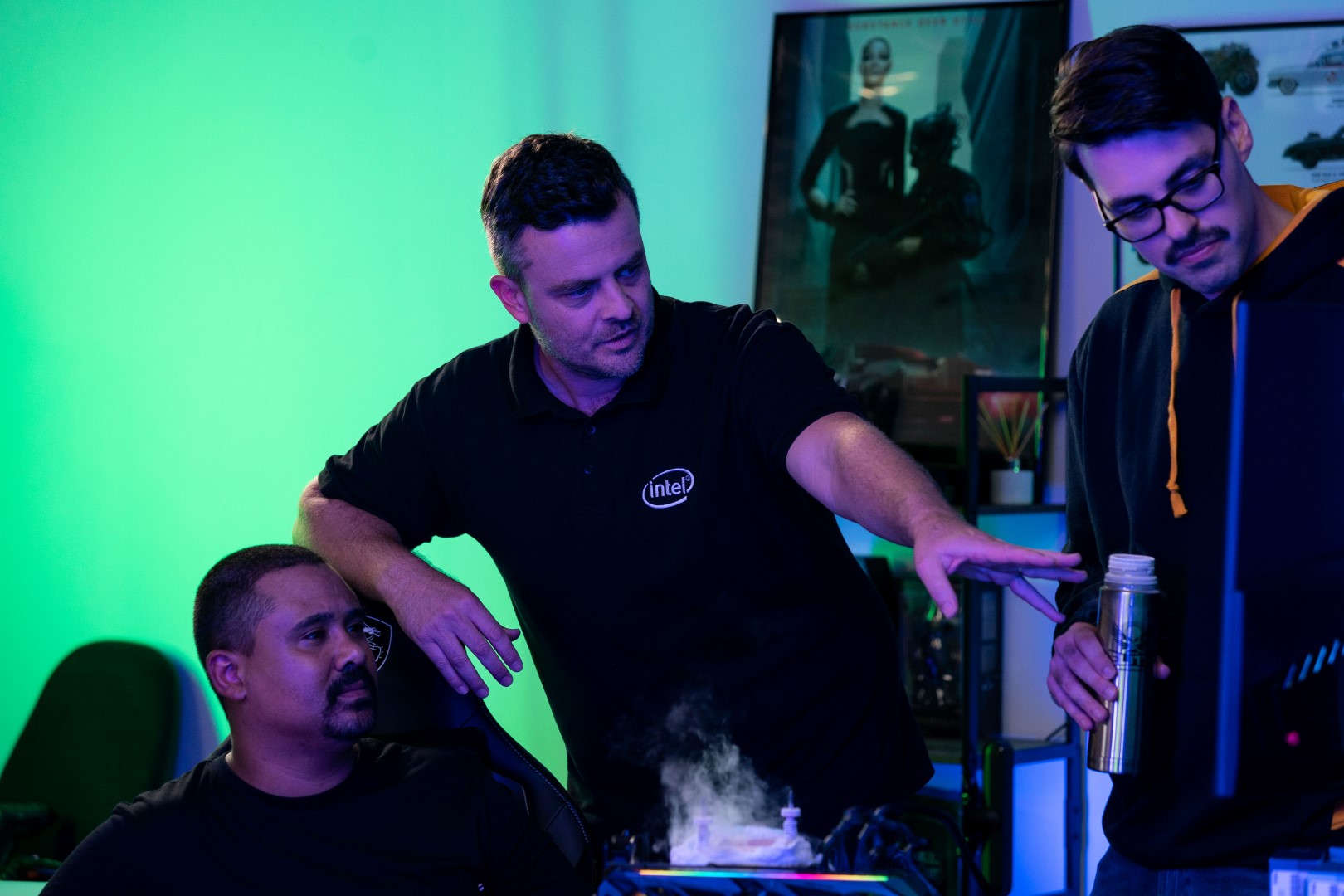 How did your early attempts go?

Good and bad. It was fun because I could see my progression in understanding the hardware and the variables that I could work on. One of those variables was cooling. In the early days, we relied upon stock air coolers before upgrading to big chunky ones with large fans. Then water cooling appeared, and we made custom, water-cooled systems. That was largely inspired by a world-famous guy in Australia called, Cathar, whose custom water blocks were so good, the designs got bought by a company called Swiftech.

But, as cooling techniques continued to evolve, I realised I needed to go sub-zero. So, I bought a single-stage cooler which is essentially a fridge that runs the CPU at -40 degrees Celsius. After that, I discovered dry ice and liquid nitrogen.

That progression of cooling techniques ran alongside my increased understanding of the technology.

Is it the challenge itself that’s so attractive about overclocking or are you chasing a particular outcome?

That’s a really good question. Initially, the desired outcome was to buy something less-expensive and make it operate like something more-expensive – all to make my gaming faster and save money.

But, realising that you could achieve major leaps in performance from cooling and modifying the technology behind the product, still rings true for me, today.

Even with 13th Gen processors, right now. They’re absolutely amazing at overclocking. In my lab I’ve got a retail Core i9-13900K, that ordinarily boosts to 5.8GHz, running 3D applications consistently at 6.4GHz, with just water cooling. On liquid nitrogen we are benchmarking 3D as high as 8.2GHz now! The increase in framerate is tremendous! A word of warning, I did test a number of CPUs before I found the golden one, so don’t expect this type of overclocking in your testing.

What are some of the most fun and interesting things you’ve done with overclocking?

I always like challenges and, on my bucket list, was trying cooling using liquid helium. We normally use liquid nitrogen (-196 Celsius) because it’s easily accessible, environmentally friendly and inexpensive.

But Asus had a lab in Taiwan that broke records with liquid helium which reaches -296 Celsius. I wanted to try that and got an opportunity in a Gigabyte lab where I was working. Being able to push the processor to a new temperature zone, get new frequency records and break world records with it – that was one of the most tremendous things on the overclocking side.

The other thing that has always been present in my heart, is the community. At every stage of my overclocking career, I’ve always tried to give back and so I’ve been building communities, globally. Seeing fresh, new generations constantly coming in, to me, is a major achievement. I really love that. 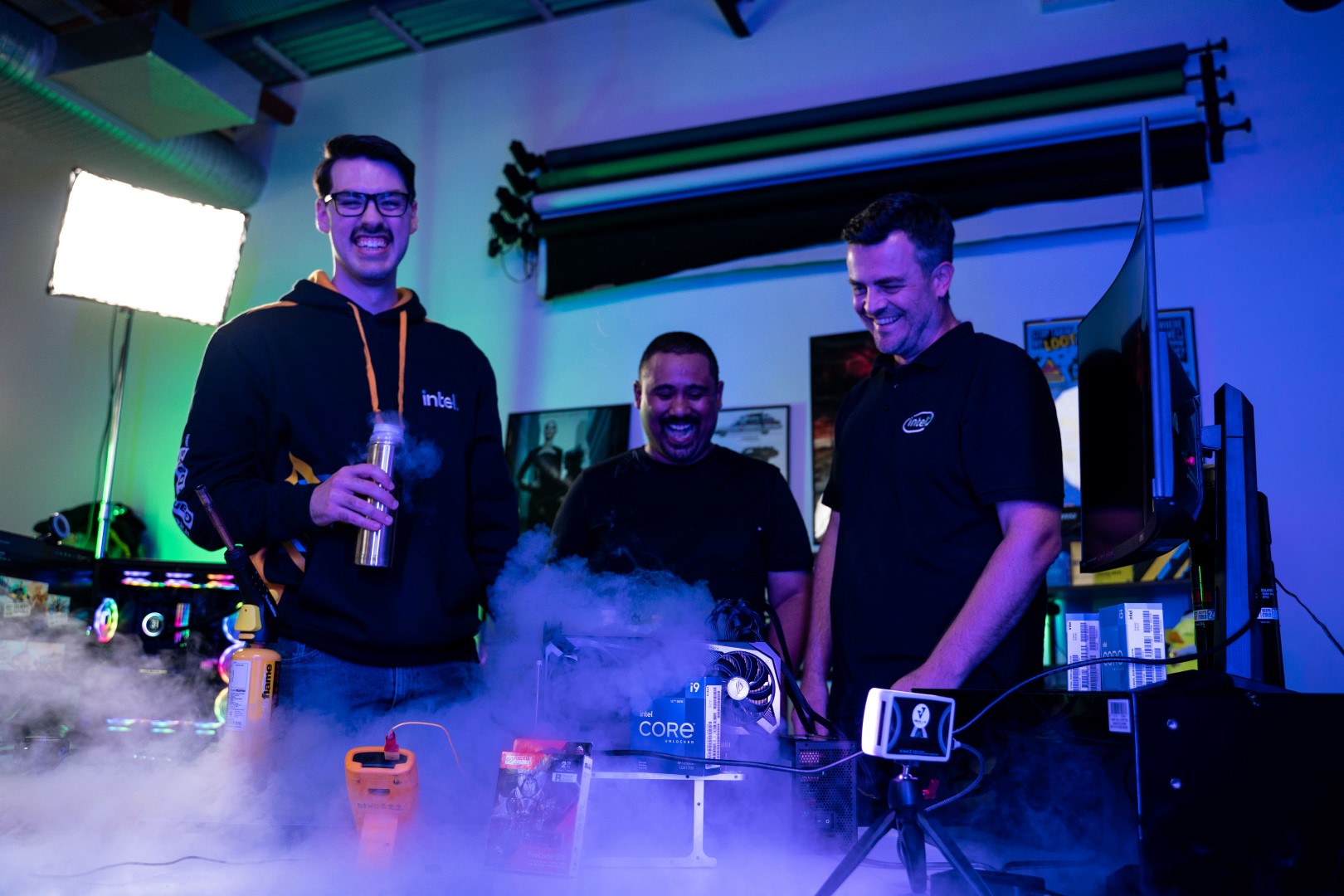 What’s involved in overclocking these days? Is the image of liquid nitrogen being poured over CPUs still accurate?

I don’t remember the last time I took out my soldering iron. I used to have to figure out the limits of capacitors, MOSFETs [transistors] and variable resistors and that used to kill a lot of hardware.

I remember around 2009, in one product development cycle for Gigabyte, we were intentionally pushing the motherboards so hard that they just kept failing. We identified that the failure point was a particular MOSFET. Based on that feedback, they redesigned the product and subsequently their entire next-generation product range. From 2010 onwards they’ve been bulletproof.

Now, we’ve got motherboards that are absolutely amazing to overclock. They’ve got artificial intelligence built into them and lots of cool trickery. They don’t always need extreme cooling.

Intel also now builds overclocking tools like XTU which is an app that enables one-click overclocking. The cooling itself has really matured, too. You can now buy what’s called an AIO which is a plug-and-play, all-in-one water cooler that also helps make overclocking an easy experience. Overclocking is very user-friendly these days.

What about the powerful chips coming out of Intel at the moment? How do they fit into modern overclocking?

When I first ran a 13th Gen benchmark in my test lab, I went, “Whoa! Is this real? This can’t be real. This doesn’t seem right!” I’ve only seen this type of overclocking advancement twice: once was with Conroe around 2006 and 13th Gen is basically like that.

I was under NDA (non-disclosure agreement) so I couldn’t share any information with my friends. I was obviously excited but couldn’t tell them anything until the product launched two months later! So, when they started buying their own i9-13900Ks, they’re like, “Holy smokes! Is this real? This is crazy!” I said, “That’s what I was thinking too, but I couldn’t tell you… it’s insane!”

Anyway, I’m telling you, 13th Gen is tremendous. If anyone has ever thought about potentially doing overclocking, now they absolutely should. YouTube and many websites do a lot of cool guides which show you how along with what cooling techniques to employ.

This performance translates into real-world applications, like gaming, too. I play a lot of CS:GO and smooth frame delivery is essential: if you walk into a Mirage B Site execution with smoke and fire grenades [translation: the terrorist team is planting a bomb at the second site on the complex ‘Mirage’ map], that’s when a lot of resources are drawn on the CPU and graphics card. The drop in framerate can be massive and make the difference between, ‘Kill or be killed.’ Major tournaments get decided by less. 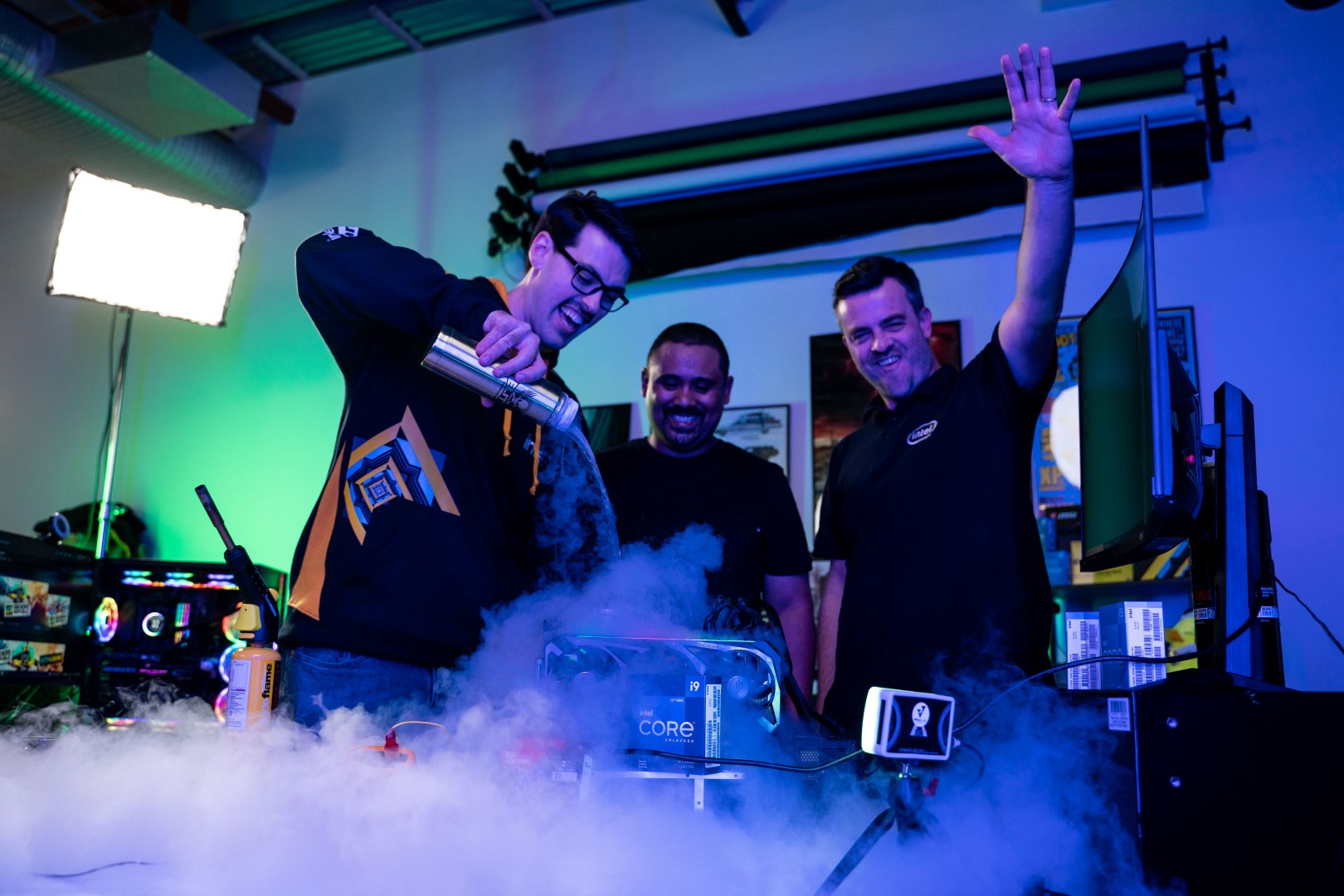 Beyond joining the online communities and forums, what other advice would you give newcomers?

I always had a group of friends to share my excitement with and I think that’s really important. You can find them on hwbot.org, Overclockers Australia, Facebook and lots of places. Also, Team Australia’s overclocking team is still alive, and we do a lot of stuff. In fact, we’ve just had a gathering at the start of December. We had a lot of fun with Intel’s 13th gen. So much so that we broke 35 overclocking records, including 10 world records! How awesome is that right?

How competitive does it get between you and your mates in the community?

It’s ridiculous. We talk smack obviously, it’s a typical Australian group. We always pay each other out. It’s normal and I love that. I don’t feel like I’m special, it doesn’t matter how many records I’ve broken or what I’ve done, it’s all about us finding common ground… and giving stick when you one-up someone.