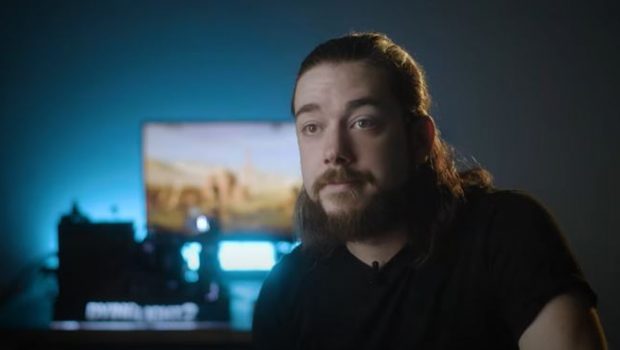 Ever looked at a car wheel and thought “I reckon I could fit a PC in there.”

Ethan from TAGMods did.

In the second profile of this series looking to some of the biggest modders in Australia, we speak to TAGMods, an industry leader in PC modding, fabricating custom pieces for brands globally. In the piece, Intel sits down with its CEO and lead modder, Ethan Cooper, who shares his amazing story of how he went from making custom cases for his friends at uni, to working with some of the biggest brands in the world on massive projects.

Tell us a little bit about yourself.

I’m Ethan from TAGMods and I’ve been doing this for quite a while now! I started TAGMods in 2015 and in the last seven years I’ve been building progressively crazier and bigger things.

I’m a programmer by trade. So I did a full game design and development course which is pretty different to what I’m doing now! I was definitely maths and science kid at school, not an arts and crafts kid. When it comes to modding, I just discovered I was creative during the process. I saw potential in it and was doing builds for friends for the first couple of years that I was making modded PCs.

What is your background with PCs, PC gaming and PC building like?

It literally started off in my university dorm room which was about the size of a shoe box. At the time, I had a quite large Corsair case because it’s just something I picked up cheap. And I had to sit it on top of my desk – It was massive and took up heaps of room. I was looking at it one day and thought “we can make this look cooler” and that’s where it all started.

I did a Batman themed PC as my first ever built – it was for a mate who is a massive DC fan. PCCaseGear and Corsair heard about it and posted on socials. That was pretty crazy because I was just doing it for fun. I didn’t even know case lighting was a thing at that point in time. That led to a couple of other friends asking for builds too. So, we did a creepy Pikachu themed PC and a TARDIS themed PC. That was my first few builds, and everything has grown from there.

Tell us about TAGMods  – When did you start your channel, what was the process like, how has it grown, what have been some highlights?

Everything kicked off with a Fallout lunchbox build – which is my first build that went viral. I got like a boatload of messages that were written by people all over the world. That’s when I realised that this might actually be a career option.

For one of the early PAX Aus events, I dug into my own pocket and bought a booth because I didn’t really know anyone in the industry. All the vendors go to PAX so it was a great way to show off what I do and kind of grab everyone’s attention. We did a whole bunch of builds. And all of this was being created out of my garage.

We’ve come a really long way, and the feedback from people and brands continues to be super positive. It’s awesome.

Is there such a thing as a typical mod? How does the modding process usually progress?

The process is generally pretty much always the same. The first thing I like to establish is a ballpark budget because it kind of puts a rein on my ideas. I’m always going to go big, rather than small!

I prefer to jump in calls and things like that, rather than email back and forth and do a whole bunch of designs. Then we pull together some concept sketches or whip up some Photoshop – that’s best as I know have an artist on staff for high profile designs. Because a lot of companies have sensitive IP that requires specific colours in a design, we need to make sure all that is as accurate as possible.

Once we’ve established how it will look, we can then start working on the build itself, whatever that may be. That’s when things get really wild as everything is always different in unique and interesting ways.

Has the modding process gotten easier over time?

Now I’m in a full 20 by 30 metre double storey facility, things are much easier! We’ve got a full team working on builds now, which breaks my brain if I’m honest! I’ve gone from building things in my garage to working on licenced IP from Marvel, Disney Hasbro, and Mattel. Just thinking about some of the things I’ve built over the last like two and a half years massively excites my inner child and baffles me at the same time.

Having a team help with the build certainly makes things run smoother. But at the same time, it’s allowed us to go bigger and bigger with our designs and builds. So even though it’s easier, it’s also harder as our vision for what we can do has grown accordingly. It’s a good problem to have.

How has modding changed since you started doing it professionally?

Everything has led to us building bigger and crazier things. Like last year alone, we built a scale replica of the old school Boneshaker hot-rod for Hot Wheels. I built a StuG-III assault gun PC for World of Tanks. And then for Intel Gamer Days 2021, we built a PC that spins. This is all long way from putting in some RGB lighting and slapping some paint down on a case to theme it.

What are your top 3 favourite mods? Why are these your favourites?

My favourite build changes every six months or so because we end up with some new wacky idea on the workbench. I love trying new things, so most of the time my favourite job is the one that has something that I didn’t know how to do – I love like figuring out that problem solving to get to the finish point.

The Sydney Opera House from 2021 that we built for Corsair was a fave though. It gave me an incredible appreciation for the design of the Opera House and looked brilliant when we were finished with it.

Modding seems to be equal parts image and performance. What are you looking for in a CPU when building a case mod to reach those performance highs?

In general, we take this on a case-by-case basis – pun intended! So, for going for a small form factor build we go for compactness and cooling over most things. Regarding CPUs we just go big for most of those projects with a flagship CPU from the most current range – I couldn’t tell you the last time I used anything lower than an i7 for a project!

This makes sense because we’re trying to grab people’s attention. When we work on a build we reach out to Intel, mention the project and ask for the biggest and baddest CPU we can, depending on the client’s budget.