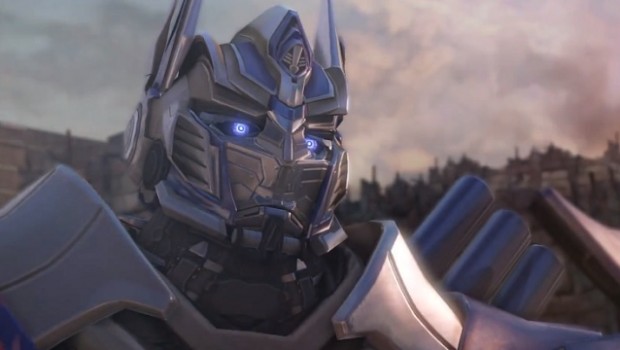 Sydney, Australia – February 18, 2014 –Activision Publishing, Inc., a wholly owned subsidiary of Activision Blizzard, Inc. (NASDAQ: ATVI), and Hasbro, Inc. (NASDAQ: HAS) today announced TRANSFORMERS™: RISE OF THE DARK SPARK™, a video game complement to Paramount Pictures’ upcoming film, TRANSFORMERS: AGE OF EXTINCTION, set to release this June. This third-person action adventure video game goes beyond the movie by uniting the universe of director Michael Bay’s TRANSFORMERS movies with the ever-popular Cybertron universe. Players will choose from over 40 playable characters from the two different universes as they battle to secure the Dark Spark.

“TRANSFORMERS: RISE OF THE DARK SPARK is an arc between the Cybertron and Earth based worlds of this popular franchise,” remarked Mark Blecher, SVP Digital Gaming & Corporate Development at Hasbro, Inc. “This year marks 30 incredible years of TRANSFORMERS.  This game tells another chapter in the TRANSFORMERS story that all fans will love.”

Serving as a follow-up to both the upcoming TRANSFORMERS live-action film and Activision’s TRANSFORMERS: WAR FOR CYBERTRON and TRANSFORMERS: FALL OF CYBERTRON titles, TRANSFORMERS: RISE OF THE DARK SPARK jumps worlds and factions as it weaves the tale of the hunt for an ancient relic as powerful as the Matrix of Leadership – the Dark Spark. Players will be able to switch between the heroes of the noble AUTOBOTS and the nefarious DECEPTICONS throughout the single-player campaign. Similar to High Moon Studios’ CYBERTRON entries in the highly regarded series, gameplay features nimble, fast-paced running-and-gunning combat paired with traversal and vehicle action across open battlefields for large-scale, dynamic conflicts.

Players will also see the return of the fan-favourite multiplayer mode, Escalation, which delivers wave-based, survival-style gameplay for up to four players online co-operatively. It features new, upgradeable defense systems, recognisable adversaries from the lore, and an expanded roster of playable characters from past and present. Additionally, an exciting new leveling system transforms single-player and multiplayer into one unified, persistent character development path. Experience earned in any part of the game unlocks potent awards and tactical load-out choices – including new characters, stronger weapons, special abilities and consumable bonuses – for use throughout the entire game.