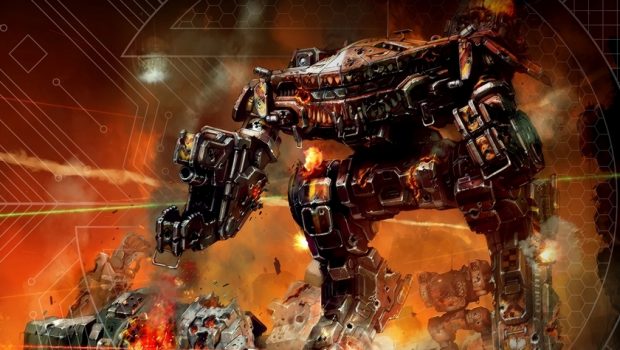 Developed by Pirahna games, Mechwarrior 5 Mercenaries lets you jump into the cockpit of a battlemech. In case you aren’t familiar with the Battletech series upon which the game is based, a battlemech is a giant stompy robot loaded with missiles, autocannons, lasers, and all manner of explodey death. The Mechwarrior line of games prides itself on being more of a simulation and less your typical sci-fi vehicle shooter. 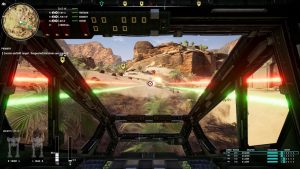 The year is 3015 and you are Commander Mason. Out on training exercises with your father, your ‘mechs are ambushed by hostile forces and your father sacrifices himself so that you can escape. Major Ryana Campbell, your soon to be second in command, ushers you to safety and helps you flee the system. Once the most imminent danger has passed, she hands you the reins of the mercenary company your father founded and tells you it’s time to get started.

Resources are scarce and you have only a couple beat up old ‘mechs at your disposal. Right from the start, you are tasked with rebuilding your company’s forces, making a name for yourself in the galaxy, and tracking down leads on the faction that killed your father.

Those familiar with the Mechwarrior series will find themselves right at home in this game. The core mechanics are all still here. Firing weapons, using jump jets, taking damage and certain planetary conditions all generate and contribute to heat. Heat is bad, and overheating your ‘mech will cause it to temporarily shut down. In the middle of combat, this makes you an easy and defenseless target and can quickly bring a bitter end to the mission if it happens at exactly the wrong time. 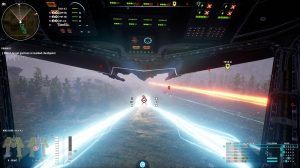 Battlemechs come in one of four categories: light, medium, heavy or assault. Each category contains ‘mechs of a certain tonnage, and at the start of each mission you are given a tonnage cap for what you are allowed to deploy. You can field a lance of up to four ‘mechs and it’s up to you whether you want to field a couple heavier ‘mechs and have fewer numbers, or larger numbers and lighter ‘mechs. Each has its own advantages in terms of firepower or mobility.

Much of the management of your company happens at the operations table. From here you can access the starmap, your ‘mech hangar, the market and the barracks—where you will recruit AI pilots to help you along the way. Each jump you make to different systems costs money and money is something you don’t have much of to spare at the start. But you’re free to explore at your leisure, taking contracts from the various factions. As you run missions, you inevitably build reputation with the ones you help and draw ire from the opposition. 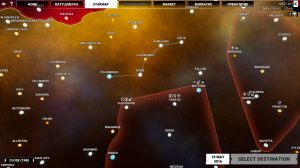 This becomes important at the start of the mission as it determines how many negotiation points you have to spend. Negotiation points allow you to do things like increase the payment of your contract, give you better pick at battlefield salvage or have your employer pay for damages incurred while out in the field. These points are also affected by your overall reputation, which continues to grow as you make a name for yourself.

You will incur a LOT of damages while out in the field. Allied AI is terrible. Your teammates will inevitably hit you with machine guns, flamers, lasers and PPC blasts, and you’ll constantly be cursing how quickly they lose valuable ‘mechs and components as they stumble with you through the missions. During defense missions your AI allies are just as likely to step on or nuke the objective you’re supposed to be protecting as they are to damage the enemy. One word of advice: if you want your defense objective to be safe, try to avoid equipping your allies with flamethrowers and PPCs. 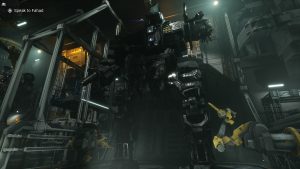 That said, combat is really fun. You can play in first or third person, but first person is definitely the way to go. You feel the heavy weight of your ‘mech as you surge forward knocking over trees and crashing through buildings. It’s satisfying to tag an enemy ‘mech with a PPC blast or a full bank of lasers and watch them topple over and explode. If Mechwarrior 5 does one thing right, this is definitely it.

At first, Mechwarrior 5: Mercenaries feels like a very pretty game. It isn’t until you’ve landed on the tenth or so similar planet that you really begin to notice the repetition. Though everything looks just fine, once you’ve seen one ice planet you’ve seen them all. The ‘mechs themselves look great, and as they become more and more damaged this is represented by the models themselves. Seeing the charred blackened mess of what used to be your ‘mech sitting in the hangar after a mission is a sobering experience.

The cockpit is beautifully rendered and you can free look around to peek to either side without actually twisting your ‘mech torso, which is nice. Weapon and particle effects are great, and it’s cool to see the smoldering wreckage of the tank you just blasted to pieces.

The soundtrack lends a sense of nostalgia. If you’re familiar with previous Mechwarrior titles then it’ll seem new but familiar. The tracks provide a fantastic accompaniment to blowing away enemy ‘mechs, but also sort of fades into the backdrop after awhile. The voice acting is passable but not remarkable. Commander Mason isn’t exactly a silent protagonist, but he also doesn’t have much to say. Much of the story is told via text based mission briefings anyway. 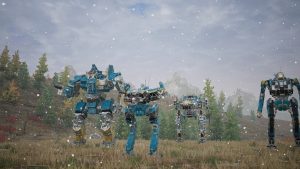 Multiplayer in Mechwarrior 5: Mercenaries is a co-op experience. At the time of this writing, here isn’t a way to engage in PvP. You have three options for co-op: host a campaign, join a campaign, or play instant action.

Instant action isn’t exactly what it sounds like. You can create or randomly generate a single mission and play through it with whatever ‘mech you like up to the mission’s allowed tonnage. However, without any sort of matchmaking available you’re limited to players from your friends list. This works perfectly fine, and it’s fun to stomp around with friends for a bit, blowing away enemy ‘mechs in your overpowered engines of doom.

You also have the option to play through the campaign with up to four friends. And this is where Mechwarrior 5’s multiplayer kind of falls apart.

One player hosts the game and then invites other people on their friends list to join them. The players appear inside the host’s ‘mech bay and can wander around and… look at things… to their heart’s content. That’s about the extent of their ability to influence running the ‘mech company or contribute to the campaign aside from participating in missions.

The only person able to read briefings, browse the market, purchase and upgrade, paint ‘mechs, or do basically anything related to running the mercenary company is the host. You can’t even view system intel, available missions or what’s on the market if you’re joining a hosted game. Literally all you can do is sit around, wait for the host to pick a system, decide on a contract, repair ‘mechs and basically everything up to the mission launch screen. 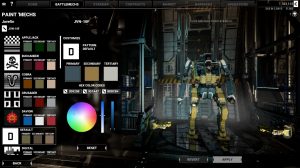 You can’t even hear or participate in the story as a co-op player. In the game I joined, I was standing right next to another player when he triggered the objective “Speak to Ryana”. For the next couple minutes there was abject silence while he listened to the story beats and I heard absolutely none of it.

Players who join the host’s campaign come aboard as passengers, and alternatives to AI pilots. Even during the missions themselves, this flaw is apparent. During one mission where the player hosting the game went down, I was left to complete the mission with two AI pilots. The two AI pilots refused to move away from the fallen corpse of the host player’s ‘mech, and I had no ability to command them to follow me or anything. I had to finish the mission on my own.

At the time of this writing there is also no integrated voice or text chat. If you want to communicate with your friends, you’re required to use third party software. If you’re hearing or speech impaired, without a text option you are out of luck.

At its heart, Mechwarrior 5: Mercenaries is a single player experience. The story is less important than stomping around in a giant ‘mech and that’s okay. It’s fun and engaging, though after awhile can get repetitive. The co-op campaign mode was an exciting prospect and it does offer more than Mechwarrior 4: Mercenaries. It nonetheless feels like it was tacked on last minute—hopefully something Piranha will attempt to rectify in future patches. 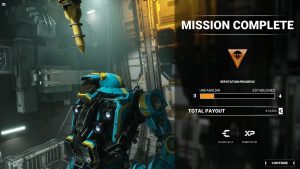