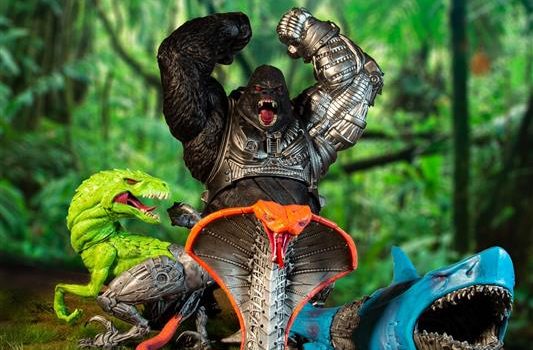 Today, McFarlane Films announced a partnership with independent studio wiip and Warner Bros. Discovery’s Rooster Teeth Studios to develop an adult animated TV series based on the popular McFarlane Toys RAW10 toy line – an action figure series of cybernetically enhanced animals created by McFarlane Toys and recently sold exclusively at Walmart. The team will be taking the project to buyers at the top of next month. 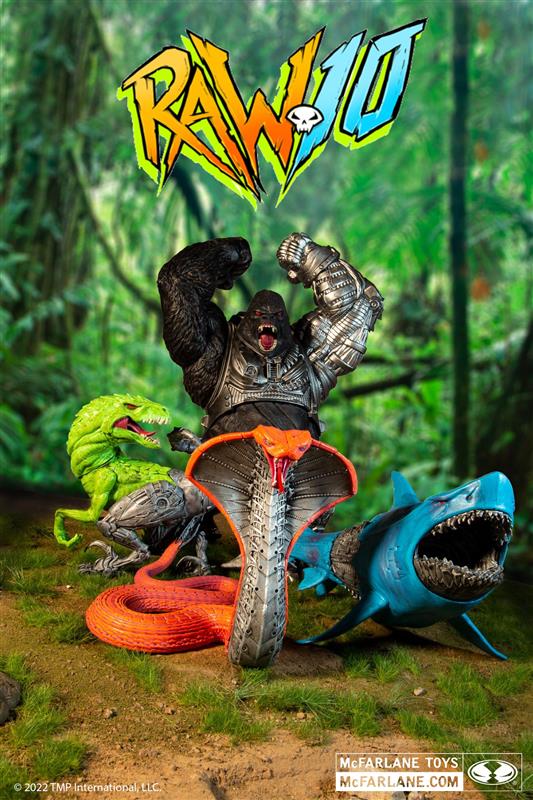 From creator Dan Dominguez – known for Netflix’s SEIS MANOS and HBO Max’s gen:LOCK –  the RAW10 adaptation will be an R-Rated Saturday morning cartoon for adults that satirically explores the tropes of 80’s era animation through the lens of McFarlane’s toyline.

Comic book legend Todd McFarlane, creator of the Spawn universe, won two Emmy Awards for his groundbreaking animated series of the same name, which aired on HBO from 1997 to 1999. RAW10 represents McFarlane’s first foray back into the medium – 23 years later – in collaboration with wiip and Rooster Teeth Studios. His toy company, McFarlane Toys, is a top-5 global leader in its field, redefining the action figure market’s standards and a licensee of world-class brands and leading global franchises. When McFarlane first announced the RAW10 launch in 2020, pre-orders sold out within hours. The line was met with widespread praise and enthusiasm not only from the media, but also from adult collectors and pop-culture enthusiasts who grew up during the modern action figure renaissance of the 80s and 90s.

“Having fun in the older-skewing animation space is always something I am thinking about,” said Todd McFarlane. “With the off-beat mind of writer Dan Dominguez and the experience of Rooster Teeth, we are all hoping the combined total will be a wild and entertaining ride for everyone. Animation lets our minds have an unlimited budget to create everything.”

“When I was a kid, I loved Saturday Morning Cartoons and, as I got older, my love of animation only got stronger thanks to anime,” said Dominguez. “So many of the great R-rated toons out of Japan showed me that genre animation could be made for grownups. That they could be darkly hilarious, thematically rich, cerebral, violent, and seductive. So when I got the chance to come up with the world’s first adult Saturday morning cartoon, and to do it with Todd McFarlane – a personal hero who opened my eyes to how grown up comic books could be… needless to say, this project has been a dream come true. So get ready for deeply unsettling, grown-up style laughs! Thrills! Chills! Gore! Sex! Adult themes! And… emotions! Yes, I do in fact plan on having a 30 foot tall cybernetic gorilla make you cry.”

RAW10 toyline fan favorites will make their debut in the show, including FREN-Z – a robotic blend of a great white shark and prehistoric megalodon, BATTLESNAKE – a super genius reptilian monster, and CY-GOR – part guerilla, part cyborg. Although CY-GOR was originally introduced in the Spawn universe, and his Spawn backstory may come into play, the RAW10 animated series will remain separate from the Spawn franchise.

Independent studio wiip, known for HBO’s Emmy Award-winning series Mare of Easttown and Apple TV+’s Peabody Award-winning Dickinson, has been eager to enter the animated space and has prioritized development in the medium.

“With Todd’s highly anticipated return to TV animation, Dan’s blistering run of genre defying shows, and Rooster Teeth’s flawless track-record, wiip couldn’t be in better company to launch our first animated show,” said Mark Roybal, wiip. “We’re always going to bet on the most original, daring and creative filmmakers – and that’s what we have with Todd, Dan, and Dan. This show is definitely going to wake up the whole house on Saturday morning.”

Rooster Teeth Studios’ production credits include Michael B. Jordan’s gen:LOCK on HBO Max and Transformers: War for Cybertron Trilogy on Netflix. Rooster Teeth also produces the award-winning Halo satire Red vs. Blue, which is the longest-running web series in history, and the global phenomenon RWBY. Rooster Teeth Studios is represented by CAA.

“I had a Spawn movie poster at my Bar Mitzvah, which is a choice that feels officially justified,” said Dan Shorr, Rooster Teeth Studios’ Head of Scripted. “We’ve absolutely loved working with our partners at McFarlane Films and wiip and reuniting with our brilliant gen:LOCK Executive Producer Dan Dominguez to help put together this unique love letter to genre storytelling.”