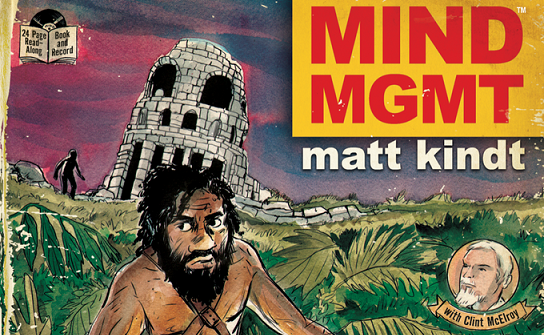 Acclaimed cartoonist Matt Kindt is launching his first ever Kickstarter project to independently finance an experimental and historic project: an all new, stand-alone MIND MGMT comic book by and a read-along 7″ vinyl record. Joining Kindt will be Clint McElroy, a voice actor and the writer of comic books including King of the USA who does all the voice acting for the audio track.

Impulse Gamer was fortunate enough to chat to Matt about this exciting and adventurous new project, where he talks about what fans can expect, his reasons for venturing into this experimental storytelling and much more! 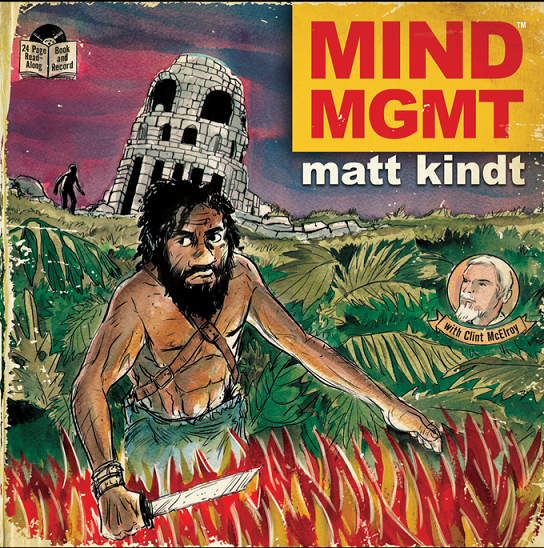 Can you tell us a little about this Kickstarter and what fans can expect?

I can promise you that there hasn’t been anything else like this…ever. I think. Ha! As far as I know at least. I grew up listening to these read-along comic books and records – the audio story would be acted out with sound effects and music and there would be a page “ding” so you knew when to turn the page and you would read this comic along with the audio. It was a completely unique kind of comic book and audio-story experience. So I really wanted to re-create that but then elevate it to a kind of adult art form. Using MIND MGMT as the vehicle was a no-brainer. MIND MGMT is this universe I created in a way to be a lot like Sandman of all things. It’s a universe where I can tell any kind of story and it can take place anywhere on earth and in any time period. It follows a secret organization of spies with highly-trained minds…they almost seem like they have “powers” but the “mind managing” is really grounded as much as possible in science…just turned up slightly. So I wanted to do this comic book and read-along record that would be a kind of super subversive spy story.

Once I started this story though, I realized that just a straight-up read-along record would be…redundant. Those are great for kids – encouraging reading and all that. But this is a more complex story. It’s aimed and an adult audience so I really started playing with the form. Using the audio story as one piece in a larger puzzle. You listen to the story and read along just like when I was a kid…but the images in the comic paint a different story – they subvert the audio…and then you have this crazy third layer of words and captions that are subverting both the audio and the image below it. It’s really working on three levels all at the same time. I’ve never seen anything like it. And that’s really why I felt like it was worth doing. It started as inspiration from nostalgia but then morphed into this crazy kind of hybrid medium that really hasn’t been explored at all. 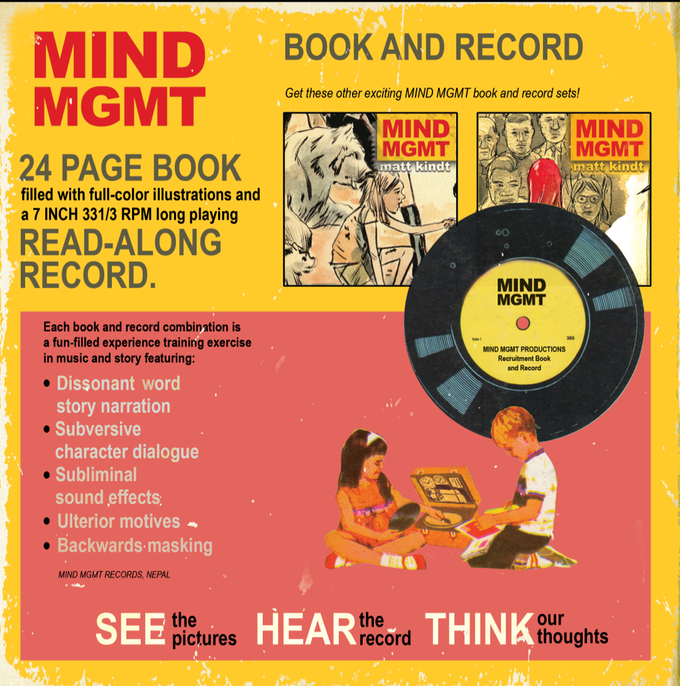 What made you decide that this was the direction you wanted to take with MIND MGMT?

I feel like the original 37 issues (6 hardcover volume series) is its own thing. I didn’t want to re-start the series as a comic book in the traditional sense. And I think that fits the idea of the series – it was as non-traditional as I could make it. But I really wanted to tell more stories in that vein so for the for-seeable future I’m going to do these kind of one-off art-object style stories that work as stand-alone stories but also build on and fill in the mythology of the original MIND MGMT series…and it keeps me engaged. It’s a little bit terrifying to do a crazy new project like this. Comics is kind of figured out. You know how to reach that audience and produce the work…but this? This is something kind of nuts — a comic and record? But it also makes perfect sense and once you read/see/hear the story…you’ll see how it all comes together.

This is an unusual way to release a comic and is quite innovative in it’s experimental approach. Are you hoping that that this might catch on and be a new way for people to read and experiencing comics in the future?

It could be. I could see doing a series of these records if there’s the demand for them. But I think they need to be different than the old records. It can’t just be the comic book acted out. The audio needs to work in the same way that a caption works with a comic book panel and image. The caption should never just simply describe what’s in the panel. Just like the audio shouldn’t just act out what you see on the page. It’s redundant. But if you can get those three elements working in harmony – then you’ve got something! That’s a new art form. 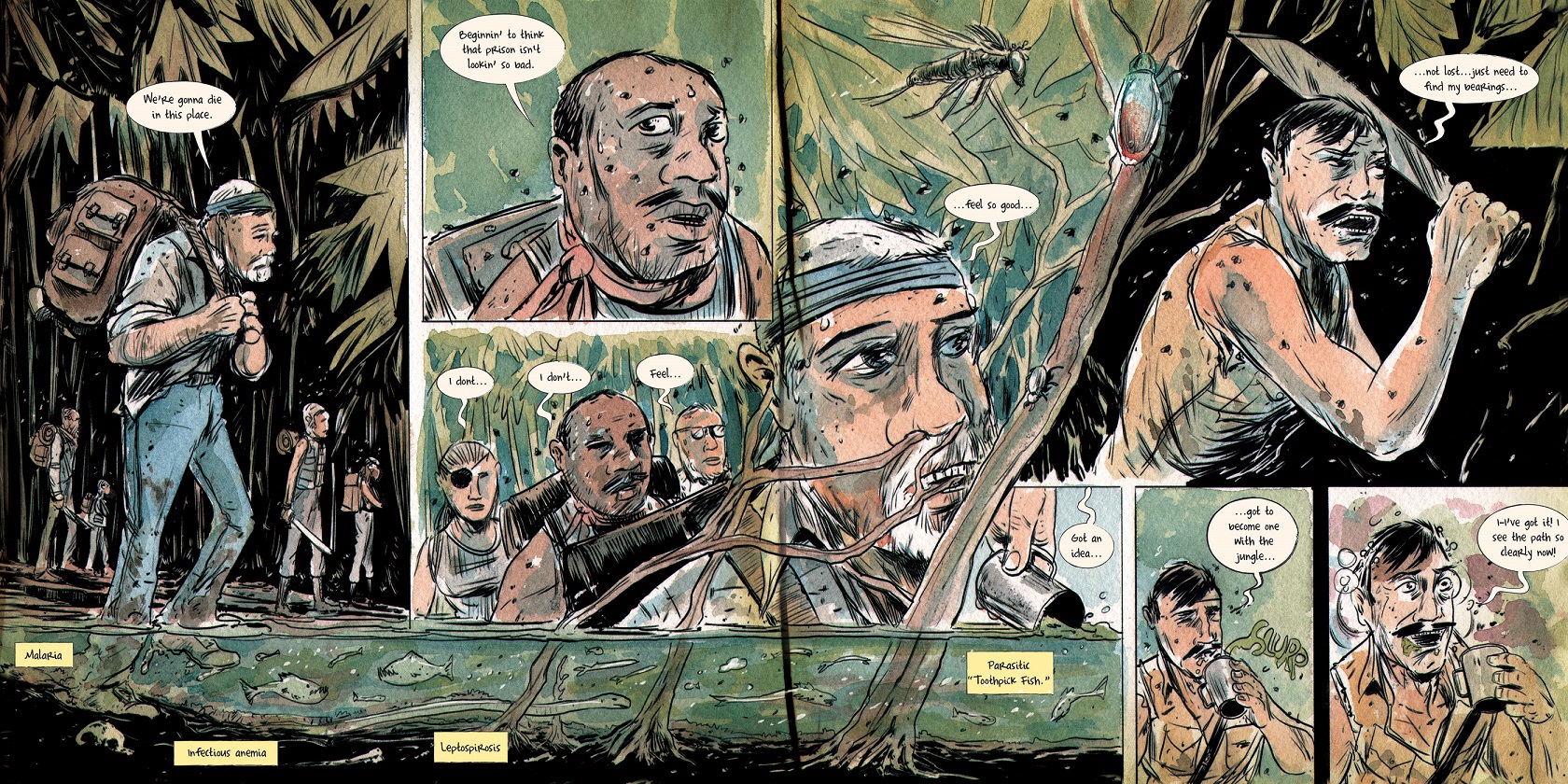 What will be on the record? Will there be a soundscape or soundtrack to go along with the dialogue?

Yeah – I spent a long time editing and layering sound effects and music and some other super-sneaky subliminal things into the audio. And it’s acted and voice by Clint McElroy who’s unbelievably talented. I wrote this script for him and there are three distinct characters at least…and the way he modulated and changed his voice and inflection…it really sells the story.

Is this something that new readers can enjoy and partake, or will they have to already be familiar with MIND MGMT?

This is a stand-alone tale and actually works as a great introduction to the idea of MIND MGMT. It’s pretty subversive so if you’ve read some of the comics you’ll get more out of it – but this is meant to be a stand-alone story and a great place to start if you’ve never read any of the other books.

Finally, can you reveal – without giving away any spoilers – what fans can expect in the new arc?

Absolutely not! I will say…after you’ve listened to it a few times…try playing it backwards.

If funded through Kickstarter, pledges will be delivered to backers this fall.