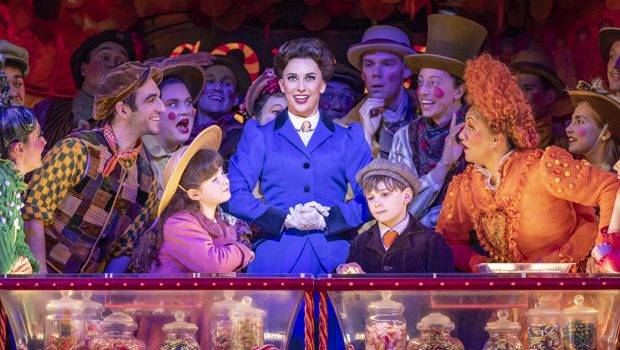 Mary Poppins Company in Full Flight Ahead of Opening Night

Following a triumphant run of preview performances, the Australian company of MARY POPPINS are perfectly poised to fly into opening night at the Sydney Lyric Theatre on Thursday 26 May.

Playing to packed houses since May 15, everyone from couples on date nights to intergenerational families have flocked to this new production from Cameron Mackintosh and Disney, which is even more magical than before.

Stefanie Jones, who leads the all-Australian cast as Mary Poppins, has been overwhelmed by the response of the audiences so far.

“Performing to such generous audiences is always an honour, and we are all loving their reactions to this special show. The emotional heart of the story really connects to the adults in the audience, and hearing children giggling in the comedic moments lifts us all on stage. And I hope that everyone is as enchanted by the stage magic as I am every night!”

NSW Minister for Tourism Stuart Ayres has also shared his excitement about what it means to be bringing the timeless tale of MARY POPPINS to Sydney once again.

“I am delighted the Australian company of Mary Poppins are about to sprinkle some magic in the Sydney Lyric Theatre tomorrow night. I wish the cast and crew every success and strongly encourage Sydneysiders to go and experience the magic of Mary. This world-class production is a further demonstration that the Harbour City is open for business and welcoming visitors to enjoy our vast cultural offerings and hospitality. The NSW Government is committed to investing in premium productions like Mary Poppins to showcase Sydney as the nation’s culture and lifestyle capital and deliver on our goal of making NSW the premier visitor economy of the Asia Pacific.”

Several members of the original creative team for MARY POPPINS have made the trip from the UK to celebrate the opening night in Sydney.

Co-creator and producer Cameron Mackintosh, who wrote the original treatment for MARY POPPINS in the shadow of the Opera House 22 years ago, is thrilled to be back in the Harbour City with his new production.

“Australia is one of my favourite places in the world to work, so it is just wonderful to be back in Sydney. I was incredibly proud of the last production of Mary Poppins here over a decade ago, and I can pay no greater compliment to this cast that I didn’t think of the first production once. They are simply soaring. This cast have made it totally new and the reaction from preview audiences is even better than last time. So I can only echo PL Travers’ words and say they are ‘practically perfect in every way’.”

Also in Sydney for the opening night is George Stiles, writer of the musical’s new music including Practically Perfect. Stiles has been delighted by the Australian company, who are in fine form.

“Hearing Stefanie breathe new life into our songs is a truly beautiful experience – I love watching and hearing her perform with such grace. She truly is practically perfect!”

Seen by tens of millions of people worldwide, the original Tony and Olivier award-winning production was hugely successful in Australia, breaking box office records and winning a record-breaking eight Helpmann Awards. Now, a whole new generation of theatregoers have the chance to experience this magical stage adaptation of the wonderful stories by Australian author PL Travers.