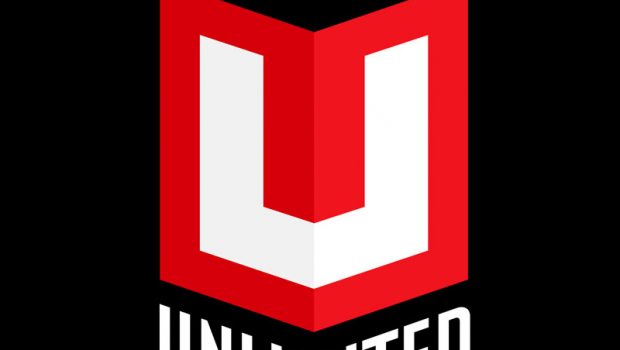 MARVEL UNLIMITED EXPANDS THIS MAY! 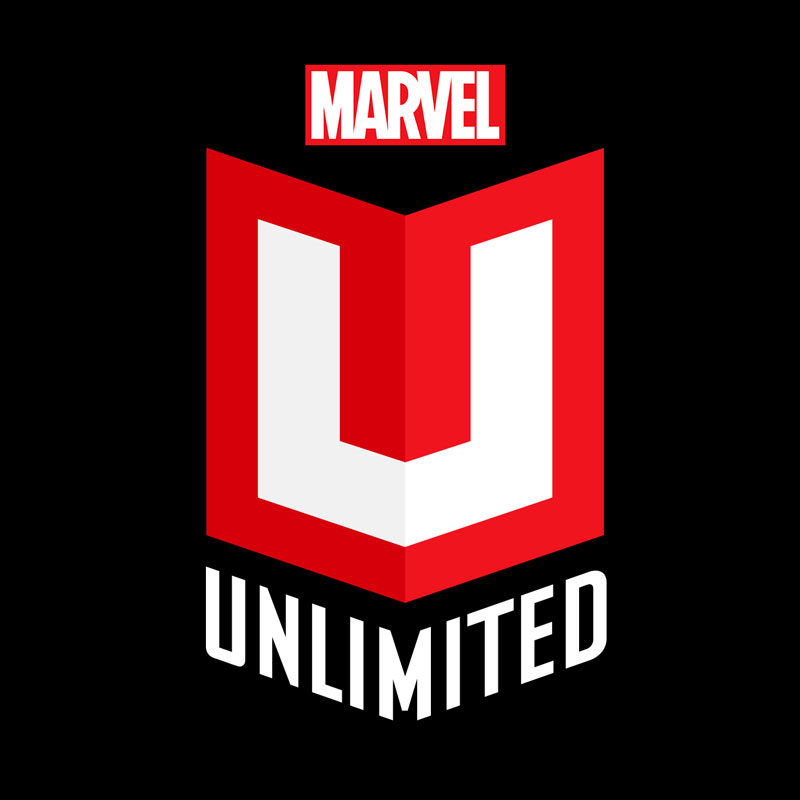 It’s Halloween in the Marvel U! What does that mean for KATE BISHOP, A.K.A. HAWKEYE? Well, I can’t tell you here but I CAN guarantee it involves a haunted house, some witty one-liners, and a bad guy shot full of arrows…

DOCTOR STRANGE AND THE SORCERERS SUPREME #1

An ancient evil threatens to unravel the fabric of reality, and one Sorcerer Supreme may not be enough. Doctor Strange must unite past, present and future Sorcerers Supremes to stem the coming darkness – Merlin, the Ancient One, Wiccan, and more! But Strange should watch his back, not all of these Sorcerers have his best interests in mind… 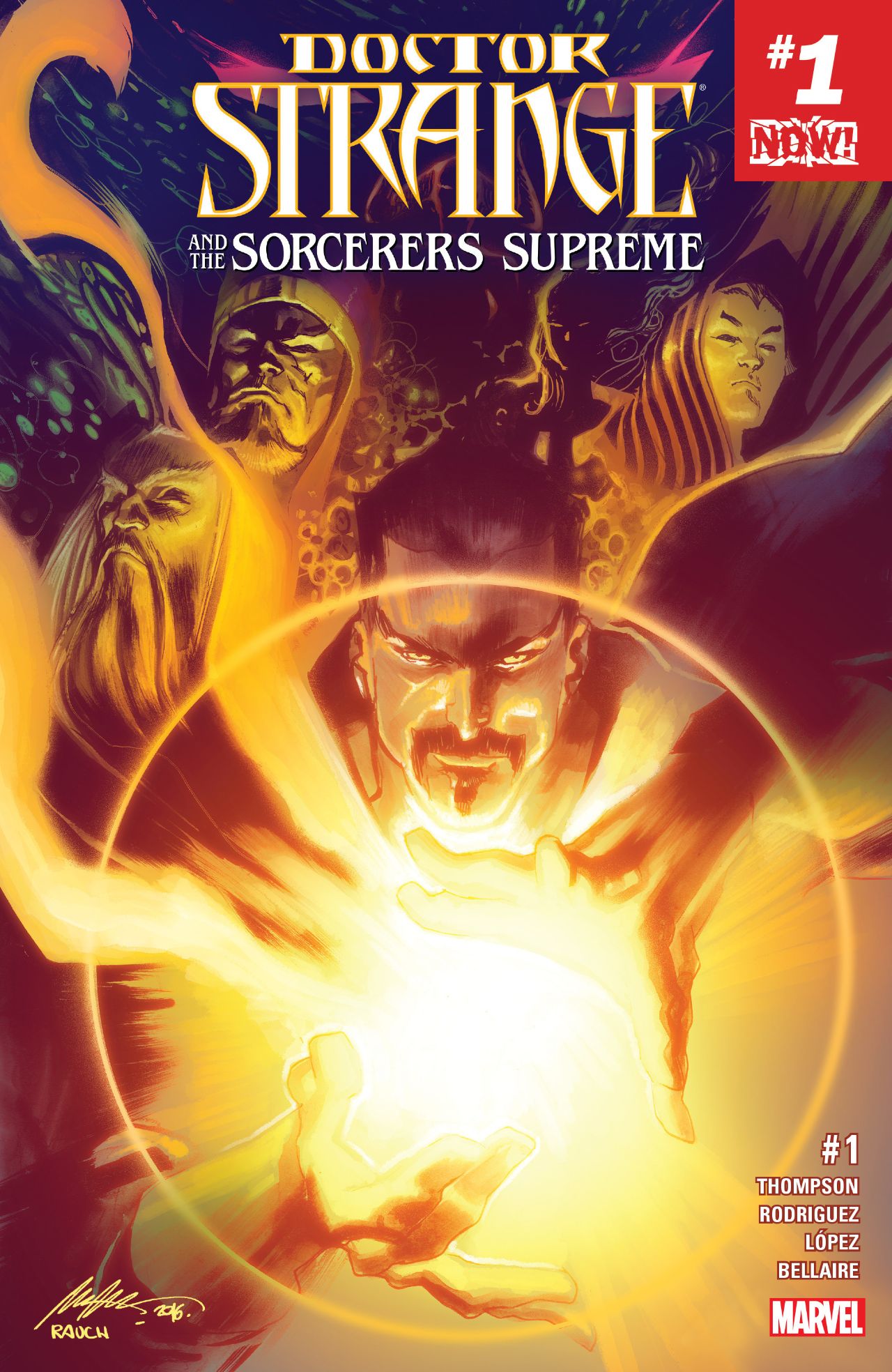 BEFORE HE WAS THE SORCERER SUPREME…STRANGE MASTERED THE MYSTIC ARTS! A master of delicate surgery, DR. STEPHEN STRANGE had no equal…until a freak accident shattered his hands! Now a student of the MYSTIC ARTS, Strange must find a way to master his magical assignment…or throw in his cape and robes for good! Don’t miss this all-new story, as Strange finds that the road to Sorcerer Supreme can be a real pain in the…astral form!

GUARDIANS OF THE GALAXY #13

“CLONE CONSPIRACY” TIE-IN! Even a super hero’s life can get boring. Double-check your gear. Patrol the city. Save the innocent. Report back to your boss, The Jackal. Wait, what? Why is Prowler working for The Jackal? What does the resurrected Madame Web have to do with him? And what has Prowler already done that may have compromised him?!

OUR TREAT: FRANK’S UP TO HIS OLD TRICKS! There are ghouls everywhere on Halloween night, but real monsters don’t wear costumes! The Punisher is searching for a killer, but he’s also being watched…Let’s hope Frank’s quarry doesn’t put costumed civvies in the line of fire!

The time has come! Their ranks shattered by Civil War, their spirits weighted down by a toll both personal and spiritual, Earth’s Mightiest Heroes must find the resolve to stand united one final time against their greatest foe! Captain America! Thor! The Vision! The Wasp! Spider-Man! Hercules! When the dust settles, not a one of these valiant heroes will make it to the final page alive! This is KANG WAR ONE! 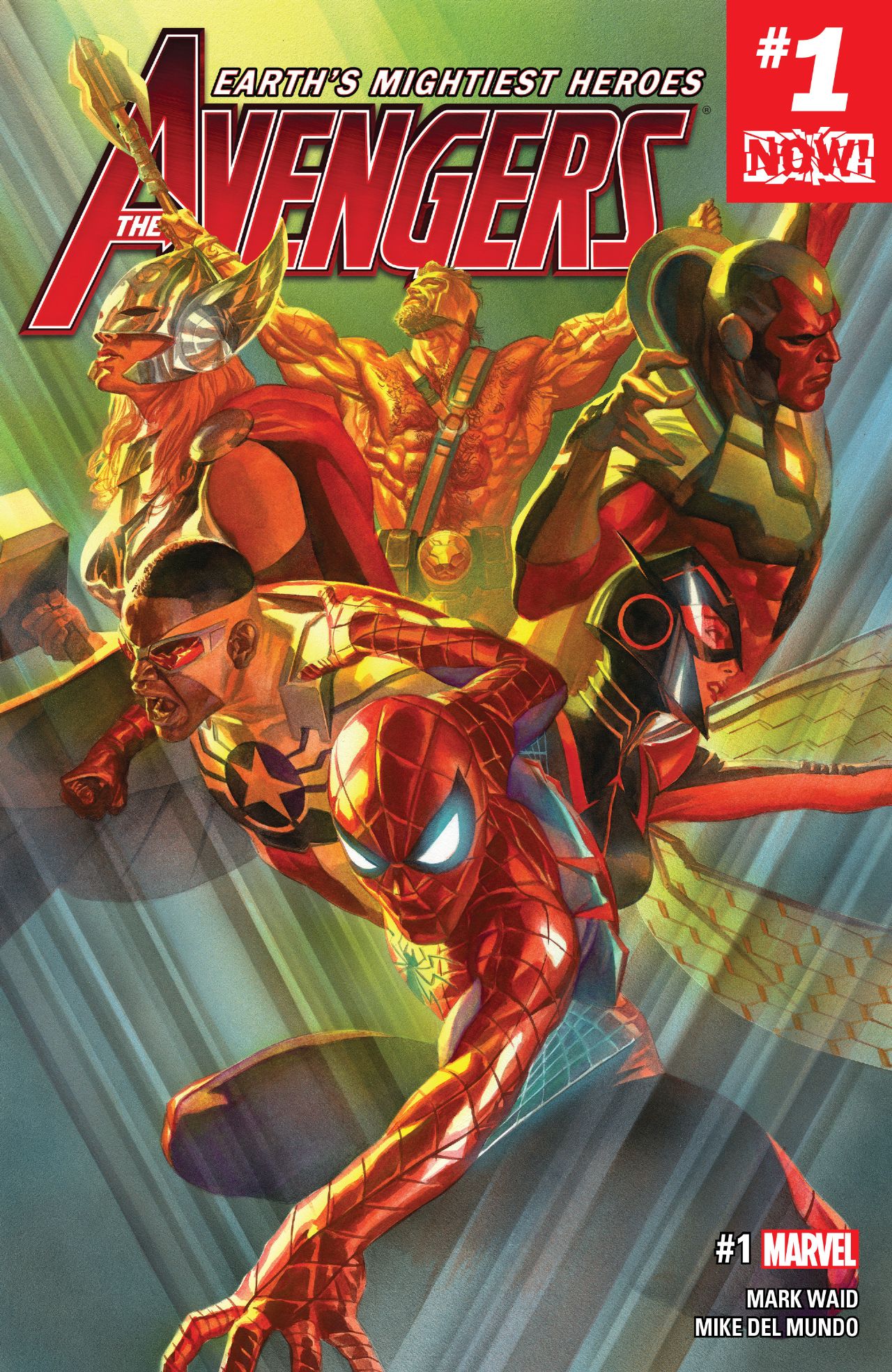 DEADPOOL & THE MERCS FOR MONEY #5

The team-up to end all team-ups is here, as two of the most different Marvel characters worlds’ collide! What new mafia threat is so great that the Punisher needs Doctor Strange’s help? Find out as the Sorcerer Supreme teams with the One Man War on Crime! 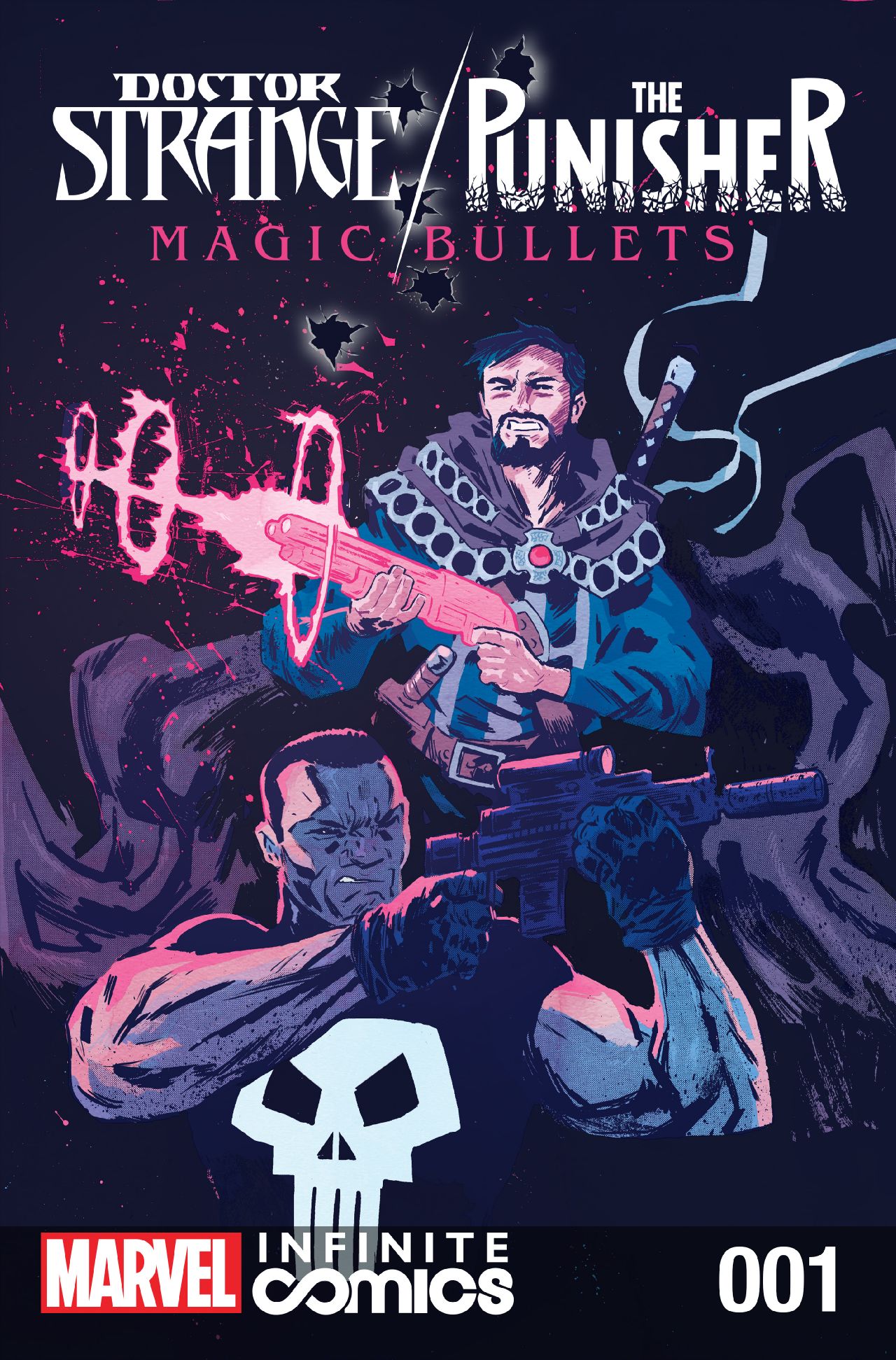 Greg Salinger was just your typical merc for hire – FOOLKILLER – killing those that he deemed to be “foolish.” And for money. But that life is behind him now. Today, he’s a psychiatrist, trying to help others. But now S.H.I.E.L.D. wants him to try to rehabilitate super villains. The catch? If these “patients” don’t make enough progress, they’re dead!

Super heroes – they’re a privileged class. Doing what they want, when they want and suffering no consequences. They have no regard for the ordinary people who are left behind to suffer in their wake. Who will stand up for the little guy? There is a man. If you can find him, and if he believes in your story, he and his friends will put things right. Some call them outlaws, rebels, Robin Hoods. To others, they are heroes. No powers to speak of – just skills, smarts and a burning drive to do the right thing. His name is Hawkeye. Occupy Avengers: It’s time to “Take Back Justice”! 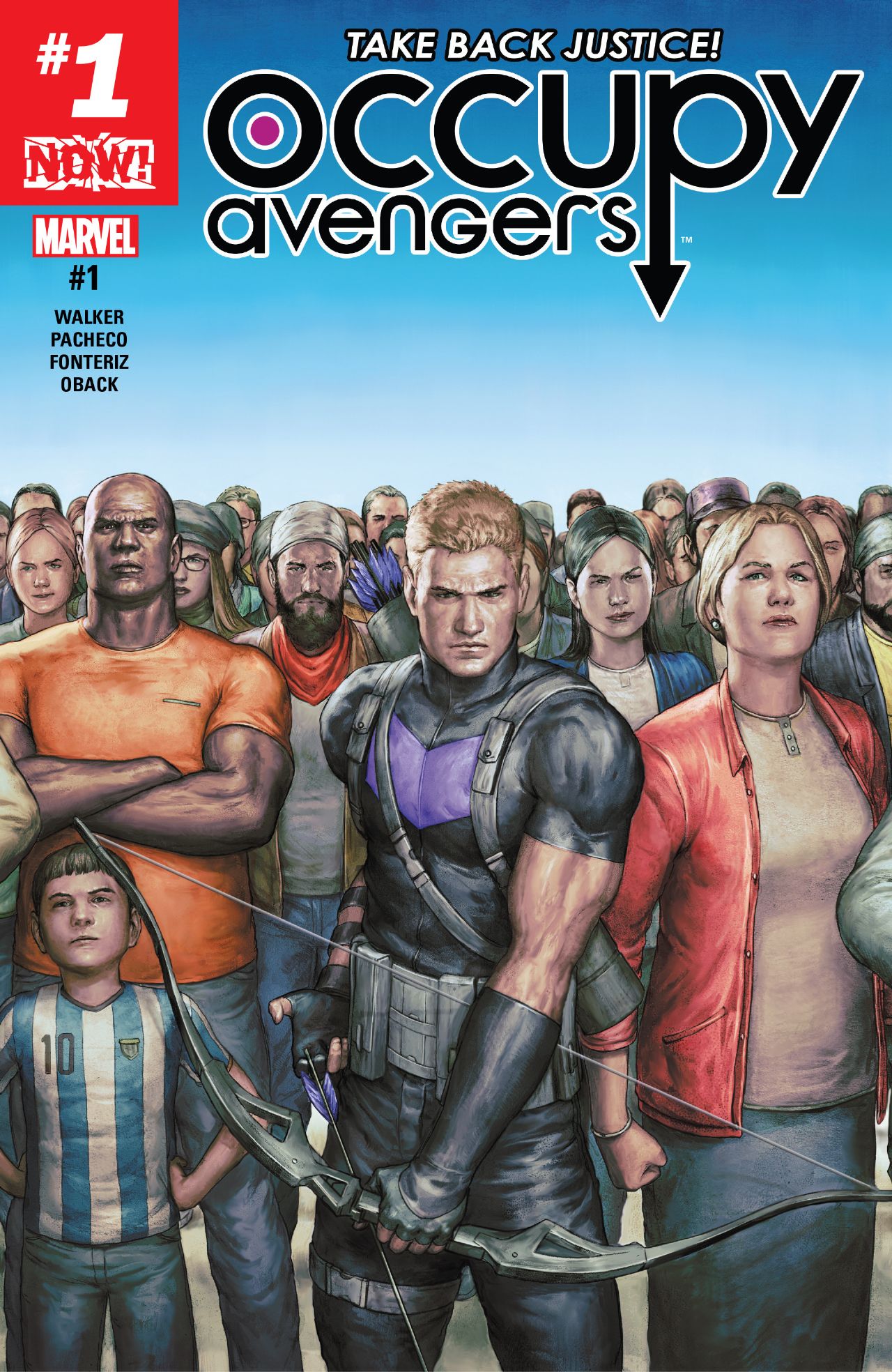 The Odinson’s desperate search to regain his worthiness has taken him out into the cosmos, where he’s learned of the existence of a mysterious other Mjolnir. This weapon of unimaginable power, a relic from a dead universe, is the key to Odinson’s redemption — but some of the greatest villains of the Marvel Universe are now anxious to get their hands on it as well. Can The Odinson reclaim his honor, or will the power of thunder be wielded for evil? The quest for the hammer begins here. 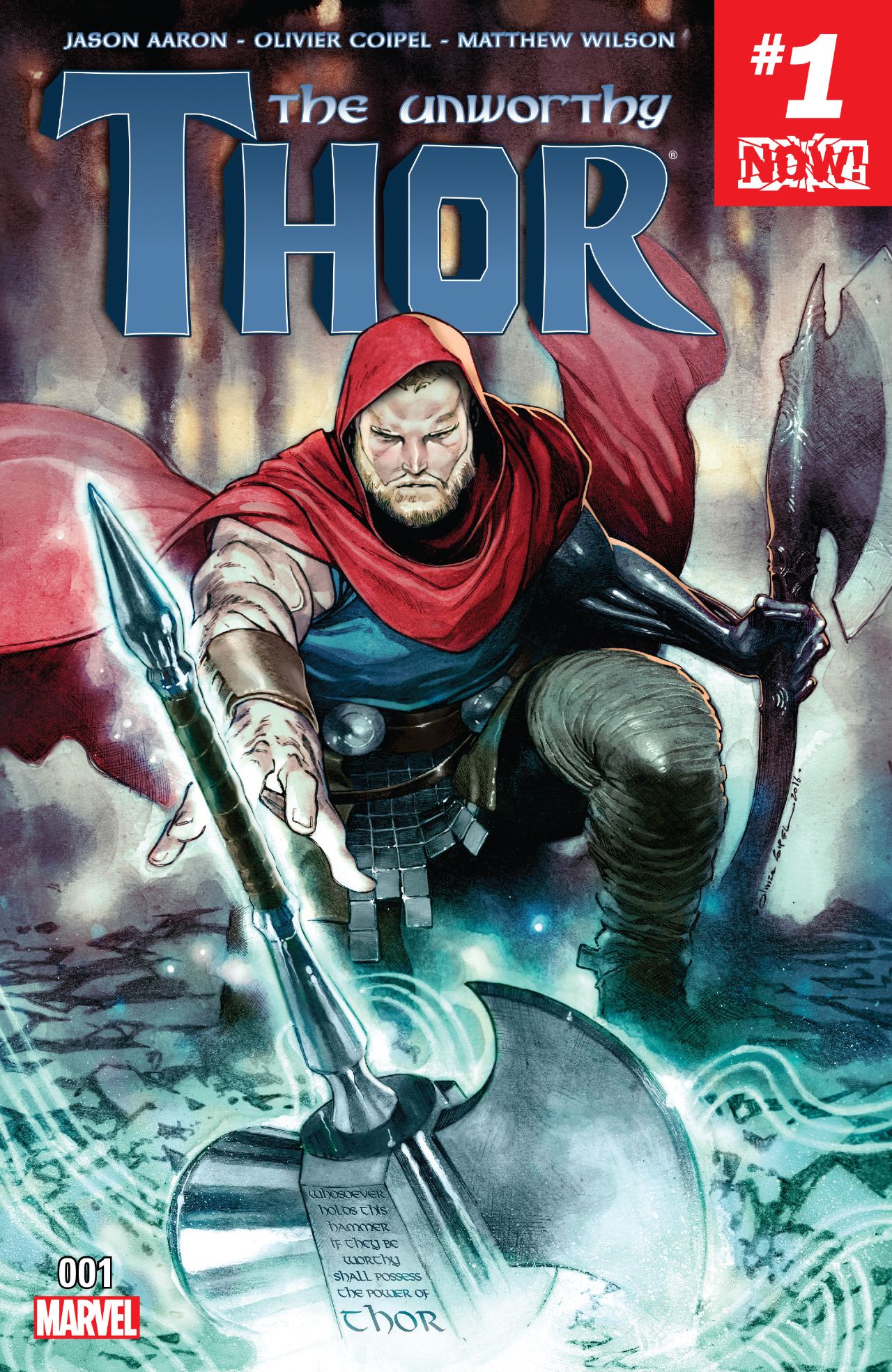 The Parker family is web-slinging and wall-crawling their way into your hearts and into comic shops later this year! Life is good for Peter Parker and Mary Jane; their daughter Annie is their pride and joy, they’re both working and (barely) making ends meet, they’re keeping the streets of New York City safe from super villains…you know, normal family stuff. Oh, did we mention MJ and Annie have Spider-Powers –– just like Peter?! Being Spider-Man just became a family affair…

The time has come! Their ranks shattered by Civil War, their spirits weighted down by a toll both personal and spiritual, Earth’s Mightiest Heroes must find the resolve to stand united one final time against their greatest foe! Captain America! Thor! The Vision! The Wasp! Spider-Man! Hercules! When the dust settles, not a one of these valiant heroes will make it to the final page alive! This is KANG WAR ONE!

Writer ROXANE GAY (Bad Feminst, Hunger) spins a Wakandan love story – its tenderness matched only by its brutality. You know them now as The Midnight Angels, but in this story they are just Ayo and Aneka, young women recruited to become Dora Milaje, an elite task force trained to protect the crown at all costs. And in a special backup story, acclaimed poet YONA HARVEY (Hemming the Water) explores the true origins of The People’s mysterious leader Zenzi. Black Panther thinks he knows who Zenzi is and how she got her powers, but he only knows part of the story… Illustrated by rising star AFUA RICHARDSON (Genius). What happens when your nation needs your hearts and minds, but you already gave them to each other? Illustrated by industry veteran ALITHA E. MARTINEZ (Iron Man, Black Panther). 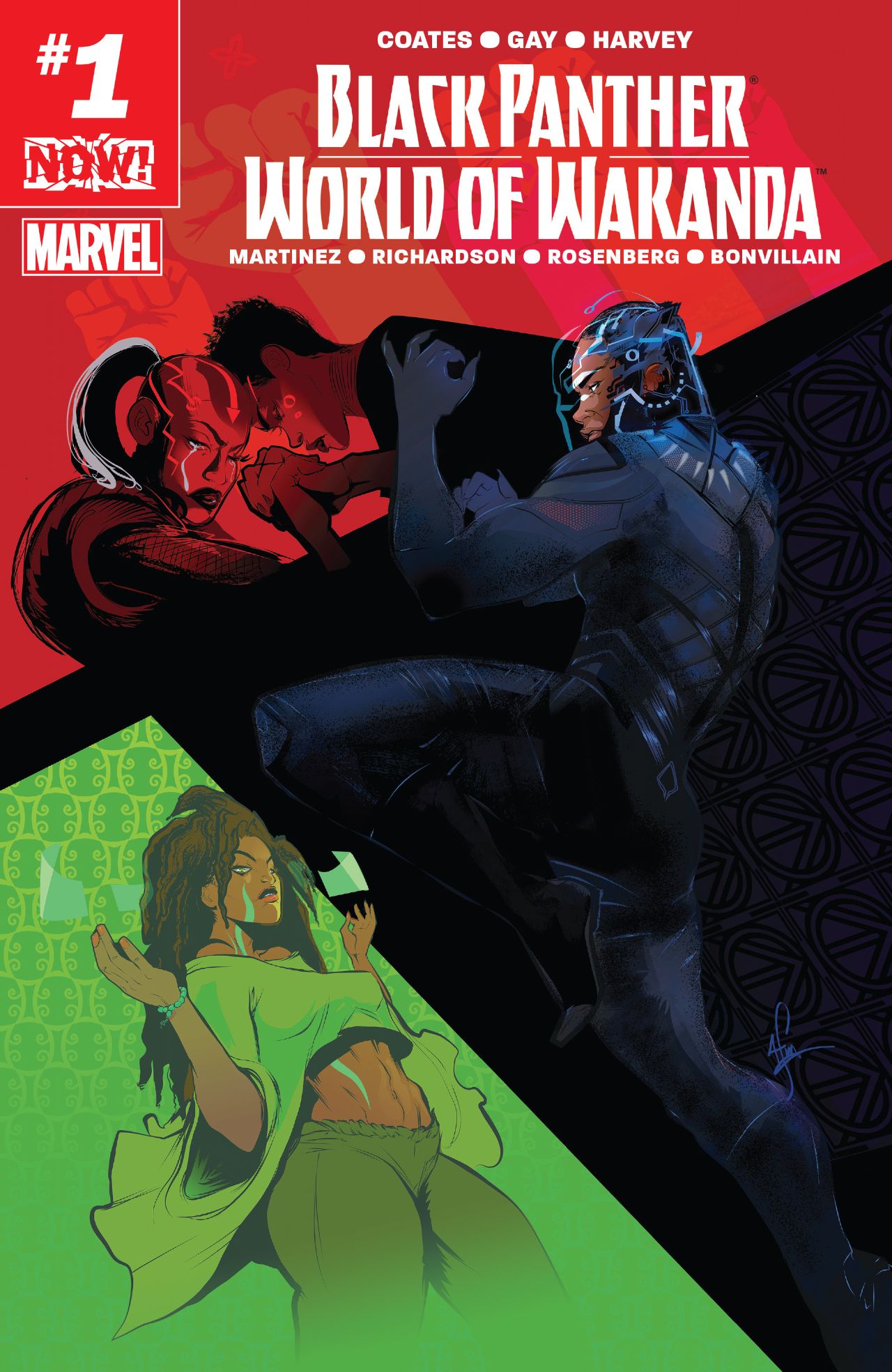 DEADPOOL: BACK IN BLACK #3

From the violent streets of Chicago, a new armored hero rises! Clad in her very own Iron Man armor, Riri Williams is ready to show the Marvel Universe what she can do as the self-made hero of tomorrow. But is she ready for all the problems that come with stepping into Iron Man’s jet boots? Where’s a genius billionaire playboy philanthropist when you need one? 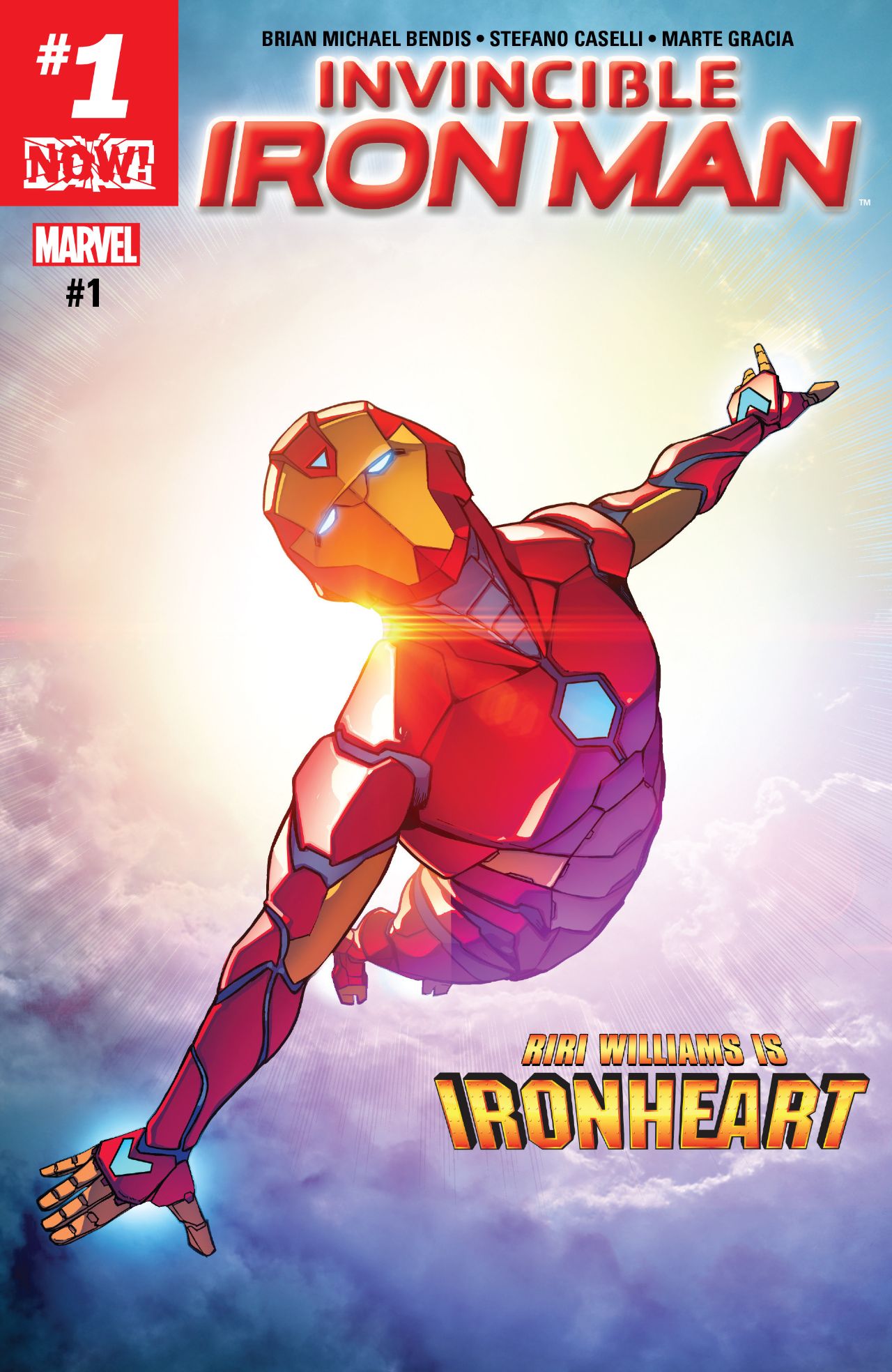 MARVEL UNIVERSE GUARDIANS OF THE GALAXY #14

EVIL HAS BEEN UNLEASHED ON THE UNIVERSE. Thanos, possibly the most evil individual in the Marvel Universe, is back…and he’s out for vengeance on all who would oppose him. Unfortunately for the Mad Titan, he’s also heading for an unexpected reckoning…with his family. Take an ongoing walk on the dark side of the galaxy, following the deadly trail of destruction left in the wake of…THANOS! 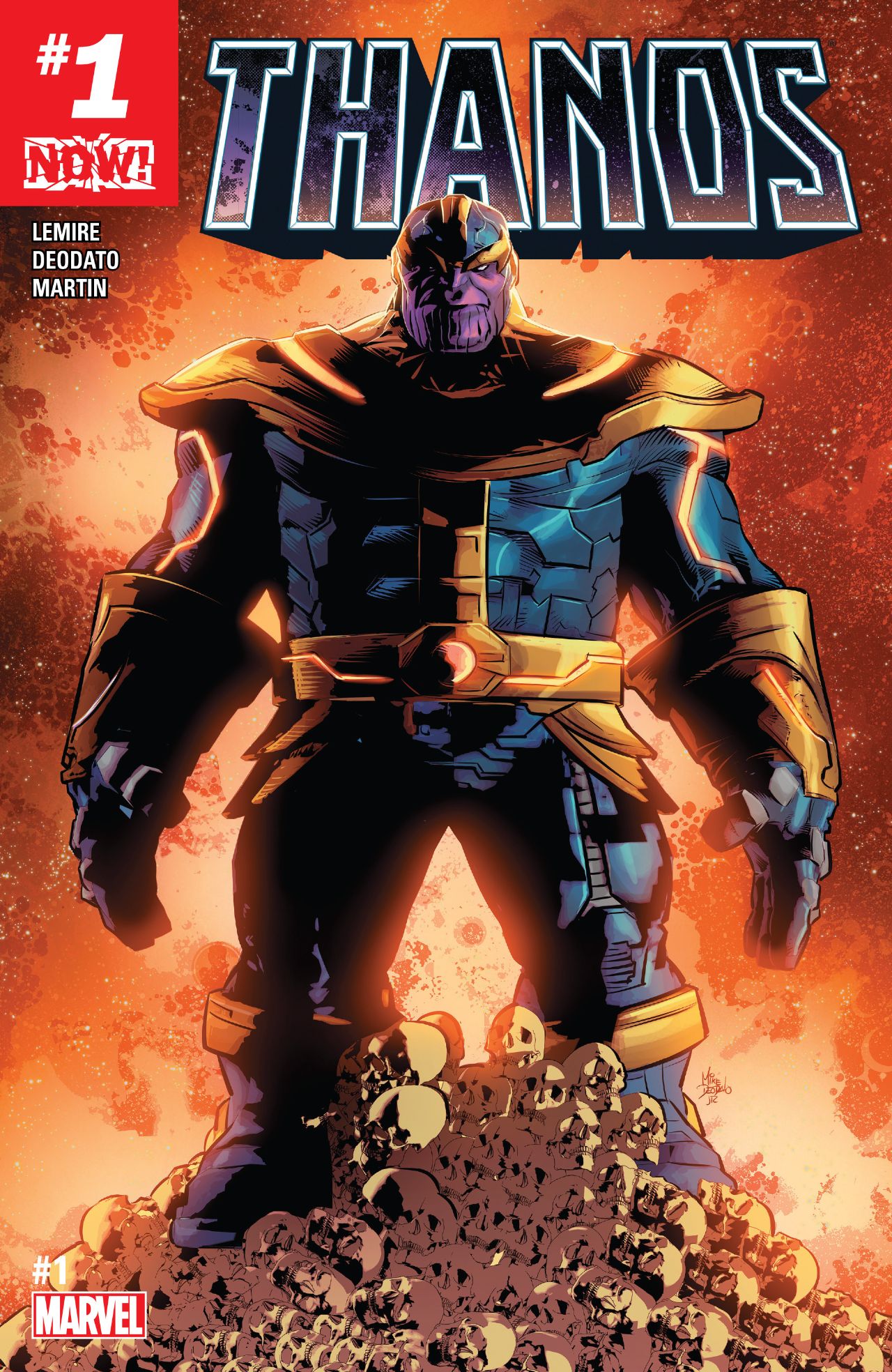 Caught in the crossfire between the Uncanny X-Men and the Dark Riders, Young X-Man ELIXIR was a casualty of war. But can a mutant whose power deals in life and death stay gone for long? Elixir is BACK and he’s come to take revenge…on BOTH parties! Plus: Domino stages her own strike against the deadly Terrigen Mists!

It’s time to give thanks for…THE PUNISHER?! When an op goes south, Frank Castle finds himself in a subterranean game of cat and mouse! It’s a life or death tale that’ll satisfy more than any turkey dinner!

Young X-Man Idie Okonkwo has come a long way since she left her home in Nigeria to attend Xavier’s School. But has her time with the X-Men prepared her for her biggest adventure yet: DATE NIGHT?! Plus: Dani Moonstar returns!

Don’t miss Spider-Man’s adventure in Mexico City! And Cloak and Dagger at the Parker Industries office in Shanghai! And if that weren’t enough, star of stage and screen WAYNE BRADY tries his hand at comics with the funniest Spider-Man story EVER!

DOCTOR STRANGE AND THE SORCERERS SUPREME #2

Who – or what – is the Cosmic Jailer? What being is powerful enough to chain Eternity itself? That is the mystery Galactus must solve – before it’s too late. Ultimate problems require ultimate solutions, and Galactus will call on those who helped cure his insatiable hunger. Captain Marvel, Black Panther, Blue Marvel, Spectrum and Ms. America! Together they are the Ultimates, protectors of the Omniverse. But now they are something more – the newest heralds of Galactus, the Lifebringer!

VENOM IS BACK AND BADDER THAN EVER! The symbiote you know and love has returned to New York City. No more “Agent of the Cosmos.” No more “Lethal Protector.” It’s time for a new Venom, and it’s great to be bad. 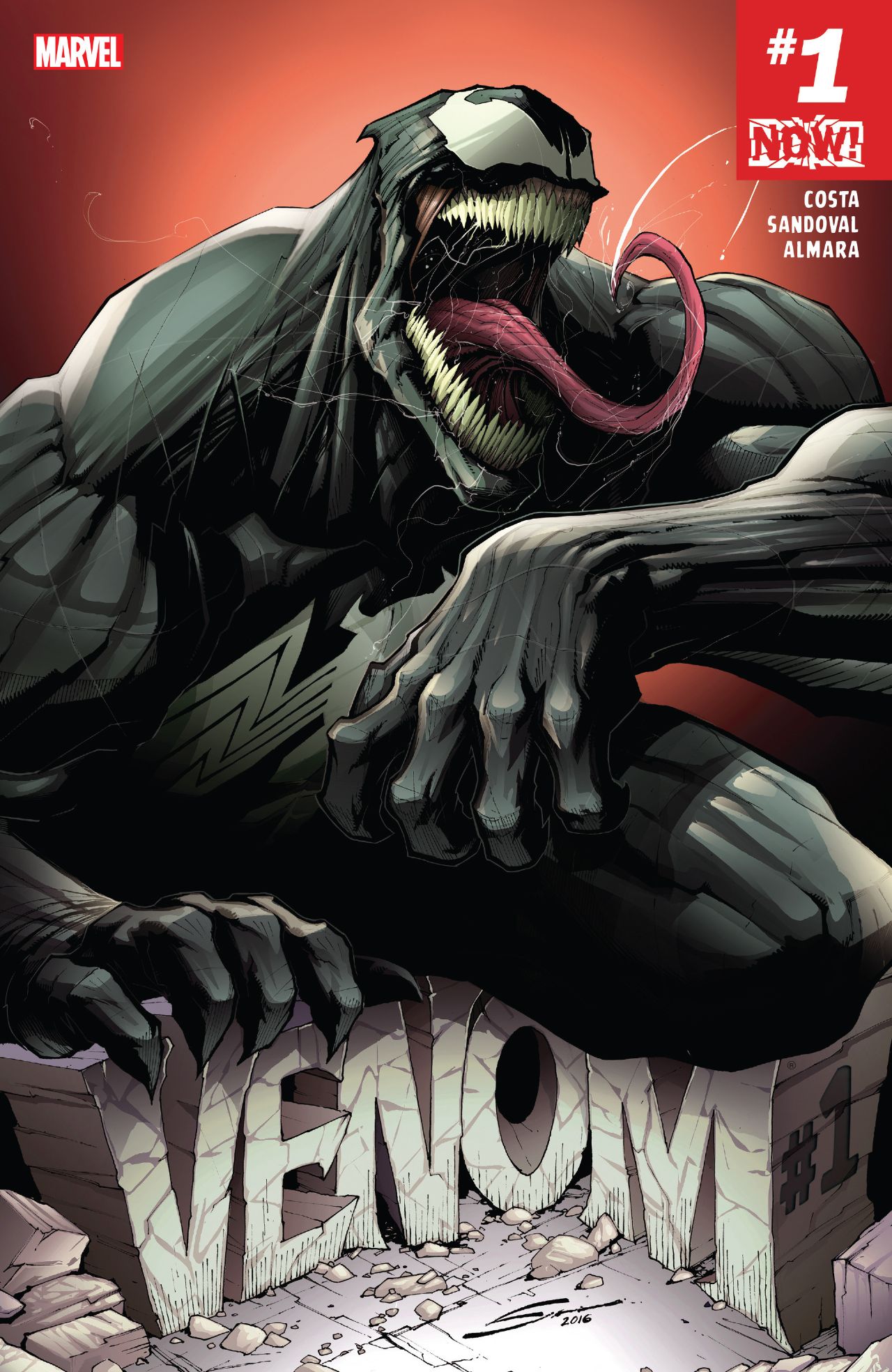 Marvel Unlimited members have access to some of the greatest Marvel Comics featuring The Avengers, Spider-Man, Daredevil, Doctor Strange, and more! With May’s update, Marvel Unlimited will also be expanding its back catalog with the following series: Power Pack (1984), Deadly Hands of Kung Fu (1974) and X-Factor (1986)!