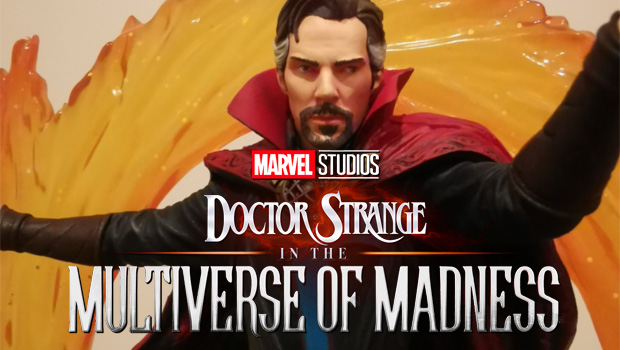 This marvelous statue from Diamond Select Toys features one of the world’s most powerful Doctors, the enigmatic Doctor Stephen Strange who also happens to be one of the most powerful Sorcerer Supremes of the Marvel multiverse. Consider him Earth’s defense against the nefarious mystical and magical denizens that threatens humanity. 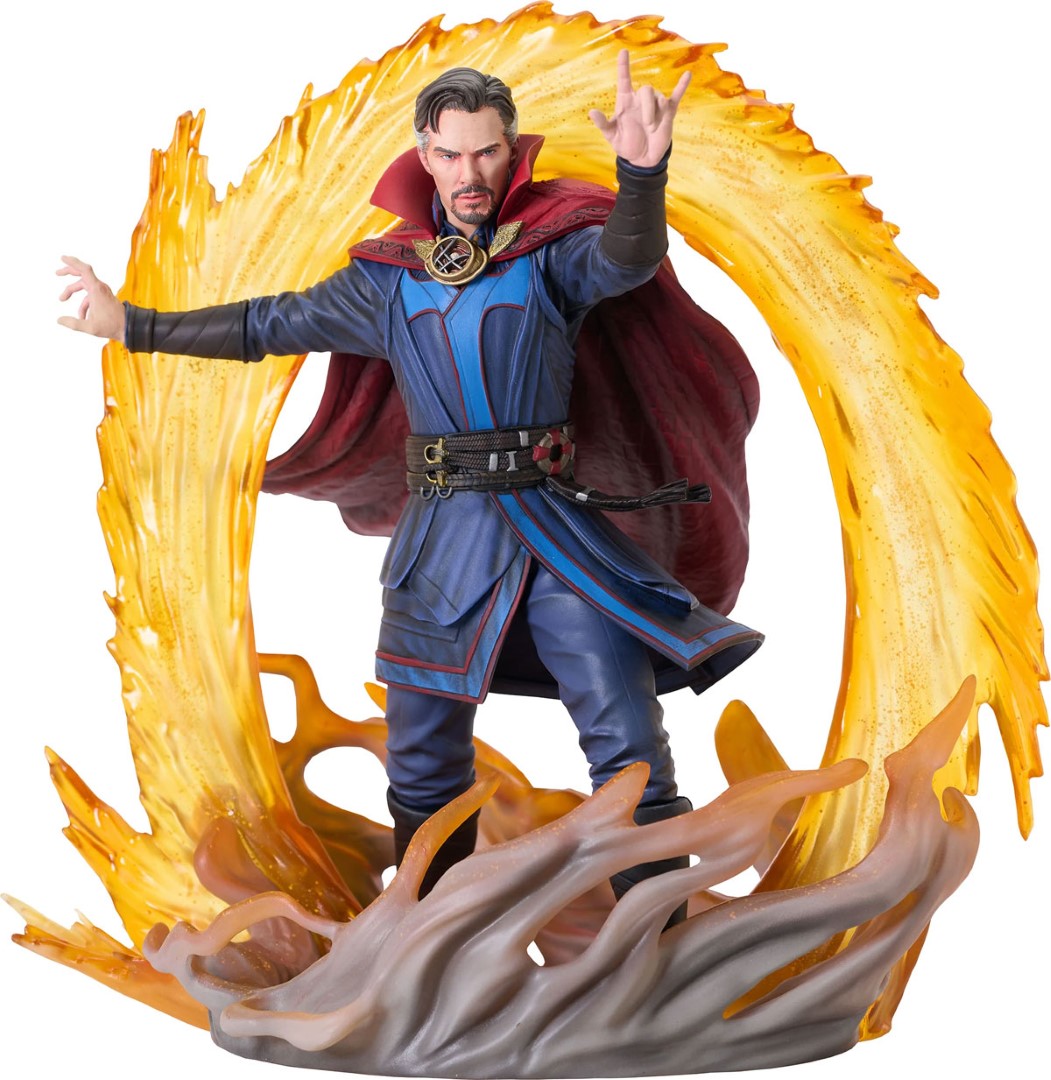 The statue is also based on the likeness of Benedict Cumberbatch from the films and more importantly, they have gotten this likeness to a t. So if you’re a fan of MCU Doctor Strange films, then this statue is for you with the good doctor captured perfectly as he steps through a mystical portal while casting a spell. 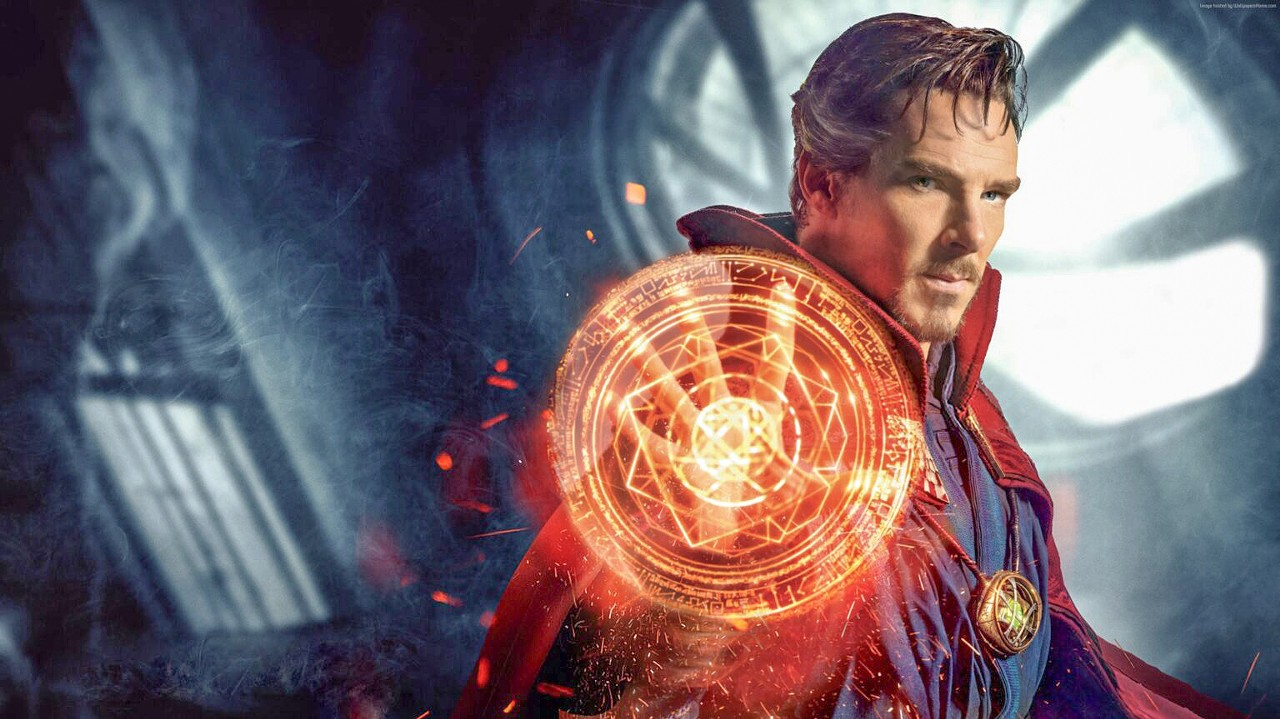 So who is Doctor Strange? 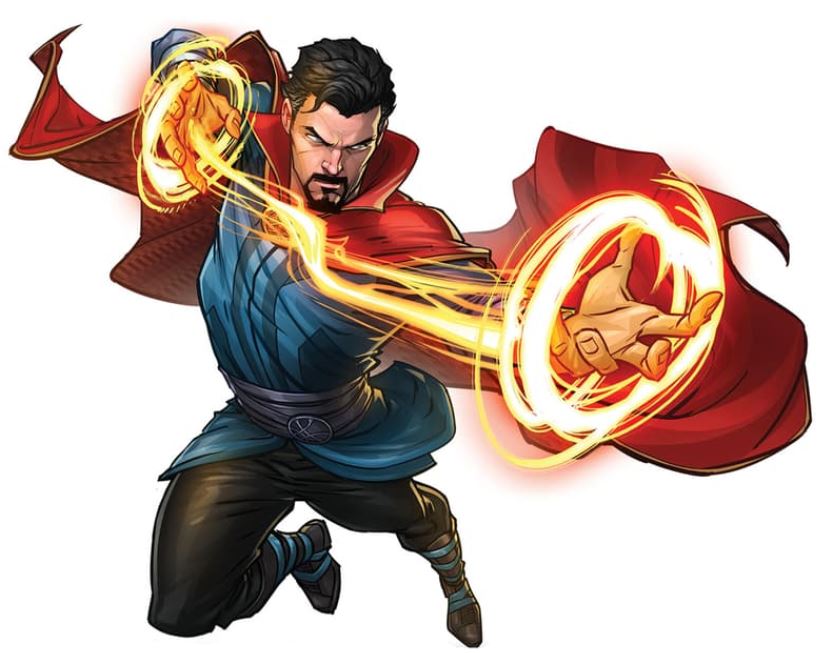 For the uninitiated Doctor Stephen Strange was once a formerly a renowned surgeon that after an incident saw him seek out the mystic arts that led him to serving as the Sorcerer Supreme—Earth’s foremost protector against magical and mystical threats. Best of all, Benedict Cumberbatch has successfully transferred this comic book character to the big screen and this is statue is a celebration of the character and latest film, the Multiverse of Madness. 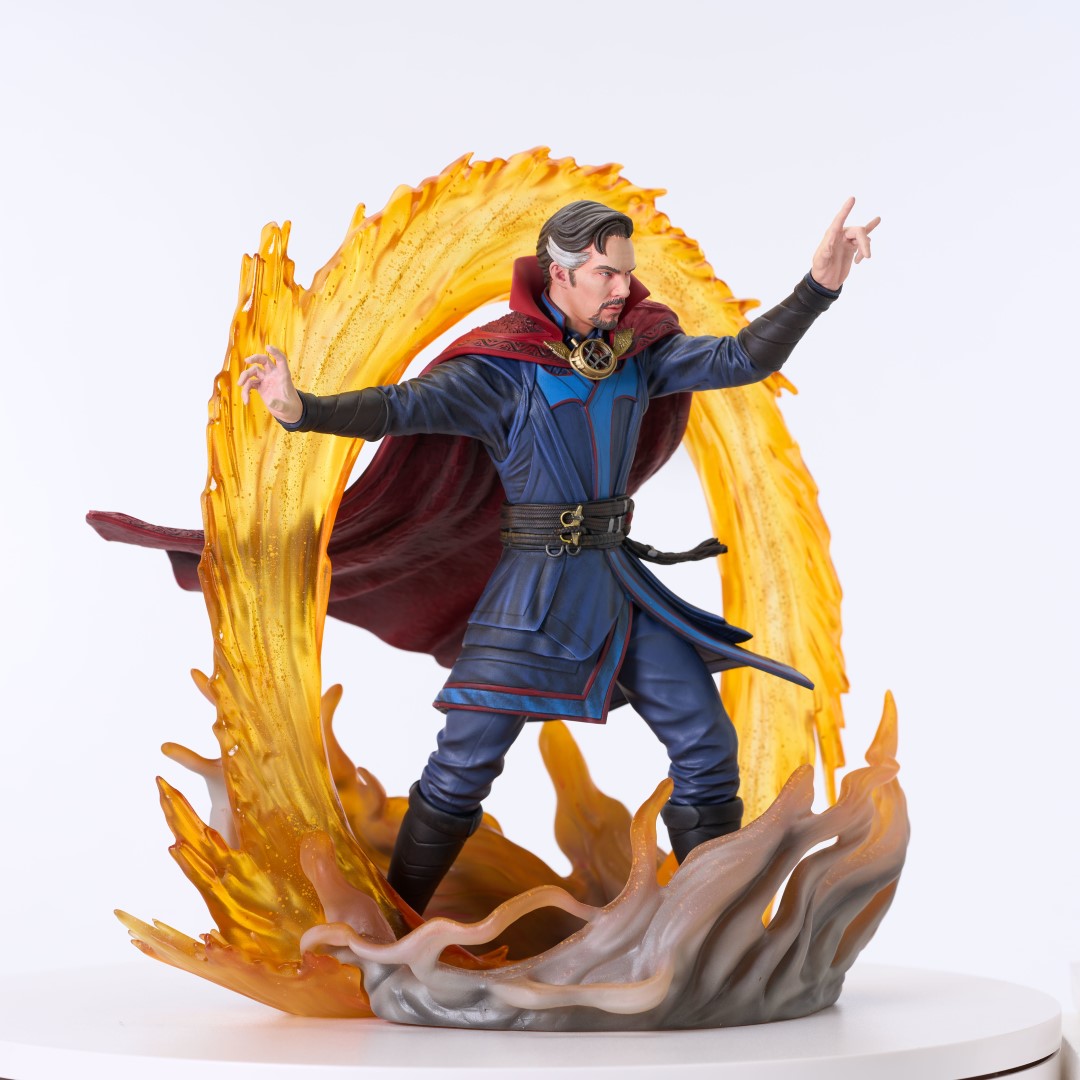 The statue is superbly packed from Diamond Select Toys with the packaging part box, part blister so you can see the figure inside. Additionally, the box is decorated with the Doctor Strange paraphernalia which really showcases the psyche of the Sorcerer Supreme. 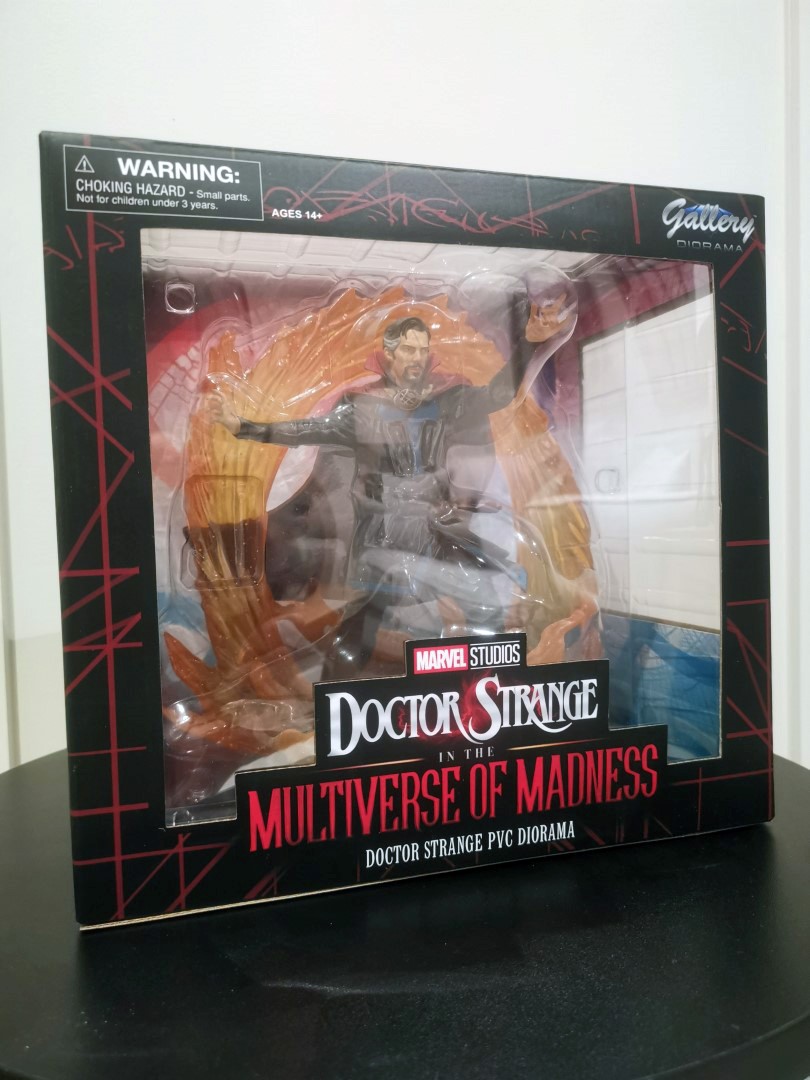 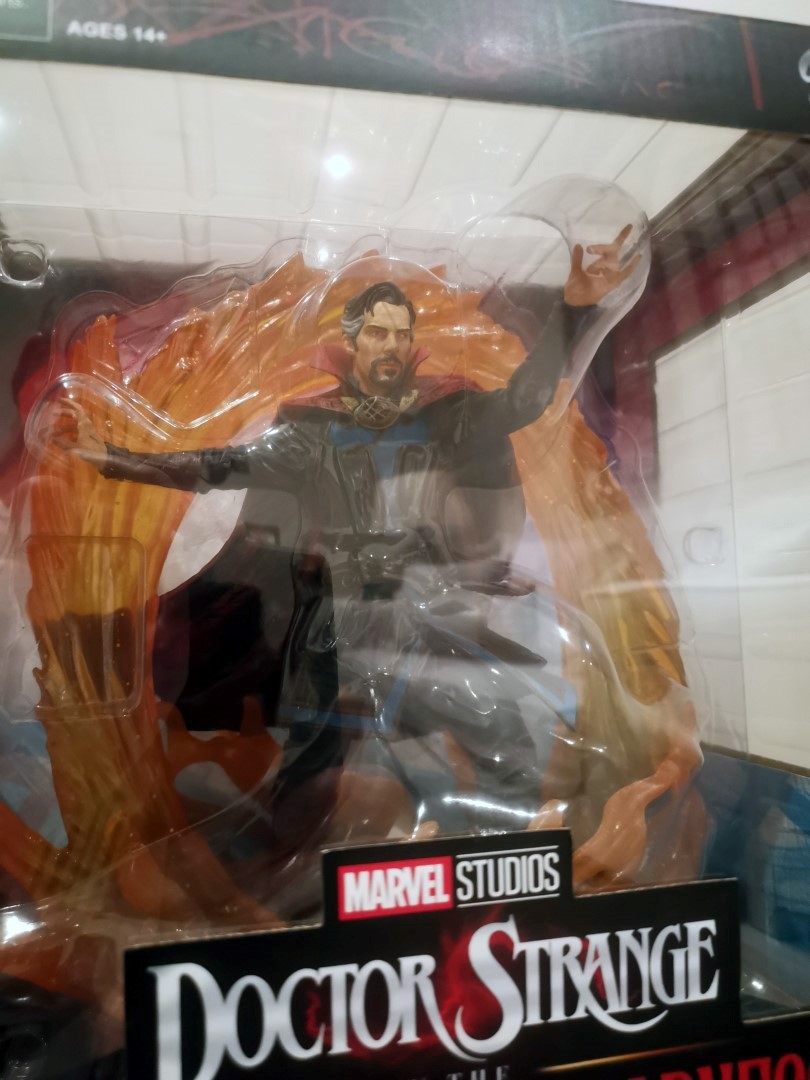 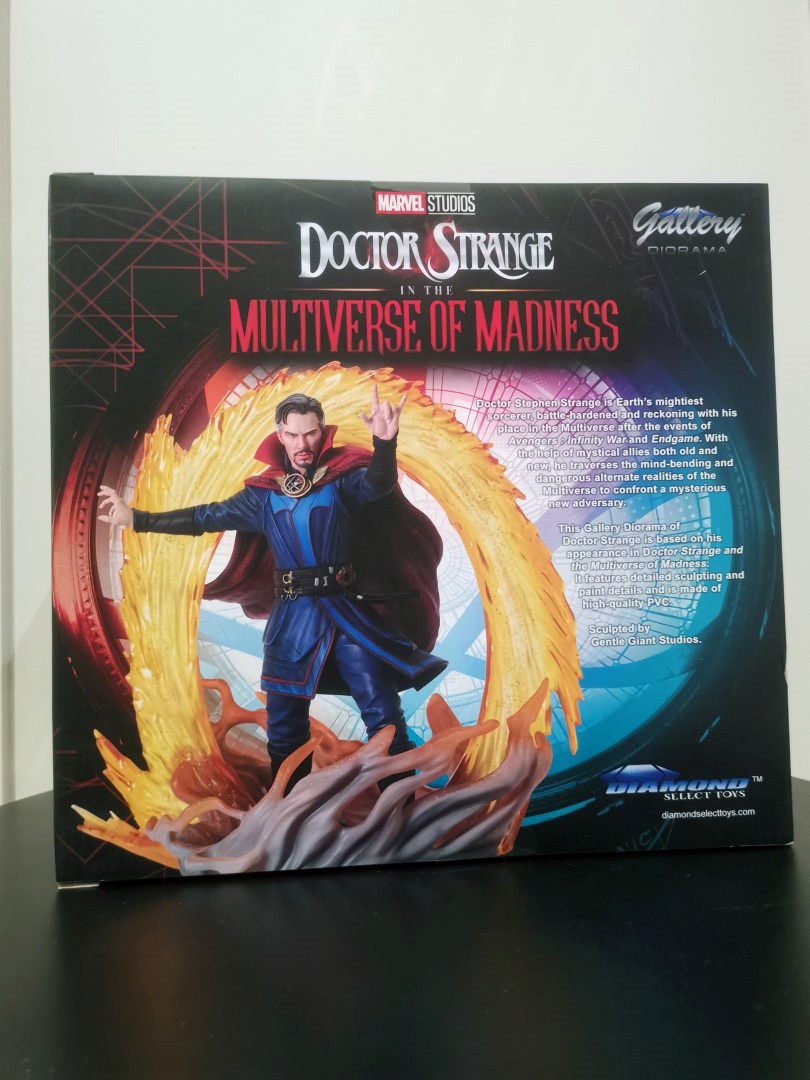 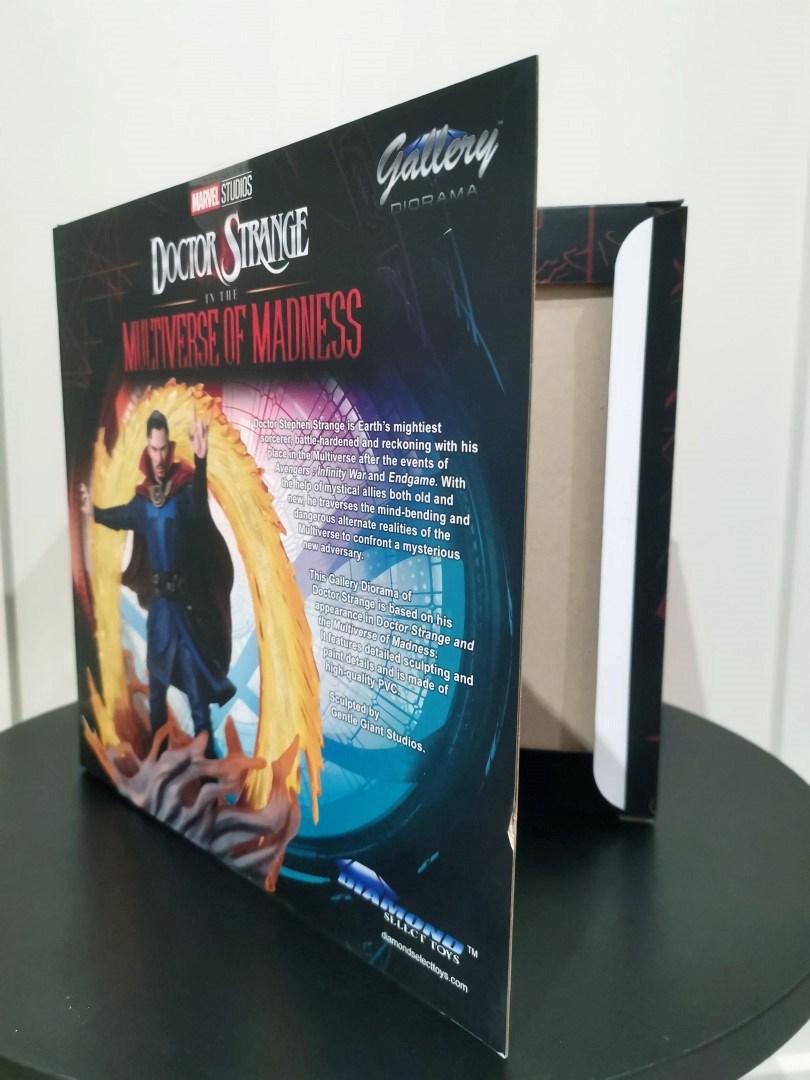 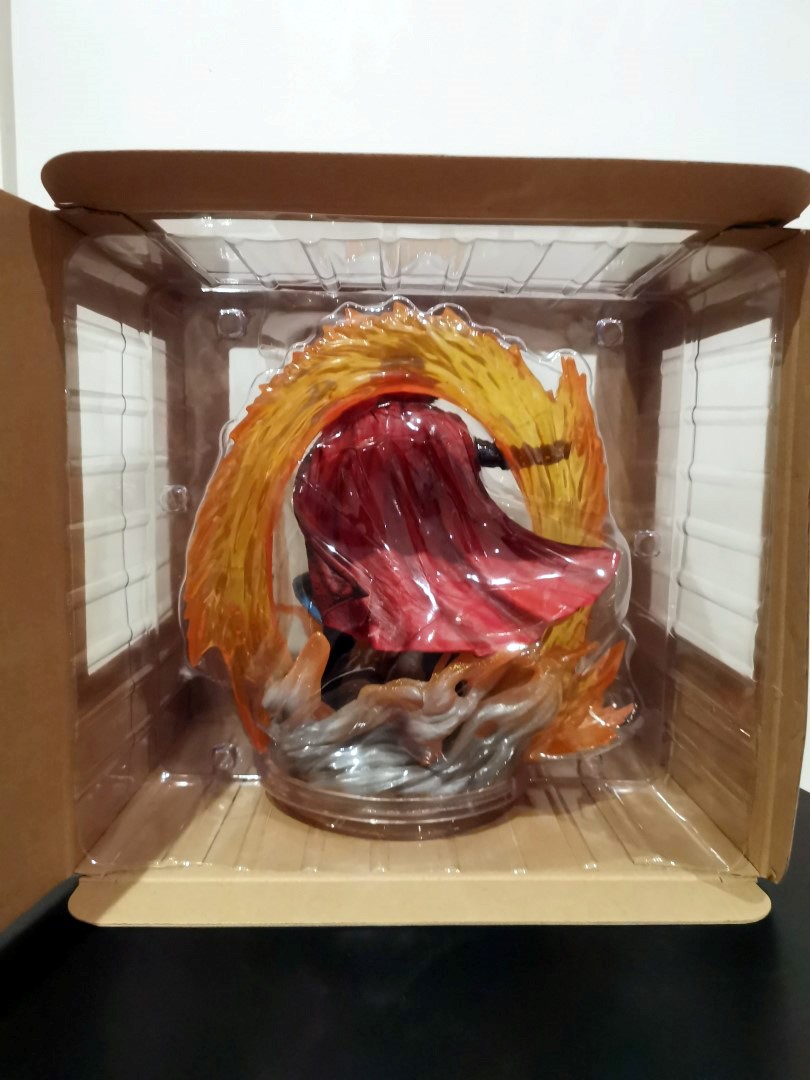 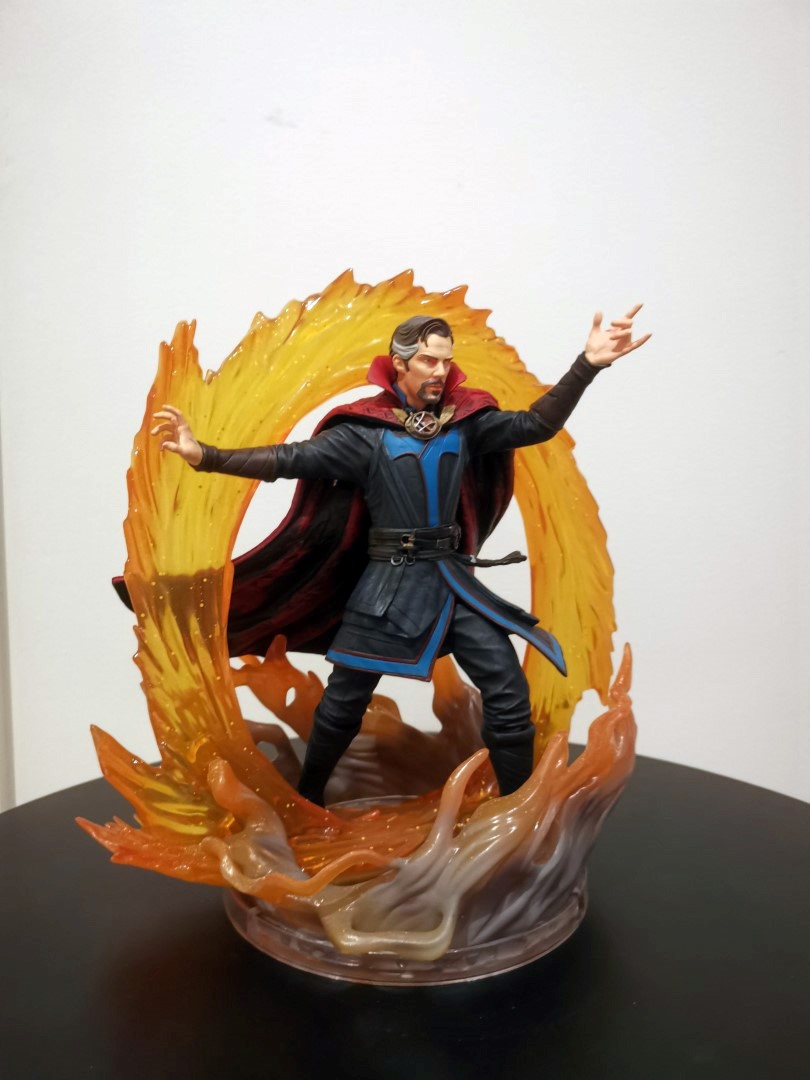 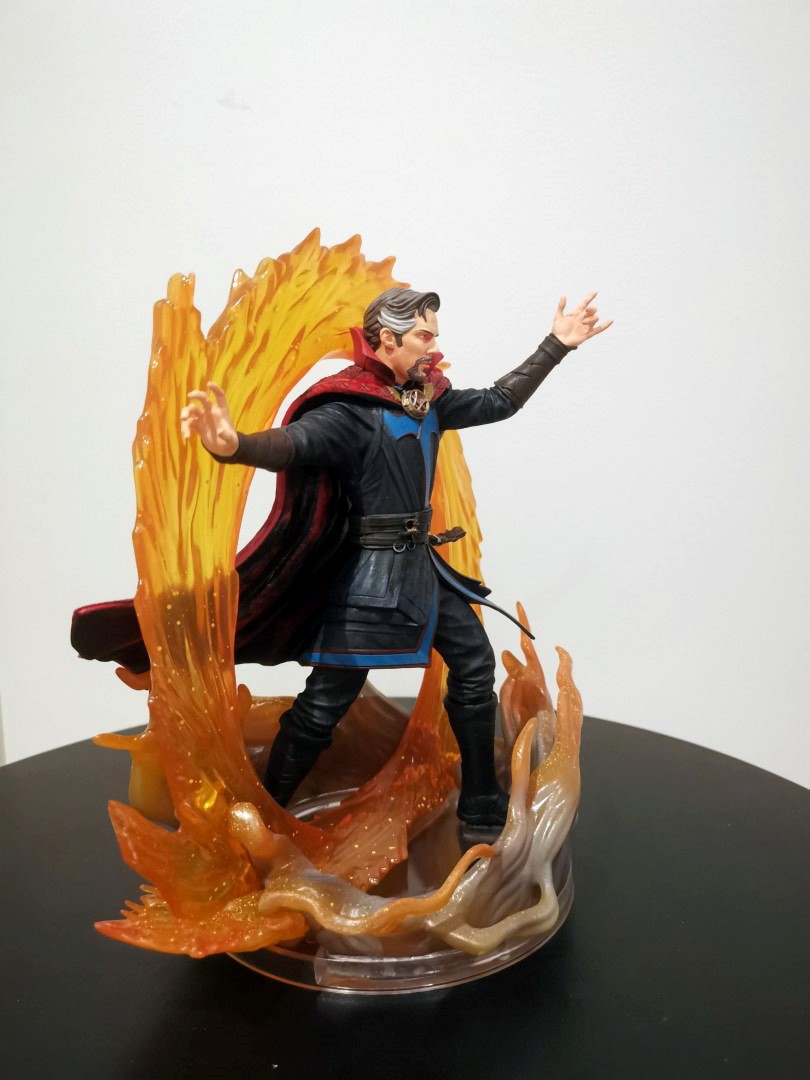 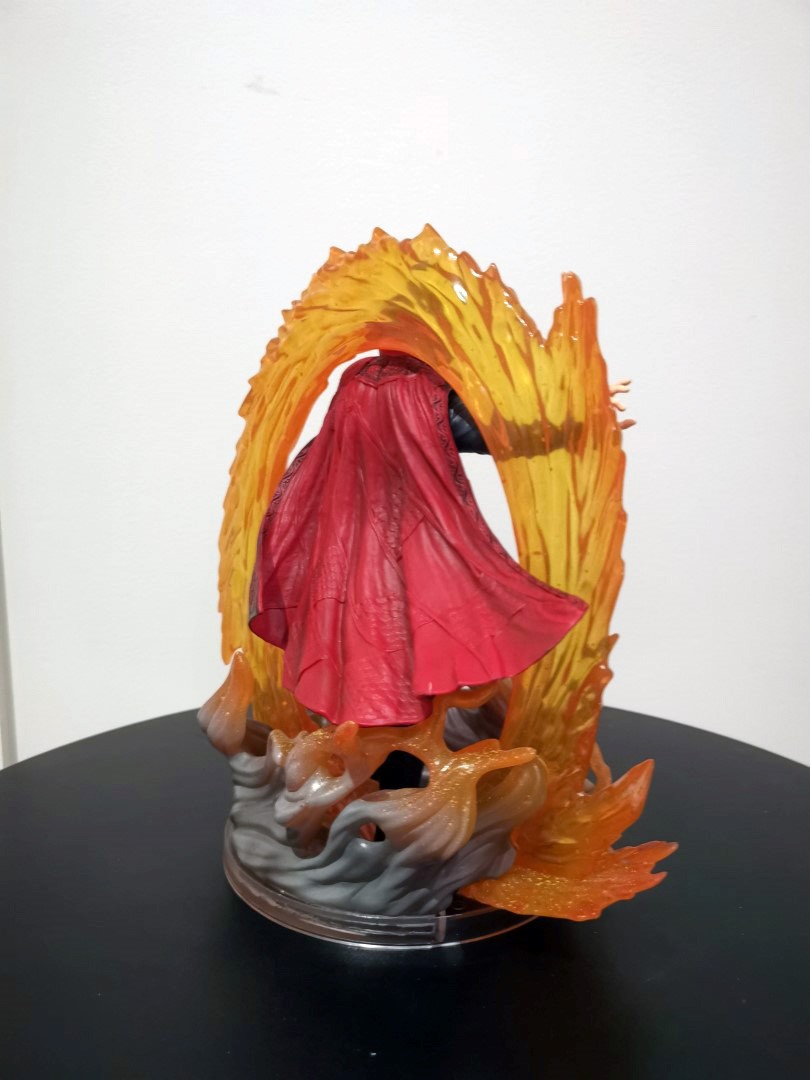 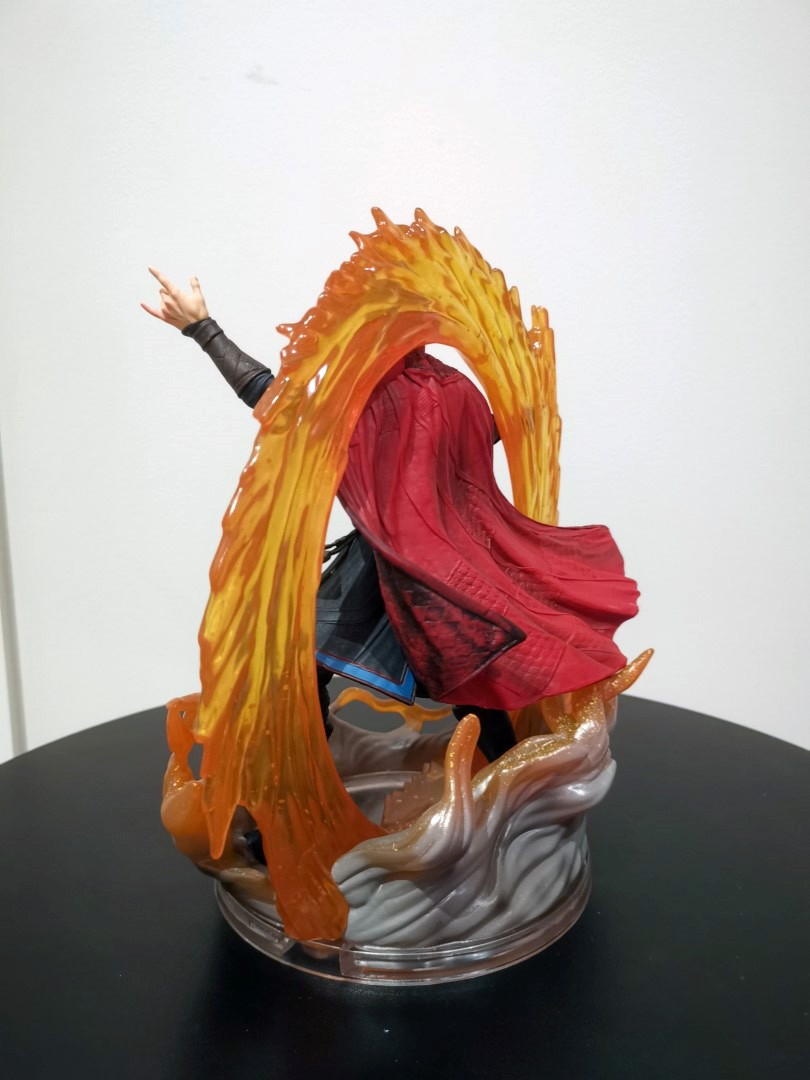 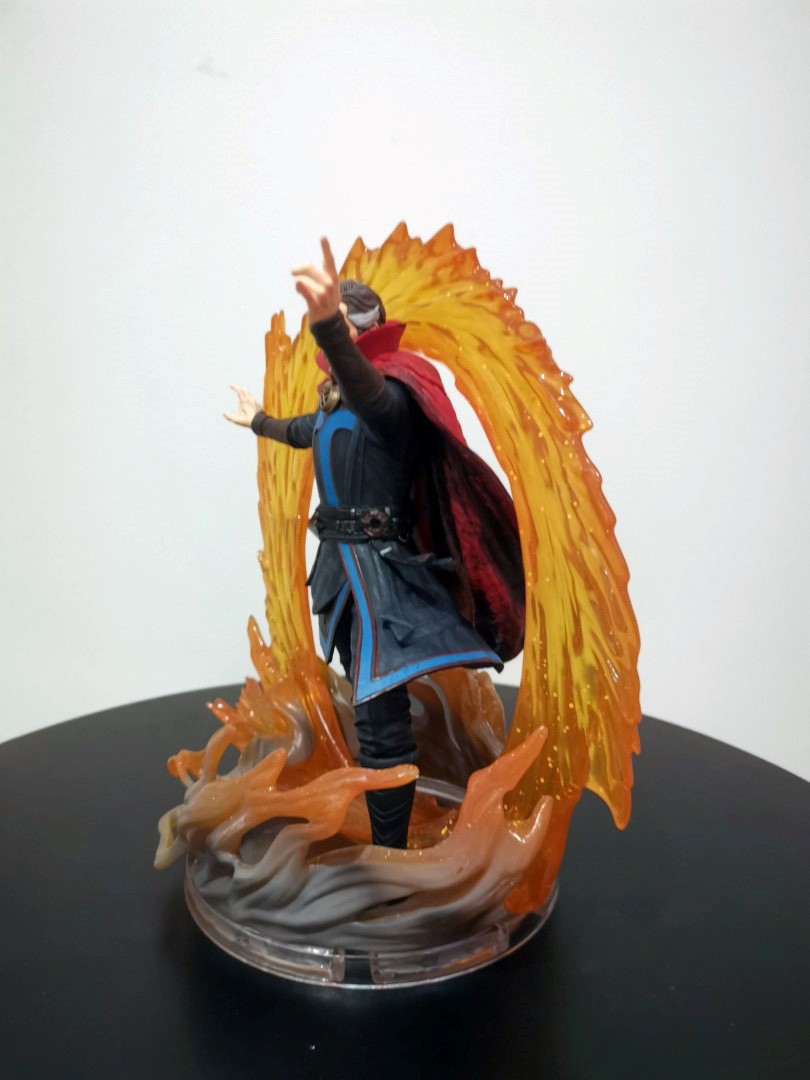 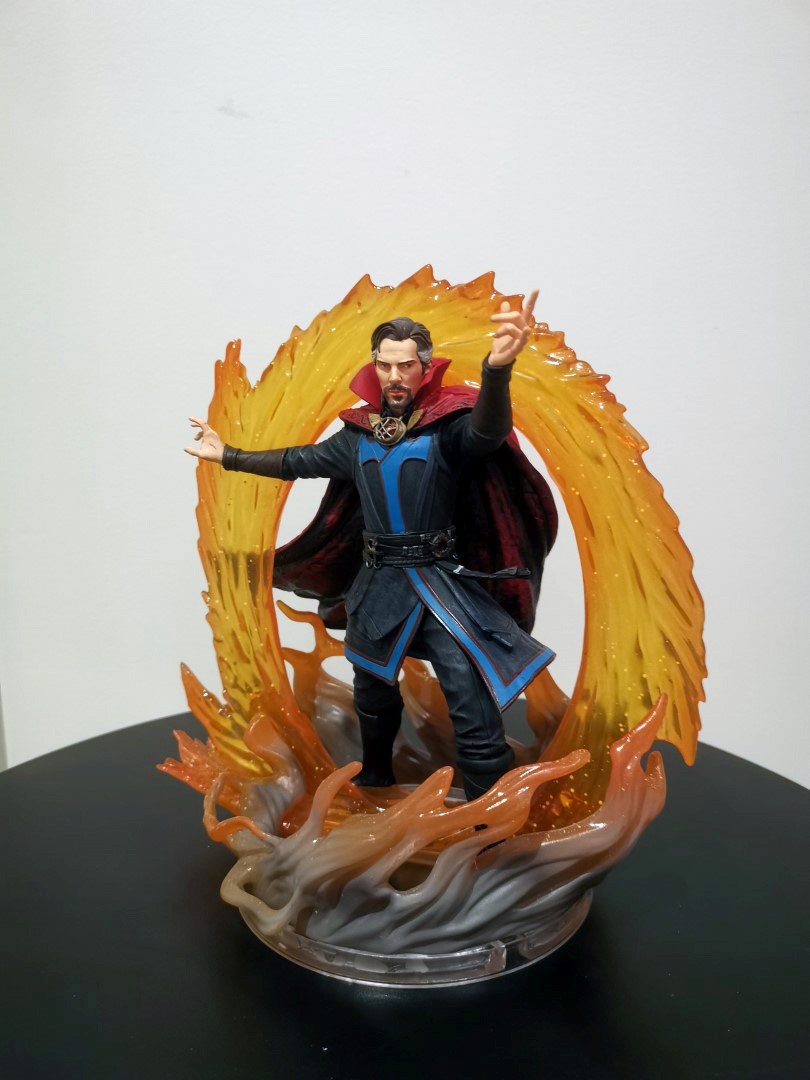 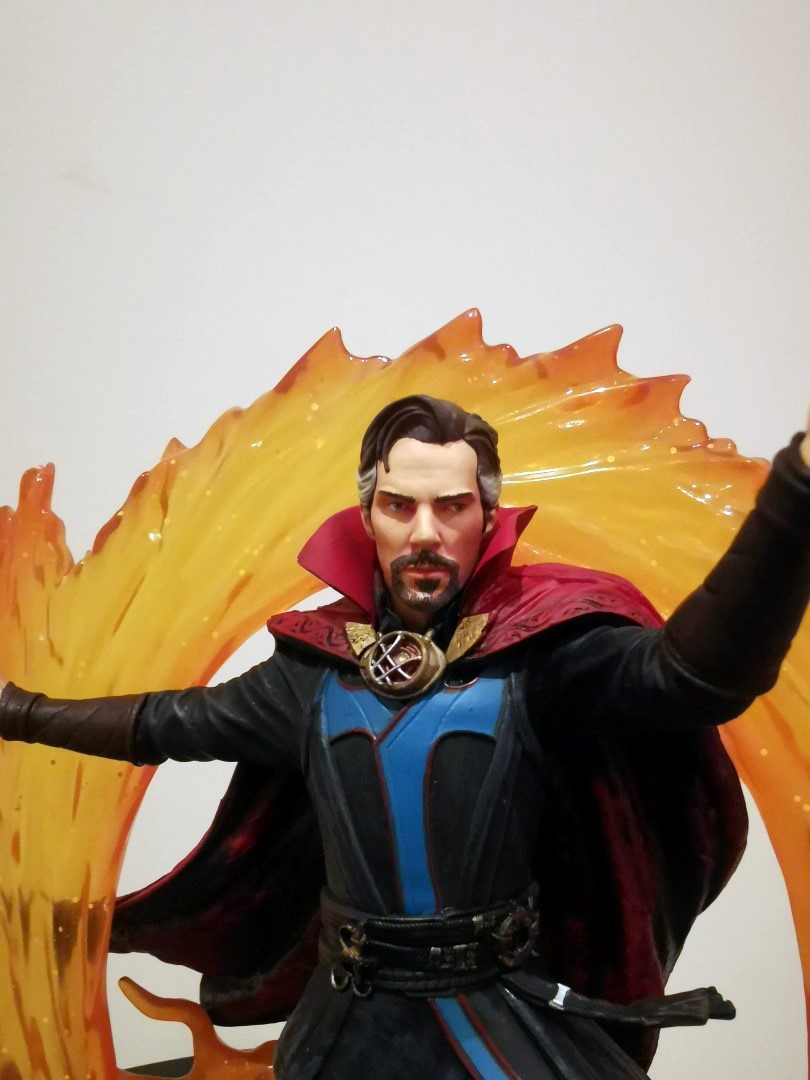 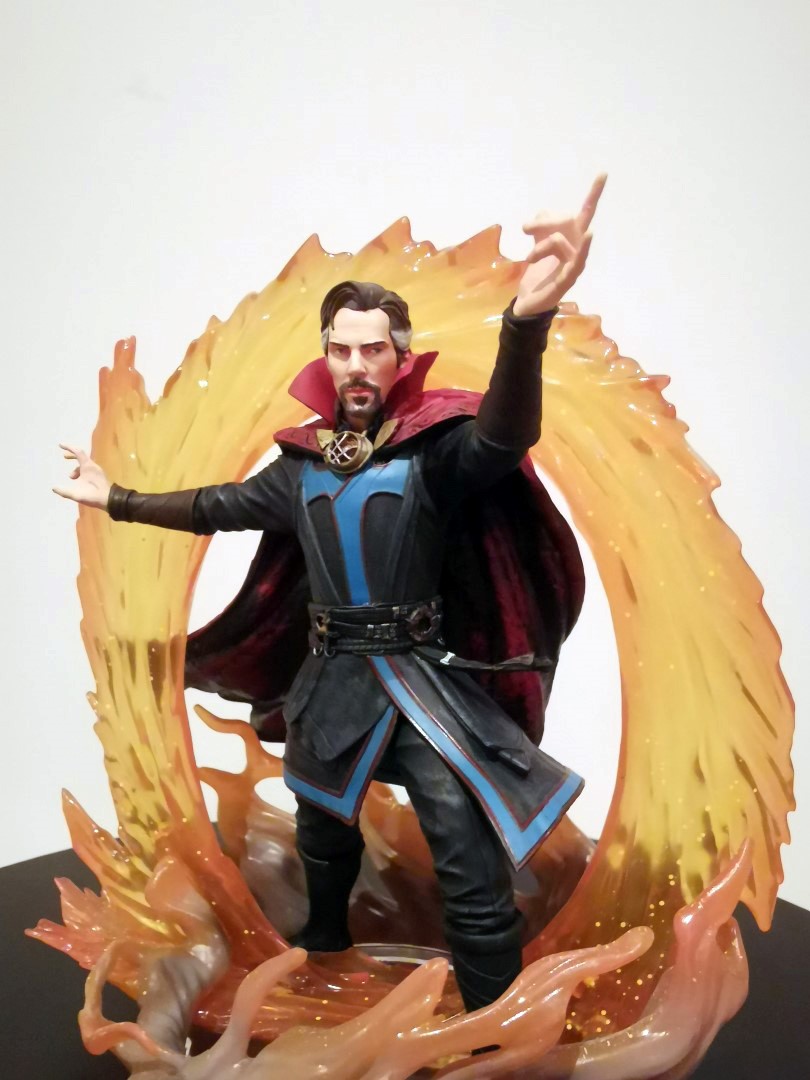 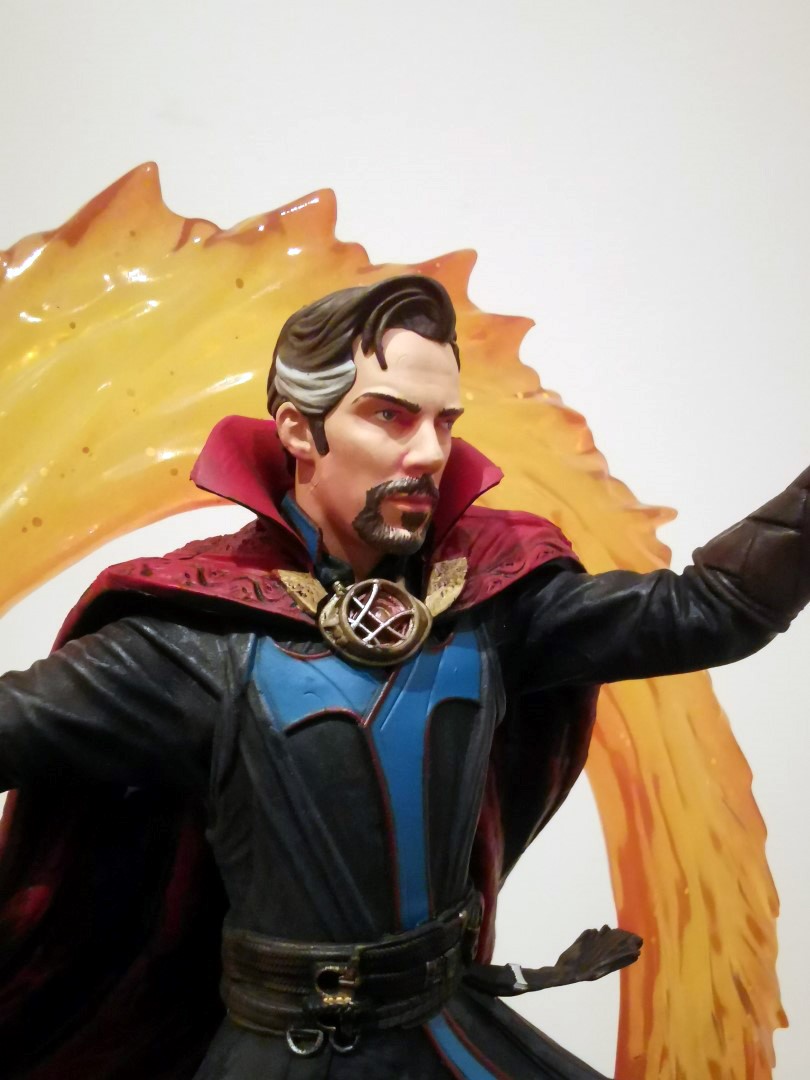 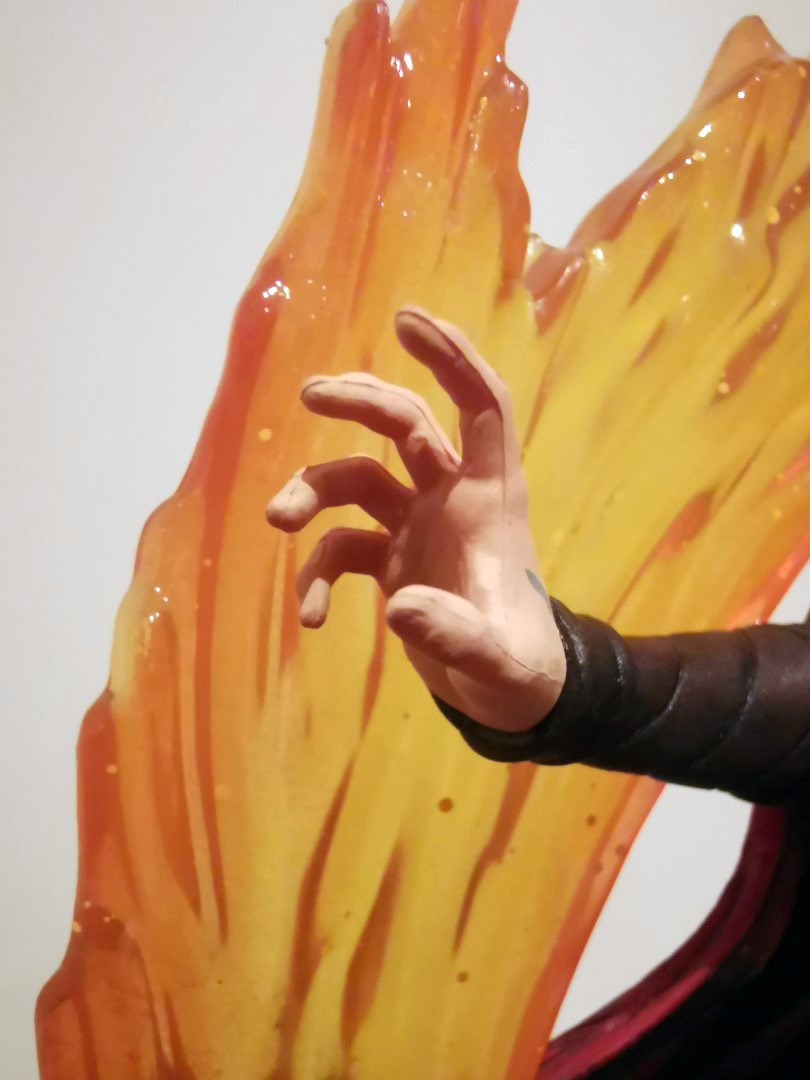 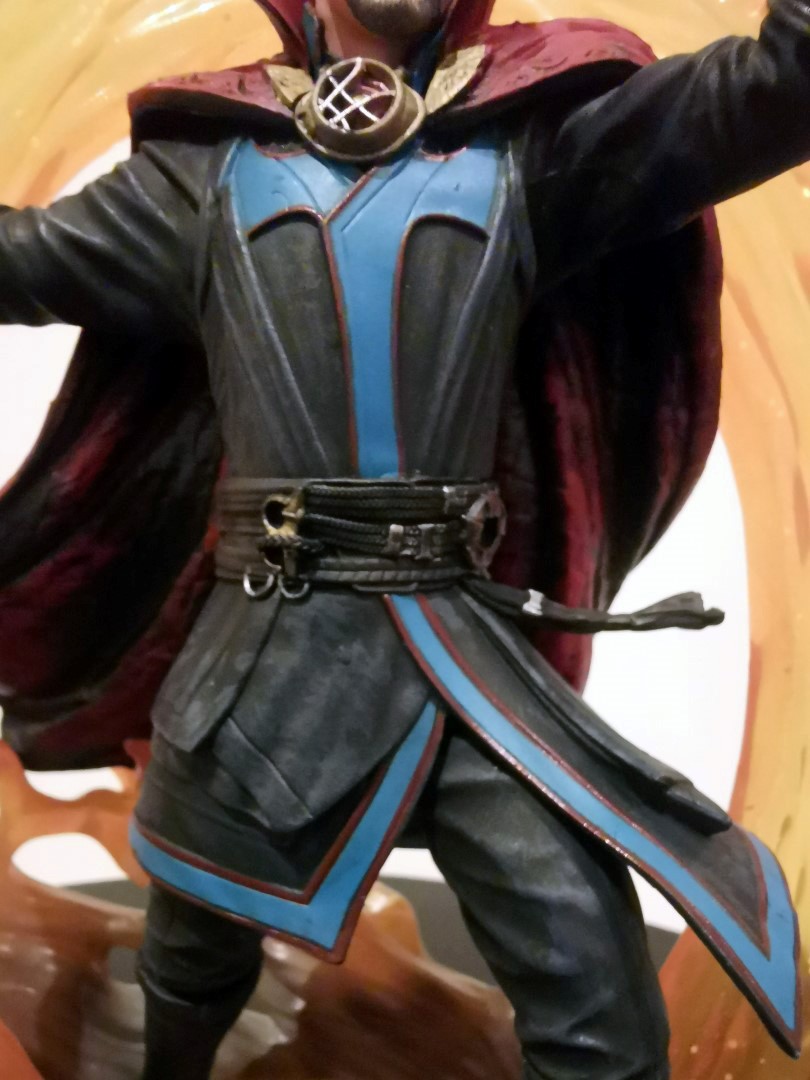 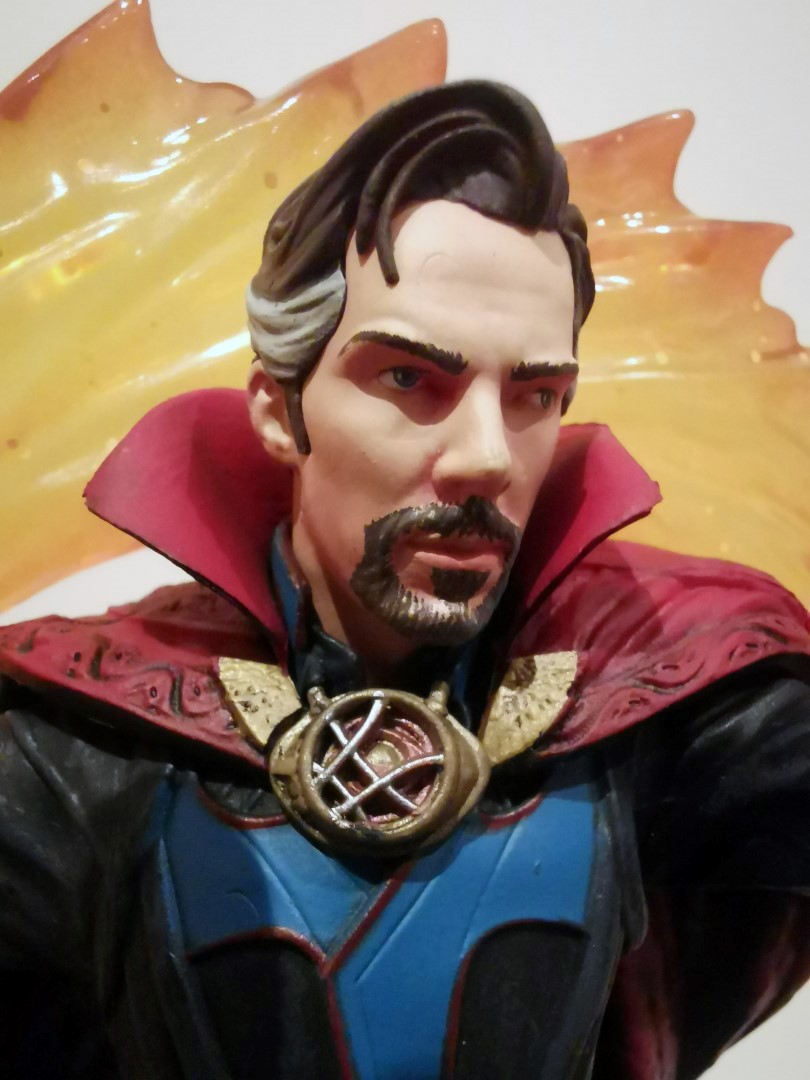 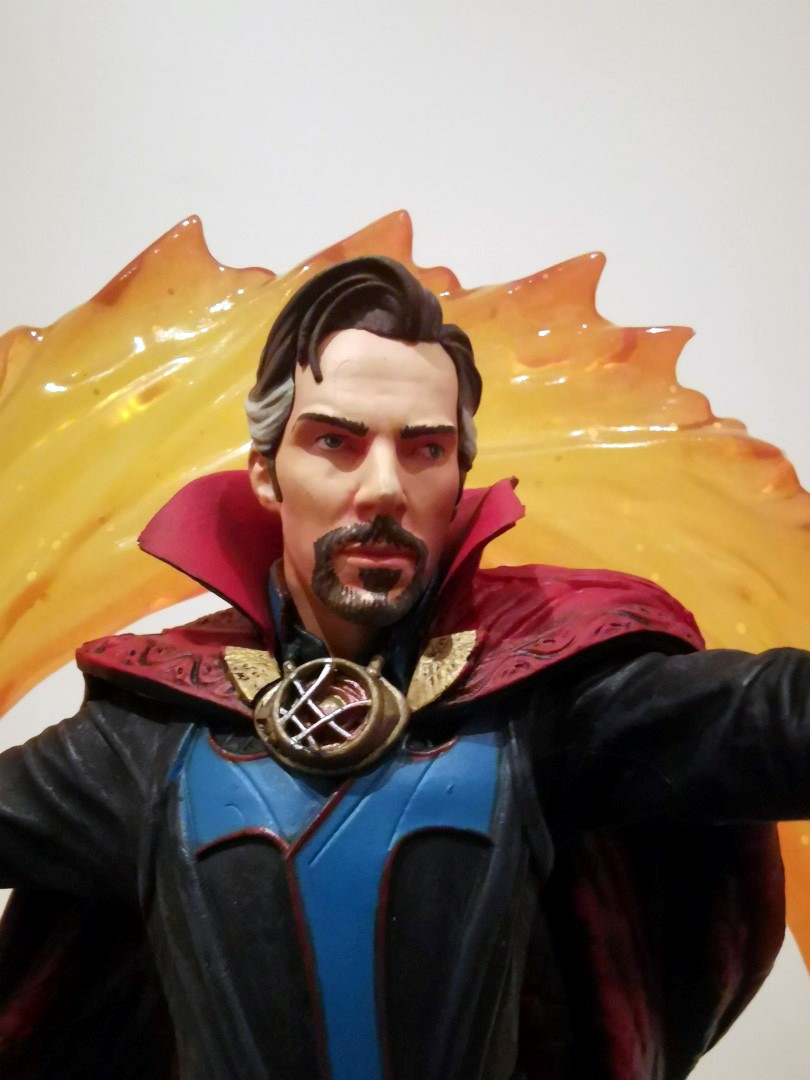 Once out of its packaging because both toys and statues should be proudly displayed without their protection, you immediately notice the excellent attention to detail of this sculpt, including the “paint job” which makes this product feel more akin to something from Sideshow Collectibles opposed to a $49.99USD (Jan 2023) statue.

The statue is made from Polyvinyl chloride (PVC) and while lightweight, still has some weight to it that easily allows for placement of this 9″ of this diorama that captures a moment of Doctor Strange creating an inter-dimensional portal. As mentioned, this statue screams Benedict Cumberbatch and the likeness is quite remarkable. Further the pose of Doctor Strange again captures the power and sorcery behind this Marvel comic book characters which was created by the legendary Steve Ditko.

While made from PVC, the colouring is exceptional as is the detail such as the texture on the clothes or the The Eye of Agamotto. I also like the flowing effect of the clothes and how the portal swirls (and almost glows) around him. It’s also quite a sturdy statue and the base nicely holds it all together.

“At the root of existence, mind and matter meet. Thoughts shape reality” …

which perfectly sums up the detail and transformation of this statue from Diamond Select Toys.

All in all a must have for all fans of this character or the film! 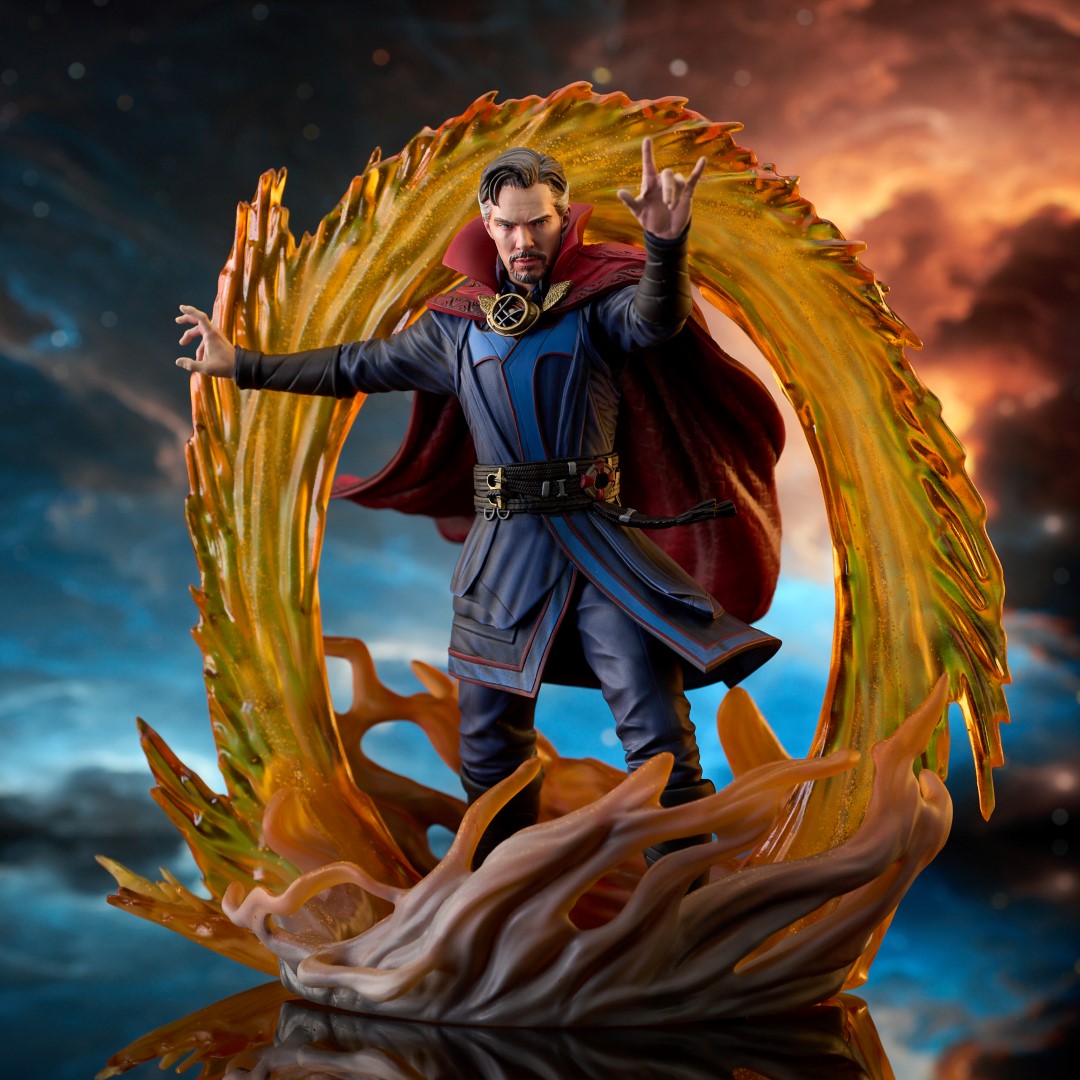 A Diamond Select Toys release! Prepare to enter the Multiverse! Doctor Stephen Strange steps through a mystical portal in this all-new Gallery Diorama, inspired by the next entry in the Marvel Cinematic Universe! With orange energy whirling around him, cape flapping in the wind, the Sorcerer Supreme stands approximately 10 inches tall and features detailed sculpting and paint applications. It comes packaged in a full-color window box. Sculpted by Gentle Giant Studios! (Item #MAR222297, SRP: $49.99) 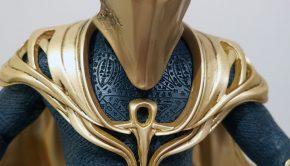 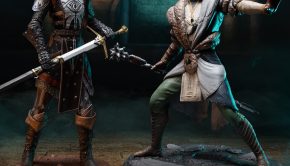 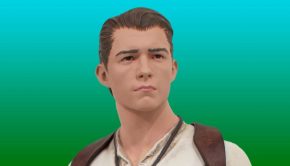