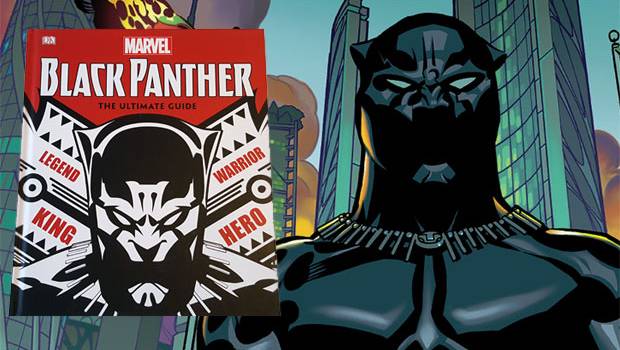 This extremely well published hardcover book from DK is all about the world of Marvel’s Black Panther and with the movie of the same name coming out in 2018 about this superhero, this is the perfect jumping on point for readers wanting know more. This book boasts a plethora of Black Panther information from his original appearance from 1966, all the way up until the present as it explores his allies, foes and key stories of the king of Wakanda’s history such as “Panther’s Rage” and “Secret Invasion”. 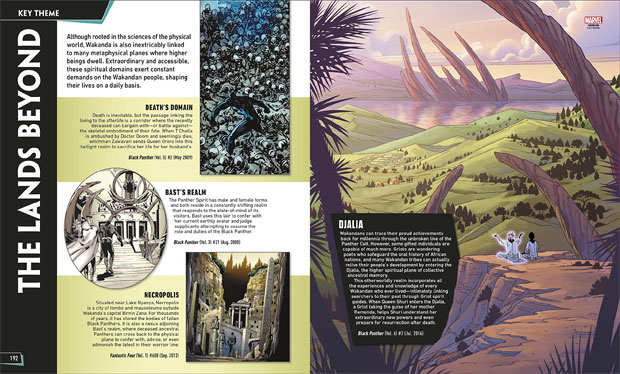 Marvel Black Panther The Ultimate Guide is written by walking comic encyclopedia Stephen Wiacek (Ultimate Marvel) who really celebrates the diversity of this character and captures the essence of Black Panther through the ages. Furthermore, it features a forward by legendary writer Don McGregor who was responsible for modernizing Black Panther in the 1970’s as opposed to just making another clichéd character of diversity but rather, one of importance to the world of Marvel that resulted in positive change through the industry. He also talks about how he channeled the inner voice of T’Challa and addressed racism at the time. 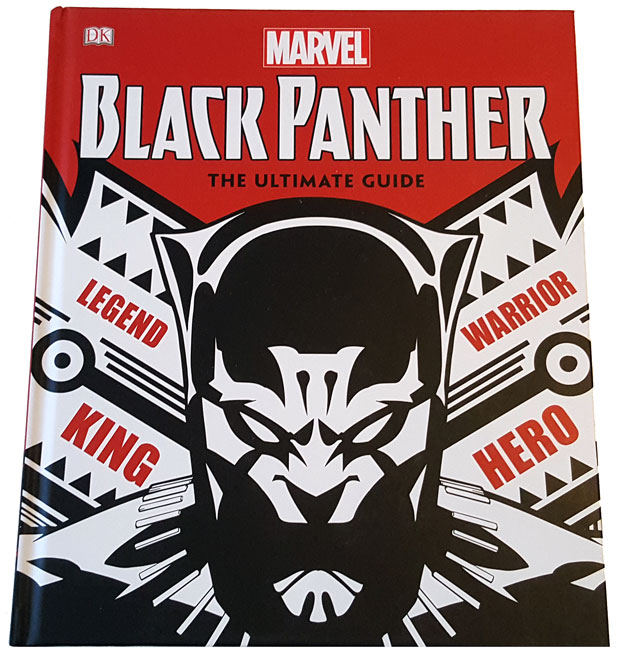 Marvel Black Panther The Ultimate Guide is also split into the following sections;

The character was birthed during a time of great change in the U.S. and interestingly, Black Panther has been around for over 50-years in the Marvel Universe. Black Panther was also created by two legendary names in comics, Stan Lee and Jack Kirby which is showcased in this hardcover book. Furthermore, it contains a detailed timeline of the character. I also like how the book highlights the key characters and stories from Black Panther’s history, including data files about the characters which include their real name, first appearance and powers/abilities. 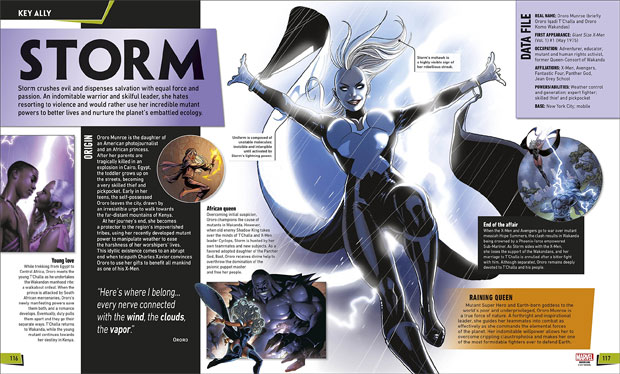 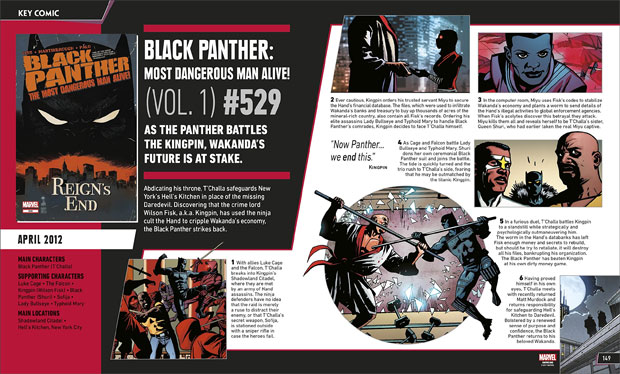 On another note, it discusses how Black Panther fits within the Marvel Universe, including meeting characters such as Namor: The Sub-Mariner or Storm whom he had a brief romantic fling with. The Key Comics highlight certain parts of Black Panther’s history such as how he battled the Kingpin who attempted to bring down the country of Wakanda.

Add in key enemies like Tetu or Zenzi and this book gives a great overview into Black Panther which is where it shines. I also appreciated how the author delved into the multiverse and showcased some of the ‘other’ Black Panthers from other universes like 1119 or 355. From Avenger to an Ultimates, Black Panther has had quite a career! 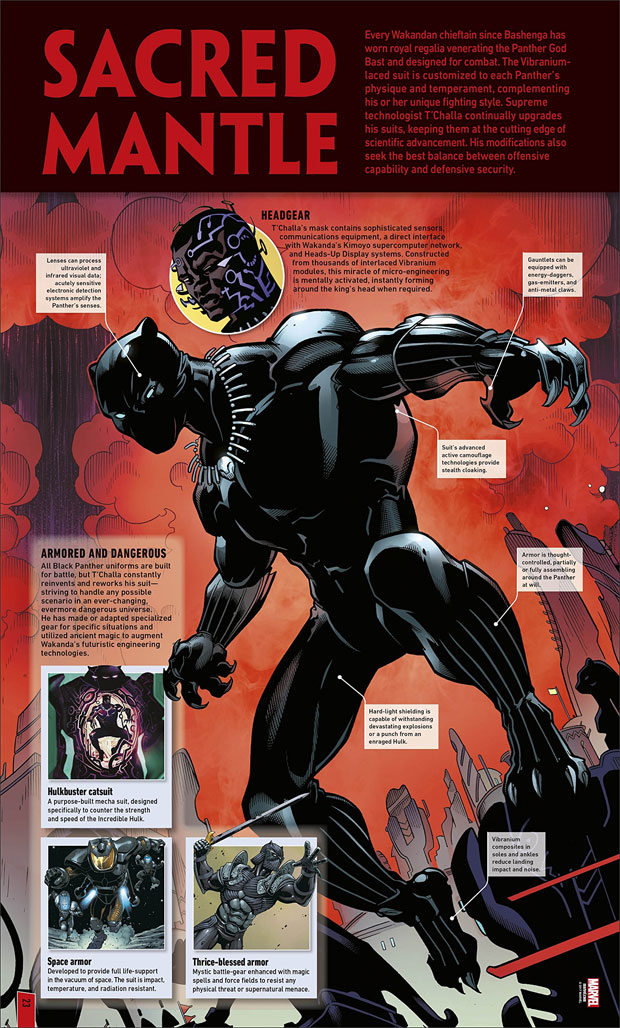 Complementing the engaging text inside this Marvel Black Panther The Ultimate Guide is the amazing imagery from Marvel Comics which adds an element of history to the character itself. By reading through this book, you can see how the character evolved from the Silver Age to the Bronze and the Modern Age. As society changed, so did comics to mirror the relevance of modernity and you can really see this character mature, including his pantheon of supporting cast and their relevance. Sure some of the changes to this character didn’t work (as with other characters) but for the most part, Black Panther came out relatively unscathed from some of the major changes in this comic universe. 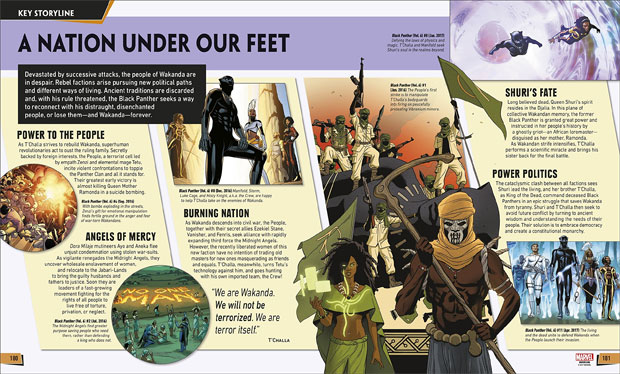 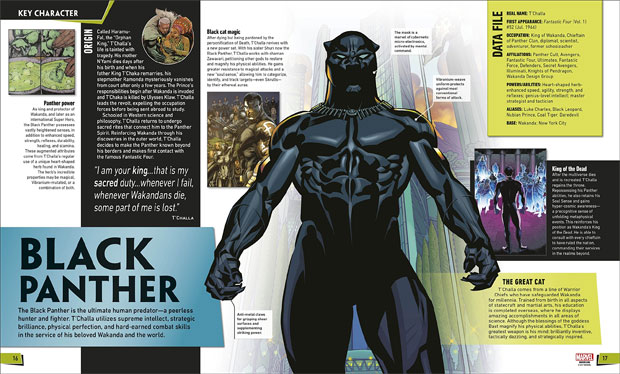 I commend DK and Marvel on this release and although Black Panther may not be as well-known as Spider-Man or Iron Man and I found this read quite fascinating as I was taken on a historical account of this character that I only knew from the last Avengers film. Given that Black Panther has a large part in the next Avengers film and with his standalone movie coming out soon, it’s definitely the perfect time to see what makes this character tick. 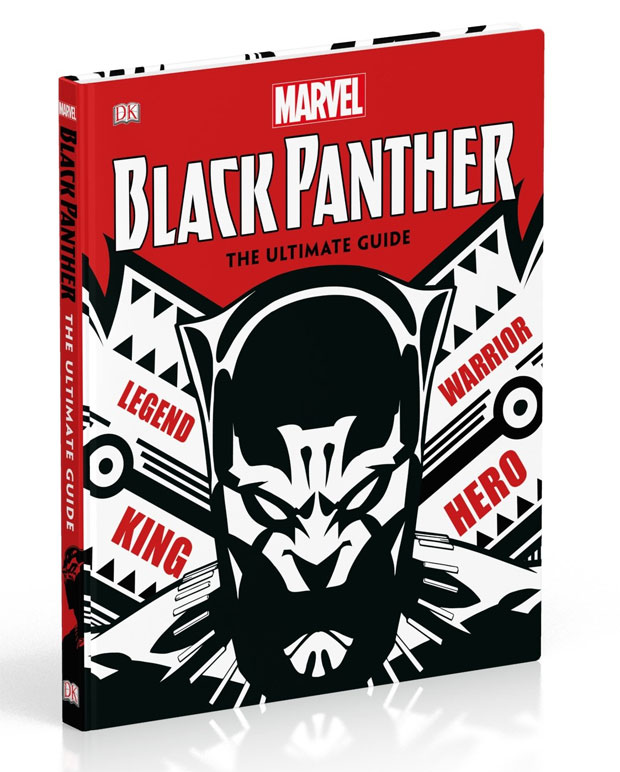