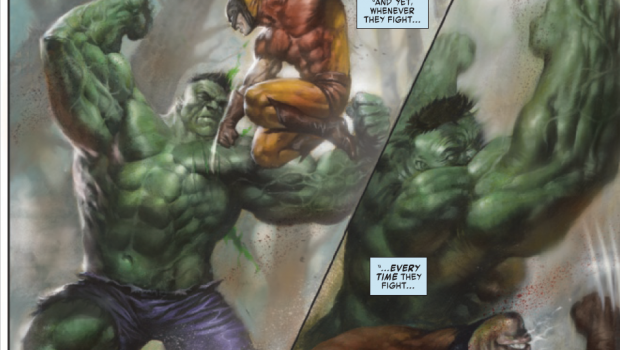 Summary: Worth a look for fans of more high-concept art books involving the Marvel universe characters.

This is the fifth instalment of an anthology of stories by Marvel characters with a loosely connected overall story. You would have to have read the rest to get the bigger story, but the stories inside this issue are Dr Strange’s assistant Wong helping some amateur magicians, Nick Fury on the last day of World War II and the Hulk and Wolverine having a battle.

While this is sold as a high concept art piece I am sure there are a lot of art books already from Marvel. There is plenty of scope for different art styles in comics but they have made a point of mixing it up in this series. I have seen anthology collections using multiple artists within the same story and it does not work as well as it confuses the message. In this case it works as they are different stories and it suits each story.

My favourite action wise would be Hulk vs Wolverine, the best story is the Nick Fury one and the most “out there” one in the one with Wong in the alternate dimension.

I would recommend this one to people who want something more high concept and are familiar with these characters already.