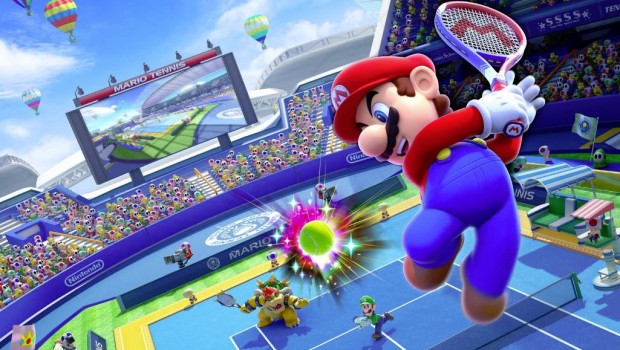 23rd October, 2015 – Coming exclusively to Wii U on November 21st in Australia and New Zealand, Mario Tennis: Ultra Smash offers brand new fun for court competitors, including the ability to team up with amiibo. Supported amiibo* can be your partner in online doubles matches, or join you to battle strong computer-controlled opponents in the offline Knockout Challenge mode. The more matches your amiibo plays, the more experience it’ll gain, becoming a uniquely powerful team-mate as its abilities increase over time.

New faces like Rosalina also hit the courts, along with returning characters like Luigi, Waluigi, Boo and more for tennis with a distinct Mushroom Kingdom twist. On top of standard shots like topspin, lobs, slices and more, the new Ultra Smash move sees characters leap high into the air and smash the ball down to devastating effect. Adept tennis tacticians can also gain the advantage by hitting the right shot while standing in the coloured Chance Areas that occasionally appear, unleashing super-strong smashes or bamboozling slices to flummox adversaries on the other side of the net.

Using a combination of controllers including the Wii U GamePad, Wii Remote, Wii U Pro Controller and Classic Controller Pro, up to four players can get together in supported modes for lively tennis battles. And with a choice of camera angles, there’ll be no more defeats blamed on having to play on the far side of the court – the TV and GamePad screen can each show a different end of the court, so both teams will always have the perfect view.

An array of gameplay modes offer plenty of opportunities for tennis tomfoolery:

• Knockout Challenge: Tense tiebreak matches against increasingly difficult computer-controlled opponents await in this single-player mode. If the going gets too tough, you can call in a supported amiibo as your doubles partner.

• Mega Battle: Your character grows to gigantic proportions after grabbing a Mega Mushroom, dominating the court with their increased power and range. When rivals on both sides of the net are giant-sized, anything can happen!

• Classic Tennis: For those who prefer their tennis a little more traditional, Classic Tennis offers two variations: Standard mode features Chance Shots and Jump Shots but no Mega Mushrooms, while Simple puts competitors between the tramlines with no Chance Shots or power-ups – a real test of tennis prowess.

• Online multiplayer: Go up against distant adversaries from all over the world in competitive ranked play in either Mega Battle or Classic Tennis modes, or quickly jump into more casual matches. Two players on the same console can team up to take on all-comers, or a supported amiibo can join you on as your doubles partner on the online courts.

As a limited launch offer, anyone who purchases Mario Tennis: Ultra Smash from Nintendo eShop in its first four weeks on sale will receive a download code for the Nintendo 64 game Mario Tennis on Wii U Virtual Console. This N64 title not only kick-started Mario’s tennis career, it also introduced the world to Waluigi for the very first time.

Compete to see who the top seed is in your household, train up a compatible amiibo as a powerful doubles partner and match up against online opponents in Mario Tennis: Ultra Smash, coming to Wii U in Australia and New Zealand on November 21st. Two colourful new controller designs – Wii Remote Plus Toad and Wii Remote Plus Bowser – will also be available on the same day. To get a taste of the tennis action, check out the Mario Tennis: Ultra Smash trailer!