Summary: A rush of humor, tactical brilliance, and unbridled joy make Sparks of Hope one of the best of the year.

Rarely has a game combined charm, humor, fantastic gameplay, and unanticipated delight as well as Mario + Rabbids Kingdom Battle, the unlikely collaboration between Nintendo and Ubisoft. Five years later, Mario + Rabbids Sparks of Hope, Kingdom Battle’s long-awaited sequel, has finally arrived alongside its lofty expectations. I am happy to report Sparks of Hope takes all the best qualities of its predecessor, makes savvy improvements, and finds itself in the conversation for one of the best on the Switch.

Picking up two years after Kingdom Battle’s conclusion, Sparks of Hope opens with Mario and the residents of the Mushroom Kingdom peacefully coexisting with the eccentric Rabbids. It’s not long before a new threat known as Cursa threatens the Mushroom Kingdom, and our heroes must venture into space to combat Cursa and save the galaxy. 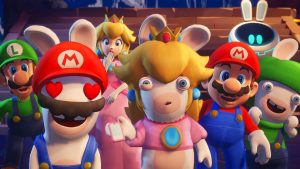 Though the plot is relatively standard, the incredibly charming and exuberant cast of characters more than makes up for it. Featuring returning favorites such as Rabbid Peach, a devious creature obsessed with social media, or newcomers such as Edge, a mysterious and surprisingly cool rabbid somehow connected to Cursa, seeing the characters’ whacky and hilarious interactions gives Sparks of Hope an exorbitant amount of personality that never runs dry.

Sparks of Hope is a joy to experience both in handheld and docked mode – its bright splashy colors pop off the screen, and each world is intricately designed to effectively encourage exploration. And featuring a dream team of video game composer masterminds in Grant Kirkhope, Yoko Shimormura, and Gareth Coker, Sparks of Hope’s soundtrack is overflowing with triumph, adventure, and jubilation – undoubtedly one of the best in recent memory.

The main gameplay difference between Sparks of Hope and Kingdom Battle is the characters’ traversal on and off the battlefield. Gone are the linear overworlds, replaced by large open areas filled to the brim with puzzles and side quests for the player to tackle at their leisure. Side quests are heavily encouraged due to their rewards – such as new sparks, weapon skins, and valuable experience points – and present interesting and unique combat situations. And though the puzzles are never overly complicated, they are a nice break from combat. 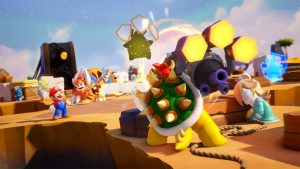 Then there are the battles, which are tactical combat at its finest. Characters are no longer limited to a grid for traversal, and can freely make their way through their movement zone while deciding their next action. Not only does this make the turn-based combat feel more alive and allow the player to freely swap between fighters before deciding their best option, but it also allows characters to dash into enemies like Goombas or Bob-mobs, the latter of which can be hurled at enemies to create an explosion area damaging all in its wake.

Characters have two action points per turn to either attack, utilize a special ability, activate a spark, or consume an item. Each fighter’s main attack weapon is incredibly varied – from Mario’s dual welding pistols which allow him to target multiple enemies, to Luigi’s long-range gun, and Bowser’s incredibly satisfying bazooka, these weapons make every character feel unique and perfectly reflect their personalities. Special abilities are equally robust – need some defense buffs? Peach is your gal. Low on HP? Give Rabbid Peach a call (she’s always on her phone).

Sparks also provide fighters with special abilities but can be freely switched between characters. Ranging from providing elemental damage to target enemies’ weak points to summoning additional fighters, to reflecting enemy attacks, the sparks can make a huge difference in battle if correctly employed. With over thirty sparks to unlock over the course of the game, there is limitless potential for experimentation. Sparks can also be leveled up by feeding them star bits to create even more powerful abilities – Rabbid Mario’s close-range combat combined with Starburst, which once fully leveled up increases attack by fifty percent, can decimate an entire group of enemies. 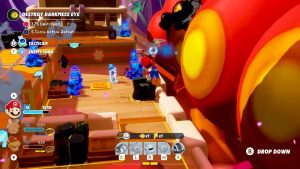 Providing even more character customization is the skill tree. Upon receiving skill points after leveling up, players will be able to increase their attack range, power up their abilities, increase their healing potential, and a bevy of other options. But what makes the skill tree unique is that skill points are not locked into an ability once used and can be redistributed based on the situation. For example, if a battle requires the player to take out a large hoard of enemies, then increasing attack power might be a solid option. Or if confronted with a “reach area” mission, which requires one fighter to get to a specific point on the map, then increasing movement capabilities would be a good call. All this to say characters can be molded into many different archetypes depending on play style preferences – Edge can either focus on increasing her flying sword attack for mid-range combat or increase her dashing capabilities to make her a close-range threat.

Aside from the occasional frame rate drop, Sparks of Hope runs very well overall, but the game’s greatest hindrances are the loading screens, which are very frequent and last a bit too long – most notoriously when switching between the pre-battle menu and the character select screen. It’s pretty common to switch between these screens multiple times to decide which characters or sparks to use depending on enemy weaknesses and battlefield layout, and it all adds up after a while.

It is still hard to believe the residents of the Mushroom Kingdom and the Rabbids can live so harmoniously in the same game, but much like its predecessor, Sparks of Hope defies all expectations and provides a constantly delightful and rewarding experience on all fronts. Armed with delicious combat, swelling music tracks, and overflowing charm and hilarity, Sparks of Hope is one of the finest games of the year. 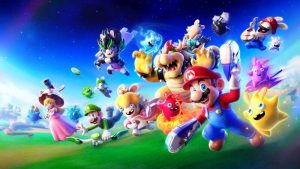