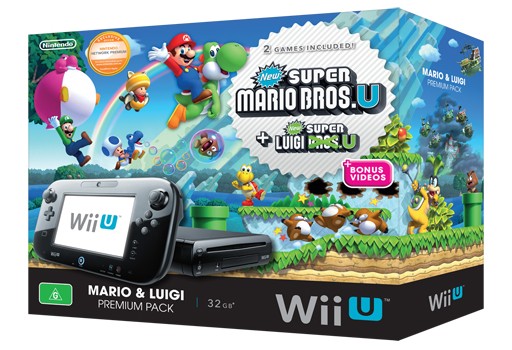 11th October 2013 – The lead up to Christmas is set to be an exciting time for fans looking for value and variety in their gaming, with the announcement of a new Wii U hardware bundle releasing on 7th November. The new bundle combines both New Super Mario Bros. U and New Super Luigi U in a special one game disc offering.

On 7th November, the release of the Mario & Luigi Premium Pack will offer both New Super Mario Bros. U and New Super Luigi U packaged as a ‘2 in 1’ disc alongside a black Wii U console with 32GB* of storage, plus a black Wii U GamePad controller. In New Super Mario Bros. U run, leap and stomp your way through a giant world map full of challenging courses and a variety of gameplay modes to sharpen your platforming skills. In New Super Luigi U, although the games basic play styles are the same as New Super Mario Bros. U, the 82 courses on the World Map have been replaced with brand new ones especially for Luigi. Containing seemingly improbable jumps, formidably hidden Star Coins and a time limit of 100 seconds to complete each course it’s going to be one speedy adventure.