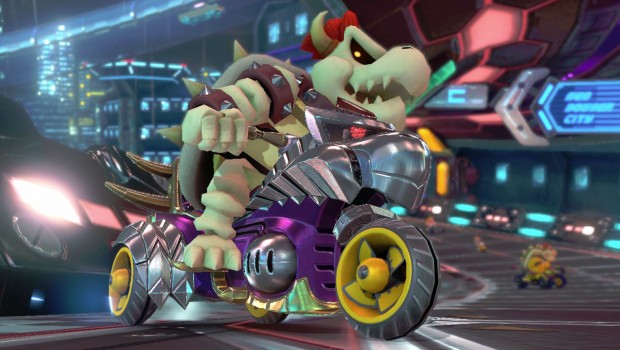 On the same day, a free downloadable game update for all Mario Kart 8 owners will enable – for the very first time in the Mario Kart series – races in a new super-speed 200cc racing class, allowing players to experience the game’s different courses in a whole new way, and re-think their victory strategies accordingly. To add to the feeling of racing at chaotic speeds, watch the sparks fly as Mario and others need to brake round those tight bends! In addition, the update will bring unlockable Mii racing suits for the following 9 amiibo characters: Wario, PAC-MAN, Olimar, Bowser, Sonic, Toad, Villager, Rosalina and Mega Man. Players can tap these amiibo figures to the Wii U GamePad to outfit their Mii characters in Mii racing suits themed to these famous gaming icons.

Since its launch in May 2014, Mario Kart 8 has sold over 4.77 million copies* worldwide and was nominated last year for numerous multi-platform ‘Game of the Year’ awards, with its blend of intense racing, beautifully-rendered courses, and much-loved characters. With the release of the upcoming DLC pack alongside a free update, Mario Kart 8 is set to offer yet more options for players to enjoy its unforgettable gameplay.

To purchase Mario Kart 8 DLC Pack 2 prior to its 23rd April release, users with a wireless broadband Internet connection can click the ‘Shop’ icon in the game or visit Nintendo eShop on Wii U. The pack is priced at AU$10.00 (NZ$14.00), or AU$16.00 (NZ$20.00) to purchase both DLC Packs 1 + 2, with Pack 1 featuring crossover characters and courses from The Legend of Zelda series. Any user purchasing both DLC Packs 1 + 2 can get access to 8 different-coloured Yoshis and 8 different-coloured Shy Guys that can be used right away.

For the full lowdown on this upcoming content coming to Mario Kart 8 during 23rd April, a new trailer can be checked out on Nintendo’s official Facebook Page.